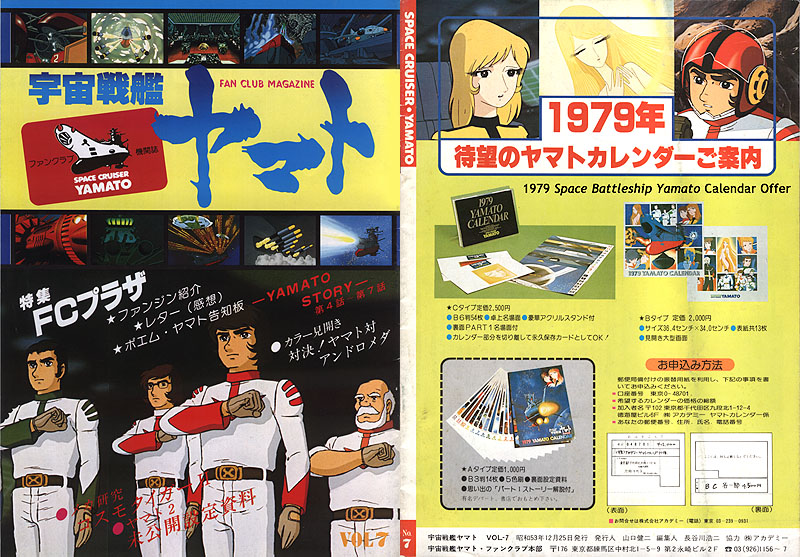 Issue #7 of the Space Battleship Yamato Fan Club Magazine was published in December, 1978. This was a tremendously exciting time to be a Yamato fan. Farewell to Yamato had run its course in movie theatres by this time, and the Yamato 2 TV series had made its debut. This massive double-assault had the effect of establishing Yamato as a saga rather than a single story, and it opened up a promising future in which anything could happen. Fan Club Magazine #7 reflected this by turning over most of the issue to fan activities, recording the surge of new private clubs in addition to covering the first few episodes of the new TV series.

There were a lot of topics for fans to chew on. The passion ignited by Farewell was absolutely unprecedented. Its production values distinguished it as the definitive Yamato story, a high-water mark that everything else would have to live up to. When Yamato 2 appeared (two weeks before Farewell closed in theatres), it roughly divided the fans into two camps; those who considered it an alternate version of the greatest movie ever made, and those who considered it an inferior version of the greatest movie ever made. As time went on, just about all of them migrated to the first camp. But when this issue was published, Yamato 2‘s fate was still up in the air and opinions were flying furiously.

Internet message boards were still over a decade away, but as you will see, the energy that fuels them today was more than abundant in 1978.

Featured below is translated text for all the major articles. Translation by Earnest and Sumiko Migaki, edited by Tim Eldred. 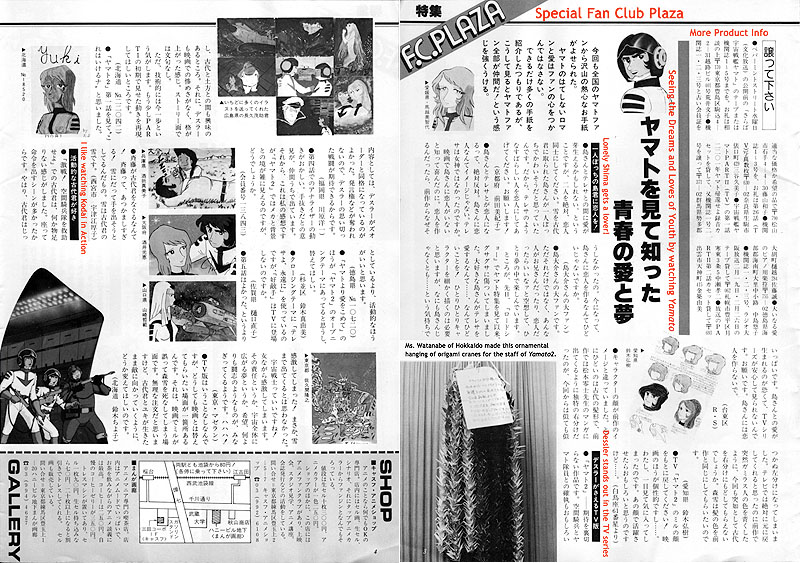 Seeing the Dreams and Loves of Youth by watching Yamato

We’ve received a lot of passionate letters from Yamato fans around the country once again. Yamato‘s love and romance has gripped the hearts of the fans and doesn’t let go. Although we’d like to show you as many of these letters as possible, when it comes right down to it, we’re all united as Yamato fans.

Lonely Shima gets a lover!

“Please make sure to bring both Shima and Teresa together as lovers! Yuki was taken by Kodai, so it’s just cruel to keep Shima alone like that. So please, I beg you, allow Shima to have the fabulous Teresa as his lover!”
– a fan from Kyoto

“I’m against the idea of having Shima and Teresa as lovers. Wasn’t Teresa supposed to be a Goddess? She just doesn’t make a perfect match with Shima as her lover. I was glad he didn’t have a lover in the movie. If he’s gonna have a lover, why didn’t you guys mention it in the previous production? I just can’t understand why you’d introduce a lover now.”
– a Super Fan of Shima Daisuke

“I’m a great fan of Shima Daisuke. I often wished I had him for a big brother or even as a lover. However, when I saw the episode of Yamato 2 the other day, it was really annoying. How could you hook up my darling Shima with Teresa? I know you have to fill in the details for each character, but why did you have to go and do that to Shima? I don’t think I can watch the TV series knowing he has a lover. So please, don’t add a lover to Shima’s life.”
– R.S. of Taito-ward

“The characters’ faces are different from the previous production. Kodai’s was particularly bad. They originally used Leiji Matsumoto’s manga drawing for the model and separated Kodai’s hair to the right. This time they shifted his hair to the left. For the TV series make sure you return his hair to the right, like it was in the original. And also, while you’re at it, change Yuki Mori’s hair color back to what it was before.”
– Suzuki of Aichi Prefecture

“Please change Miru’s face from the Yamato 2 TV series back to the original! The movie version was so much better. I think it’d be neat to have the movie version’s face used in the upcoming productions.”
– Cygni 61 of the Swan Constellation

[Note: Miru was the officer appointed by the Comet Empire to moniter Dessler. Star Blazers viewers know him as Morta.] 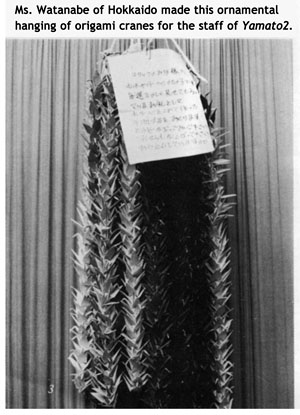 Dessler stands out in the TV series

“Yamato 2 is a worthy series. The Yamato crew and the Space Marines were interesting. Seeing Kodai and Captain Hijikata was good, and Dessler didn’t look as desolate as he did in the movie. No complaints on the storyline. But I wish you’d bring back the original atmosphere from Part 1.”
– Fan #22042 of Hokkaido

“I knew this was going to be a hit after watching the first episode. The plotline has Dessler on the same level as Zordar, and he was able to issue his commands as an equal in battle. This was good.”
– Kawahara of Fukuoka Prefecture

“Analyzer’s movements in the 4th episode were strange. My friends and I think the artwork was sloppy. But the distinction between the mecha and the background was very clear.”
– Fan #13843

“How dare Saito [Sergeant Knox] hit Kodai? And how dare he go after Yuki! Yuki is for Kodai only.”
– a fan from Nishiyama City

“The Kodai that merely sits in the Captain’s chair shouting out orders like, ‘We’re under heavy combat! Send in reinforcements to help the Space Marines,’ just isn’t like him at all. I like watching Kodai in action better.”
– Fan #10720 of Tokushima Prefecture.

“I would like to see From Yamato with Love used as the opening theme song for Yamato 2 because I think it’s a better match.”
– Ms. Suzuki of Suginami Ward

“They used Teresa Forever as the closing theme song [for Yamato 2], but I was wondering if they could use A perfect match instead?”
– Ms. Higuchi of Saga Prefecture

“I was deeply moved by episode 5. I never thought Yuki would make an appearance. And the Space Marines are so cool. As a woman, I’m really moved by them. Whether it’s their responsibility to duty, or the hope they bring, or the dreams they offer in the wide frontiers of outer space, they’re just wonderful.”
– Magellan of Tokyo

“I’ve no complaints about the TV version, but I’d like to change one part of the movie. It’s the scene where Miru inadvertently causes the death of Yuki Mori. Although I’m asking for the impossible, I’d like to have Kodai and Yuki face the enemy together alive.”
– Ms. Suzuki of Hokkaido

“Why did you change the last scene, where Kodai and Yuki ram the giant warship?”
– Matsufuji of Kumamoto prefecture

“A lot of fans out there say, ‘Don’t kill off Kodai,’ but I say why not? I like Kodai, Yuki, Shima, Dessler, Zordar, Aihara, Dr. Sado, Captain Hijikata, Sanada and all the rest, but I’m not against Kodai dying, either. If Kodai lives, then like the time when Yamato defeated Gamilas, Kodai and Yuki can live happily ever after. But I also think it’s a good idea if they became stars in the sky, watching over the earth and protecting the world. The problem is, people think Kodai’s death means the end of his existence. But everybody needs to remember that there are different ways to continue living on.”
– Ezawa of Niigata prefecture

“What I saw on TV really let me down. The characters all resembled the show, New Star of the Giants [A baseball anime series]. Why is it that the animators are all the same?”
– Name Unknown

“I heard the staff say, ‘We want to write more dramas about humanity,’ during an interview. But this expectation was a letdown, since the time allotted for this was so limited.”
– Yonamine of Kagoshima

“Yamato Banzai! I love the closing song, Teresa Forever. I also loved the vocal that was used in the first series. And in today’s episode, Earth’s crisis awakens Yamato! [episode 3], I loved the scene where Kodai and Yuki are alone in the underground city.”
– Ms Toda of Fukuoka prefecture

“Nishizaki-san, please allow Kodai and Yuki to have a wedding ceremony on the ship. I can’t help feeling sorry for Yuki if her life just ends like this.”
– Ms Nishioka of Kanagawa prefecture

“By episode 8, they’re already in a space warp. Then they’ll be at Telezart. I certainly feel that the story is going forward way too fast.”
– Ms. Utsue of Hyogo prefecture