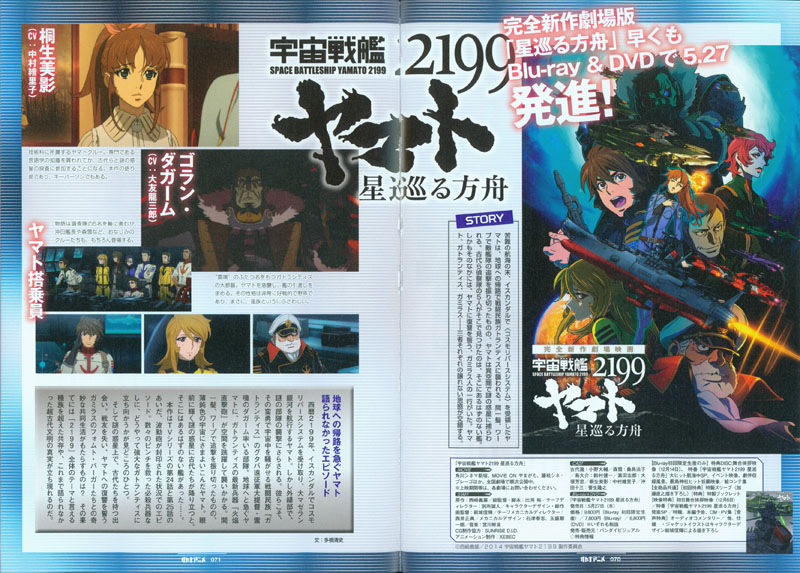 When Ark of the Stars was released, it received a favorable reception. How was this work shaped? We spoke about the making of the film with Producer Mikio Gunji, who shared with us his thoughts on Yamato. 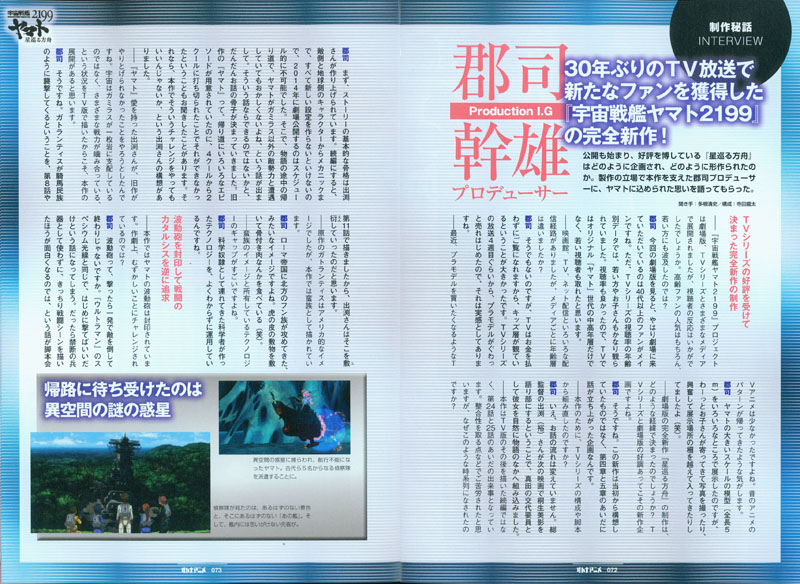 Interviewer: Space Battleship Yamato 2199 was a project that unfolded in theaters, as a TV series, and through various media. How was the audience’s reaction? There are older fans, of course, but did it spread to younger ones?

Gunji: When the theatrical editions were released, the main fans that went to see it were in their forties, as you would expect. However, the viewership data on the TV series indicated that a lot of young people and children watched it. The ratings were good, so I think TV created a younger audience as well as the original Yamato generation, middle-aged and older.

Interviewer: Besides movie theaters and TV, there were various other routes like net delivery. Was the age group different for each media?

Gunji: Not really, but since you can watch TV for free, there were a lot more kids watching at that level. Plamodel sales began to pick up from about the fourth week of the TV broadcast, so that clinched it.

Interviewer: Recently there haven’t been many TV anime that make you want to buy plamodels. I think the pattern of old anime is returning.

Gunji: The big-scale (5 meter) Yamato model was exhibited in many places. Children always get in close to take photos, and some are so excited they jump over the fence in the display space. (Laughs)

Interviewer: What were the circumstances of the process in which it was decided to produce the new feature film, Ark of the Stars? Was it a new plan based on the strength of the TV series and the theatrical version?

Gunji: That’s right. This new project wasn’t decided at the outset. Planning for the story came up between the fourth and fifth chapters.

Interviewer: Were the composition and scripts for the TV series rebuilt around this new work?

Gunji: No, it didn’t change the flow of the story. Director Yutaka Izubuchi set up Mikage Kiryu as the narrator of the movie by naturally incorporating her into the story as Sanada’s backup.

Interviewer: Rather than being a sequel to the TV series, this work occurs between the events of episodes 24 and 25. I’d think it would be hard to maintain consistency between all the points. Why was it done in this chronological order?

Gunji: First, Mr. Izubuchi built up the basic skeleton of the story. If we were to make a sequel, we’d have to create all-new designs for the characters and mecha on both the enemy side and the Earth side, which would make it impossible to show it in a theater in 2014. So the story takes place on the way home, but wouldn’t it be strange if Yamato ran into another enemy besides Garmillas? That’s what I brought up. Based on our discussions, the outline of the story was gradually decided.

Though various episodes were conceived in the original work for Yamato‘s journey home, they were aborted when the series was reduced from four blocks down to two. It was Mr. Izubuchi’s initiative to take up that challenge with this movie.

[Translator’s note: a “block” refers to a 13-episode block of episodes. As seen in our Yamato Origins series, the story was first imagined as 52 episodes (4 blocks), then reduced to 39 episodes (3 blocks) and finally aired as 26 episodes (2 blocks).]

Interviewer: Mr. Izubuchi’s love for Yamato led him to attempt what the original work could not. Rather than Garmillas’ monolithic domination of space, various forces are engaged. I think this film was developed out of the situations depicted in the TV series.

Gunji: That’s right. Gatlantis attacks like equestrian nomads. Since this was shown in episodes 8 and 11, I think Mr. Izubuchi decided to go there.

Interviewer: In the original, Gatlantis had an American image, but in this work they are portrayed as barbarians.

Gunji: They have the image of the Huns that attacked the Roman Empire. They lay on tiger-skin rugs and eat meat off the bone. (Laughs)

Interviewer: The gap between the technology and the barbarian image is great.

Gunji: The technology comes from scientists who are captured as science slaves, and they use it without understanding it well.

On the return journey, a mysterious planet awaits in a different space

1. Yamato is captured by a planet in a different space and cannot navigate. Kodai and five others are sent out as a reconnaissance team.

2. The recon team sees things they should not, including “that ship” that should not be there. And unexpected visitors have preceded them to the ship. 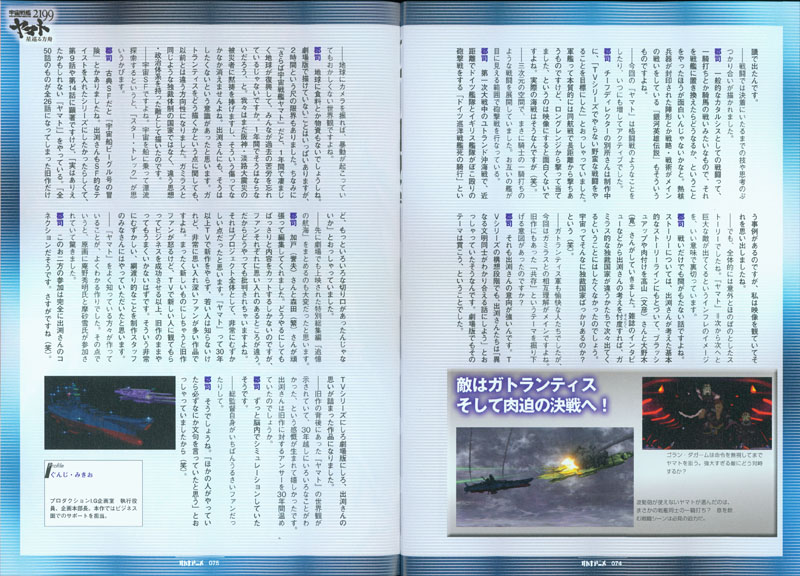 Interviewer: In this work, the Wave-Motion Gun is sealed up. That set up a difficult challenge in the story.

Gunji: If you shoot the Wave-Motion Gun at an enemy, they’re defeated and it’s all over. Just like with Ultraman’s Specium ray, people end up asking why they don’t just fire it in the first place. If it was a forbidden weapon that we couldn’t use, then it could be interesting to somehow depict tight battle scenes. That came up for discussion at the script meeting.

Interviewer: You depicted the clash of techniques and thought processes in battle that lead to the conclusion.

Gunji: Battle as a general catharsis, something like a duel or a cavalry fight. If we were to replace that with a battleship, the way it is executed could be fascinating. Formation, strategy, a sealed nuclear weapon; the main battle tactics are like something out of Legend of the Galactic Heroes, aren’t they?

Interviewer: This time, Yamato is very active in things like direct combat.

Gunji: During the production, Chief Director Bessho told me, “My goal is to pull off a savage battle that couldn’t be done in the TV series.” A warship battle is essentially a long-distance shooting competition. You fire from long range and try to hit, which isn’t very interesting when you make it into a picture. That’s what an actual naval battle is. (Laughs)

Interviewer: You can expand a single-combat duel of knights into three-dimensional space. A gun battle would be performed at both ships’ mutual visual range.

Gunji: In the Battle of Jutland in World War I, the German fleet and the British fleet engaged in an artillery battle at close range. I was reminded of that when I saw a video called Death Ride of the German Battle Cruiser.

Interviewer: But overall, it was a surprisingly heartwarming story. Yamato‘s inflationary image of huge enemies appearing again and again is cheating in a good way.

Gunji: An interval episode doesn’t usually have a battle in it. Based on the basic storyline conceived by Mr. Izubuchi, Fumihiko Takayama and Hiroshi Onogi brushed it up and fleshed it out. If we can infer Mr. Izubuchi’s feelings from magazine interviews, he didn’t want Garmillas-style dictatorships with a different look popping up one after another. Are there only dictatorships in space? (Laughs)

Interviewer: Garmillas is more pleasant than the Gatlantis army, and the main thing this time is mutual understanding with them, isn’t it? Was the intention to delve into the theme of coexistence from the original work?

Gunji: It’s also the strong intention of Mr. Izubuchi. At the planning stage of the TV series, something he said was, “Let’s try and make it a story about different civilizations understanding each other.” That theme was carried through the feature film.

Interviewer: If you turn the camera toward Earth, the appearance of the world is such that a rebellion breaking out wouldn’t be unusual.

Gunji: There would also be no food or supplies on Earth. There are many things that couldn’t be depicted in the feature film, since it was limited to two hours. By the way, after Earth’s great revival after one year in Farewell to Yamato, did everyone just forget about their past trouble? That couldn’t happen in one year. We still give silent prayers to the victims of the 2011 earthquake. Such a wound doesn’t heal easily. I think Mr. Izubuchi was conscious of the fact that I didn’t want to do that. With respect to how Gatlantis was depicted, it was different from the previous direction. Instead of another dictatorship like Garmillas, they’re shown as an enemy with a different kind of thought and political system.

Interviewer: It’s Space SF. When you talk about exploring space in a ship, I think of Star Trek.

Gunji: Or classic SF, like Voyage of the Space Beagle. Mr. Izubuchi seemed to want to make the series with that kind of SF taste, too. It’s noticeable that episodes 9 and 14 explored “the possibility of what can be done with Yamato.” He said, “The old show was a 50-episode story that became a 26-episode one, but didn’t it have openings for all sorts of things?”

Interviewer: I’d have thought that it would be difficult to put together the compilation film A Voyage to Remember, which was shown in theaters first.

Gunji: Yoshio Kato and Shigeru Morita worked hard to edit it. They had no choice but to cut content with a single stroke. Every fan has different feelings about each area, so it definitely came in for some criticism. The point is, the project was very difficult as a whole. Many young people may not know that this is the first new Yamato on TV in over thirty years, and a lot of fans have very deep feelings about it. When you make it something completely new, fans of the original get angry. But now that we’ve gotten a lot of new people to watch it on TV, it’s a successful business. That wouldn’t have worked if we just redid the original. So it is very difficult. The production staff had to walk a tightrope.

Interviewer: It’s easy to see that those who made it know Yamato well. I was surprised that Hideaki Anno and Mr. Masayuki participated in the animation.

Gunji: The participation of these two came entirely through their connection with Mr. Izubuchi, just as you’d expect. (Laughs) The TV series and the feature film are both filled with Mr. Izubuchi’s thoughts.

Interviewer: He was happy for the strong feelings that were born of fleshing out the world portrayed in the background of the old Yamato, knowing how much has changed over the past thirty years. Was Mr. Izubuchi warming up his answer to the original for that long?

Gunji: He seemed to be running simulations in his brain all the time.

Interviewer: The general director himself was the noisiest fan.

Gunji: I guess so. He told me, “If anyone else had done this, I’d probably be bitching about something.” (Laughs) 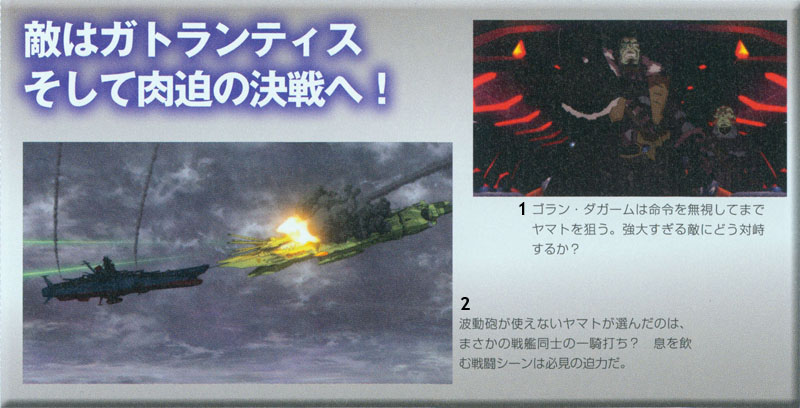 The decisive battle with the enemy Gatlantis at close range!

1. Goran Dagarm ignores an order and aims at Yamato. How do you deal with such a powerful enemy?

2. Since Yamato has chosen not to use the Wave-Motion gun, will it come down to single combat between battleships? The must-see battle scenes will take your breath away.