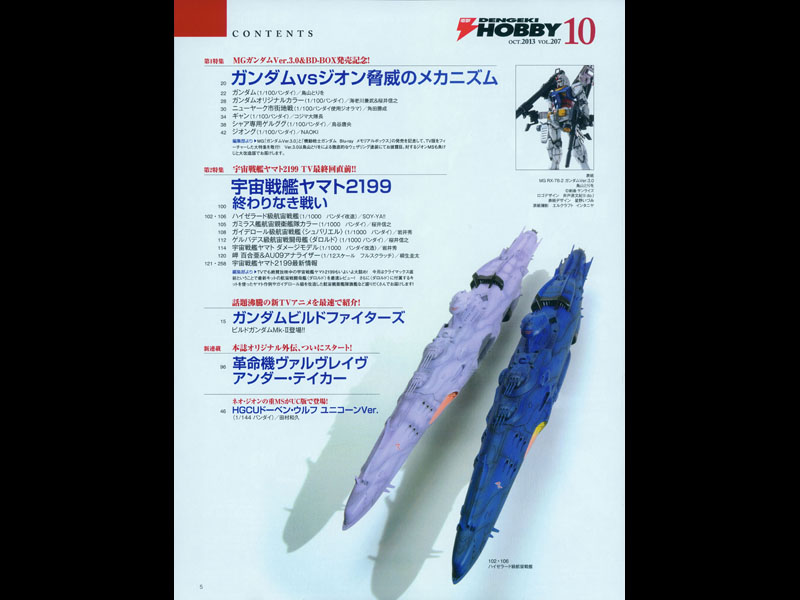 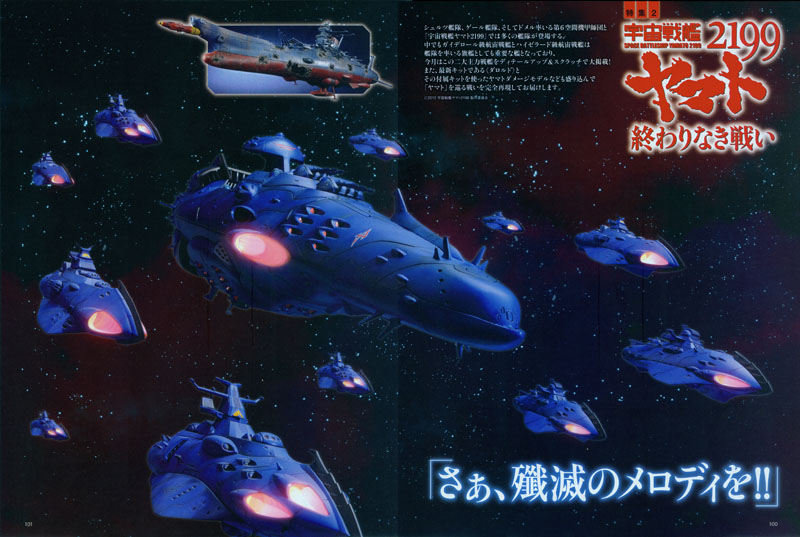 “The melody of destruction!!” 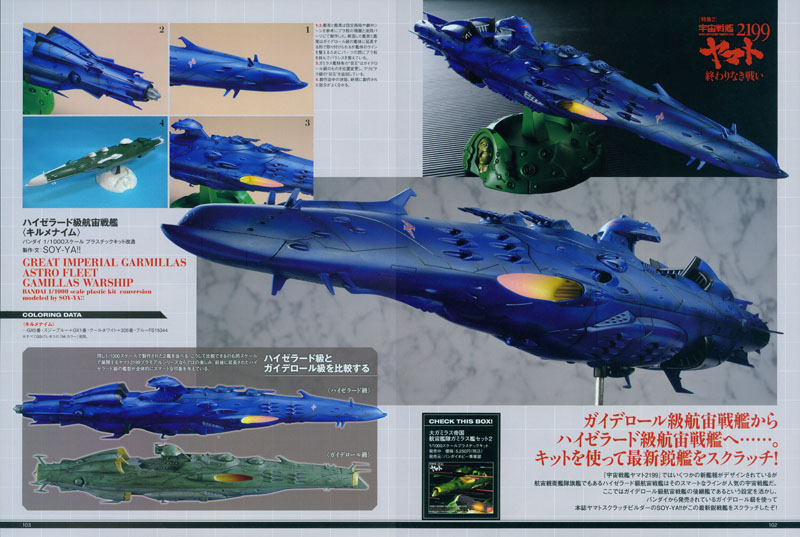 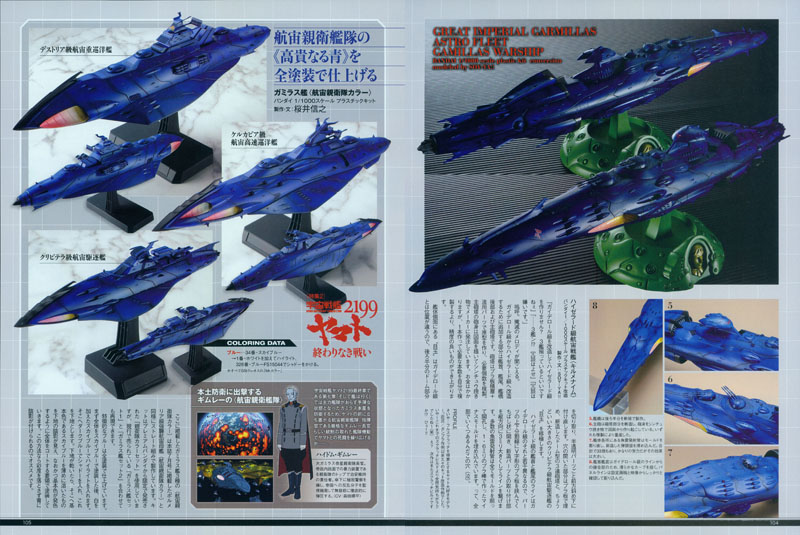 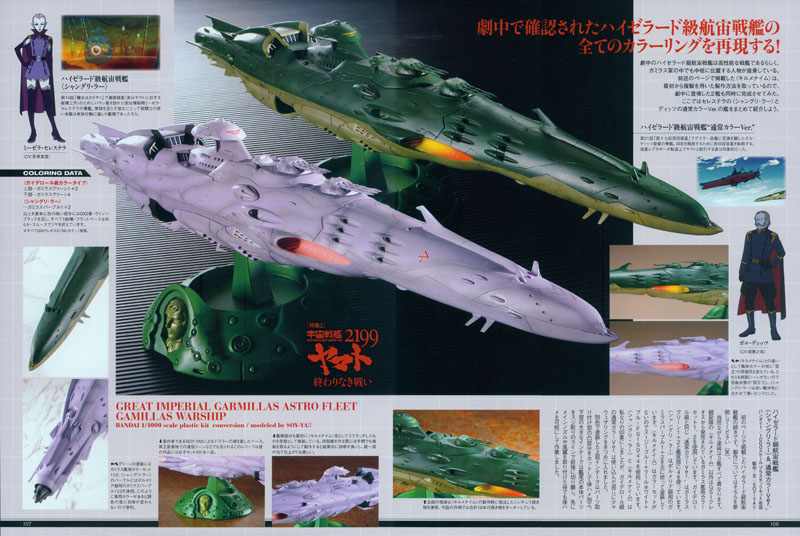 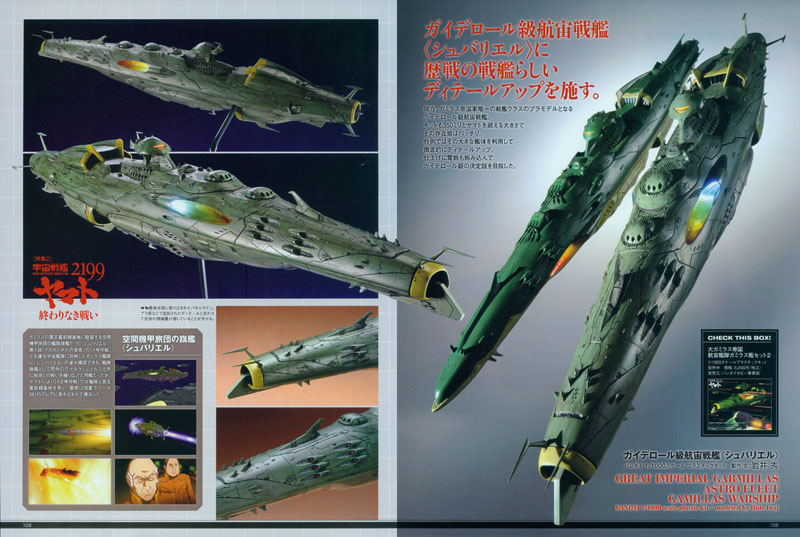 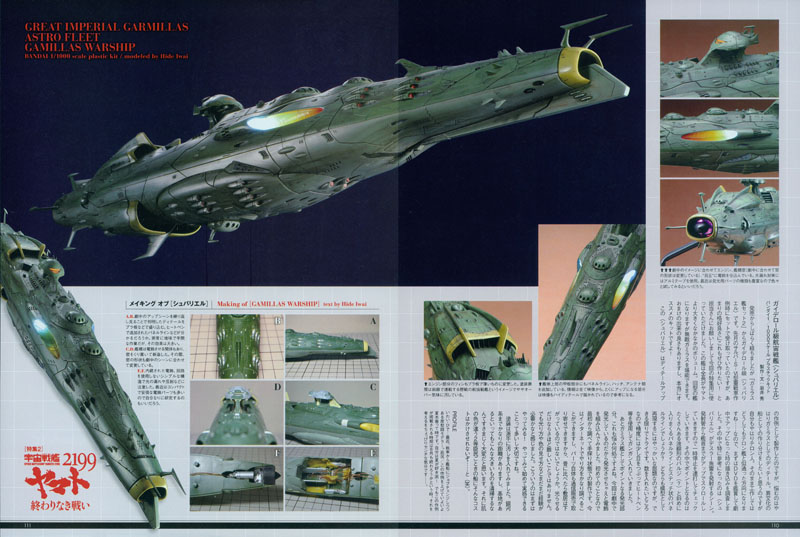 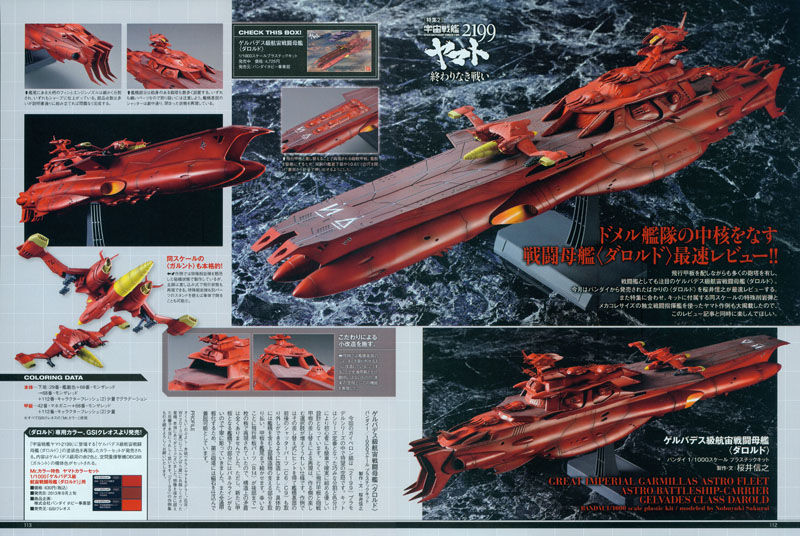 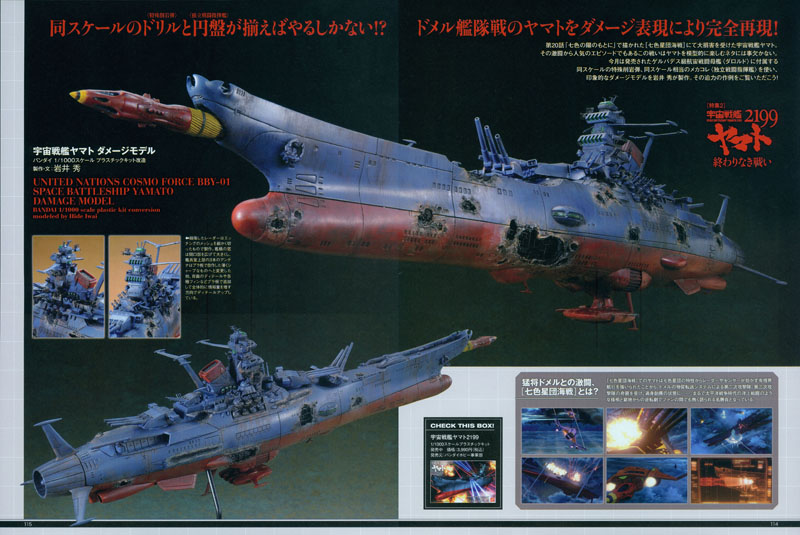 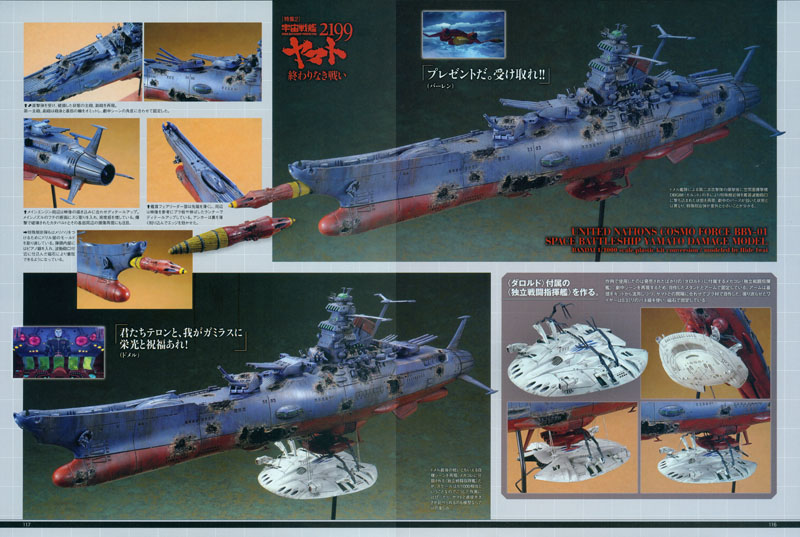 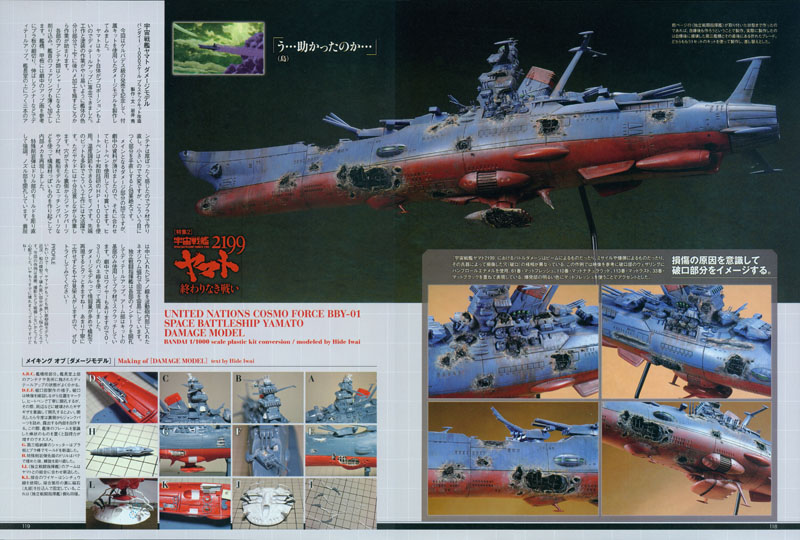 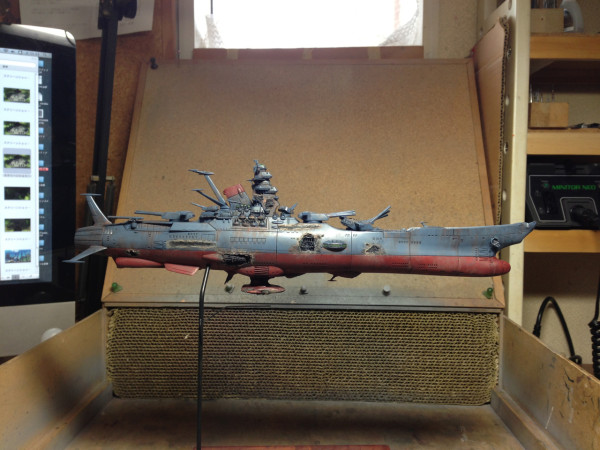 Blog photo of the damaged Yamato in the modeler’s workshop. 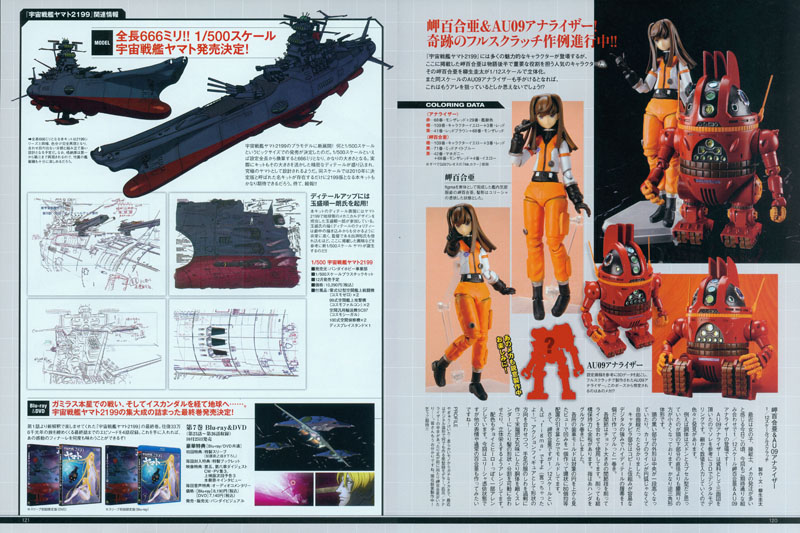 At left: news of the new 1/500 kit. At right: scratch-built action figures. 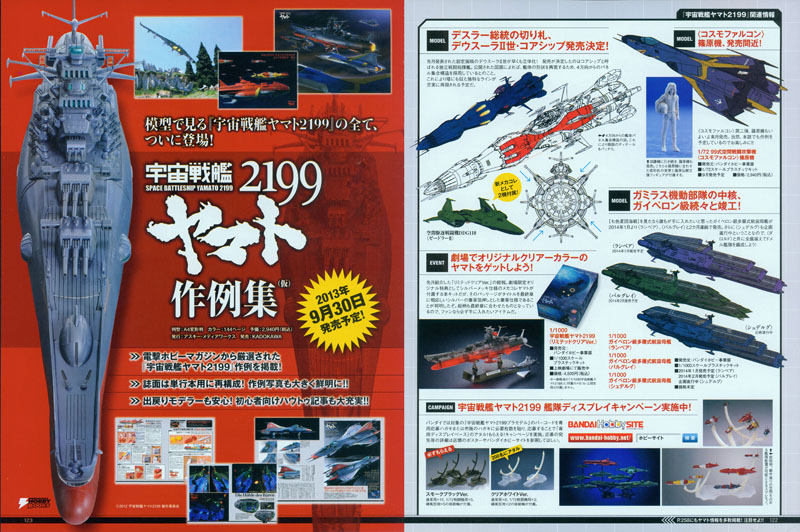 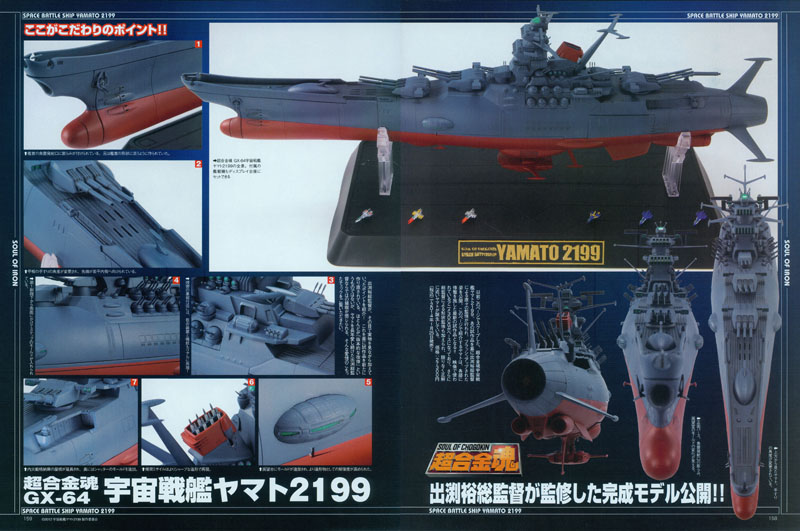 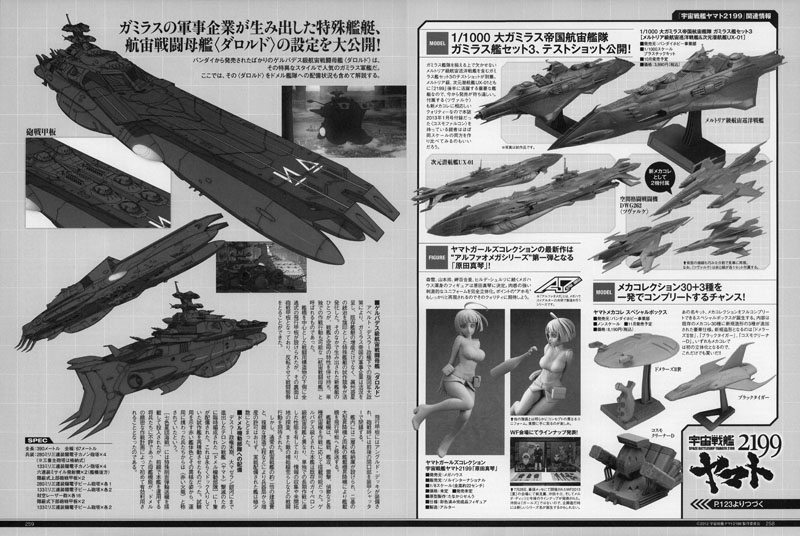 Under the territorial expansion policy of Abelt Dessler’s regime, the active military branch of the Garmillas Empire not only increased the production of existing vessels, but also the competition between provincial planets to develop special prototype vessels. Among these, one of the newly-created vessels called an Astro Battle Carrier combines the characteristics of an aircraft carrier and a battleship, giving it the ability to conduct independent operations.

Although an expansive flight deck was established below the combat structure centered on the bridge, the underside of the deck was equipped with guns and could be inverted for combat readiness. The flight deck is equipped with an angled deck, and the openings at the rear of the deck are shuttered during battle. There are two layers of hangars inside the ship; aircraft are lifted to the flight deck by two large elevators located at both port and starboard. 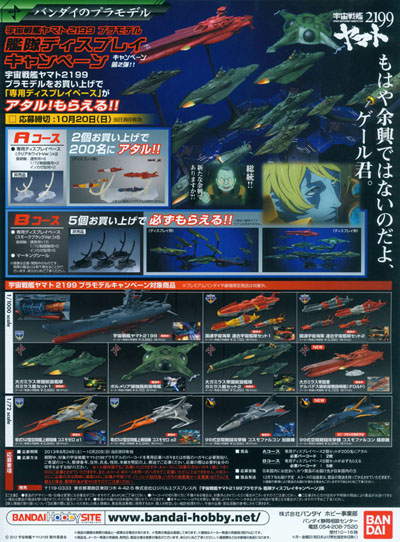 Various craft such as fighters, bombers, fast strike, and reconnaissance can be made available depending on strategy. Unlike the existing Gaiperon Class Astro Carrier, the Gelvades Class is suitable for long-term solo operations such as exploration of unknown territory, information gathering, or battle action like the breaking of enemy supply lines. However, its building costs are about double that of a conventional battleship, and the complexity of its construction process limits its production, so only a few have been deployed.

The Deployment of Domel’s Task Force

Near the end of the Dessler regime, one of these ships was deployed as part of the Domel Task Force, an extraordinary organization assembled to destroy a Terron battleship (Yamato) that advanced toward the Large Magellanic Galaxy. It was a prototype warship that had spent a long time in drydock. Its red body color and odd appearance earned it the name “Red Fire Dragon” from the soldiers involved in the operation.

In the Battle of the Rainbow Star Cluster, although it carried a special transport aircraft with a rock-drilling bullet cartridge, its function was unpopular among the soldiers who operated it at the front line, and it was only used effectively through Domel’s precise strategic planning.


Return to the previous article