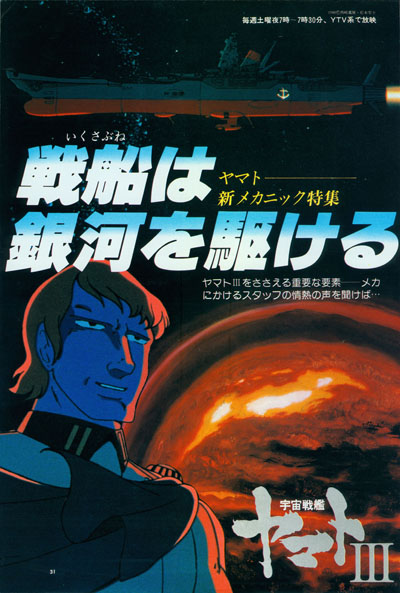 The battleship flies the Milky Way

The new machine carried by Yamato on this voyage to explore certain planets for the purpose of emigration is the Cosmo Hound. We introduce this new machine and the redesigned parts of Yamato.

Mr. Katsumi Itabashi was in charge of the Cosmo Hound design. We asked him about its characteristics.

“At first the Cosmo Hound was to be used for planetary exploration, then Mr. Nishizaki said, ‘do it in the image of the American B29 fighter-bomber.’ Because that was the order, the design incorporated the wide view of the front windows of the B29. Surely, a planetary exploration spacecraft would use a front window like the B29, since I think it’s easier to observe the Earth’s surface during flight.”

“Inside the Cosmo Hound, there is space like a warehouse for the loading of necessary equipment to suit your needs. It could be equipped with a one-person helicopter or rover, and as for personnel it can carry about twenty people. Furthermore, it has weapons that appear by sliding out, so it is possible for it to go into battle. In other words, though it is a planetary exploration spacecraft, it can be used for multiple purposes.”

“As for the full length of the Cosmo Hound, the precise size has not yet been formally decided, but it’s roughly twice the size of a Cosmo Tiger, so I think it’s around 30 meters.” 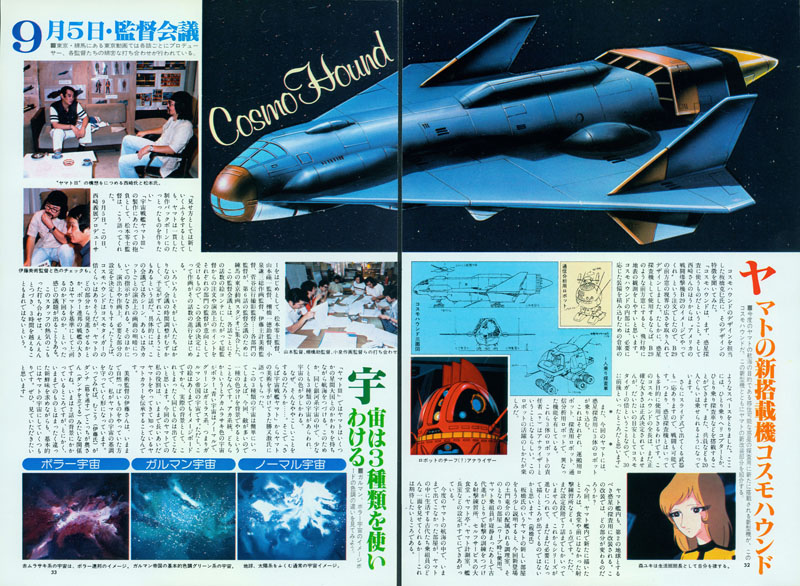 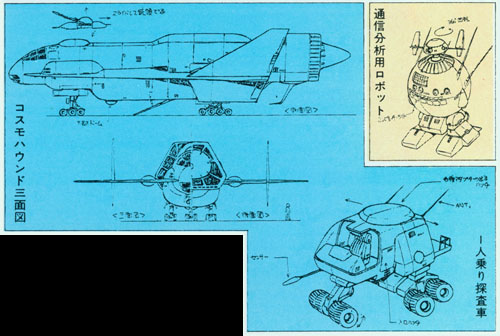 In addition, three types of exploration robots board Yamato this time. Each has different functions, from transport to exploration to analysis in communication. Analyzer seems to be the person (?) in charge of these three types. Let’s look forward to the activity of these robots.

Also, Yamato itself is remodeled for planetary exploration to find the second Earth. What parts are changed in this remodeling?

“There are four or five newly-drawn points for Yamato this time, such as the shooting gallery and the cafeteria, which weren’t seen before. But so far I have only done designs for 7 episodes, so as the series progresses I think the need will come up for more locations.” – Mr. Itabashi.

To explain a little more about the rooms mentioned by Mr. Itabashi, the new character Ryusuke Domon [Jason Jetter] will be assigned to the galley. Designs have already been finished for a room where Kodai continues solo training after the crew retires, a large cafe called “Yamato Pavillion,” a charting room, a captain’s cabin, etc.

In the upcoming voyage of Yamato, you can expect to see rooms that haven’t been seen before to show another side of Kodai and the crew who lives on board. 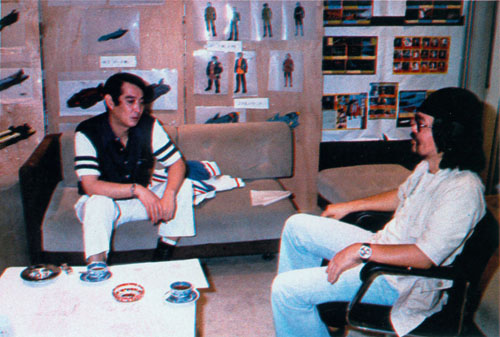 The detailed meeting of producers and directors at Tokyo Animation in Nerima, Tokyo.

Talking about the ambitions for production of Yamato III, director Leiji Matsumoto says, “Even if we show a new device with a twist, we want it to conform to the Yamato production backbone.”

In this meeting, each episode proceeds according to the storyboard drawn for it, and the general director communicates the key points to each department director. The animation for each episode begins after decisions are made in these meetings.

Because everyone in the meeting is very busy, it is difficult to set the time for it, and there is talk that the episode may be delayed by the schedule.

Specifically, in this meeting direction is given for the brightness or darkness of each scene. In addition, they also make decisions about the designs that are necessary for the animation. For example, the Cosmo Hound seems to be about twice the size of the Cosmo Tiger, but it must be decided from what part of Yamato it will launch. Or the size of a Bolar battleship must be determined, based on whether or not it should be larger than Yamato. This is the sort of subject that might be on the agenda.

The passion of the staff stays high as the meeting continues, and it is not uncommon for such meetings to go on for more than three hours.

In Yamato III, Yamato goes on a long voyage and becomes involved with several interstellar nations. For this reason, three different zones of space appear, and the color of each one changes a little.

To learn why such a complicated thing is done, I talked with artist Geki Katsumata, who started with Farewell to Yamato.

“Putting it simply, there are three kinds of space this time to differentiate the background because there are several enemies. When we’re in violet-red space, it’s the color for the Bolar Federation, blue space is normal, and green is for Gamilas, the space of the Galman Empire. But because this is an image board rather than a real background, I think the end product will come out a little different.”

“My role in Yamato this time is to set the parameters for Yamato colors, since I’ve known Yamato for a long time now. Mr. Ito, our art director, has done more natural-type environments up to now, so our arrangement is for me to set the basic tones for space in Yamato. You could say Mr. Ito is the husband who sets the rules and my relationship is like a wife who looks up to the him.”

Anyway, though we’re just now starting the backgrounds for Episode 2, I basically intend to depict space in Yamato with freshness, to make it completely different from a conventional thing. I’d like you to look forward to it by all means.”

Three different colors are used for space; let’s look at the difference in color between Galman and Bolar image boards.

Violet-red space is the image of the Bolar Federation. Green space is the basic tone for the Galman Empire. Earth and the solar system have a normal space image. 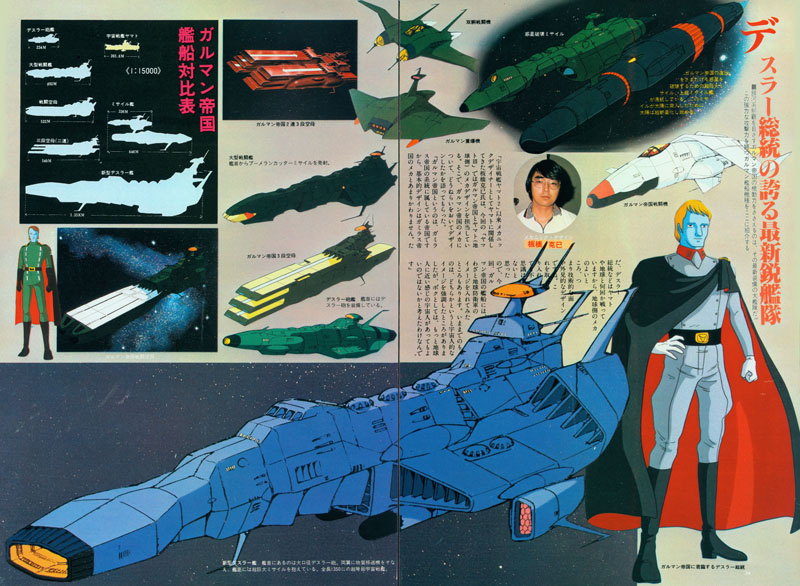 The New and Powerful Fleet that is Emperor Dessler’s Pride

To support the mobility of the Galman Empire which aims for galactic conquest, it is a grand fleet with the latest equipment!! Here we introduce Galman vessels with strong offensive capability. 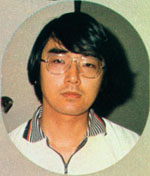 “Because the Galman Empire belongs to the system of the Gamilas Empire, the basic design is not very different from the Gamilas mecha. However, because Emperor Dessler fought against Earth and Yamato several times, the design of its technical face and overall appearance is improved like the good side of the Earth mecha.

After thinking about this, I intentionally incorporated the image of the Earth Defense Forces into the vessels of the Galman Empire. In the past, the intention was to emphasize the alien image, but as for me, I thought it might be good for the aliens to have a feeling closer to Earth people.” 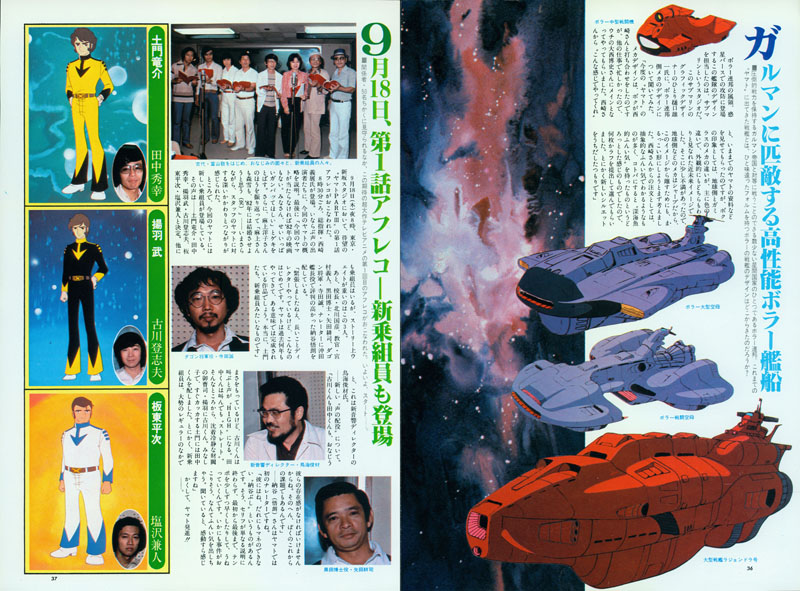 The highly efficient Bolar vessels, comparable to those of Galman

The Bolar Federation is one of the few interstellar empires that can fight on an equal footing with the overwhelming power of Galman. Compared to the battleships that appeared in Yamato so far, where did the different design form of the Bolar come from?

“For this new mecha design for Yamato, because I was busy with other work I made arrangements with Mr. Nishizaki for Mr. Hiroshi Onishi to take the lead. From Mr. Nishizaki came a request of ‘Can you do it like this,’ and we looked at the existing Yamato materials done up until now, but my impression was that the differences between Earth and Gamilas mecha were chiefly in their coloring, with the exteriors of both sides’ mecha also looking relatively near-future.”

“I was a little dissatisfied with the mecha of the Earth side because it is so sharp, so in order to keep away from this image, at first I intended to use round forms. Considering Mr. Nishizaki’s request for it to have an abstract feeling while being recognizable–to put it into words, he was going for more of a ‘deep sea fish’ feel for it–we ended up presenting him with a number of rough designs to choose from. Anyway, they will bring a new kind of silhouette.” 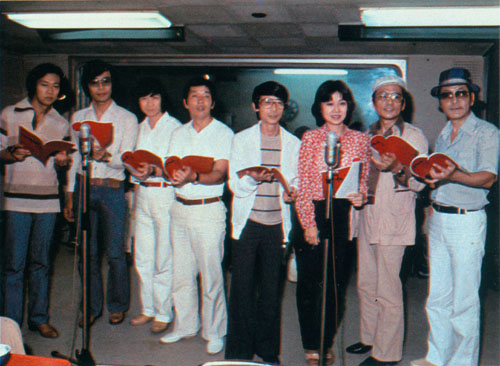 Including Kei Tomiyama as Kodai, there are many
familiar faces and those of the new crew.

On September 18, a new crew appeared for the recording of Episode 1

Watched by nearly 50 onlookers, the first recording was done for what is expected to be a blockbuster TV anime. Finally, the start…

At 8pm on Thursday, September 18, the long-awaited voice recording for the first episode of Yamato III was performed at Shinzaka Studio, Tokyo.

Around 8:30, Executive Producer Yoshinobu Nishizaki appeared. The actors lined up and he explained the outline of this Yamato to them. He closed with a pep talk, saying, “if this Yamato is not a hit, there won’t be a movie in 1982. So I’d like everyone to do your best.”

In addition, he looked at Yoko Asagami [the voice of Yuki] and said, “as for Ms. Asagami, we’ll try to marry Yuki Mori to Mr. Tomiyama [Kodai] in 1982. (Laughs).

It is nothing new to say that there is a deep connection among the Yamato staff.

By the way, a new crew appears on Yamato this time. Hideyuki Tanaka does the voice of Ryusuke Domon [Jason Jetter], Toshio Furukawa is Takeshi Ageha [Flash Contrail], and Kaneto Shiozawa is Heiji Bando [Beaver]. There are other new crew members, but these three weigh heavily in the story.

Kunihiko Kitagawa played the headmaster, Yoshito Miyamura was the instructor, Kouji Yada was Dr. Kuroda, Makoto Terada was General Dagon, and the highly respected Goro Naya, previously in the role of Captain Okita, was the narrator.

“I was nervous. I’ve been a director for a long time, but this was my first time,” said Mr. Takashi Toriumi, the new sound director. “Yamato has been around for many years, and in some ways is now being completed. Domon and the others are truly a new crew.”

Talking about the voices of the “new cast,” he said, “Both Furukawa and Tanaka have the same taste. But when Mr. Furukawa cries out, his voice goes HIGH, and when Tanaka cries out, his voice is STRAIGHT. Furukawa’s character Ageha [Flash], is the son of a noble family, and has a self-posessed calm. Mr. Tanaka’s character Domon [Jason] is angry about having been recently orphaned. Anyway, the members of the new crew need to have presence, since there will be a large number of regulars. That area is going to be a challenge in the future.”

About Goro Naya as the narrator for Yamato, he said, “There is no one who can perform like him. There is something called the ‘Naya method.’ He doesn’t read the lines as if merely explaining. His tempo undulates little by little from beginning to end. The feeling comes out that the event is really happening. I get a deep impression when I hear it.”

Left to right: Makoto Terada is in the role of General Dagon. New sound director
Takashi Toriumi. Kouji Yada has the role of Dr. Hiroshi Kuroda.