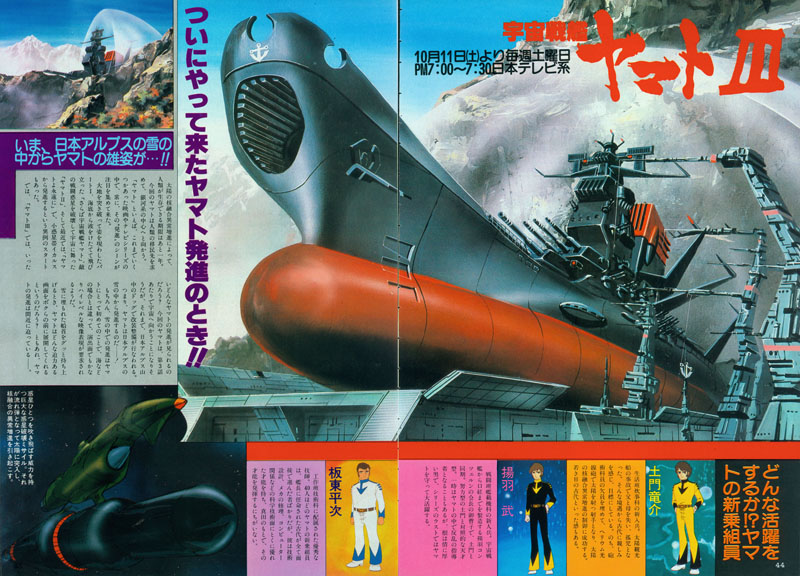 What kind of role do they play!? The New Crew of Yamato

A rookie soldier and cook in the life support group. He became an orphan when he lost his parents in a solar sightseeing boat accident. Under such circumstances, he feels an affinity for Kodai and aims to become like him. Later, he fills a vacancy in the gunnery division and becomes the one to fire the helium light gun that succeeds in controlling the sun’s abnormal nuclear fusion. He has the impression of Kodai in his younger days. [Translator’s note: “helium light gun” was the working name for the Hydro Cosmogen used in the final episode. As you can see, The Anime wasn’t overly concerned about spoilers.]

A rookie in the air corps of the combat group. He is the son of an elite industrial chairman concerned with the production of everything from lipstick to space battleships. He and Domon are in sync. He is a genius-type in contrast to Domon, who is a hard-working type. At one point, he may lead a rebellion on Yamato. At his core, he is a solid man who protects Yamato and will play a big part in the conclusion of the series. [Translator’s note: the reference to a rebellion was related to a plot for Ageha’s father to take over the ship. This was one of many stories lost when the series was cut in half.]

An excellent engineer who is assigned to the engineering group. There are approximately 40 new crew members on Yamato, all chosen by interviews with Koai, who is appointed the captain. Bando has strong technical skill in the repair of mecha, especially in computer-related scientific aspects. His talent will surely be demonstrated working under Sanada. 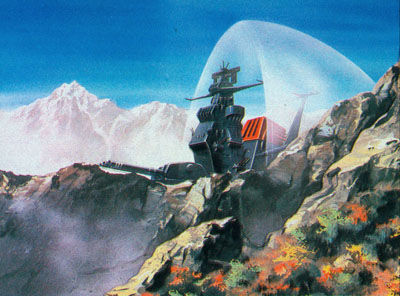 The time has finally come for Yamato‘s launch!!

Now, in the snow of the Japan Alps, the majestic figure of Yamato…!!

In the many movies and TV series of Yamato so far, the “launch” scene has always attracted attention. In Part 1, it was revealed by breaking through the Earth. In Farewell, it rose from the bottom of the sea and kicked up waves, then did so again in Yamato 2 to fly into space and destroy the planet of the enemy. More recently, there was the unusual launch in Be Forever Yamato that started from Icarus in the astroid belt.

Of course, starting from the snow is a first for Yamato, unlike in the sea, so a fairly high level of image expression is required from the production. What kind of powerful image will unfold before us when the mighty bow rises up from under the snow? Anyway, the launch of Yamato is getting closer. 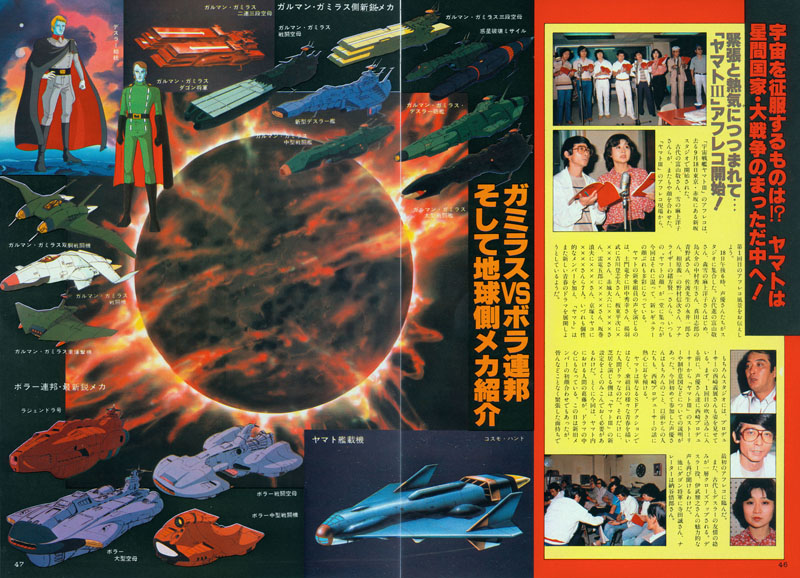 Who Conquers Space!? Yamato is in the midst of a great war of interstellar nations! 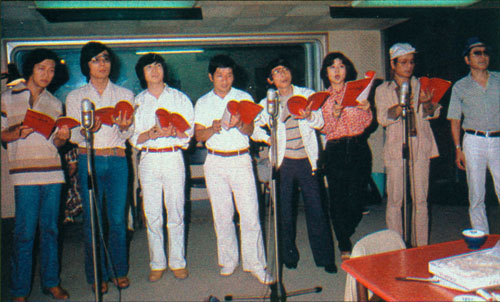 Kei Tomiyama as Kodai and Yoko Asagami as Yuki were reunited again, and we convey the scene from the first voice recording of Yamato III.

On the afternoon of the 18th, the voice actors met at the studio at 6:00pm. Present were: Kei Tomiyama as Susumu Kodai [Wildstar], Yoko Asagami as Yuki Mori [Nova], Hideo Nakamura as Shima Daisuke [Venture], Takeshi Aono as Shiro Sanada [Sandor], Ichiro Nagai as Dr. Sado [Dr. Sane], Shinji Nomura as Yoshikazu Aihara [Homer], Kenichi Ogata as Analyzer [IQ-9], and others. Although the usual “faces of Yamato” were gathered, there was also a diverse lineup of new regulars.

Playing the voices of the new crew were seven actors: Hideyuki Tanaka as Ryusuke Domon [Jason], Toshio Yoshikawa as Takeshi Ageha [Flash], XXXX as Heiji Bando, XXXX as Dairoku Akagi, XXXX as Goro Raiden, XXXX as Namio Sakimaki, and XXXX as Miyako Kyozuka. [Translator’s note: at the time of publication, the actor’s names were unknown.] By adding all these individual members, Yamato seems to be developing a new drama of youth again.

Of course, Producer Yoshinobu Nishizaki turned up in the studio, too. Before the first recording session began, he gave a description of Yamato III‘s story and the intent of production to the voice actors. The veteran actors and the newcomers alike listened intently to the story of Producer Nishizaki.

Yamato is not merely SF action, it is a drama of human beings described through the the various young crew members. Therefore, it is necessary for the performers of Yamato III to fully understand the setup. This time, the human conflict in Yamato is particularly at the center of the drama. Although it was the first meeting of the new and old actors on that day, everyone who attended that voice recording had a tense look on their faces.

In addition, the tangle of friendship between Kodai and Dessler will be examined more closely. We’ll hear the attractive voice of Masato Ibu in the role of Dessler again. Finally, Mr. Goro Naya is the narrator, and Mr. Makoto Terada performs the voice of General Dagon.

[Translator’s note: this was truly a meeting of captains. Goro Naya was the voice of Captain Okita [Avatar] and Makoto Terada would later perform the voice of Captain Picard for the Japanese dub of Star Trek: The Next Generation. More recently, he provided the voice for Chief Engineer Tokugawa for Yamato 2199.]