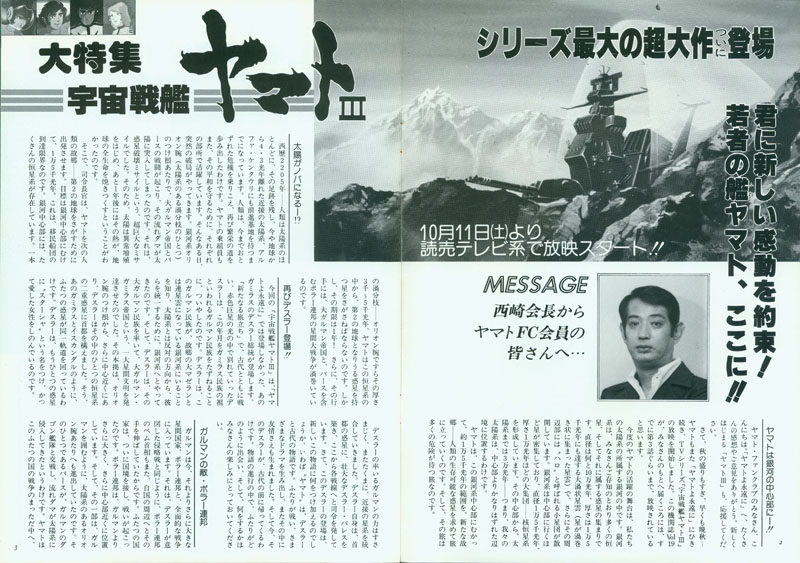 The creator of [Space] Battleship Yamato is here!! Yamato goes the center of the galaxy!!

From Chairman Nishizaki to the Yamato Fan Club members: I promise you new excitement!

Hello to everyone in the Yamato Fan Club. Thank you for your many impressions and comments on Be Forever Yamato. Please give your support as Yamato III now begins.

Now, as the prime of autumn passes into late autumn, Yamato also continues from Be Forever to the broadcast premiere of Yamato III. When this issue of the magazine reaches you, I think it will have already reached Episode 3.

Yamato goes toward this galactic center looking for a new home, within a range of about 15,000 light years. It goes on a quest for a viable planet for the human race. And many dangers await on that journey. 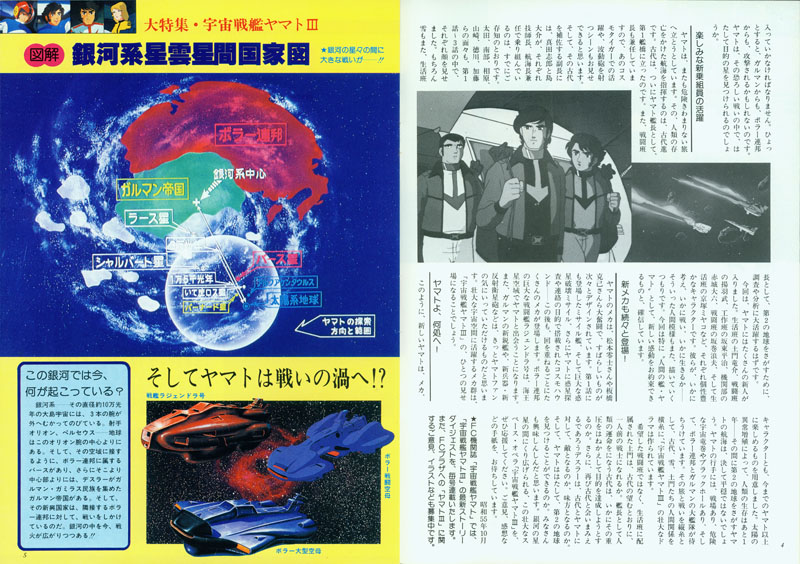 It is the year 2205–human beings have left their footprints on most of the solar system. By this time, there is also an advance base on Alpha Centauri, the closest solar system to Earth at 4.3 light years away. Humans have overcome the crises visited upon them before now and have begun again to follow the path of prosperity. To help keep the peace, the crew of Yamato plays active roles everywhere.

One day, a catastrophe suddenly arises. At the base of the Orion arm of the galaxy (the spiral arm that contains our solar system), a battle breaks out between the Galman Empire and Planet Berth. From there, shrapnel rushes into our sun–a giant missile called a Planetary Destruction Missile. It causes an abnormal increase in solar fusion, and it is discovered that all life on Earth will be burned up in one year.

Therefore, Yamato‘s commander in chief gives orders to launch and start looking for a second Earth. The goal is 15,000 light years toward the center of the galaxy, the range limit of the emigration fleet. There are many star systems in the center of the Milky Way, which is 15,000 light years thick. Even one branching spiral–the Orion arm–is 3,000 light years thick. Within this arm, Yamato must search for a star with a planet that can be a second Earth. However, the deadline is one year! Furthermore, there is the possibility of a great war between the Galman Empire and the Bolar Federation that swirls in the way.

Emperor Dessler was not in Be Forever Yamato, but he appears again in Yamato III. After their battle in The New Voyage, when Dessler parted with Kodai in the light of a red giant star, he sought the Galman people, who are called the father of the Gamilas race.

Dessler knew that the Milky Way galaxy was the home of the Galman race, from which his people came to build their home in the Large Magellanic Cloud. In order to unify them, he traveled to the galaxy from the opposite direction. Dessler now commands the large Galman nation to develop a major insterstellar civilization called Galman/Gamilas.

Their base is in the galactic center, close to the base of the Orion arm, where Dessler set up his capital on one of two binary planets. Like Gamilas and Iscandar, they are two planets in the same orbit. In memory of the woman he once loved, Dessler named the other planet “Starsha.”

Lead by Dessler, Galman wields terrible power, and integrated neighboring star systems in an instant. Dessler himself has built the magnificent Dessler Palace, from which he issues commands to the front.

What does the appearance of Dessler add to this new story? Yamato is, so to speak, the story of Kodai and Dessler. Their battles produced a variety of drama, and a friendship was even born. This Dessler will appear before Kodai again now. As for how they meet during the progress of the story, that should be a pleasure for everybody. 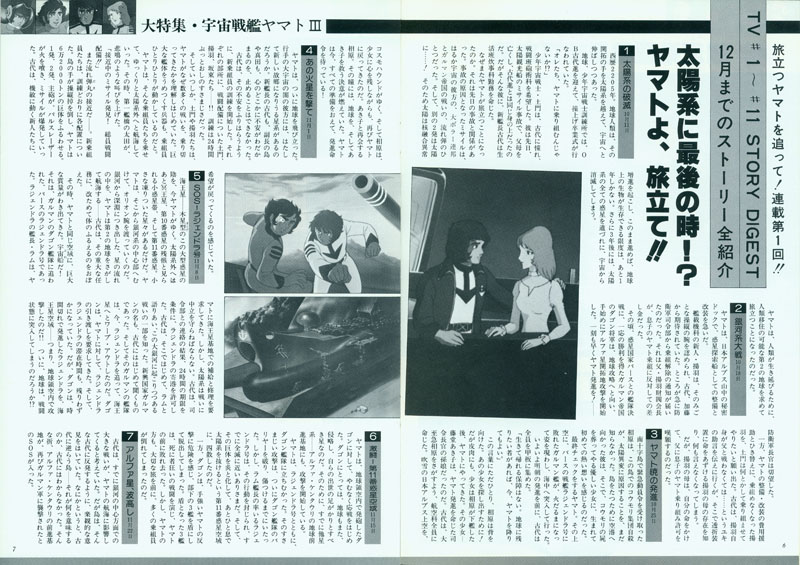 Bolar Federation, the enemy of Galman

Galman now enters a great war with another huge interstellar nation, the Bolar Federation. This is because Bem, the Bolar prime minister, extends his hand beyond the edges of his territory with the same aggression as Dessler. A battle finally breaks out where their two borders meet. The Bolar Federation is even larger than Galman, and also located near the galactic center. In order to surround Galman, it advances into the Orion arm that contains our solar system.

As Planet Berth engages the Dagon fleet of Galman, shrapnel invades our solar system. Yamato must travel into the midst of war between these two nations. It could be attacked either by Galman or the Bolar Federation. In this terrible fight, can Yamato really find the target planet?

Activities of the attractive new crew

Yamato is rising up once again for an extremely dangerous voyage. Susumu Kodai [Wildstar] leads this voyage upon which the human race’s fate depends. At last, he stands on the bridge as Yamato‘s captain. In addition, because he also holds the post of combat group leader, I think we can show him in action in a Cosmo Tiger and firing the Wave-Motion Gun.

As for Navigation Leader Shima Daisuke [Venture] and Chief Engineer Shiro Sanada [Sandor] who board the ship as first mates, you are already familiar with them. As for Ota [Eager], Nanbu [Dash], Aihara [Homer], Yamazaki, Tokugawa [Orion Jr.], Kato [Conroy], and others, they each turn up in episodes 1-3. Of course, since Yuki Mori [Nova] looks for the second Earth as leader of the life group, she should be very active in research and analysis.

Many newcomers board Yamato this time. Ryusuke Domon [Jason] of the life group, Takeshi Ageha [Flash] of the combat group, Heiji Bando [Beaver] of the technical group, Miyako Kyozuka [Penny] of the medical group, Dairoku Akagi [Ace] of the engine group, and Namio Sakimaki of the gunner group–each character has a rich personality.

How they think, how they live, how they fight–we plan to depict various human behaviors. This time, I am confident that we can promise a new impression of the “People of Yamato.” 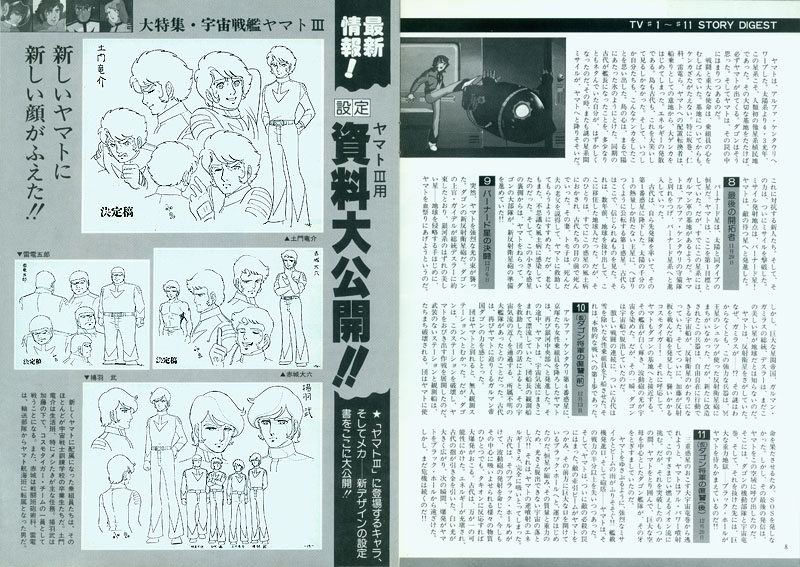 New mecha appears one after the other!

With the hard work of Mr. Leiji Matsumoto and Mr. Katsumi Itabashi, wonderful designs appear one after another. Missile ships and huge Planet-Destroyer Missiles appear in the first episode, and the Cosmo Hound that is carried on Yamato for planetary exploration and enhanced communication–after these, a lot of mecha will continue to appear.

Yamato will meet the huge Battleship Legendra of the Bolar Federation in the orbit of Neptune. In addition, I’m sure Yamato fans will like the new battleships of Galman and new weapons such as the new Reflection Satellite Gun. The mecha that plays an active role in magnificent outer space will be a highlight of Yamato III. 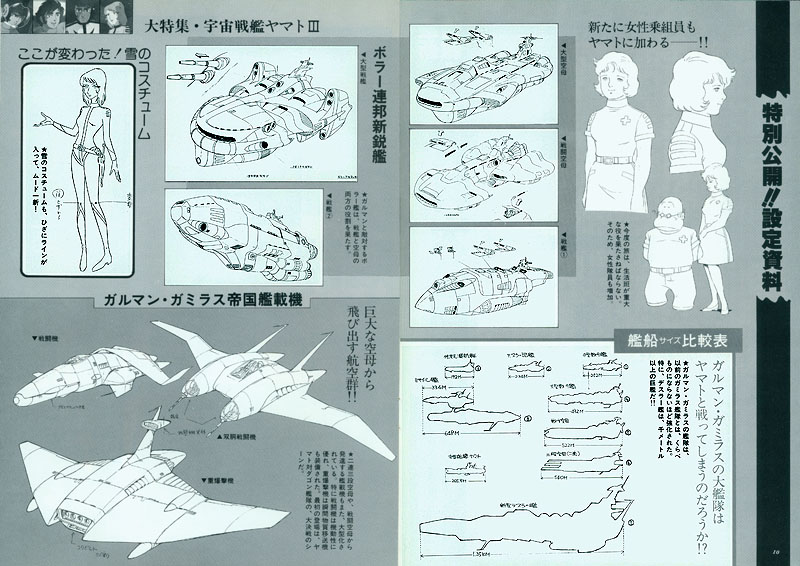 In this way, we have prepared a more enjoyable Yamato than ever with new mecha and characters. With the abnormal activity of the sun and the one-year deadline for human survival, Yamato‘s search for a second Earth will not be peaceful at all. Along Yamato‘s course lies the possibility of battlefields, space tornadoes, a dangerous black hole, and the large fleets of Galman and Bolar lying in wait. With warp travel, battles, and the weaving of human relations for Kodai, Yuki, Domon and others, the drama of Yamato III will be spectacular.

Domon wanted to be assigned to the combat team, but is instead assigned to the life group. Can he overcome this to become a full-fledged soldier as Kodai hopes? Kodai carries the fate of mankind as the captain. How will he cope with the pressure to achieve his purpose? Furthermore, Dessler and Kodai will meet again. Will he support Kodai and Yamato, or become an enemy? And can Yamato really find the second Earth? I think everyone will be interested.

Please support Yamato III, the magnificent space opera that unfolds among the stars of the galaxy. We look forward to your letters of opinion and comment.

A story digest will appear in each upcoming issue of the Yamato Fan Club magazine. In addition, we welcome your feedback on Yamato III and illustrations for the FC Plaza section. 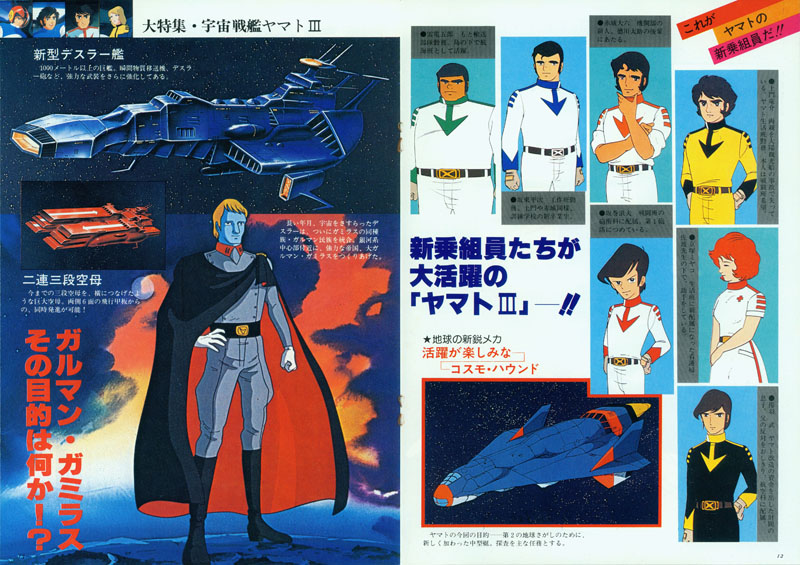