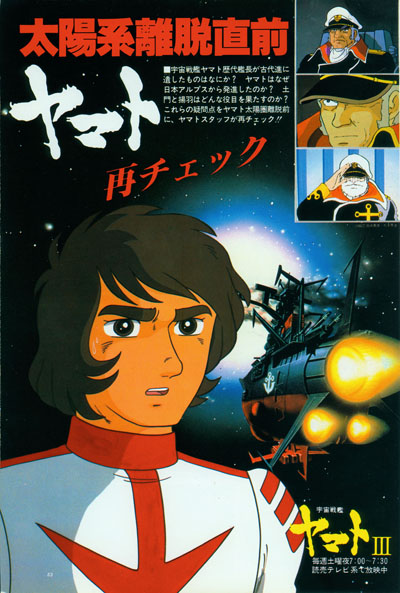 Before the sun goes into paroxysm

What did each generation of Space Battleship Yamato‘s captains leave for Kodai? Why does Yamato launch from the Japan Alps? What roles do Domon and Ageha play? Before Yamato leaves the heliosphere, we recheck these points with the staff!!

What did Kodai receive from his predecessors in the line of captains? 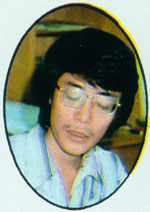 Under the previous captains of Space Battleship Yamato, Kodai served as deputy caption, and was appointed as leader. To learn how Kodai was influenced by the personality of each leader, we asked one of the most senior Yamato staff members, Kazunori Tanahashi.

It was Captain Okita who influenced Kodai the most. In Episode 3 of the first series, Chief Engineer Tokugawa [Orion] taught Kodai about his personal character: “Even if the odds are 10,000 to 1, he believes there can be success and he does things calmly.” And there was Okita’s thinking about “enduring the humiliation of today for the sake of tomorrow.”

I think those two points became central concepts for Kodai in many battles. In Be Forever Yamato, Kodai says to Yamanami, “Even if there is only a 1 in 10,000 chance, don’t human beings make all efforts to survive?”

If we were talking about the Imperial Japanese Navy, Okita’s position is like [Admiral] Isoroku Yamamoto under Hideki Tojo. Under Commander Todo, Okita was given total command of the Japanese fleet–though we call it the Earth fleet.

In addition, Hijikata was a contemporary to Okita and taught Kodai at the space soldier academy. In the theater of attack by Gatlantis, his patrol ship was rescued by Yamato and he was appointed the second-generation captain [in Farewell to Yamato]. However, in the TV series, he appeared as the captain of the newly-built flagship Andromeda and so he did not become the captain of Yamato.

As for Yamanami, he was introduced by Sanada on Icarus: “We made him head of the training school, wholeheartedly educating a new generation of human beings.”

Together as career space soldiers, Okita, Hijikata and Yamanami symbolized, belief, leadership, and decisiveness. Let’s hope Kodai lives up to the expectations of his predecessors. 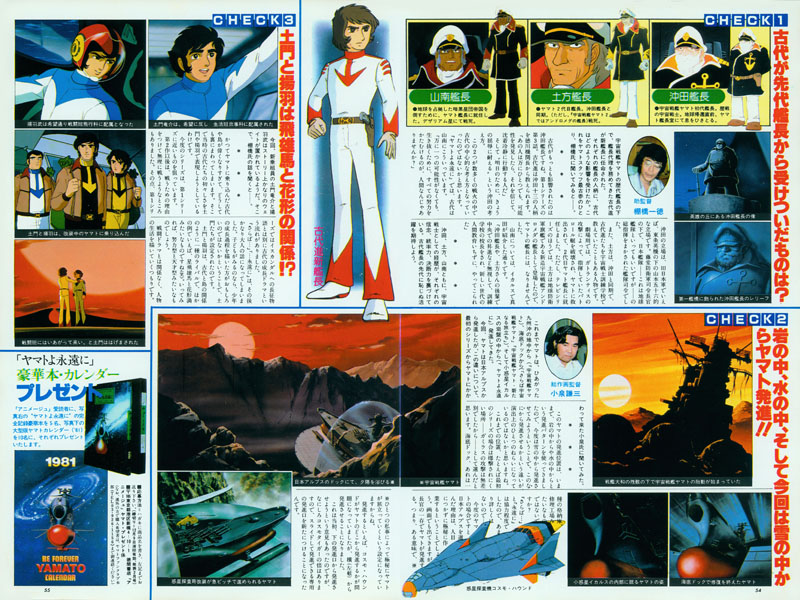 From rock, from water, and this time from snow, Yamato launch!! 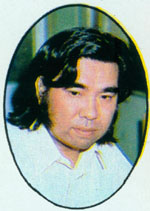 Previously, Yamato launched from the dry ground off the coast of Kyushu (in Space Battleship Yamato), from the sea (Farewell and New Voyage), and the bedrock of Asteroid Icarus (Be Forever). This time, Yamato launches from the Japan Alps. We asked Mr. Koizumi, who has been involved since the first series, about the difference.

The starting position of Yamato so far has been a pattern of emerging from rock or water, and this time we take off from snow. I think there were different launching points because of the aims of the production.

For example, in the case of the first series, I think we chose a place that was difficult to be bombed because of indiscriminate attacks from the Gamilas. And isn’t an undersea dock something like a repair hangar? Farewell and Be Forever were more collaborative efforts, so I don’t know a lot about those choices, but the reason we chose the Japan Alps this time is because top secret work is going on outside the public eye.

It also comes out on screen that Yamato is to launch at the discretion of the EDF Commander. In other words, the setup is that Yamato launches in secret as a private affair.

Speaking of launches, the location from which the Cosmo Hound launches from Yamato has been a problem, but we’ve decided it will take off from the port side. At first the opinion was to let it launch from the lower hatch, but because it’s about twice the size of a Cosmo Tiger, we gave it its own exclusive hatch for it to slide out and take off.

Do Domon and Ageha have a relationship like Hoshi Hyuuma and Mitsuru Hanagata?

This time, considerable weight seems to have been placed on new crew members Domon and Ageha in the story. Therefore, we hear about it from Mr. Tanahashi.

When Kodai and Shima boarded Yamato, their rivalry became too prominent and inevitably got pushed to the background. Therefore, we want to recapture the charm and naivete of Kodai and others with Domon and Ageha. This new series aims to be closer to the first series.

Since the second work, there were parts where we seemed to be adding reasons for them to fight, to force them to fight. In that respect, aside from the long voyage to Iscandar (in the first series) the drama is about the growth of Kodai. After that, Farewell and Be Forever became more adult stories. If a child watches, the growth process would be more interesting to a young boy, so we set up Domon and the others.

Domon and Ageha have a rival relationship like Kodai and Shima did, sort of like Hoshi Hyuuma and Mitsuru Hanagata [Translator’s note: characters from the mega-popular baseball anime Star of the Giants]. (Laugh) You might say there’s a genius type and a hard-working type. Regardless of the battle drama, we plan to depict the lives of people.