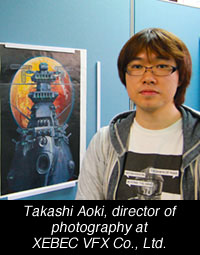 Since its TV broadcast in 1974, Space Battleship Yamato has been adapted into a feature film and a live-action movie and still takes pride in its great popularity. It is the basis for a 26-episode series produced by a new staff titled Space Battleship Yamato 2199. It premiered in the form of theatrical exhibitions from 2012, and began broadcasting in April 2013 as the first new Yamato TV series in 33. The theatrical release of Chapter 6 occurred on June 15.

In this new work, attractive visuals are made in close combination with detailed scientific research. 3DCG takes a leading role for specific background elements such as monitor graphics and props, the depiction of strategy, or the workings of the Wave-Motion Engine, but it is processed so that characters can still be hand-drawn without incongruity.

We spoke with Takashi Aoko of XEBEC Co., Ltd. about the production of these backgrounds and monitor graphics. 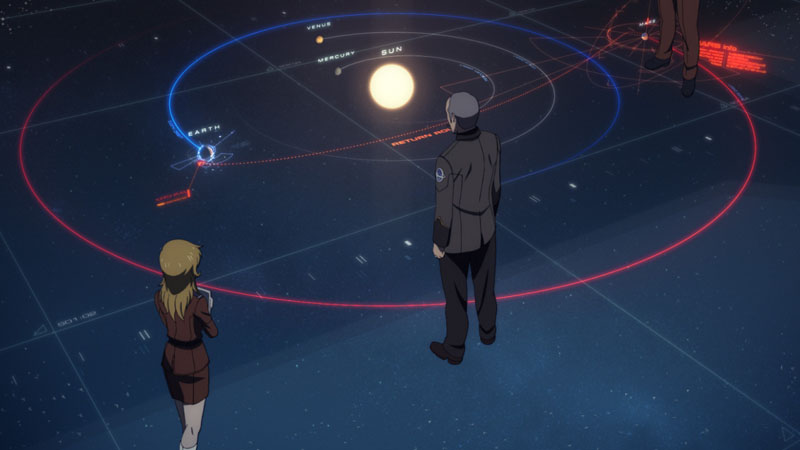 Interviewer: In what form is Cinema 4D used in in Yamato 2199?

Aoki: The CG of the space ships is done at a different company, but most of the 3D displays of the monitor graphics in the story are made with Cinema 4D. I also use it on moving structures inside the ship and in the background, such as maps and cameras.

Interviewer: A lot of monitor graphics in anime are being done in 3D lately.

Aoki: Stereoscopic displays have definitely increased in SF. What I do most are SF information displays on floor monitors. In Episode 1, there’s an overhead shot where the crew looks at a display of the solar system (above). For this, Mr. Toshihiro Handa (a professor at Kagoshima University department of science) and Mr. Toshiyuki Takahei (of Orihalcon Technologies), who participate in scientific research for the series, obtained a diagram of planet positions in 2199. Based on that, I traced and built it in Cinema 4D to get the proper distances.

Interviewer: Did you do a simulation of the actual planets?

Aoki: The route of Yamato was based on actual observation data from the Shinra Dome planetarium of the science museum. We also had to show what the scenery looks like through a 35mm lens when we leave the solar system, and from outside the galaxy. Although it’s based on observations from Earth, we had to simulate how the galaxy would appear on screen, and what size it would be when photographed by a standard lens. Based on this data, we created scenes showing the entire galaxy when Yamato had just barely left the Milky Way, as well as the scenes where it fades from view as they’re many light years away. 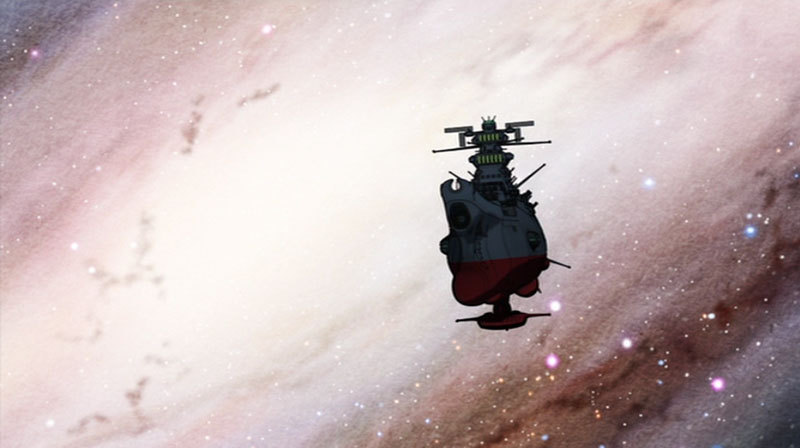 Interviewer: How are Monitor graphics made?

Aoki: For the scene of the floor display, the monitor graphics were rendered with Sketch and Toon, and material such as planets were rendered separately in Cinema 4D. A feeling of luminescence was added in After Effects, and it was made translucent. The base assets form about 30 layers, which are then processed in After Effects. From each section, we take the assets and use a lot of camera projection techniques to give them a feeling of dimensionality, but it’s a big help that it’s not that hard to link camera data from Cinema 4D to After Effects.

Interviewer: Monitor graphics have attracted a lot of attention recently.

Aoki: Every anime company is starting to have someone in charge of monitor graphics. The industry is small, so everyone knows each other and I think we all have a sense of rivalry. Monitor graphics is a place where CG can play an active part, and I think it gives the impression of a star performance in SF films from Hollywood. In anime, the judgment that “the monitor graphics in this anime are cool” ranks alongside “the characters are cute” or “the mecha are cool.” I think it’s good that interests are going this way. 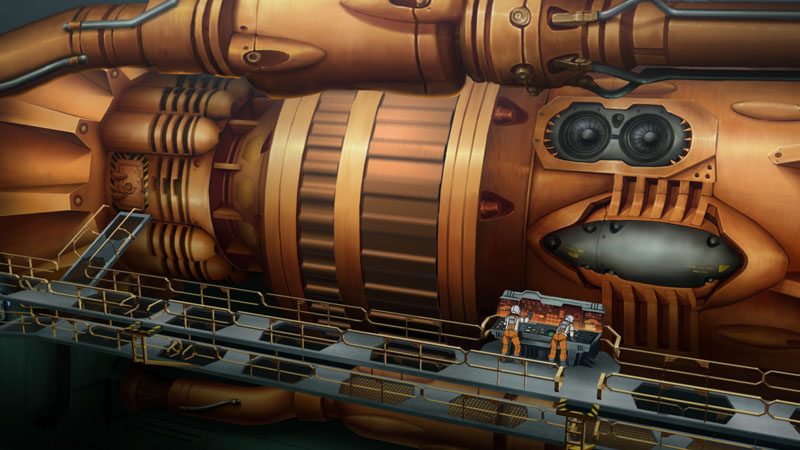 Interviewer: It seems Cinema 4D is used in backgrounds.

Aoki: Yamato‘s engine room was modeled in Cinema 4D, and it’s used as the basis for the layout in each scene. The customary flywheel of the Wave-Motion Engine (above) was rendered in Cinema 4D. You might expect the entire engine to be made that way, but the portion around the wheel that does not move was done in Photoshop by the background art company using the CG background as a guide, and it was finished with an acrylic paint style.

In the field of anime, layouts done with 3D software are increasing a lot. Natural objects are still drawn by hand, but there is merit in building mecha-like rooms and structures in 3D beforehand, and adjusting them for angle changes. Because Yamato in particular has many stories in the battleship, we made a model of each room and get a lot of layouts of from that. It is useful because accurate passes can be done even without 3D camera work.

In the control room of the main guns (below), the structure that carries out the blowback was originally in 3D. Because it became a slightly complicated rig structure, we modeled the room and had a picture drawn based on that form, then moved a projection map of it. It looks like a drawing, but in fact the mapping was done in Cinema 4D. 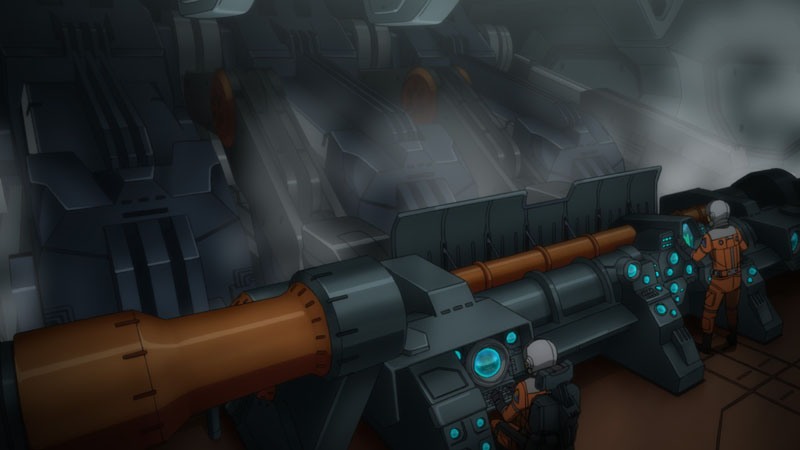 This is a slightly different example, but for the closeup of the UN Space Navy clock (below), only the clock face was done in Cinema 4D. The outside of the clock is a drawing, but we modeled it anyway so it would look good. Upon making the whole thing, we have the key animator do a rough sketch, and then have them substitute the drawing. Besides, various planets appear, so we apply textures to the spheres and use Cinema 4D to render the atmospheres and flares.

Interviewer: There seems to be a variety of methods, so how do you divide up the work?

Aoki: It might be unique in the case of Yamato, but for the people concerned at the beginning of a scene, the followup can change a lot. The feeling is that the flow is constructed according to the people who gather there. The staff and designers, such as the CG operators, use various kinds of software, and since each has its strong and weak points, the feeling is that we gather and build up the ideas together.

In this flow, when a storyboard comes in, the first thing we do is the “CG breakdown,” a meeting where we sort out which elements of which scene will be done in CG. “This mechanism here is 3D,” or “this is a closeup, so let’s draw it,” or “let’s hit this part with 3D photography and ask the background company for the rest,” that sort of thing.

Then we take it back to each section and start working, and the feeling is that it gets integrated before progressing to the next step. Therefore, the way to make each scene is different, and the data that comes up is also different. The photography deparyment is where all the material comes together, not just the 3D but also the drawings, so we have to combine all the materials into the final image. Besides After Effects, we use Cinema 4D as a catchall to put all the assets in and fortify (or harden) them. 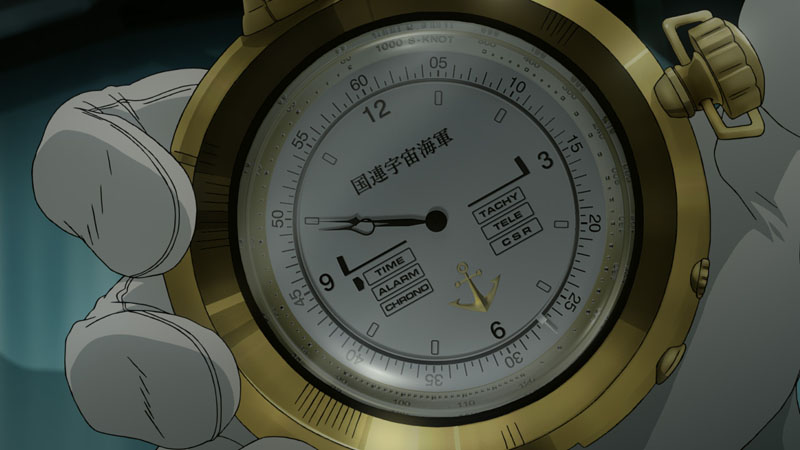 Interviewer: Is there a lot of cooperation with After Effects?

Aoki: Since After Effects is good at controlling the nuances of the final picture, we write the camera data from Cinema 4D, we add the elaborate details and fine filter work by linking it to the 3D camera, and add particles in After Effects.

Interviewer: What kind of interaction do you have with with other staff members?

Aoki: There was a time when a designer came to me and said, “The original rough design was done in Hex King. Aoki, can you do something about it?” I had them export it as an .OBJ, listened to their requests regarding contrast or the skeleton, then fixed it up in the Cinema 4D modeler. Finally, I attached motion to it, assembled a rig, and even did the layout cut mapping in this scene, and I think it turned out very much as the key animator had drawn it.

Because our office doesn’t have a background department, we progress through each work in cooperation with an art company. Since each of the art companies also has a 3D department, there are situations where we co-own something used in the production where the art director did the base modeling, and others where something we modeled here is delivered to use in the layout. So there is some collaboration there.

Interviewer: Other companies’ 3DCG software is often used in anime production. Is there any problem with cooperation?

Aoki: Some things such as shaders (proprietary surfaces and textures) are not shared, but since the passing of models and camera data is possible, there is cooperation in that sense. And there, conversely, since the tools are different, I want to output a picture from a different pathway. 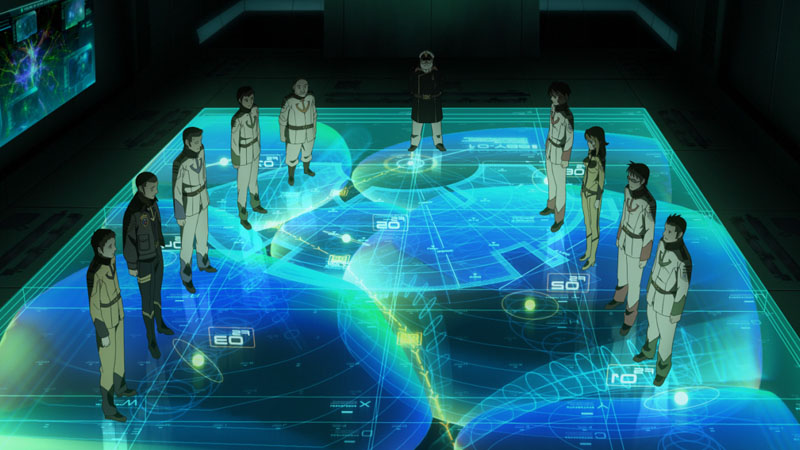 Development of the Workflow and staff

Interviewer: How long is the production period of the photography department?

Aoki: For one episode of Yamato (approximately 22 minutes) it is one month after we receive the storyboard. Each episode overlaps and progresses in parallel, so we composite roughly 400 scenes in about ten days. The average is to finish about 40 scenes a day. That’s the form of the direction process. Naturally, these are all first takes without approval from the supervisor, so the number of retakes increases from there with corrections.

Interviewer: I would think the education of the staff is difficult.

Aoki: I don’t do any particular training. Things we made in the past are shown to a newcomer in a way that shows the route to some extent; “you use this function and that function to achieve these results,” and the feeling is that they learn by doing.

For the scene of the jellyfish in CG, I got staff members who had just begun using Cinema 4D to make it in about two days. Judging from the experience of using other 3DCG software, the impression is that it takes a lot of time for a newcomer to use it well, but when I gave Cinema 4D to a staff with 3-4 years of photography experience, the impression was that they could master it surprisingly fast. It seems to me they were able to reach a place where they felt good with it in the early stages. That’s what’s good about Cinema 4D.

[Translator’s note: the last exchange in the interview is about Mr. Aoki’s evaluation of certain features in Cinema 4D, so we’ll cut to the finish here.]

Interviewer: Thank you. The series is nearing its climax now, so keep up the good work.

Click here to see a gallery of all the images in the original article.