Although the excitement had begun to build well ahead of the Space Battleship Yamato movie’s premiere on August 6, 1977, licensors maintained a wait-and-see-attitude. But when the boom sounded, they were quick to react. It took Bandai three months to release their first movie-related kit, but it was just as revolutionary as Yamato‘s comeback. 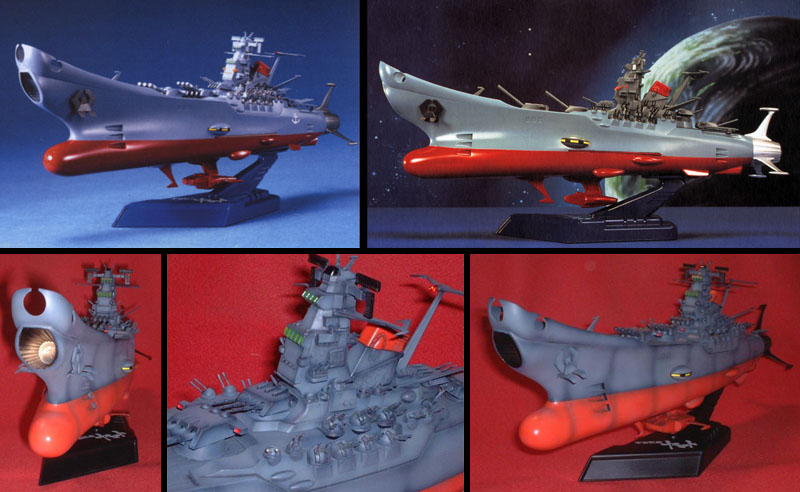 This unique kit was sculpted in forced-perspective to mimic the iconic “Yamato-in-flight” image that had achieved symbolic status with fans. The bloated bow and shrunken stern looked very weird from the side, but made for a convincing simulation when seen as intended. This kit was the only one to successfully capture those dramatic proportions, and was later used in a novelty 3-D lenticular poster.

This redesigned reissue of the 1974 Cosmo Zero eliminated the windup motor and replaced it with better detailing and a pivoted slide-on stand.

Following the new standard set by the Cosmo Zero, this reissue of the Black Tiger was also upgraded and given a stand of its own.

This version of the ship was resculpted from the 1974 model to more closely resemble Leiji Matsumoto’s original design. The windup motor was replaced by a pivoted slide-on stand. The plastic had a golden-bronze finish and the kit included a tiny Analyzer and two fighters, which had also been included in the first Yamato model.