For reasons best known to Akira Hio himself, his manga adaptation of Farewell to Yamato is the diametric opposite of his earlier Space Battleship Yamato effort, cleaving so close to the content of the film that the only thing dividing the two (in terms of the story being presented) is their format.

That story began as a three-hour screenplay completed in January 1978, which was revised down to two-and-a-half hours before animation production began. It was perhaps a missed opportunity that Hio also worked from that script, or his Farewell manga could have been what the earlier Yamato manga turned into: a time capsule of earlier ideas. 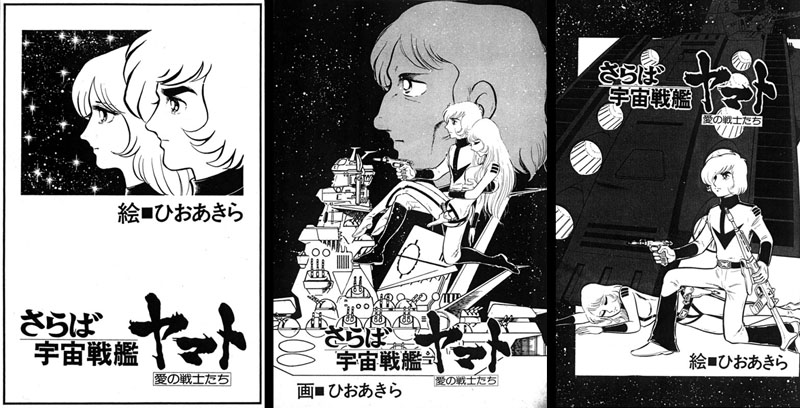 Another way in which the two adaptations differed was the timing of their publication, which was not altogether by choice. Here are Hio’s own comments about his experience with Farewell:

“I was delayed by nearly six months because the amount and substance of the mecha was just overwhelming. My editor constantly yelled at me while I was drawing, saying, ‘because of you, my hemorrhoid problems have only gotten worse, since I’ve had to sit on my butt, keeping you company, just to make sure you get the job done! I’m not running a doujinshi here! I even missed a promotion because of you!’ I cannot face him to this day without offering my sincerest apologies, and bowing low to him for putting up with the likes of me.”

Hio used up all his lead time and more, delivering volume 1 later than Asahi Sonorama would have liked and preventing it from appearing in stores until a month after the movie opened. Slightly over two months separated the subsequent volumes, so that volume 3 (which brought the total page count to 596) did not appear until a full year after Hio had obtained the screenplay. Leiji Matsumoto commenced work on his version later than Hio and continued for several months after Hio crossed the finish line, but as has been recounted elsewhere, his version was far less complete. 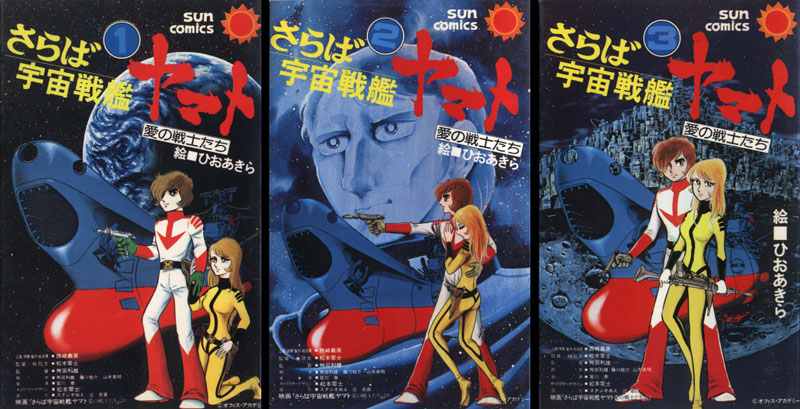 Hio’s Farewell manga followed exactly the same reprint pattern as his Space Battleship Yamato adaptation, reappearing in 1979, 1993, and 1999 in variant editions from Sonorama, then as part of Media Factory’s digest-sized Yamato Library in 2005.

Since the manga hews so closely to the content of the movie, a recounting of the story is unnecessary. Instead, it’s worth pointing out what was unique or experimental in the artwork that helps the manga to stand on its own merits. Clicking on the thumbnails shown below will open a larger image of the page being described. (Remember that manga pages are read from right to left.) All artwork is © Akira Hio.

In the four years since his first outing with Yamato, it’s clear that Hio was able to shed some of his earlier influences and gain enough confidence to find a style of his own. A comparison of the character art in the Hero’s Hill scene with his earlier manga shows refinement and more comfort with the style of the anime.

In the Farewell manga Hio began a practice which would become something of a crutch in later manga, the repeated use of photocopied spaceship images. Rather than draw Yamato from multiple angles as the story dictated, he instead reused a limited number of stock drawings, direct copies of animator’s model sheets. In the sea launch scene, however, he lavished his time on a fine rendering of Yamato for its triumphant return to action.

This unique interpretation of Yamato plunging into a space warp is worthy of Andy Warhol with its stark contrast and repetition, sharply distinguishing it from the early “acid trip” warp scenes created by Leiji Matsumoto.

Dessler’s return from the dead marks a strong evolution from Hio’s earlier renderings of Dessler, which resembled the anime character design only from the neck down.

A new tool Hio brought to the table for his Farewell manga was an airbrush, which he used to great effect in this battle scene between Dessler and Yamato.

Here we see an example of Hio’s heavy reliance on animation model sheets for his space battle scenes. Though his desire to pack a page with as many ships as possible is to be commended, his reliance on photocopies is obvious and distracting.

Thankfully, Hio balances the ledger for his photocopy habit with these beautifully rendered scenes (generously spread over 8 pages) of the disastrous effects inflicted on the solar system by the arrival of Zordar’s White Comet. Such scenes bring out Hio’s true strengths, which are his sense of mass and scale.

Topping the charts is this stunning six-page flyby of the Comet Empire City, which does an excellent job of communicating what a massive object it truly is. This is a great example of a storyteller using his medium for all it’s worth. A single mega-panel spread across this many pages is much more rare than it should be, but the economics of comics publishing often discourage such innovation.

Outdistancing the great Leiji Matsumoto on Farewell to Yamato put Akira Hio in rare company, but he wouldn’t stop there. Even as Matsumoto labored on with his own Farewell manga, Hio was already hard at work on Yamato‘s next adventure.

Continue to The New Voyage

One thought on “Manga by Akira Hio”