Starting from the original 43 years ago, this will be the 15th theatrical “launch” of the Yamato series, so we are “launching” 15 tidbits here. Please enjoy it. “This is Earth command ship 225. Idiots. Over.” 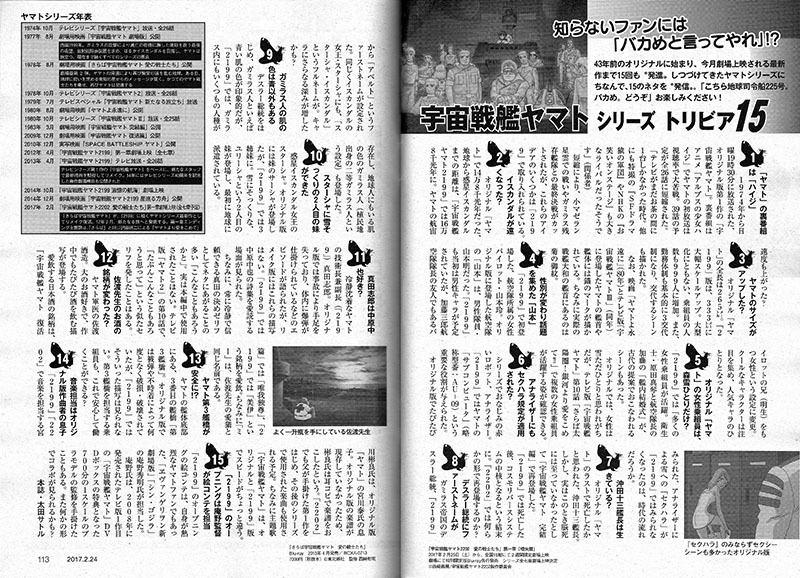 The original Space Battleship Yamato series began broadcasting in 1974 at 7:30pm on Sundays. Its counter-program Girl of the Alps Heidi was in the same time slot, which created a hard fight for ratings. Yamato’s 39-episode story plan was reduced to 26.

“That was a time when there was only one TV, in the living room. The other big rivals were the SF drama Monkey Army and NHK’s Comedy on Stage.” – an involved person

Because of the reduction, the final decisive battle in the Small Magellanic Cloud and the battle with the surviving Gamilas fleet were cut. Some of those ideas were adopted in Yamato 2199.

In the original Yamato, the distance from Earth to Planet Iscandar was 148,000 light years, but in Yamato 2199 it was increased to 168,000 light years. Did Yamato pick up speed?

The total length of the original Yamato was 265m. The 2199 edition was substantially scaled up to 333m. Along with this increase in size, the number of crew members was also increased, to 999 people. In addition, the duty system became three basic shifts and scenes were shown of shifts changing.

In the movie Be Forever Yamato and the TV series Yamato III (both released in 1980), an anchor mark was depicted, appearing on Yamato‘s bow and hull. By the way, there was a chrysanthemum crest on the bow of the actual Battleship Yamato.

Akira Yamamoto, the female in the air corps, first appeared in 2199. The Yamamoto who appeared in the original version was a male also named Akira Yamamoto. Initially, Akira Yamamoto was planned as a male character for 2199, but the concept changed to be her older brother (Akio), who was a friend of Saburo Kato in the flight corps. This cool character attracted a lot of attention and became a favorite.

5. Yuki Mori was originally the only female crew member of Yamato?

In 2199, there are many active female crew members. Hygienist Makoto Harada and flight captain Kato had an “onboard wedding” scene at the suggestion of Kodai.

In the original, Yuki Mori tended to be the only woman on board, but in the “Farewell to Earth” episode, many female crew members can be confirmed.

Analyzer, the familiar red robot of the series (abbreviated model number: AU-09), was given the important role of Yamato‘s “sub-computer” in 2199. Due to the flow of the times, his frequent “sexual harassment” of Yuki in the original version is no longer seen in 2199.

Captain Juuzo Okita was thought to be dead at the end of the original Yamato. However, he did not reach actual brain-death and he reappeared in Final Yamato. At the end of 2199 he died and became the core of the Cosmo Reverse System. Will he reappear in some form in 2202?

In 2199, the first name of Dessler, leader of the Garmillas Empire, was established as Abeldt. Likewise, Starsha, the Queen of Iscandar, was given the full name of “Starsha Iscandar.” Will there be more of this?

9. Garmillas people with a skin color other than blue

The blue skin color of Leader Dessler and the people of Garmillas is striking, but in 2199 other Garmillas races appeared with the same skin color as Earthlings. (The concept is that they are second-class Garmillas from colonies.)

10. A second sister was created for Starsha who looks like Yuki

Queen Starsha of Iscandar had a sister named Sasha in the original version, but in 2199 it became three sisters. A second sister appeared named Yurisha, who looks exactly like Yuki, and she was dispatched to Earth first.

Shiro Sanada, Yamato‘s cool and calm technical chief in 2199, lost his limbs in the original due to an accident. In one episode, it was revealed that bombs were set into his body. There was no such depiction in the remake. In 2199, there are scenes of him reading a book of poetry by Chuya Nakahara.

By the way, there were many times when the calm, reliable Sanada had lines like “just in case something like this might happen,” but they haven’t come up with one yet in the new story. In Episode 10 of the original Yamato 2, he uttered a similar line: “I thought this might happen.”

Yamato‘s surgeon, Dr. Sakezo Sado, is frequently depicted drinking large amounts of alcohol. In Yamato Resurrection, the brand of sake he drinks is Yuigadokuson, but in 2199 he enjoys Umii, which resembles the name of his beloved cat Mii.

In the original edition, Yamato‘s “third bridge” at the bottom of the ship is frequently hit, damaged and destroyed, but there is no such depiction in 2199. Can the crew working in the third bridge finally work in peace?

14. The son of the original composer is in charge of the music

Akira Miyagawa, who is in charge of the music for 2199 and 2202, is the son of Yamato‘s original composer, Hiroshi Miyagawa. Because sheet music didn’t exist from the original, it is said that Akira remade all of it by ear. 2202 will use his father’s music from the original and other pieces from later series will also be used. By the way, the Yamato theme song is slightly sped up from the original in 2199.

15. Director Anno was in charge of storyboards for the 2199 opening

The storyboards for the opening title of 2199 were created by Hideaki Anno, an ardent Yamato fan who was also in charge of Neon Genesis Evangelion and Shin Godzilla. Mr. Anno also supervised a 1/700 plastic model that became a bonus item with a remastered DVD box of the first Yamato TV series in 2008. Maybe there will be another kind of collaboration?