Hi everybody! Just so we can get acquainted, I was one of those fans who grew up in the 80’s and ran home from school each day to watch Star Blazers. It never left me and I think it has something to do with the person that I am today. I’ve written fanfic stories, I draw a little bit, and in the late 90’s I found some Star Blazers fans who were throwing a little convention that has since become a big convention: Anime Weekend Atlanta.

My mom helped me make a Desslok costume (actually, I helped her make it) and it got me into the convention for free. I’ve been going almost every year since then. Now I throw a yearly party there for “veteran fans” called Dessloktoberfest. I originally wanted it to be like the Japanese Yamato Party Convention, only with a Gamilon theme. I thought it would be nice to do good things in Desslok’s name for a change. (Side note: I can say with pride our party has brought four couples together since 1998 and they’re all still together, some of them now married with families. One of them was even Amy Howard Wilson, the voice of our beloved Nova! It’s nice after all that War that His Majesty Desslok can spread a little Love.)

Now that we’ve got that out of the way, let’s get on to the topic I’m here to write about: Japanese Yamato Doujinshi.

“Dough-Jin-Shee” are self-published comics made by Japanese fans. Doujinshi is a made-up word which comes from two Japanese words. “Doujin,” which is the word for club (as in fan club, not like a club sandwich, unless everyone in the club comes together to make one) and “shi” which is ripped from Zasshi, in exactly the same way we ripped Zine from Magazine.

Usually a doujinshi is the work of a fan club (sometimes called a “circle”) that bands together to make something based on their common interest. It can be comics, fan fiction, limited-run model kits, computer games, and more. The word may be due for an update as more arts and crafts are produced!

Fandom in Japan is a little bit different than it is in America. For a more detailed look than we’ve got room for here, there are some great resources that show how Japanese fans live, and how Japanese anime fandom evolved. The most recent is an anime series called Genshiken (DVDs available from Anime Works, manga from Del Rey). It’s an engaging comedy/drama about a college club and the struggle between fan life and real life. Another great anime program is Otaku no Video (DVD available from Animiego), which is a pseudo-documentary with a hyped-up anime story about fan clubs and the lengths to which their obsessions can go. There are other such stories, but these two are the best ones to start with.

There are some big differences between how the US and Japanese fans got started. Unlike us, Japanese kids couldn’t run home from school to watch the show since it was aired on Sunday nights. And only one episode was shown per week! When it first aired, it had some fierce competition: another show called Heidi, Girl of the Alps was the number one cartoon in that same time slot. She may have looked tiny and cute, but that little Slavic maiden absolutely crushed Yamato in the ratings. Madness! 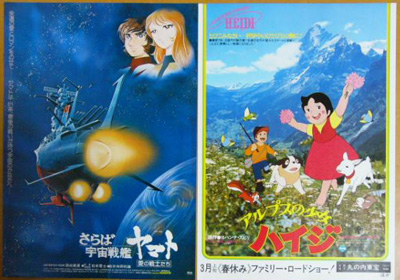 Despite a couple of scattered reruns, it wasn’t until the movie came out in 1977 that things really got going, and even then, unified fandom was still out on the fringes. But like our homegrown Trekkies, some Japanese fans missed the show after it went off the air, and they took matters into their own hands to keep the Yamato story alive.

In my travels through the internet tubes, I’ve been lucky enough to find some Yamato doujinshi. How? There are a few places to look. One is just plain old Ebay, but there are others closer to the source, chiefly the auction listings on Yahoo! Japan. If you’re unable to read Japanese, there are bilingual bidding services to help you out, such as Rinkya , Celga , and a subscription service called Comiket . If instead you can find yourself a Japanese pen pal who knows something about Yamato, so much the better.

After you read and study these things for a while, it’s inevitable that the work of some artists will stand out and inspire you to find more of their doujinshi. As an example, I’d like to share with you three of my favorites: Zenta Mizuno, Bisokko, and Ayu Hirano.

I first learned about Zenta Mizuno from my pen pal. I’d seen his art on his bulletin board but I didn’t know he’d published anything until I found his doujinshi while browsing Yahoo Japan. My pen pal was corresponding with him, and through her I was able to get permission to use a piece of his art for the 2003 Dessloktoberfest. 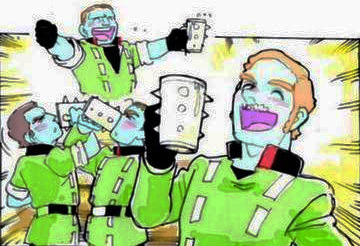 Got beer? That foam’s not Rabies! Gamilons Enjoying themselves with giant spiky steins. You’ll put your eye out, kid!

Mizuno’s character designs are reminiscent of Miyazaki. His mecha designs, though not exactly Matsumoto’s, seem to be more about function than looks. The Yamato Notebooks he releases each year show his respect and admiration for the series through the original background characters he’s created. The stories are more hard science compared to Matsumoto’s vision which occasionally sacrifices plausibility for art. He definitely looks at how Star Blazers would be a livable universe and puts that into his fiction and comics. 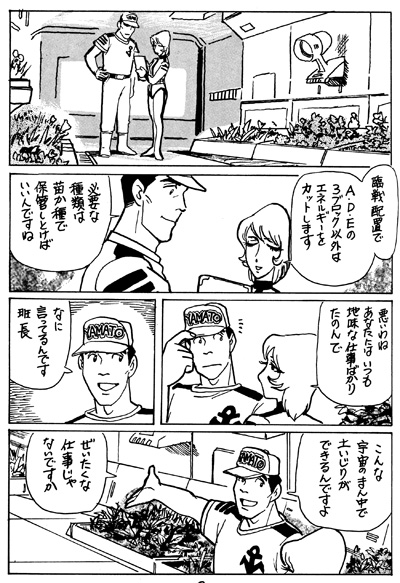 Not that she couldn’t do the farming too, but it’s nice to see Nova delegating authority once in a while. In this case, it’s to the hydroponics staff. (Not tomacco. Toe-may-toe.) 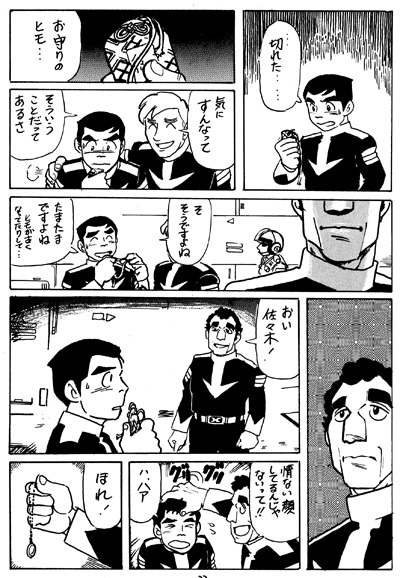 Hey, more Black Tigers! These guys aren’t played by a boy band, so you didn’t see them. I kid because I love.

Amazing Stories of Yamato by Bisokko

Bisokko (which is her pen name) is the owner of Double-Planets, an outstandingly funny website parodying the adventures of the Yamato cast. Her work is not too different from what you might see in Mad Magazine. Often she draws gag comics based on an incident in Yamato history. Please forgive me as my captions aren’t actual translations most of the time. All of these are from her doujinshi titled Amazing Stories. 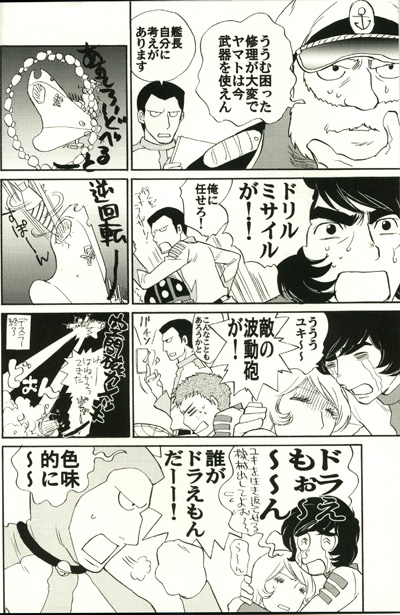 Sandor can fix anything! This comic crosses the streams, showing that Sandor is as useful as the robot cat Doraemon (dough-rye-eh-mon) is to his weenie pathetic pal Nobita. This isn’t the first Sandoraemon sighting for me. I’ve seen him once before in a trade paperback parody of Yamato and Mobile Suit Gundam. 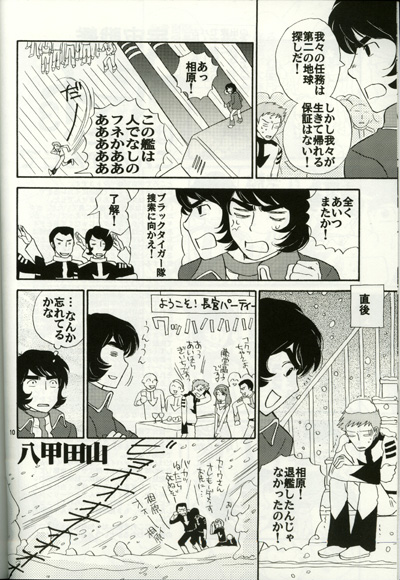 From Yamato III: Wildstar forgets to call the black tigers back in after finding Homer. D’oh! 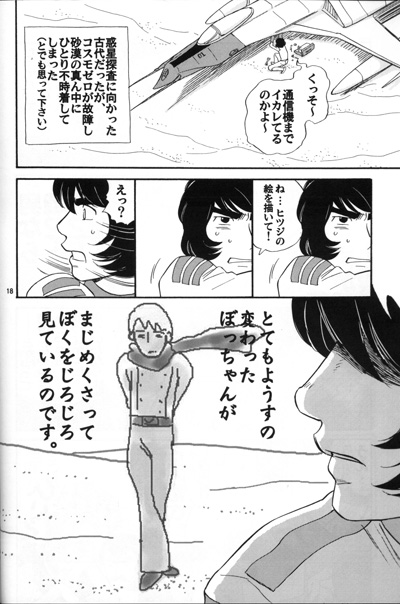 Wildstar’s plane went down in the desert and he’s trying to fix it. He thinks there’s not a single soul around for miles and is completely devoted to getting his plane back up into the air before he dehydrates. But suddenly he hears a voice behind him, asking something about sheep. Is the heat getting to him? He turns around to see…the Little…Prince? 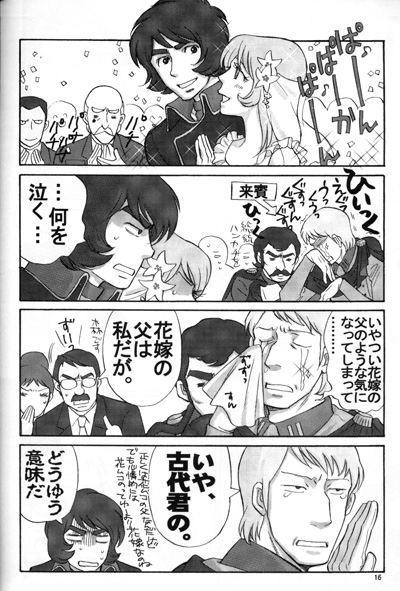 Have you ever wondered why Desslok was never invited to Derek and Nova’s wedding? I know I have. And now, I know why. He’d cause a ruckus. Watch Nova’s dad berate the Leader for ruining His Baby’s Perfect Day.

Lastly, I’d like to mention Ayu Hirano, my favorite of the three. She has her own unique style of character design. I like the rounded lines she uses on her characters, making them cuter than they would normally be. Also I think her style of humor may be similar to my own. Can you imagine if the Star Force was more like McHale’s Navy and the Gamilons were more like the zany Germans from Hogan’s Heroes? I love that idea!

Hirano’s doujinshi are sometimes four-panel gag comics, but other times she’ll just tell funny stories about the cast of Yamato having wacky adventures. The story will almost always call for Yamato and Desslok to meet again. Unfortunately she doesn’t have a website, but her output over the years has been enormous, so it’s not hard to find her work in the Yahoo Japan auctions. (I wish I could buy a lifetime subscription, so whatever she draws next would magically appear in my mailbox, but that is not to be.) 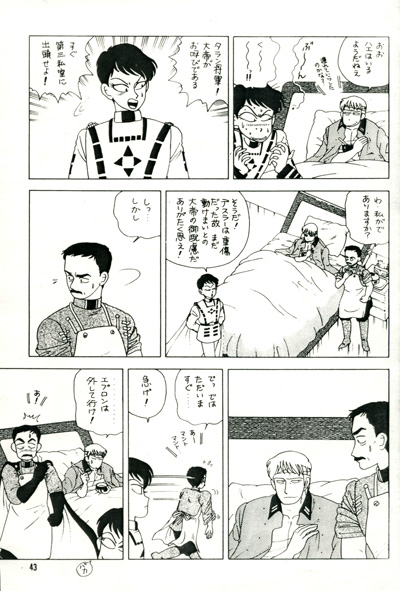 Who’s gonna keep that appointment with Zordar? If Desslok goes, he’ll unzip like a jacket! Aim for the Ace, Talan! But take that apron off, first. 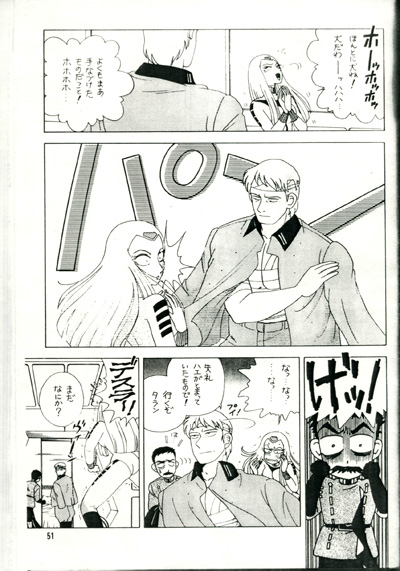 Zordar gives Talan some special get-well tonic for the Leader, but Invidia’s up to mischief. There’s a tug of war and Talan breaks the bottle. Invidia demands satisfaction for the mess and Desslok puts his life on the line to save his friend from humiliation. Invidia mocks them. Does this count as violence against women? I don’t think so. She’s really mean. I don’t know why that picture is so satisfying. 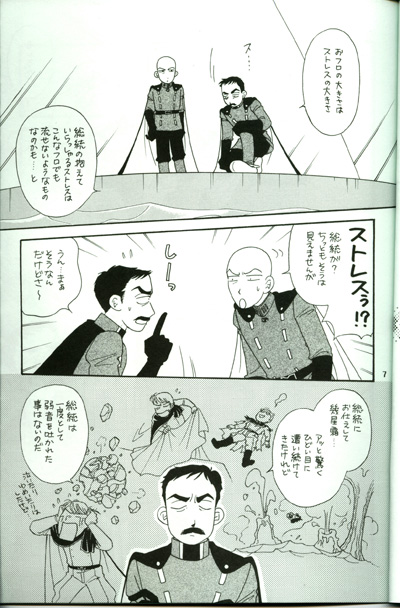 In another comic based on Yamato III, Keeling fails to see the justification for the Royal Baths. Talan explains big stress needs a big bath for big relaxation. 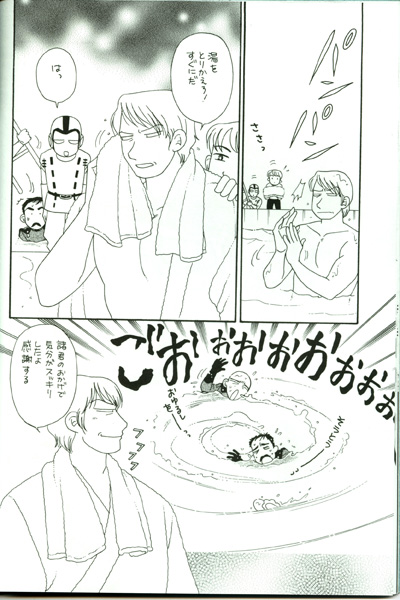 Talan’s just trouble. They have a fight and fall in. Unfortunately Desslok was having a bath when it happened. No, they won’t need the ladder. Yes, that’s exactly what it looks like. Is that a counterclockwise spin? Wow, so that’s how they clean the pool!

So that’s part of my collection! Be careful, new doujinshi hunters; the authors shown here are basically family-safe, but some fan comics have adult content that isn’t for everyone. And finally, to give you a sense of what you’ll see on your travels, here are some more samples of what flows through the digital wonderland.

Meet the doujinshi authors in our report on Yamato Party 2009!