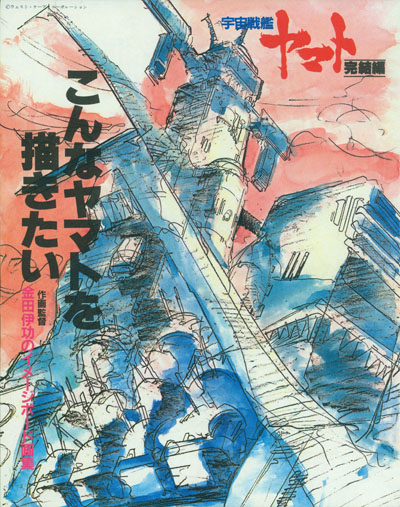 Animator Yoshinori Kanada’s first brush with Yamato was on Series 1, but his first real impact on the saga was in his work on the climax of Farewell to Yamato in 1978. Afterward, he rose through the ranks to direct animation on a few Series 2 episodes, then much bigger sequences for Be Forever and Yamato III. When it came time to develop Final Yamato, Executive Producer Yoshinobu Nishizaki elevated him even further to the level of concept artist. One of Nishizaki’s goals for the finale was to find new ways to visualize the ship, and he knew exactly who to hire for that job.

This article in Animage #50 was the first to showcase Kanada’s work in preparation for an art book to be published a few weeks later.

I Want to Draw This Yamato

TEXT A: “Up until now, it has taken time to complete the storyboards from the script, and there’s no longer enough for drawing. To solve this, I wanted to complete these images prior to the storyboarding, for the animators to use as image boards. As a result, we focus on the visual aspects that we want in the work this time.”

Based on this production approach described by Producer Yoshinobu Nishizaki, Yoshinori “Iko” Kanada drew the image boards that make up this portfolio. Since of course this is a “proposal,” it is still undecided whether all the illustrations shown here will appear in the finished work. But you get the feeling from any of them that “it will be wonderful if it does.” 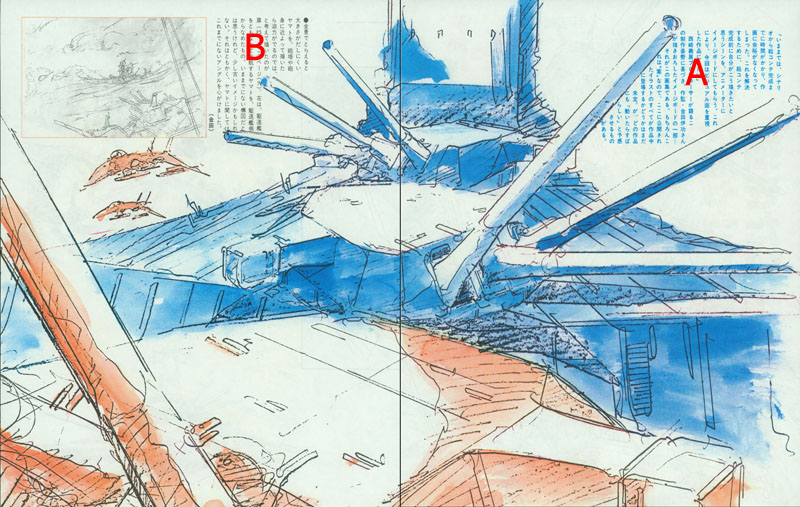 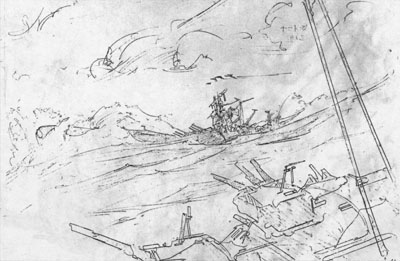 TEXT B: It is hard to capture the size of Yamato in a single view, but its force comes out if I draw the gun turret and gun barrel close up. At left is Yamato sailing alongside a destroyer, as seen from the destroyer side. It may be a somewhat antiquated image, but I don’t think a composition like this has appeared before. At any rate, I kept unprecedented angles in mind for Yamato. 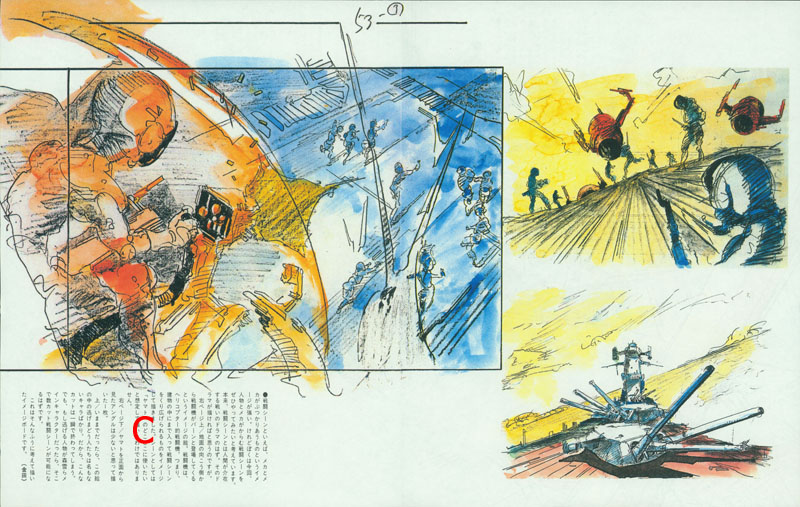 TEXT C: Speaking of battle scenes, the image of mecha clashing with mecha is strong. But this time, we wanted to try and involve people with mecha in combat scenes by all means. The drama of a battle scene should come from human intervention in the fight. I think I can create great drama from that.

Right side page, upper half: image of a war-type machine that emerges and fires from over the horizon. A fighter or an attack helicopter enters into a building, and I pictured a battle scene developing from that. It wasn’t necessarily drawn on the assumption that it would be used for a scene in Yamato.

Right side page, lower half: I drew Yamato from the front, since I don’t think it’s been seen from that angle very often.

Above: There are always nameless characters running this way and that trying to escape as in this picture. Therefore, such a shot will be over in an instant. But if the escaping person is Yuki Mori or another main character, it should lead to a larger number of shots. This image board was drawn with that in mind. 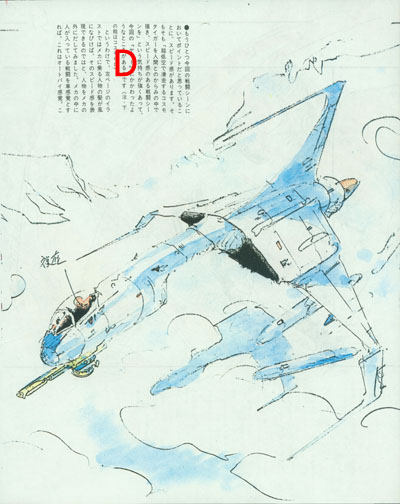 TEXT D: Note regarding the Cosmo Zero: I think another point about this sort of war scene is a feeling of speed. First of all, there is a strong feeling that, “if I draw a Cosmo Tiger to fly at a super-low altitude near human beings it will give battle scenes a feeling of speed” and this could involve Yamato in some way.

Therefore, if the hair of the person who rides on the mecha illustrated to the left is flying in the wind it can express a feeling of speed, so I tried to take the person outside the mecha. If you compare a person going into battle in a mecha to riding in a car, then this would feel like a motorcycle. If I draw it this way, I think the feeling of wind could be put in the storyboard.

If I was to participate in Yamato this time, I wanted to do as much as possible by myself. As opposed to drawing pictures based on storyboards, I offered to participate in the pre-storyboard stage and took that on. Now I’ve done about forty sheets of image boards, and I’m worried about how much of my image will be adopted into Yamato by Yoshinobu Nishizaki. Honestly, my mental state right now is one of, “I want to do just one more shot of what I want to see.” 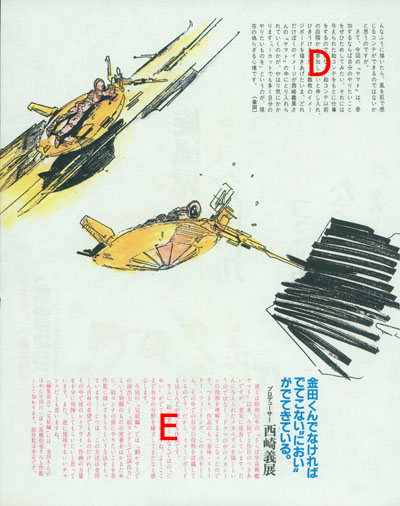 Without Mr. Kanada, that “scent” will not come out

We have been involved in three productions starting from Farewell to Yamato in 1978, and we’ve been growing steadily. Instead of just drawing a given mechanism, he has come to understand the role of mecha scenes in a story. In other words, he seizes on the three points of meaning, story, and feeling of the work to recognize the role they play internally. Therefore, the image boards are very useful to the work.

Furthermore, Mr. Kanada brings a unique “scent” to his pictures. I’m impressed by how he has established himself in his own field.

For the Final Chapter, in order to unite the “direct power of movement” with the “direct power of a storyboard,” by taking the method of describing what we want to do before the storyboard stage — in fact, this method is Mr. Kanada’s hope as well — I think his layout and drawing ability should be fully realized in it. Still more, I rather think it’s a good chance to demonstrate it.

Editor’s note: In addition to Mr. Kanada, Kazuhiko Udagawa and Shinya Takahashi have also joined the Final Chapter as supervisors. The general director has not yet been decided. 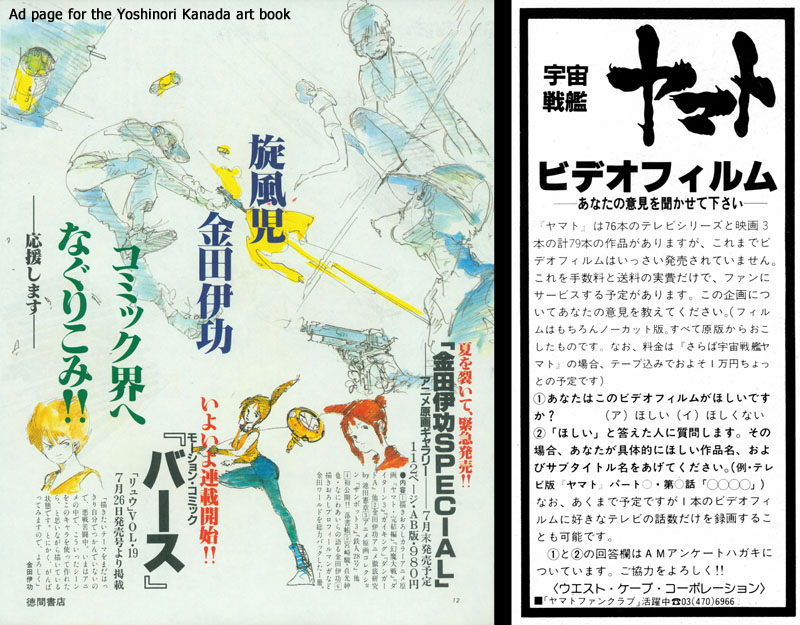 There was one more mention of Yamato deep within this issue of Animage, in the short message shown above right. Based on the translated text, this would seem to be one of the first steps toward the home video era.

Please tell us your opinion.

Although Yamato has a total of 79 TV series episodes [sic] and three movies, so far there are no video films on the market. We have a plan to serve fans for only the cost of shipping and handling. Please tell us your opinion of this project.

(The films are uncut versions, of course. All originated from the original master. In the case of Farewell to Yamato, the rate is scheduled to be approximately 10,000 yen [about $100 US] including the tape.)

In that case, give the specific name of the work that you want, and also the episode title. (Example: TV series Yamato part _ episode _, “_____”)

In addition, and this is only a proposal, it is also possible to record only your favorite TV episodes onto a video film.

Send your answers on the attached Animage postcard. Thank you for your cooperation!