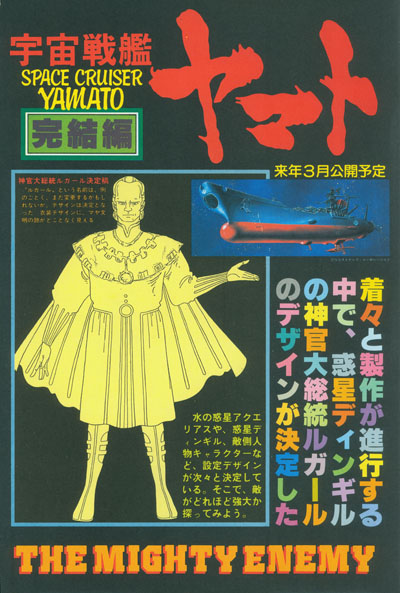 Scheduled for release next March

The production proceeds steadily, and the design of the High Priest Emperor Lugal of Planet Dengil has been decided

Text at upper left of Lugal:

“Lugal” is the given name, but as usual it is subject to change. A trace of Mayan civilization is somehow visible in the costume design.

Text at lower right of Lugal:

Designs for Water Planet Aquarius, Planet Dengil, and the characters on the enemy side have been decided in sequence. Therefore, let’s investigate how powerful this enemy is. 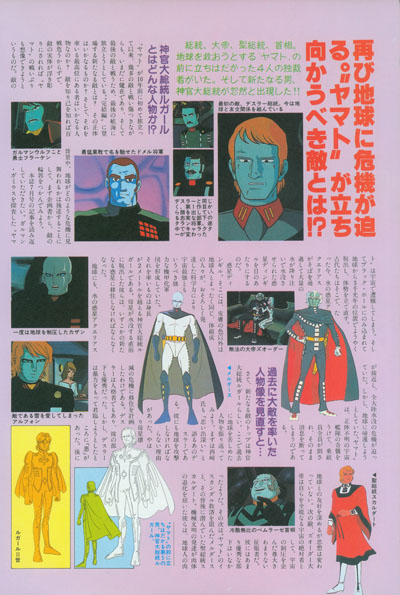 A crisis approaches Earth again. Which enemy does Yamato confront with it?

A president, a great emperor, a supreme commander, and a prime minister. There were four dictators who stood in the way of Yamato when it tried to save Earth. Now, a high priest suddenly appears!!

What kind of person is high priest emperor Lugal!?

Since Yamato launched for the first time ten years ago, it has fought many enemies despite taking severe damage, and is still in good health to fight the last enemy on its last voyage. What about the new enemy who appears in the Final Chapter? What is their true nature? And what kind of person stands at the head of it? Going by the old saying that “Know thy enemy, know thyself, and you need not fear even a hundred battles,” if we bring the enemy’s true nature into relief, we might guess how Yamato will fight them. Later we’ll examine the enemy’s background and what kind of crisis hits the Earth this time. First, let’s get an outline of the enemy from the proposal.

We’d like you to reread the article in the July issue of this magazine. Yamato investigates Galman-Gamilas after an accident occurs in space. The ship is swallowed up in a black hole 3,000 light years from Earth, but escapes and recovers. At that point, Kodai and the others witness the planet Dengil being flooded by a huge amount of water pouring off the passing planet Aquarius. 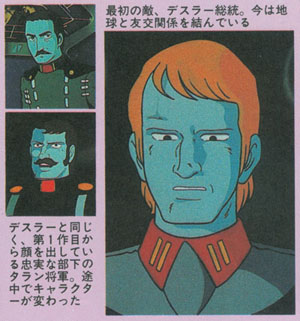 The first enemy, president Dessler. He is now
a friend of Earth. General Talan was the faithful
subordinate who also appeared in the first work.
His character also changed along the way.

Planet Dengil. Other than the color of their skin, the people have the same biology as Earthlings. They have developed space science to an incredible degree and have formed a powerful mechanized army. The commander is high priest emperor Lugal, who is more than two meters tall. They escape just before their mother planet is submerged and have to find a new planet somewhere else. 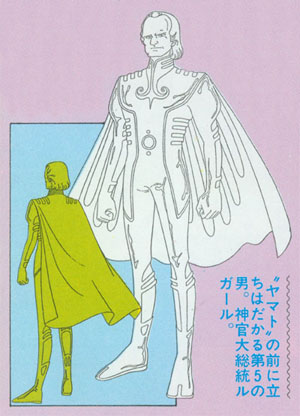 The fifth man who stands in the way of
Yamato, high priest emperor Lugal.

The water planet Aquarius also approaches Earth, and a crisis of full continental submersion is imminent. However, as Yamato tries to return to Earth, they are hit in a surprise attack by an unknown space fleet and everyone is defeated before they can report the news.

When we review those who were powerful enemies in the past…

The leader of the new enemy seems to be the high priest emperor Lugal. Let’s look back at the people who tormented Earth in the past. First there was Dessler, who Mr. Nishizaki describes as “unforgettable.” There was a reason for him to attack Earth. After all, he was planning to emigrate there because his home planet was in crisis. Dessler was a man of integrity, and his subordinates were excellent as well. However, Dessler’s “evil” was to dominate through violence. Although his friendship with Earth has deepened, he has not changed.

The next enemy was Emperor Zordar of the almighty White Comet, an arrogant conqueror who plotted the subjugation of all space. He did not seem to have excellent subordinates. Next was Meldars, who obstructed Yamato from aiding Iscandar, with Supreme Commander Skaldart lurking behind him. Their development of a machine civilization lead to the degeneration of their physical bodies, and they invaded to take the flesh of Earth people. Yet, there was Alphon, a cyborg with a human heart. Then there was Prime Minister Bemlayze, a ruthless coldhearted barbarian. Now, which type is Lugal? 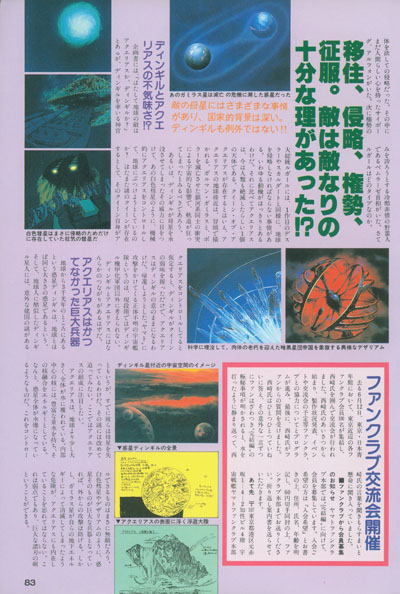 Migration, invasion, power, conquest. Do the enemies have a good reason to be called enemies?

There are various circumstances on an enemy’s home planet, and nationalism runs deep. Dengil is no exception!!

The mystery of Dengil and Aquarius!?

The plan book asks, “is Aquarius really the enemy of Earth, or is it Dengil?” For high priest emperor Lugal, it is the same as it was with the White Comet, Dessler, and Skaldart; the circumstances are that Earth must be invaded. There is a so-called clear motive. Compared to that, Aquarius seems to be on a path to annihilate the people of Earth. There is a Queen of Aquarius, and it is could be that the orbit went crazy after the galactic collision at the beginning that caused the extinction of both Galman-Gamilas and Bolar.

Or could it be that after the Dengil lost their mother planet, they fixed their eyes on hitting the Earth by controlling Aquarius, like the White comet? The queen is a mystery, and assuming that this queen has control over Aquarius, Dengil may be holding the queen and using Aquarius at their will. At present, it is not thought that the unknown space fleet that attacks Yamato on its return trip is anyone other than Dengil.

There must be a certain relationship between Dengil and Aquarius.

The huge weapon of Aquarius is unprecedented

Dengil, which is 3,000 light years from Earth, is said to be about the same size as our planet. The people of planet Dengil are very similar to Earthlings, and it is said that there is a mystery behind the founding of their nation, but they have already lost their home world. We’ll look into that mystery at another time. Here, we want to focus on the composition of Aquarius.

Aquarius is slightly larger than Earth, and entirely covered by water. The central core is rich in heavy water, and assumed to have the energy of nuclear fusion. The entire planet has virtually become a hydrogen bomb. Whoever can control this is unbeatable. Like the White Comet and Dezarium, if the planet itself becomes a huge weapon, attack from outside can be prevented. However, just as Planet Gamilas became extinct by its own underground energy, don’t forget that this is also inherent to Aquarius. This is a weak point, and could be called a double-edged sword. 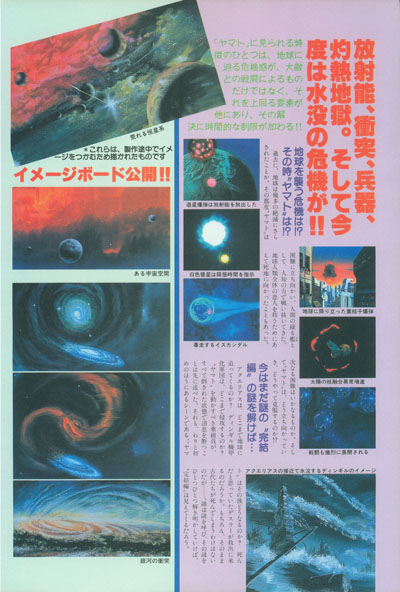 Radioactivity, collision, weapons, burning hell. And this time the crisis is flooding!

One of the features found in Yamato is the sense of Earth in crisis, not only due to battles with powerful enemies, but also other elements over and above this, and time constraints to boot!!

Earth is threatened by a crisis!? What about Yamato!?

In the past, those on Earth have been exposed to extinction many times. As a warship, Yamato has confronted challenges each time, and humans fought back with the power of their intelligence. It has gone into the jaws of death as a benefactor to save all the humans on Earth. What will be the next challenge? How will Yamato confront and conquer it!?

If the mystery of The Final Chapter can be solved now…

How much of a threat is Aquarius to Earth? How far will the Dengil military go to invade?

As it was said earlier, the crew of Yamato was in a state of defeat and unable to communicate. It has also been learned that this scene occurs comparatively early. What happens to Yamato after that? Could Dessler, who was thought dead, come to the rescue? Of course, Kodai cannot simply die. It is a mystery inside a mystery, and when we see The Final Chapter, the mysteries will be explained one by one.