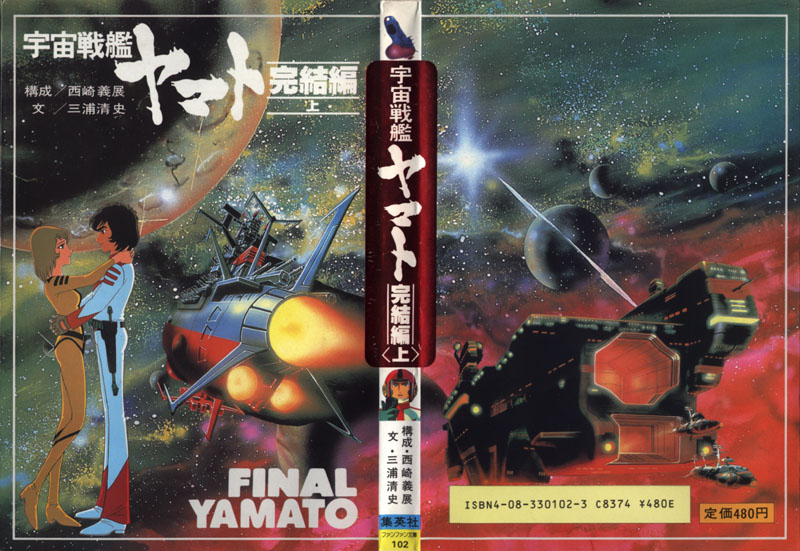 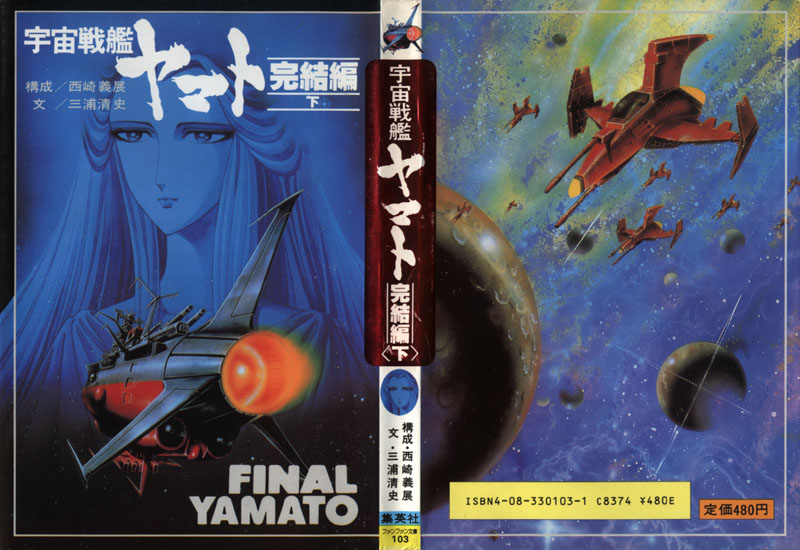 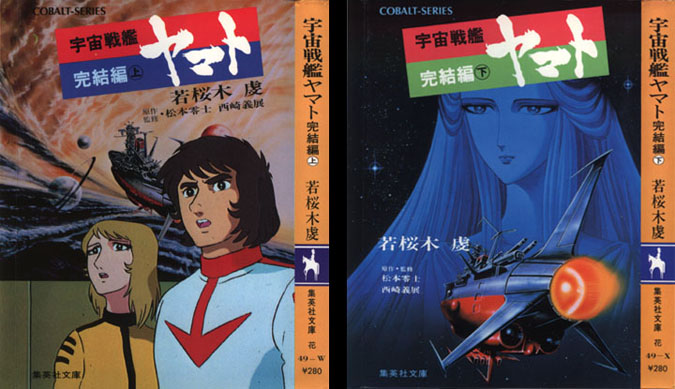 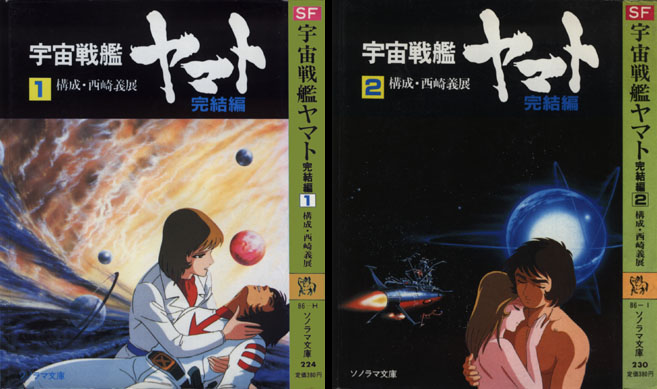 Softcover; 8 pages of color stills in each
15 b&w pages of design art in volume 1, 9 pages in volume 2

Read the epilogue from the second volume here.

Softcover; 8 pages of color illustrations in volume 1, 16 pages in volume 2 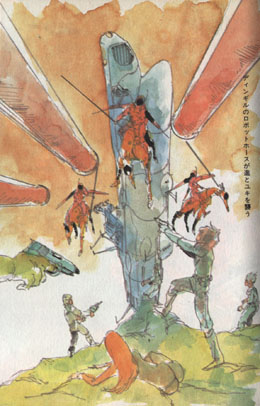 As a rising, energetic SF writer, the assignment to novelize Final Yamato came at a pivotal time in Keigo Masaki’s career and he approached the story—which brought the monumental 10-year Yamato franchise to a shattering conclusion—as a representative of the fans. The first purpose of a novelization is to stay loyal to the source material, but you can usually see the personal agenda of the writer at work. I’ll maintain my sentimental perspective while examining the topic of modification.

Life and death. Justice and evil. Despair and hope. Can the breath of life bring miracles even in the sea of stars?

As in the first part of the movie, Kodai takes responsibility for a tragic loss of life and resigns his post as Yamato‘s captain, and his relationship with Yuki becomes troubled. I disapproved of Kodai when I saw this and thought Yuki should have done more about it. Their relationship had been strengthened in the previous story, but I felt it still should have gone farther by this time and it seemed like the author shared my feeling. 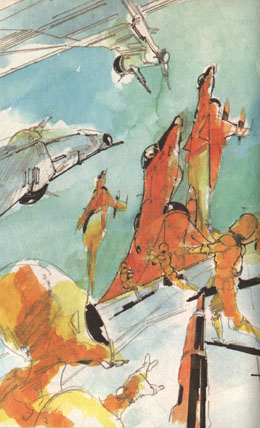 Also Kodai’s close friend Shima laments the heavy hand they’ve been dealt. To sum up his feelings; “whoever wrote this fate for us was a cruel man.” We see him in soccer practice with his younger brother before Yamato‘s launch, and later writing him a letter. Both scenes are real tearjerkers that were cut from the first release of the movie and restored to the 70mm version.

The subject of Captain Okita’s revival is brief but treated with care, examining the process of his return to life. He is purposefully reunited with Kodai before the launch scene, which deepens their father-son relationship. There is also a drinking scene between Okita and Dr. Sado that was preserved from the original movie script. Seeing the interchange of these two old heroes who always supported Yamato from the shadows is quietly moving. It’s regrettable that this scene was not restored to the 70mm film version.

When Dessler rushes to the aid of Yamato he is still carrying the anguish of losing his home planet in the galactic collision, and crashes into the mothership of Emperor Lugal to distract him. It’s a spectacular death, the explosion blooming like a flower, proving his friendship with Yamato. In the film, Dessler defeats the enemy and presides over Yamato‘s last moments with tears in his eyes, quite a different fate. That’s a good ending, but the novel elevates him to a higher level which seems more natural. 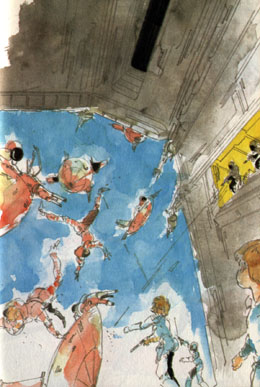 On the other hand, the cold-blooded dictator Emperor Lugal was more prominent than in the movie. I was doubtful about how in the movie he dismissed his own family, caring more about his nation and the “strength and power of justice.” The fate of the Dinguil boy who was saved by Yamato is particularly spine-chilling. The author wants you to look past your disgust into the darkest side of the heart, which we all have to some degree. (On the other hand, I was getting attached to the boy so I’m sorry that his time with Yamato ended.)

There’s a scene in the first volume where a man surpasses the weight limit when he tries to get on an Earth emigration ship, and decides to tear off his clothes. There’s also a scene where fighter pilot Kato and his father say goodbye to the brother who died. In the second volume, Tokugawa pledges his life to the relief of Earth after the Aquarius flood. There are many cameos by background characters that come alive and tell you more about the author’s views. The epilogue is rather lightly written, but Yoshinori Kaneda’s ending cartoons are a pleasant substitute.

Click here to see a gallery of Kaneda’s cartoons.

Other than this, there are also novelizations published by Sonorama and Shueisha. Both follow the movie script while telling you a little more about each character’s state of mind, though Dessler also dies an honorable death in the Shueisha Cobalt version. The epilogue of the Sonorama version does the best job of articulating the theme of the story. 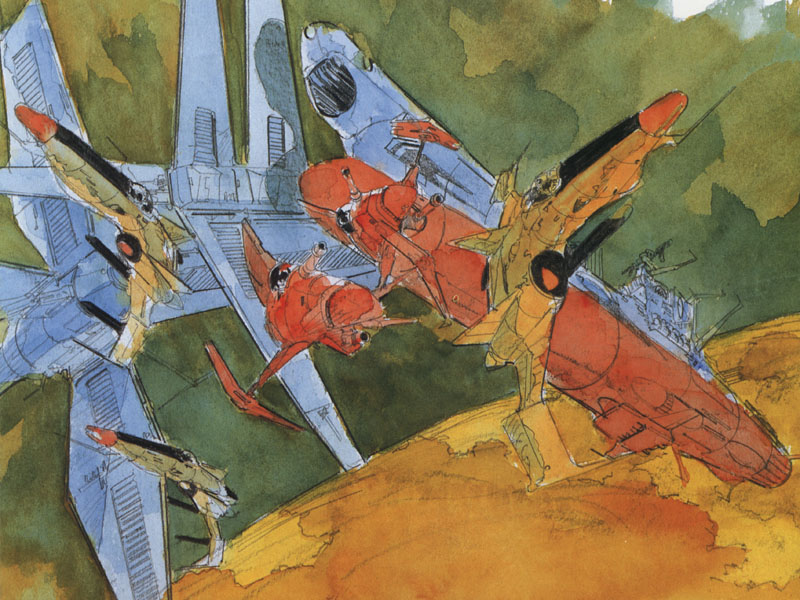 Finale from the AM Juju novelization:

From the captain’s seat, Captain Okita stared in the direction of Earth.

“Earth, take care of them. Well, Yamato. We go to our final mission.”

To Yamato‘s rear, Aquarius steadily came closer. As it approached Earth, the surface of its ocean was raging like a storm. It grew more intense as it loomed toward Earth. On the other hand, thick clouds began to cover Earth’s skies, winds blew, and a torrential downpour fell.

Yamato waited patiently over Aquarius, enduring the gravitational pull. Captain Okita looked out the window at the sea on its surface. His hand tightly gripped the trigger of the Wave-Motion Gun. Aquarius finally began its closest approach to Earth. It was only a matter of time before a water column would reach out.

Suddenly, the ancient disc-shaped spaceship of Lugal appeared out of nowhere in space near Earth and Aquarius. On its antique bridge, Lugal drew himself up to his full height.

Somehow, he had escaped Dessler’s attack and came here. All the guns on the old ship turned toward Yamato.

Captain Okita hadn’t noticed the old disc-ship approaching from behind. All of his senses were turned toward the surface of Aquarius. His expression was tense. The sea level of Aquarius’ ocean came alive, rising like a mountain. It was a spectacular view. At the same time, the ground was torn on Earth as a huge earthquake began. The attraction of the two planets was beginning to have an impact. 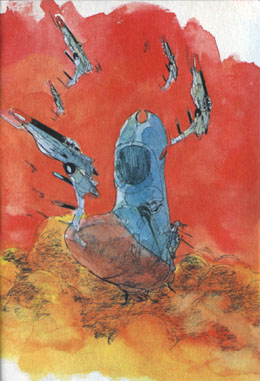 Lugal’s disc-ship had Yamato directly in its sights as it came closer.

Lugal’s face was a rictus of insanity, and he seemed to be laughing. Suddenly, a shout came from the radar officer.

“Enemy battleship coming in from the stern!”

Lugal saw it on the video panel – Dessler’s battleship!

“Ram it at full speed!” Dessler shouted, smiling. Lugal was struck silent for a moment, but then rushed out an order.

“Evade the hostile craft and open fire on Yamato!”

“No good, we can’t avoid it!” cried the radar officer.

Dessler’s battleship smashed into Lugal’s old spaceship from underneath, a direct hit. Dessler’s ship was ablaze as it ripped into the disc’s hull.

Dessler was knocked to the floor from his command chair. His ship was immediately consumed by a massive explosion. The old disc-ship couldn’t fire a shot. It turned like a leaf from the force of Dessler’s ship exploding.

A giant column of water grew like a creature from the ocean of Aquarius. Captain Okita’s hand whitened as it grasped the trigger. The column extended out, attracted to Earth.

Lugal crawled across his bridge deck on his hands and knees, approaching the instrument panel to grab the trigger of his own beam gun. An animal noise escaped his throat as his finger closed on the trigger. However, his ship was swallowed up by the huge water column from Aquarius, which now loomed toward Yamato.

Okita opened his mouth and both his eyes as he pulled the trigger of the Wave-Motion Gun.

Immediately, an unimaginable flash of light engulfed Yamato. A cross-shaped explosion burst out of the ship, and Yamato vanished in an instant in the massive burst. A second stage of light erupted from the first and expanded rapidly, breaking and scattering the water column. It had been interrupted by the enormous outpouring of energy and sprayed outward into space.

From the observation deck of Fuyuzuki, Susumu held his breath at this unimaginable scene. An explosive ball of white light stood between Earth and Aquarius, illuminating everything around it. 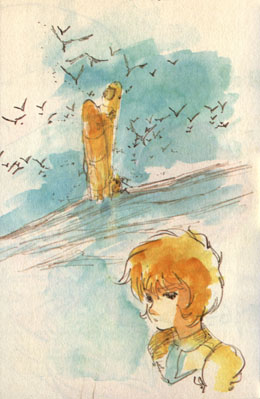 Its intensity bathed the faces of Susumu and the others who watched it through squinted eyes. There was no longer a trace of Yamato, nor of Dessler’s ship or Lugal’s ancient disc-ship. All had vanished in an instant in the explosion. The sphere of light was visible for nearly five minutes before it weakened and gradually disappeared. Afterward there was only a mass of water drifting around in space.

Susumu saw a vision there. The figure of Yamato with Captain Okita lying in the captain’s seat, as if asleep. The illusion of Yamato slowly sank into a sea in space. But, of course, there was no sea and no Yamato. But he could clearly see its ghost in his eyes, and it was visible to the others as well. Susumu raised his right palm in a salute. Each of the others began to salute as well.

Soon, the water planet Aquarius slowly drifted away from Earth. Susumu saw the form of the queen clearly on its surface, as if on a movie screen. Her ghost eventually faded and became the face of Okita. It vanished too, and the figure of Yamato appeared once more.

“Captain Okita and Yamato are leaving with Aquarius,” Kodai said.

“Kodai-kun,” Yuki answered, huddled against him. Her face was streaked with tears. But he did not shed any more tears. He only wrapped his arms around her trembling body and hugged her with all his strength.