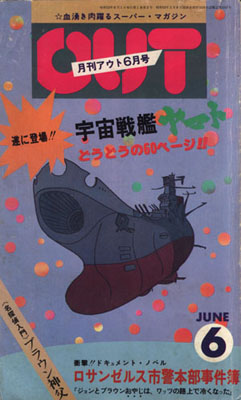 Though the creative genesis of the first Yamato movie is well known (if it’s not well known to you, click here to read all about it), its bumpy road to the promised land of Japanese cinema is a tale most English-speaking fans haven’t heard. In a very real sense, it came as the unexpected payoff on a blind investment. Producer Yoshinobu Nishizaki and the other members of his staff had worked too hard and loved their creation too much to let low TV ratings sound its death knell. Slowly, tirelessly, they sowed the seeds that would bring it back to life as a feature film (click here to read all about that) and were completely surprised by what sprang out of their garden.

The news that a full-length Yamato movie existed was broken in the June 1977 issue of a pop-culture magazine called OUT (which was actually on newsstands in April). OUT’s editor had made contact with a private fan club called Yamato Association, and worked closely with them to produce this landmark issue. It was the first time Yamato had earned its own cover story, backed up by a tremendous outpouring of creativity inside: 60 pages of interviews, story guides, a glossary called the “Encyclopedia Yamatonica” and more. (Learn all about OUT magazine and see its pivotal coverage here.)

This was the first time knowledge of the movie’s existence spread out beyond private clubs, and it was the pivotal moment at which the fan movement finally hit critical mass. Theatre owners couldn’t have paid for better advertising.

Nishizaki, who up to that point had only considered releasing the movie on the underground film circuit, took the fans’ positive reaction to heart and approached the Tokyu theatre chain to rent out a theater for limited screenings. Instead, they were impressed enough by the film to propose opening it in four Tokyo theaters on August 6th. Nishizaki would have to manage the promotional campaign, and he already had an army of fans ready to help out.

The premieres were like no movie opening ever seen in Japan. The film would premiere on a Saturday, and the Friday evening news breathlessly reported a massive turnout at theatres. Nishizaki and his key staffers saw the reports and rushed out to see for themselves what their labors had wrought. Animation director Noboru Ishiguro remembers that Nishizaki seemed intent on shaking hands with every fan in line. Leftover animation cels were handed out, starting a trend that would be repeated at many events over subsequent years. 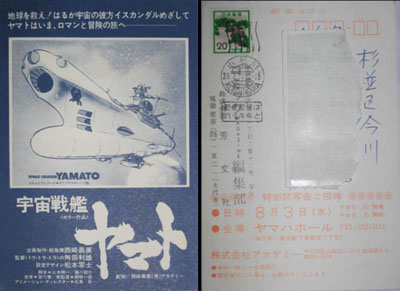 Above: original movie flyer and ticket stubs circa 1977.
At right: promotional postcard.

The next day, newspapers were filled with stories about the 20,000+ fans who had lined up overnight for the animated “children’s movie,” and even grappled with the topic of how the famous WWII battleship had been rebuilt into a space vessel. A trickle of merchandise became a flood and then a deluge. By the end of its initial run, the movie had mobilized 2.3 million people, made 2.1 billion yen at the box office, and another 930 million yen from merchandising. It was the first official Anime Boom, and the world would never again be the same.

Naturally, when the time came for home video releases, the Yamato movie was at the head of the line. Often sharing release dates with the other films, it was always first in everyone’s hearts as the one that started it all. 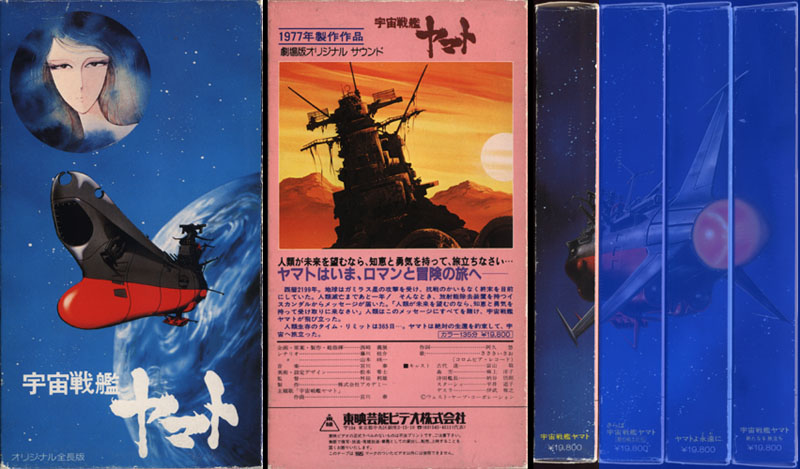 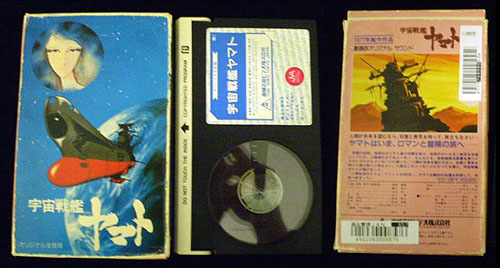 The video format wars were still in high gear when the very first tapes appeared in March to coincide with the theatrical release of Final Yamato. The first four movies were released simultaneously with an image of the ship spread across their spines (above right). The Space Battleship Yamato movie carried the first segment of this image, which was (fittingly) a painting done for Final Yamato‘s release. Surprisingly, VHS and Beta video tapes were also released by Nippon Columbia in 1983. Based on the scarcity of available images, it’s likely that these were sold in limited numbers.

Advertised in the Final Yamato movie program book, Victor’s VHDs hit the market one month after the film opened. They were more durable than tapes but still susceptible to the same sort of damage that could afflict LP records. Their packaging was more impressive, a large book-shaped plastic cartridge measuring about 10.5″ x 13″ with a disc inside. The entire cartridge would slide into a player to deliver the disc. Each side could hold about 45 minutes of stereo video, a good format for TV episodes but not so good for movies, which were unavoidably divided into chunks.

The Victor tapes were released in 1984, presumably after deals with Toei and Nippon Columbia had expired.

True home video connoisseurs lavished their time and money on visually superior and theoretically indestructible LDs by the mid 1980s. Nippon Columbia, long the home label for Yamato music, was the natural choice to release the MV series, an innovative set of programs that combined re-edited footage with symphonic scores. Read more about the MV series here.

A year after the MVs made their debut, Nippon Columbia followed up with their own handsome edition of Space Battleship Yamato on LD. Outer sleeve shown above, inner sleeve shown below. 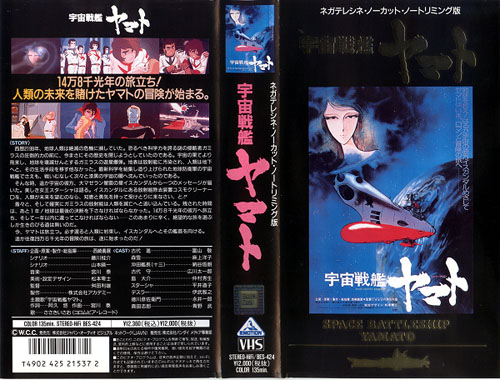 The entire Yamato video catalog found a permanent home with Bandai’s Emotion label in 1989 and got a repackaging on both of the winning formats. The LD was part of the first Yamato box set, called the “Perfect Collection.” Containing all five movies and a bonus disc of trailers and other artifacts (including the “hologram Starsha” footage), it also firmly established Space Battleship Yamato as the official English translation, laying the erroneous Space Cruiser to rest, at least in Japan. Both the LD box and the VHS sleeve featured gold-stamped logos. 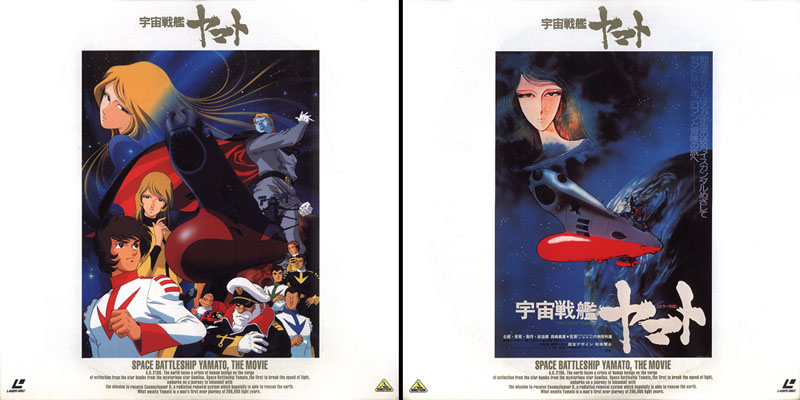 Since their first Yamato LDs were all limited to pricey box sets, Emotion addressed the need for individual releases in 1993, a year before Yamato‘s 20th anniversary. They sweetened the deal with stunning new jackets by anime designer Hiroyuki Kitazume (above) and extended liner notes on the inner sleeve (below). Also included was the original theatrical trailer and alternate footage. These were timed to promote the forthcoming Yamato 2520, which made its debut in 1995. 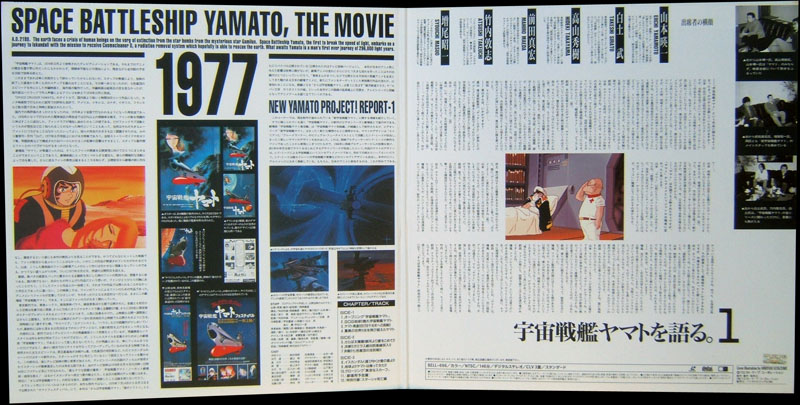 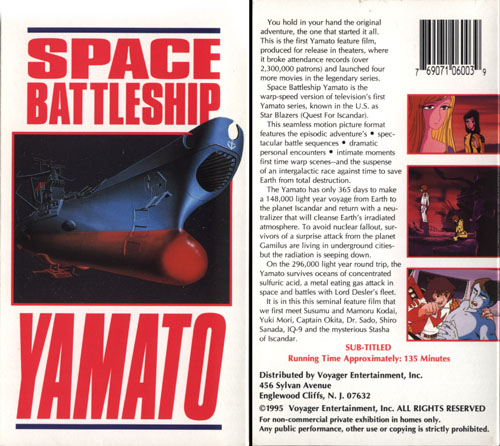 Space Battleship Yamato made its long-awaited US home video debut in September ’95, along with all of the other films and the three Star Blazers TV series. 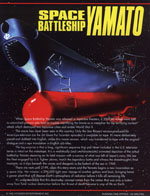 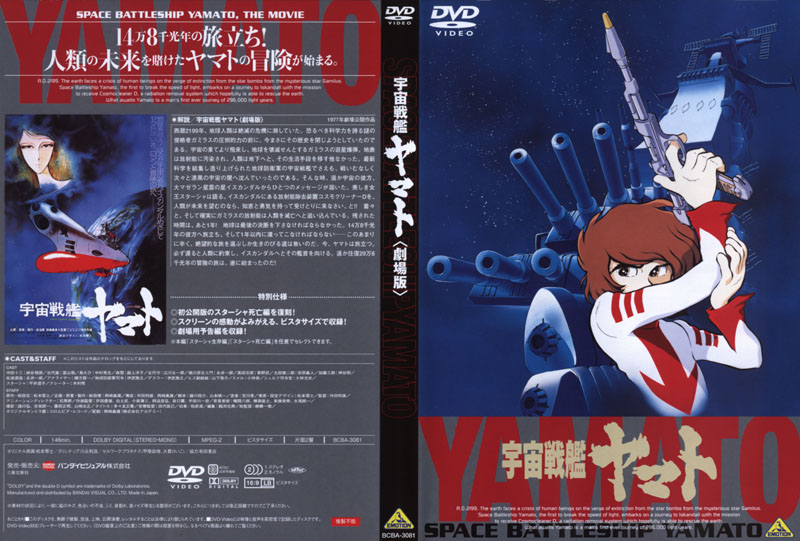 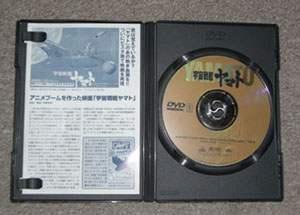 The new era of Yamato home video began here, with Space Battleship Yamato‘s first DVD release. As usual by this time, all five movies were rolled out simultaneously, each of which came with an insert featuring historical liner notes. Some interesting and heretofore unavailable options also came with the DVD format. Two different audio tracks were provided, one in the original mono and a new one in stereo with a re-engineered and slightly different score.

There was also some creative authoring that allowed viewers to pick either the “live Starsha” edition or the “ghost Starsha” edition with branching scenes at the diversion point. (Click here to read more about these.) On the downside, a decision was made to artificially letterbox the film, which blocked out part of the image at the top and bottom (frame comparison shown below). This meant that as of 1999, an unretouched original was no longer being manufactured in Japan.

The original theatrical trailer was also included as a bonus feature.

Emotion teamed up with Asian distributor PW to release all five movies in a box set. The region 3 edition of Space Battleship Yamato is highlighted above right. 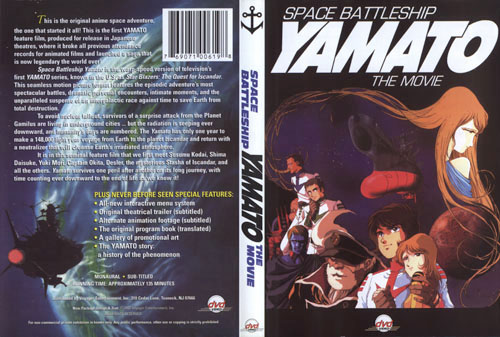 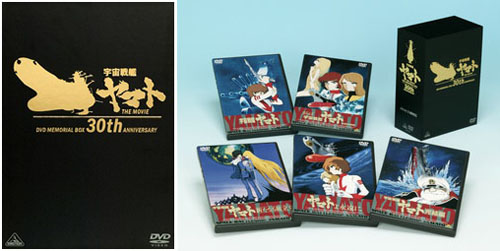 This box set reissued all five of Emotion’s movie DVDs to commemorate the Yamato movie’s 30th anniversary in August, 2007. In a very real sense, the first film had been the ignition spark for the entire engine of anime commerce that made it possible for Bandai (and many other companies) to thrive. It would have been unthinkable for a product like this not to have been made.

Below: advertising for the 2007 “Yamato Memorial Box” sighted in Akihabara, Tokyo’s “anime city.” 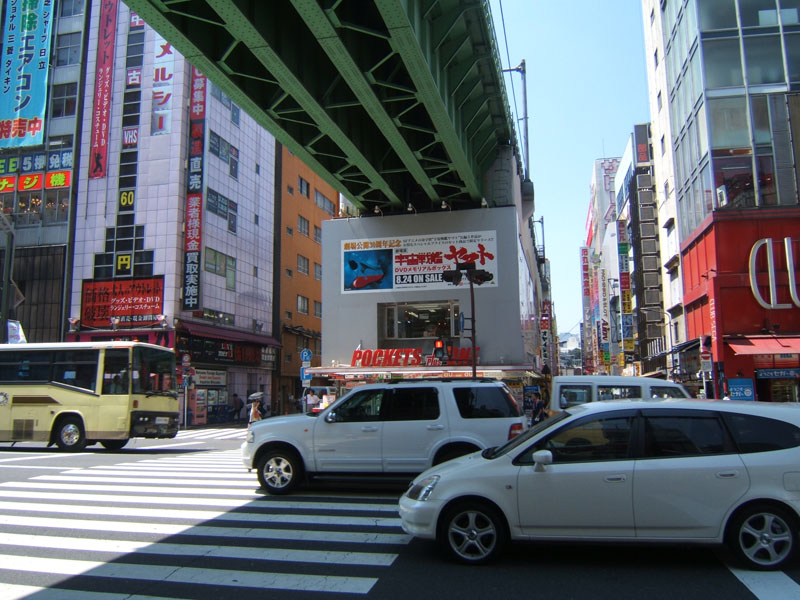 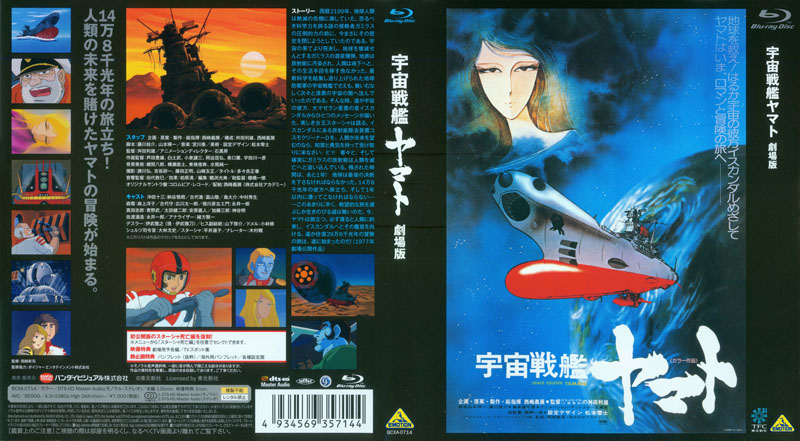 The first Yamato production to appear on Blu-ray was Resurrection in 2010, followed by the live-action movie, 2199, and Series 1. The five classic movies were the next to migrate over, coming out bimonthly from April to December. The movie never looked better, and came with a few bonus features: the alternate end footage, TV commercials, and a digital reproduction of the 1977 movie program. 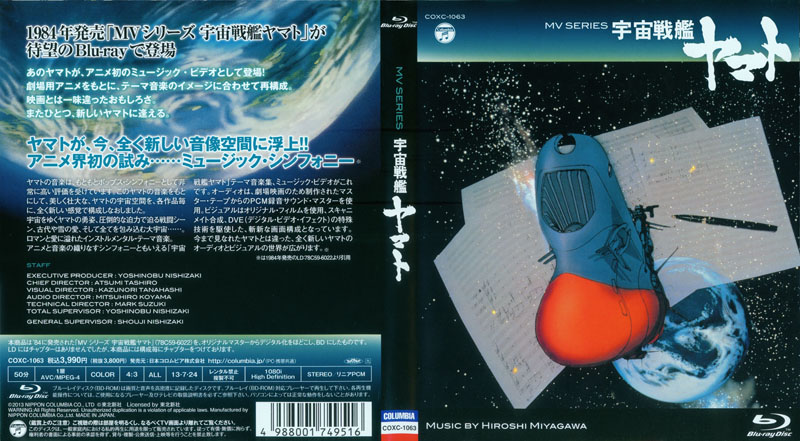 Seemingly lost in time since its first release in 1984, the MV series gots its long-awaited revival thanks to the momentum of Yamato 2199. This volume and a new one devoted to 2199 came out together in July 2013. The other volumes followed in 2014 on both Blu-ray and DVD.