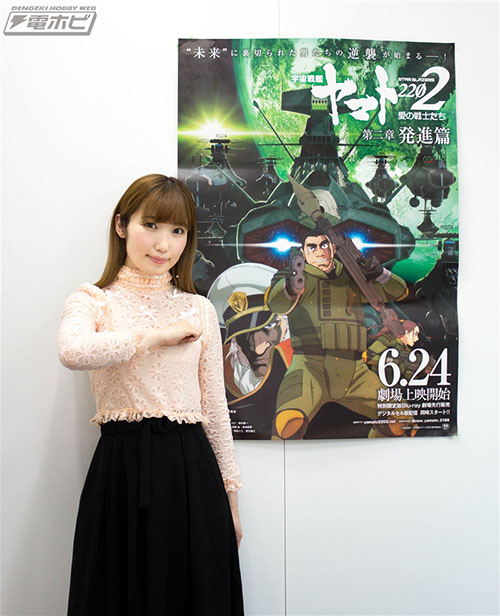 “Yamato is being made by the fans and all the staff!”

Yamato 2202 Chapter 2 will premiere on Saturday, June 24. Prior to the screening of Chatper 1, we heard the passionate thoughts of Writer Harutoshi Fukui and Director Nobuyoshi Habara. This time we focus on a voice actor who breathes life into a Yamato character. This heavy hitter is Aya Uchida, who played Yuria Misaki in Yamato 2199 and served as an anime and radio personality for events and campaigns.

Born July 23. A voice actor affiliated with Across Entertainment. She has played a number of main characters since becoming a voice actor in 2008, such as Kotoru Minami in Love Live! (2013), Arin Kannazuki in Trinity Seven (2014), and Bianca in Izetta, the Last Witch (2016) and a trio of roles in this year’s big hit Kemono Friends.

Interactions with fans at YRA Radio Yamato and events

Interviewer: You were in charge of the internet radio series YRA Radio Yamato as a personality and in the role of Yuria Misaki. Was it difficult to speak as her in front of a mic?

Uchida: The concept in Yamato 2199 was that Yuria did a radio broadcast on board the ship, so it was very easy to do because I linked it to that. I had a great time doing the regular talk part in the booth with Cho-san in the role of Analyzer. He’s good at taking the lead, so it was very helpful. The mini-drama part wasn’t done in a voice recording studio, but when we were together in the same booth, so I was able to relax a lot. The content was different from the anime, not as serious, so we did a wide range of funny things. I went to the mess hall for a meal report, and we enjoyed having stories about squabbles on the ship. Sometimes I had Makoto (Rina Sato) as a guest, and it was fun and exciting. The mail from all the listeners was really passionate and very encouraging.

Interviewer: Yuria Misaki was a new character in 2199 that didn’t appear in the original. Did you have any anxiety about playing her?

Uchida: There were very different places and changes in the concept between the original and 2199, as you said. The director and staff told us not to be too conscious of the original, but there was always pressure because it’s a work with so many fans.

In the early days I was worried about anxious mail that said, “What will happen to our Yamato?” and since Yuria was a new character in 2199 who didn’t appear in the original, I was really worried about “will the older fans accept this?” The original Space Battleship Yamato was a very passionate male drama, but then new crew members appeared with today’s “twin tail” and “idiot hair.” I was worried about people saying, “Is our Yamato all right? This is an important memory of my youth…” But all the fans embraced the new characters who appeared in 2199 as the theatrical screenings came and went, and when I realized that I’d been welcomed as a member of Yamato, I was glad.

As I mentioned earlier, many staff members were Yamato fans, so I knew the changes would be good ones that older fans would accept, so my worries faded away. Instead, their voices loudly approved, saying “Oh, it’s been arranged this way!” Things like having three work shifts on Yamato and the fact that there was a public bath on board because it was understood that there are female characters in 2199 including Yuria, so I think it was communicated that there was a meaning behind the appearance of new characters.

Interviewer: You also participated in many events and campaigns that were held nationwide. What was it like to meet the fans directly?

Uchida: There are many fans who come every time no matter where events are held in Japan, and I was able to talk with them and make friends. I enjoyed being able to meet people every time who sent mail to the radio show. Until then, I only knew them by their radio name, but at the events they’d say, “I am XX” and I’d say, “Oh, you are XX!” It was always a surprise and a delight doing radio because the fan layer is very wide. From those who say, “I’ve loved Yamato for a long time” to junior high students who say, “I didn’t know Yamato at all at first, but I loved it while I was watching it.” It was great to participate in events and campaigns and realize that it was loved by all age groups.

Some fans would send mail to the radio show saying, “My wife yells at me when I go to the theatrical screenings every time.” Mr. Cho said, “I want to tell Fighting Mama that Salaryman Papa is not Garmillas.” After that he came to an event and we met for the first time. “That mail was from you!” It was thanks to the radio show that it felt like a reunion. 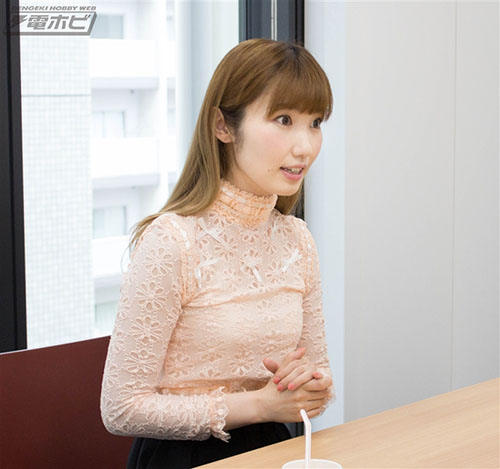 The voyage that grew up with the fans

Interviewer: Was there any way talking with fans influenced your performance?

Uchida: Very much so. In order to better understand my performance in 2199, I asked fans to tell me about the original Yamato and that raised my knowledge. Toward the end, I was able to talk about differences between the two. (Laughs) “That part changed in 2199, and that character was manlier in the original, and so on.” (Laughs) I had regular girl talk with the female fans, like, “Who do you like among the male characters?” I think the interchange with such fans and my experience on YRA Radio Yamato had a good influence on performing the main story.

Interviewer: Are there differences between Yamato fans and fans of other works?

Uchida: When I’m among Yamato fans at an event, I feel a great sense of security. I had the feeling of being a Yamato beginner at the start. Many Yamato fans from the old days taught me a lot and sometimes encouraged me, so I felt that they were very reliable. The fan layer is really wide with men and women alike, and I thinks it’s wonderful that one characteristic is that the topic of Yamato can be shared by my parents and people of my generation.

In the case of other works, we’re conscious that “we must entertain the customers” if we’re at the center of it, and there’s the strong sense that the fans and the staff alike are making Yamato. Many of the staff members are people who originally watched Yamato and liked it. There are some who say Yamato was the reason they started working in animation. And as for fans who participate in events, many of them consider Yamato their basis for living. (Laughs) Everyone has their own Yamato love, and there’s the sense that Yamato belongs to everyone, beyond the idea of sender and receiver.

Interviewer: You mentioned male characters earlier. Which one do you personally like, not as Yuria Misaki?

Uchida: I like Shinya Ito, but the director and staff always say, “You have bad taste in men!” (Laughs) I have no idea what he’s thinking based on his expressions. “This is definitely a man of the spear…” and his presence is irresistible, isn’t it? (Laughs) As the story progresses, his true and original purpose emerges, and he has his own sense of justice. Even if he’s ruthless, I interpret it in a good way. “This is Mr. Ito’s own decision, basing his reasoning on Earth and mankind.” In the end, he falls while protecting Yuki. It was like, “Look, he’s a good person just like I thought!” Originally it seemed like I liked bad people too much. (Laughs)

Interviewer: Now I’d like to ask you about Yamato 2202. What did you think when you heard that a sequel would go into production?

Uchida: When I first heard about it I got a bit restless. “Does Yuria get a turn? Will she do radio broadcasts on the ship again?” (Laughs) But above all, there was the joy of watching Yamato with the fans on the radio and at events.

Interviewer: Three years have passed since the end of Yamato 2199. What do you think Yuria was doing during that time?

Uchida: I was looking forward to finding out. As Yuria, I particularly looked forward to seeing how everyone who traveled to Iscandar was doing, especially Makoto. Makoto and Yuria were good friends who shared a cabin on Yamato, so I was very interested. I wondered if she was happy with her husband and newborn child, and I was obsessed. Did the child grow up? Is it a boy or a girl? I wondered if I would meet a child who was growing up well and have a conversation like, “Aunt Yuria, I got bigger.” And would Yuria want to become a mom, too? That’s what I imagined. 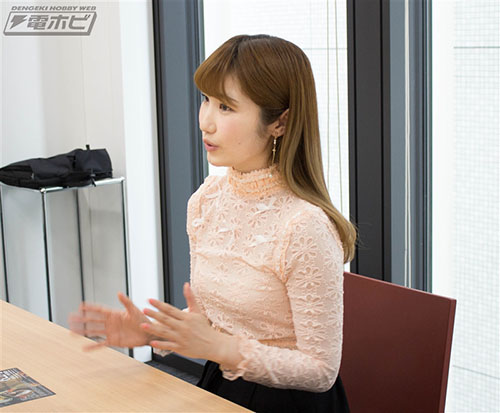 Interviewer: What about the other new characters, like Klaus Keyman?

Uchida: It was like that too with Keyman, the new character, but what I felt most of all when I saw the screening of Chapter 2 was that, while he didn’t appear in Yamato 2199, Earth and Garmillas both have their own positions and viewpoints and all sorts of time had passed.

Even with Hajime Saito and Shiori Nagakura depicted on the poster, you can catch a glimpse of small scenes and lines that tell you what life has been like since the war with Garmillas ended. I thought it was great. It’s the same with Yuria. It’s been three years since I came back to Earth, and I think you can feel how I spent my time when you watch it. Of course, you all know Yuria, and in many ways she’s the same as before. (Laughs) There’s a scene where you see something and say, “Oh? She’s a little more reliable now?” so I’d like you to pay attention to that. And after watching it, I hope we can have some passionate Yamatalks with fans. (Laughs)

Interviewer: Please tell me about products. Including your other works, what’s your impression of a character you’ve played that becomes a 3D thing, such as a figure?

Uchida: At first, since the work is named Space Battleship Yamato I thought 3D versions of characters would be released. The Yamato Girls Collection lineup has a considerable number and is quite gorgeous. Every character is done in 3D with facial expressions or poses that aren’t seen in the story, and I think that’s their charm. The Yamato Girls are characters engaged in the tough journey to Iscandar in that closed environment, so it’s rare to see their everyday gestures and gentle expressions. When you look at the figure of Yuria, I feel an expression of love that doesn’t usually appear. More than figures in other productions, for some reason I especially feel that way for the girls of Yamato. You could say that makes me feel relieved, or perhaps that I’m glad we were able to make them look so sweet.

Interviewer: Finally, a message to the fans, please.

Uchida: Since 2202 has many new battleships for both Earth and Gatlantis, look forward to them and ask, “Which one to buy? Which one should I build?” Also, it only appears for a moment in Chapter 2, but Yuria appears in a slightly different costume. I think a new figure of Yuria should be released, and I want everybody to pick one up. More than anything, enjoy 2202. I’m looking forward to seeing you and having fun talking with you at events.