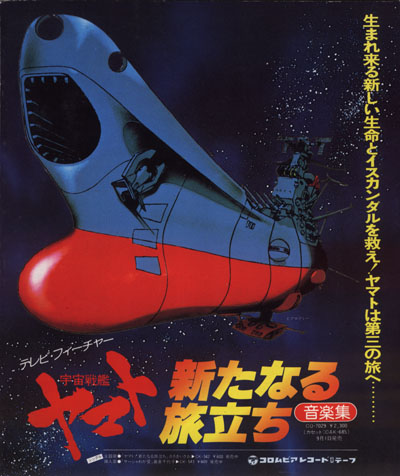 By the time The New Voyage went into production, Yamato music had become a national and cultural phenomenon in Japan. A saturation campaign of airplay, concerts, singles, and LPs had built a popularity that rivaled the anime itself. Maestro Hiroshi Miyagawa, the man most directly responsible, was now as integral to the continuing Yamato saga as its fictional characters, and another dimension was added to his work in 1979.

Two TV series and two movies had already cemented certain musical themes into the Yamato lexicon. Therefore, some of it demanded a place in the score for The New Voyage. This helped to bridge the worlds of the ‘old’ and ‘new’ Yamato. Even at this level, everyone felt it was important to recognize that fans who had watched from the beginning might be uncomfortable with a style change. Thus the ‘leitmotif’ approach was called for, combining signature themes with all-new ones. This fertile soundbed became the driving force for Yamato (the ship) as well as Yamato (the story), to launch on its new voyage.

Breaking a rule that had been made back in 1974, a synthesizer was used for the theme of the Dark Nebula Empire, and also supplied some of the sound effects for the giant mechanical planet Goruba. The performer was Hideki Matsutake, then the virtuoso of synthesizer music in Japan. He participated in Yellow Magic Orchestra (YMO) as a sound programmer from 1978 to 1982. He organized his own group called Logic System in 1981, and went on to produce several albums with them. He had already scored his Yamato credentials when he co-produced a 1978 album of synthesizer music called Space Fantasy, half of which consisted of Yamato tracks.

The piece that expresses Dessler’s feelings for Starsha featured a solo by guitarist Yoshio Kimura, and became the emotional center of the entire score. In addition, one of Japan’s best-known Enka (folk ballad) singers, Chiyoko Shimakura, was brought in to perform the ending theme, Sasha My Love, which crossed over into a wholly different genre. Last but not least, the rousing main theme Yamato!! The New Voyage was rendered by the ever-reliable Isao Sasaki and became a fan favorite.

Yamato!! The New Voyage b/w
Starsha, Thoughts Among the Stars

This is the song that accompanies the launch of Yamato in The New Voyage, strongly echoing the spirit of the original theme. It was also the first Yamato song to include an English phrase, which had recently become a trend in other anime tunes. The phrase ‘Remember Yamato’ also recognized that the series had begun to build its own legacy.

Starsha, Thoughts Among the Stars was a single that had previously been released in connection with the first feature film. Read about it here.

The Earth gradually forgets its fight
It was wrapped in shining green
Fear and grief have left her heart
Only a simple song is played
Stop, time, while we have peace
This is the age of our dreams

A red star passes through the galaxy
When its eclipse comes again
With new faces and new resolve
Yamato begins a new voyage
The ship of Earth drifts out to space
When the storm comes, remember her
Prayers and songs that flowed outward
Return now to revive her heart
When time brings back sadness and grief
She will go far, and ever on 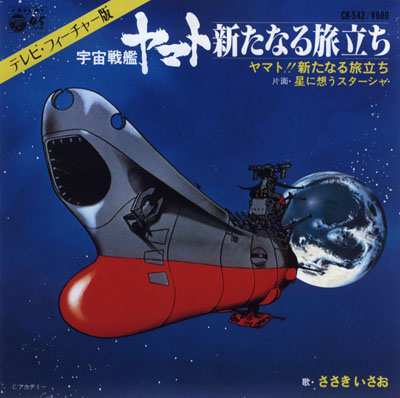 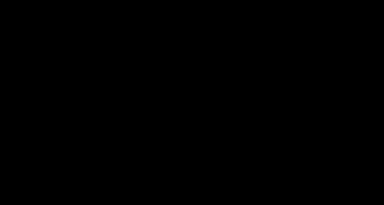 This song can be found on the following albums
(see other discographies for data): 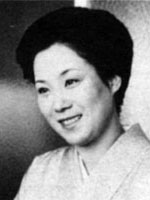 This is the song heard at the end of the film, meant to represent the thoughts of Starsha toward her beloved daughter. The B-side is a track lifted from Symphonic Suite Yamato that was originally titled simply Starsha.

You look at me with your innocent smile
My heart becomes quiet
In your heart is a flower
Planted by my teardrop
In time, it came to bloom
To become my tender daughter
Who knows with joy that she is loved
Knows from my heartbeat that she is loved
Sasha
You are my happiness

Peace will flow forever
For this I pray
My lips open, full of love
Dreams overflow from my eyes
A season of green that blooms in full
To become my tender daughter
Who knows with joy that she is loved
Knows from my heartbeat that she is loved
Sasha
You are my happiness 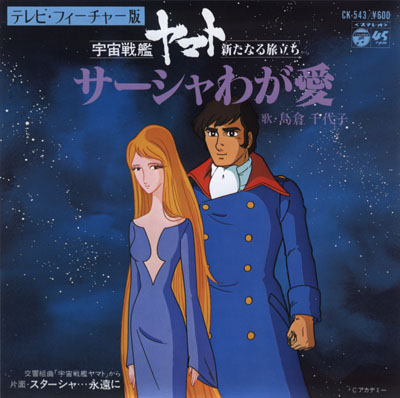 This song can be found on the following albums:

(see pictures above and other discographies for data) 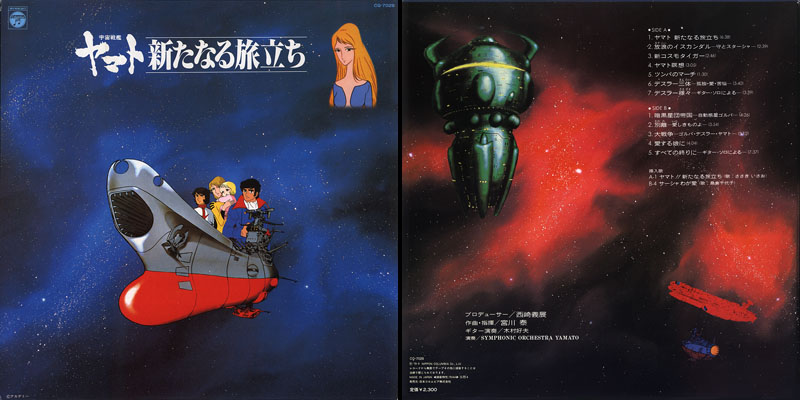 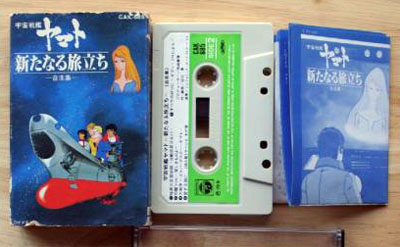 Maintaining the tradition of the first two symphonic albums, this one was substantially rearranged from the film score, which would go unreleased for another 16 years. It also incorporated vocals from both of the songs described above.

This album was released twice on CD. First in 1995 (below left/Nippon Columbia, COCC-12229) and again as part of the 2004 Eternal Edition Premium set (below right/Columbia Music Entertainment, COCX-33021). Read all about the set here. 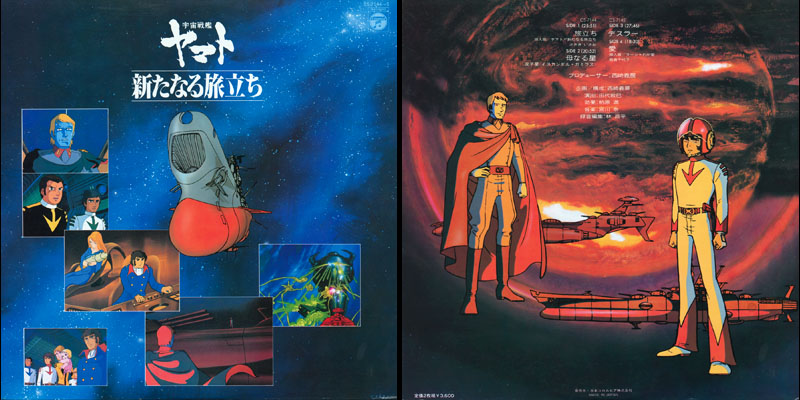 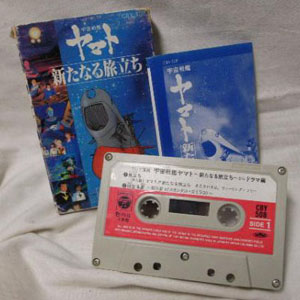 Accompanied by a 13-page storybook, this double album captured the entire movie in audio form. At the time, it was the only source for the pure BGM tracks. It was a real find for true completists since a few alternate takes were used in this version, and some tracks were replaced entirely.

The album was released as a double-CD set along with its counterparts in 1995 (Nippon Columbia, COCC-12871) 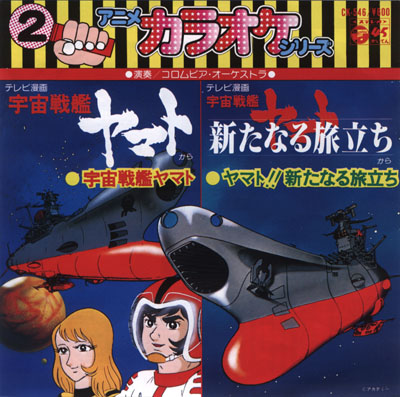 The growing popularity of karaoke and the profusion of impossibly catchy anime themes collided at full force in the late 1970s, giving another lease on life to songs that had already been sold in other forms. This single brought the two catchiest Yamato tunes together for the first time. With Isao Sasaki’s voice removed, fans now had their own opportunity to be backed up by the Royal Knights (on side A) and the Feeling Free Chorus (on side B).

This single was the second in a series of five, all of which were also available on an LP titled TV Manga Karaoke Big Complete Collection (Nippon Columbia, CB-7060~3). It was one of the last times the term “TV Manga” had been used in general commerce, since it was systematically being replaced by the word “anime” and would disappear altogether in another year or two. Not surprisingly, the smash success of Yamato was the catalyst in making that happen.

Several Yamato cassettes appeared during the production years without a Columbia label on them, which contained cover versions of various songs. Some were unauthorized, but these two from Camel Records didn’t fall into that category, as indicated by the JASRAC stickers (Japanese Society for Rights of Authors, Composers and Publishers). This is actually the same cassette released with two different titles: Immortality of Space Battleship Yamato (1979) and Yamato Be Forever (1980). The cassette’s 16 tracks went from Series 1 through The New Voyage, all performed by the “Camel Studio Orchestra.” As of this writing, a vinyl LP edition has yet to surface from the mists of ancient history. 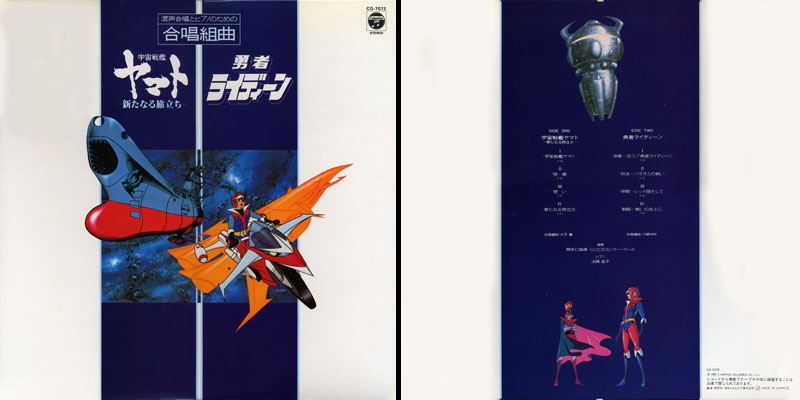 This was actually the second album of its kind, the first being an all-Yamato choral and piano album arranged by the same man, Jo Hisaishi, in 1979. (Learn about that album here.) It kicked off a concept-album rush that made 1982 a fascinating year for Yamato music. Brave Raideen was a “Super Robot” anime series from 1974. Its music was arranged by composer Shoetsu Kawasaki to fill side B. Both sides were performed by the Kanma Corps Chorus with accompaniment from pianist Akiko Shima. The entire Yamato side was included as bonus tracks on the 2000 Eternal Edition CD devoted to The New Voyage.

From the liner notes:

The new world of the Choral Suite

The Karaoke boom is a recent example of the joy of singing, which grew over generations to occupy an important place in our lives. There is a lot of nuance in the word ‘chorus,’ covering all the spaces between seriousness and joyful relaxation. But too often it is thought of only as a channel for classical music. And certainly, I cannot praise Beethoven’s 9th Symphony Chorus highly enough. But the subtle nuance of this word also takes into account a wider repertory. In other words, ‘Chorus’ is a term for study and style. As with a symphony orchestra, the members of a chorus must have a sensitivity and love for the music they are performing, or the results will be bland.

Modern music crosses all types of media with great diversification as the natural result. Wherever I go, I will hear Beethoven and the latest pop singer alike. The world of anime brings unique pleasure to elementary and junior high students. These anime themes bring a new charm to the chorus. I’m sure you will find great affection for them, and want to sing them yourself. We all recognize that as the first step toward joining a chorus. After a while, the world of anime will combine with choral suites to become a major force.

Yamato and Raideen are world favorites, and can now be heard in an unprecedented form, an important opportunity for everyone to experience the joy and fun of a chorus. A love for anime gives everyone a hot-blooded life, and singing together in a chorus could create a new era of empathy. It would be a wonderful gift to today’s children. The world of anime expressed as a choral suite will bring you great listening enjoyment and a flavor you can’t find elsewhere.

The pure soundtrack of the film was finally released 16 years after the film itself in the mid-90s revival that finally brought Columbia’s entire catalog to CD and augmented it with new albums like this one. 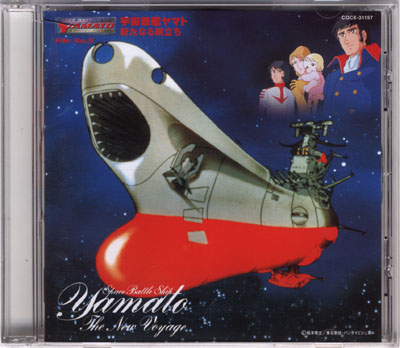 In 2000, a New Voyage music collection was released as part of the Eternal Edition CD series. This disc faithfully reproduced all the music used in the film, including pre-existing cues. The entire Yamato side of the New Voyage/Brave Raideen choral album was added as a set of bonus tracks. This disc was packaged along with Eternal Edition File No. 6, which featured the soundtrack to Be Forever.

Read all about the Eternal Edition series here. 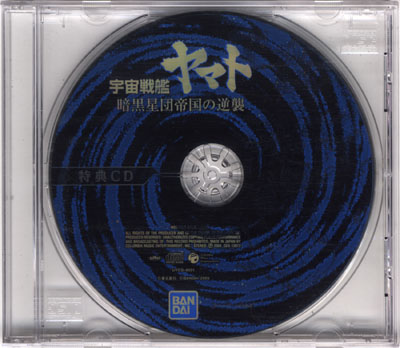 The most recent take on The New Voyage was a substantially-altered version of the story created for the Playstation 2 console, supervised by Leiji Matsumoto for Bandai and released on the 30th anniversary of the original TV series. A deluxe box-set version of the game included a mini-artbook and this soundtrack CD, half of which consists of midi-style synthesizer versions of original BGM. The other half is all-new music written for the game, which sounds utterly unlike a Miyagawa score. It is also one of the few CD sources for the “TV size” version of the Yamato Theme as originally heard in the broadcast of series 1.

A total of six games was released across Playstation 1 and 2, but this is so far the only available disc of its kind.

This is the most recent reissue of the symphonic album, which contains several karaoke versions of Yamato songs as bonus tracks.

This reissue of the BGM comes with a generous selection of bonus tracks from other productions, including the Yamato II compilation film. There are also a few variants in main portion, so even if you already have a New Voyage BGM disc, you don’t have everything.

Continue to the Be Forever Yamato Discography

One thought on “The New Voyage Discography”