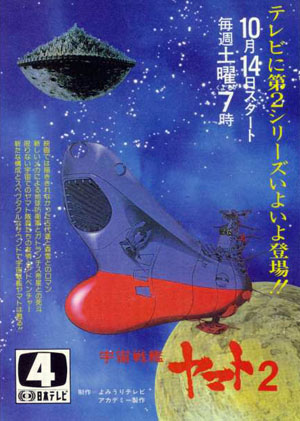 One of the things that made Star Blazers a different viewing experience than Space Battleship Yamato was the order in which Americans got to see it. In Japan, Yamato 2 (which was later to become the so-called “second season” of Star Blazers) premiered on TV in October 1978, just a week before Farewell to Yamato ended its first theatrical run. It’s difficult to explain just what a major hit that movie was and how thoroughly it impressed itself into its audience. That popularity cast a long shadow, out of which Yamato 2 emerged.

Make no mistake, the ratings for Yamato 2 were extraordinary (especially compared to the dismal showing of Series 1 four years earlier) but to Japanese fans it was still seen as a revised version of a movie that had blown their heads off. To American fans, on the other hand, The Comet Empire series was half of the entire experience. For many, it would be years before they got to see where it came from, and THAT became the revised version of a story that had blown our heads off.

This contrast helps to explain why, of all the different Yamato productions, Yamato 2 got the smallest amount of merchandising. Of course, Farewell products essentially became Yamato 2 products as time went on, but when we tally up all the books, toys, apparel, novels, manga, etc., those with a Yamato 2 name on them fill the shortest list. The same is true of music, as seen below.

It’s even difficult to locate commentaries and liner notes that are specific to this series. In the Yamato 2 Roman Album, for example, Hiroshi Miyagawa’s commentary was a look back at what had come before rather than a fresh look at the latest work. That being said, his tone was markedly different from the usual cheerleading. A bit more downbeat this time, they put a slightly different spin on the ongoing story. So without further ado… 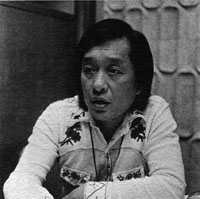 First, a men’s chorus of 20 for accompaniment. Second, a solo by Isao Sasaki.

I work with both of them in the studio well past midnight, all the way to 5am. Everyone’s exhausted and Mr. Sasaki’s voice is getting gravelly. We record it over and over, calm down (if possible) and listen back. Will it be good enough? It is, especially the tenor.

It’s another hit for Isao Sasaki, the singer of anime themes.

Kazuko Kawashima also helped Yamato tremendously and made a lasting name for herself. Her calm, clear voice was a perfect match for the magnificence and vastness of outer space. Of all my Yamato compositions, the ‘space theme’ is the one closest to my heart, and the only one Mr. Nishizaki cannot lay claim to. 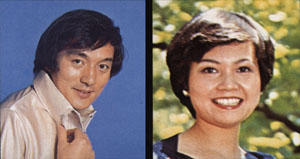 The music for Captain Okita’s death was written by my subcontractor, Hiroshi Takami. Mr. Nishizaki was quite pleased, saying “Miyagawa, this melody is wonderful.” It was used in other scenes and I had to say, “well, to tell the truth, that’s not my tune.” That was hard to admit, and it was troubling.

It appears on the B-side of Symphonic Suite Yamato in a track called ‘Recollection.’ It starts as a virtuoso guitar solo by Yoshio Kimura. Each musician interprets the music a little differently, creating a few entanglements and Mr. Nishizaki gets involved, suggesting he position his fingers differently and slides the quarter note this way… (He and Mr. Kimura aren’t acquainted with each other, so it’s pretty dramatic.)

When two experts clash, it can be terrifying. Mr. Kimura takes a bathroom break and we wonder how angry he is. Maybe we should up his salary. But he comes back and everything’s OK! “Thank you, Mr. Nishizaki,” he says. There’s no bloodshed and we breath a sigh of relief. 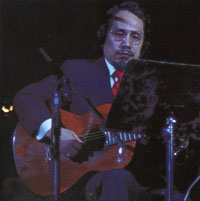 This unbeatable combination of Nishizaki and Kimura will subsequently brighten the music for Farewell to Yamato and everyone lives happily ever after.

At the very end of Farewell, there’s a few seconds of silence and then a stirring song called ‘From Yamato With Love’ sung by Kenji Sawada. I competed with his composer, Yasuo Ono, to write that song, and Ono’s version was picked. I had submitted four tunes, all of which were good. All useless. That was painful.

“All Yamato music is Miyagawa music,” Mr. Nishizaki sometimes says in passing, but it doesn’t apply this time and I feel helpless. I can’t make that claim because of this one song, and it’s a great hit for Sawada.

Eventually we’ll make ‘Yamato part 3.’ Already, I feel empty, like all my melodies have been exhausted. Someone please replace me! But I’m strong willed. I can do it all by myself. It’s expected of me. 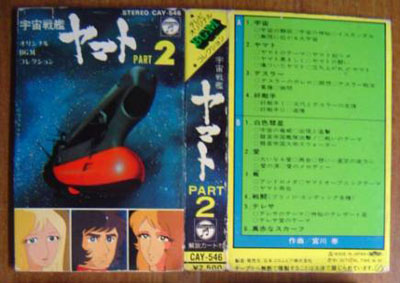 Nine months after fans’ demands were finally met with the Series 1 BGM collection, Nippon Columbia answered their calls for more of the same. Though Yamato 2 inherited a large volume of music from the first series and the Farewell soundtrack, many new tracks were recorded (again, monaurally) that eventually found a home here. Also like the previous album, the performance was credited to the Yamato Studio Orchestra, rather than Symphonic Orchestra Yamato. Again, since television music was generally more minimalist than a film score, it’s probable that not all the musicians were needed to record it—hence the name change.

Miyagawa’s liner notes from this album:

There was always a consistent melodic element in the Yamato music that is certainly heartfelt. Of all of the tracks, the one that I felt was most difficult was the theme for Dessler. His thematic essence doesn’t come from being an invader who loves war, but rather his own lifestyle, sense of justice, his coldness and darkness, his extremes and his destined sadness. His music needed to be romantic as well as memorable. But it wasn’t too difficult to give the music a sense of strangeness, too. When I moved to the piano, my fingers naturally began playing the tunes. I believe it’s a masterpiece, but I wonder what everybody else thinks?

The most difficult piece was for the White Comet. It had to be big, and it needed to sound like nothing before—with vast scale and grandeur—so we used a pipe organ. I recall spending two days with the organist on that piece. When the White Comet approaches, we wanted people to shudder at its strength and grandeur.

Yamato paved the way for animated scores to become hits on the music charts. In the future, there will no doubt be others that follow in Yamato‘s footsteps. From the first series on, they all had a common image with various characters colored by their own musical themes. This is what brought everything together.

The drama collection for Series 1 had been a deluxe affair, a 13-album box set that put every minute of the 26-episode story at a listener’s fingertips. The fact that this format was not repeated may say something about the limits of even the most dedicated fan’s bank account.

What made this album feasible was the assembly of a compilation movie that had trimmed 26 episodes down to 96 minutes. It was first broadcast as a TV special a year after Yamato 2 first aired, and later released to home video. Its length was ideal for a double album, which made it a no-brainer for Nippon Columbia. 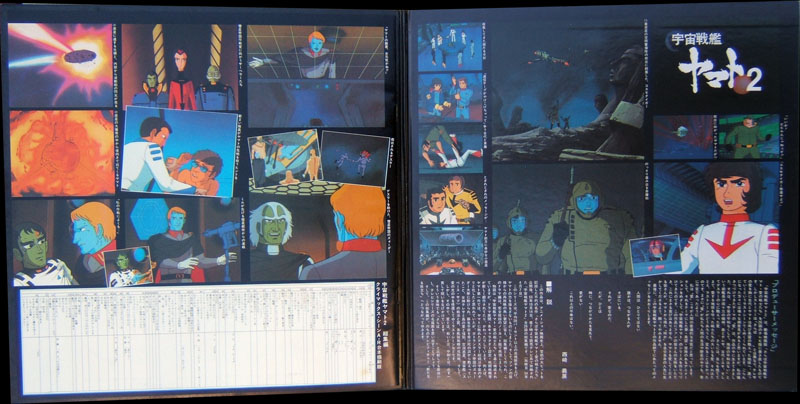 In addition to 10 pages of color stills and dialogue scripts for key scenes, the album’s sound mix included some unreleased BGM and an intriguing ‘orphan’ track that only appears in this production. Also, some of the Yamato 2 music was swapped out for tracks from The New Voyage, a shifting of context that gave them an interesting new complexion. This album was released once on CD in 1995, shown below (Nippon Columbia, COCC-13035~36) which included a miniaturized version of the internal pages.

Columbia occasionally offered promotional premiums with their Yamato LPs; this one was accompanied by a pair of glittery iron-ons shown as-is (above left) and flipped over (above right). 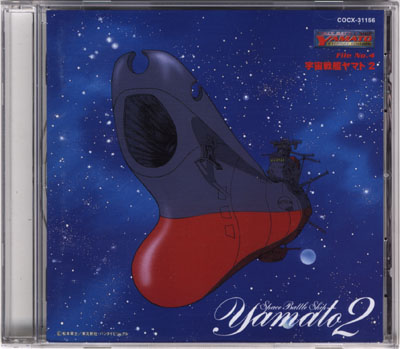 20 years after the Series 2 BGM album was released, the Eternal Edition CD series finally began to fill out some of the many unreleased tracks that had languished in the vault all that time. The Yamato 2 volume added some of this treasured music to the existing BGM for a longer listening experience.

Click here to read about the Eternal Edition series.

Since the BGM for Yamato 2 had previously been confined only to one album, the arrival of these two discs was a true milestone, a generous and immensely satisfying collection that doubled the volume and finally brought all the missing pieces out of hiding. The extensive liner notes also shed some long-awaited light on the recording process for Yamato 2, which was combined with that of Farewell to Yamato for the most prodigious output of Hiroshi Miyagawa’s lifetime.

Continue to the New Voyage Discography

Below: an ad for the Yamato 2 Drama album. 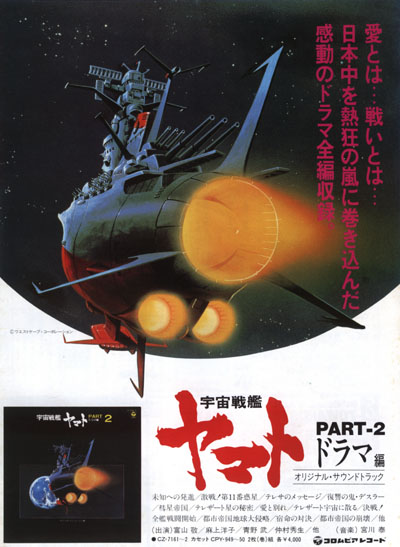