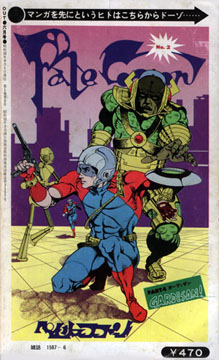 OUT Magazine and the Yamato Boom

Who was the famous magazine editor who is said to have ignited the Yamato boom? He is now known only as “Mr. K.” (This was not his actual initial; the individual in question is intensely private and once went into a blind rage when his photo was printed in an early issue.) He founded OUT magazine while employed at Minori Shobo, a newsprint wholesaler for the popular Japanese newspaper Asahi Shimbun.

During his startup months, Mr. K was slow to develop the magazine and even slower to hire staff. His only regular contributors were writer Yukio Motomura, who had come from a science-fiction club at Chuo University, and artist Itahashi Shyuhou who created a serialized American-style SF comic strip called Pale Cocoon.

It’s hard to explain what kind of magazine OUT really was. For one thing, it never quite matched the size of other magazines, and most of the early issues didn’t even match each other. Readers jokingly referred to it as ‘deform size’ until it went to a standard B5 format.

It was comparable at the time to a hobby magazine called Takarajima [Treasure Island], but OUT was too eclectic to fit into this category. A typical issue had science fiction articles right next to comics, pulp fiction, opinion essays, B-movie reviews and nonfic. The only unifying factor was that its editorial style was consistently downbeat, and each article appealed to a particular subculture that wasn’t being served by mainstream publishers.

In other words, OUT was not a particularly big seller…at first. Various issues from 1977, starting with the first

The first issue, dated May 1977 (which actually went on sale in March) opened with a cover feature on SF movie posters from the 1950s and included an extensive article on author Ray Bradbury. Though sales weren’t great, the announcement for issue 2 provided a bright spot: its cover story was to be all about Space Battleship Yamato!

Sales figures for the first issue weren’t in by the time work began on the second, so there was no reason to believe that Yamato would increase the demand. Additionally, the announcement itself didn’t reveal any particular interest in the subject. It read as follows:

Do you know the song, Scarlet Scarf? It was from the SF Roman anime Space Battleship Yamato. “Hurry, Yamato, to Iscandar!” The music would flow behind that narration and the countdown caption: “Earth has only XX days left.” Can Yamato live on forever in our hearts? Next time we will present a 50 page feature about it.

What made this announcement significant was the surprise response from readers one month later.

Long lines formed in bookshops the day OUT #2 was released in April. The editorial office was besieged with phone calls from fans who couldn’t find copies. Their friends couldn’t, either. 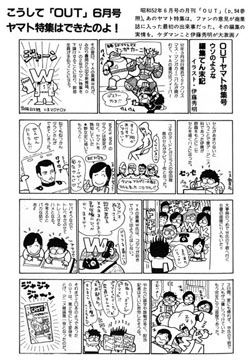 This cartoon about the making of
OUT#2 was published in the book
Anime Great Love in 1982.
Read a translation here.

It wasn’t strange for Yamato fans to be tuned in. After all, OUT openly catered to the science fiction crowd. The strange part was the staggering amount of interest over this one particular feature. It was essential to these fans that they not miss the issue.

To have such an intense reaction to a 2nd issue was unheard of, and it became the stuff of legend afterward. Even when OUT ceased publication 18 years later, its first two covers were still iconic. OUT #1 was known as the “light beams from the eyes” issue and #2 was nicknamed the “Yamato polkadot” issue.


As it turned out, the first sight of those polkadots was the happiest moment in the lives of many Yamato fans. It was also a historic moment in the annals of Otaku-dom, since the articles had come from their very own ranks.

Mr. K had made contact with the members of Yamato Association, the best-known of all the early fan clubs, and worked closely with them on this special issue. Their priceless archive of production materials acquired from the original animation studio (Office Academy) had filled many popular fanzines and club newsletters, and could now serve the same purpose in a more visible publication.

The YA members knew there was a large audience for this material, and put special effort into the new articles, cranking out 60 pages under the title ‘Yamato World.’ This treasure trove included a complete episode and character guide (with English names appearing for the first time anywhere), some parody pages, an extensive glossary titled ‘Encyclopedia Yamatonica,’ and an ultra-rare early interview with Yoshinobu Nishizaki, who at that time was hoping to hold special screenings of a Yamato movie for Japanese fans.

All of this was pure gold to starving fans, and they bought up every issue of OUT #2 as fast as it hit the newsstands.

With issue 3 the magazine was back to its previous self, and sales dropped. The remedy was obvious: get those Yamato kids back. They rushed out an appetizer for the fourth issue (August cover date) and a full-course followup for the fifth. ‘Yamato World Part 2’ picked up where the previous installment left off, this time delivering the first-ever article on TV series development, interviews with staff, and a parody manga rendered in a style loosely termed ‘Heta-Uma’ [skillfully clumsy]. But the showstopper was a second interview with Nishizaki that brought the best news anyone could ask for: the Yamato movie was to open nationwide and he was already thinking about a sequel.

As it turned out, OUT magazine had played a crucial role in bringing the Yamato phenomenon to critical mass. The smash success of the 2nd issue had demonstrated to Nishizaki that an army of fans was ready to be recruited for a grass-roots guerilla marketing campaign. They did their job so well that the Toei Cinema chain was convinced to elevate the Yamato movie out of its limited run and take it nationwide. That was the true ignition of the Yamato Boom.

Mr. K had gotten the message as well, and hired the most skilled member of Yamato Association (who went by the name of ‘Mr. W’) to create more anime content for OUT. As 1977 progressed, anime features became a regular part of the lineup, and the December issue’s cover feature on Locke The Superman left all doubt behind. Anime was the future.

Mr. K left the magazine around this time, but an influx of staff had brought with it a much-needed shot of energy. One of their first moves was to create a spinoff magazine called Rendezvous, which was entirely devoted to anime and related media. It was the first to popularize the picture-story format that would soon be mimicked by forthcoming specialty magazines.

Equally influential was the concept of anime parody manga, as represented by the Yamato strip in the fifth issue. Japanese fans already had a penchant for compressed words in the late 1970s, so ‘anime parody’ was quickly shortened to ‘aniparo.’

Farewell to Yamato hit like a tidal wave in the summer of 1978, and though OUT’s September issue devoted almost as much space to it as the famous 2nd issue, the OUT/Yamato honeymoon was over. Tokuma Shoten’s Animage magazine had made its debut, and bigger things were on the horizon.

Though it would never again experience the explosive popularity of its 2nd issue, OUT would be forever recognized as the meeting point of Yamato and the world of professional publishing, a Big Bang that created an entire new universe of possibilities.

Throughout its 18 year history, OUT consistently expanded the edges of that universe with groundbreaking ideas. The March 1980 issue was the first to depict an anime character (Sayla Mass from Mobile Suit Gundam) in a nude pinup, and it chalked up record sales. September 1981 saw an OUT specialty publication, an imaginative book called Gundam Century which was the first to expand the Gundam universe. The next milestone happened in 1984 when OUT published the Macross Perfect Memory, still considered by many to be the single best book devoted to that groundbreaking series. 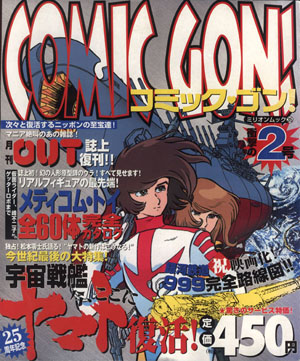 An OUT radio program called VAPOUT premiered later that year, and annual gatherings of OUT readers commenced in 1984 (They were so loyal to the magazine, they invented a special name for themselves, “Oushtians.” Like Japan’s early Christians, they “concealed their faith” from the rest of society). OUT was the first to combine the many and various robot-anime series from Nippon Sunrise into a single story called Sunrise Space History (1986) which broke ground for a highly successful line of Super Robot teamup manga and videogames in later decades. The magazine continued to be prized for ‘aniparo’ manga all the way to its final issue in May 1995, when it was replaced by the short-lived MEGU magazine.

OUT may be out for the rest of time, but its spirit lives on in everything it inspired.

Portions of this article were translated from the May 1999 issue of Comic GON Magazine. A lively blend of anime, manga, and hobby coverage, GON was a direct descendant of OUT, and the article was a loving tribute to their spiritual father. It included a faux-OUT cover image and several pages designed to mimic the style of the original Yamato issue. Click here to view the Comic GON article in full.