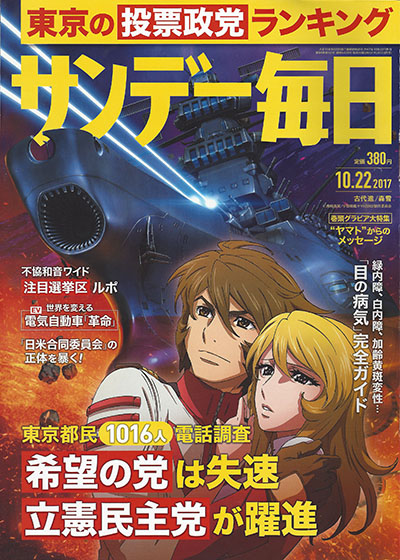 Feature: the course of “Confused Japan” ~
Message from Yamato

“Yamato cannot be
left to anyone else”

Hiroshi Miyagawa, a musician who represented the Showa era, made the timeless masterpiece Theme of Space Battleship Yamato. Now his eldest son Akira Miyagawa (56) handles the music for the new work Yamato 2202, which continues from Yamato 2199. We heard memories of his father Hiroshi and thoughts on inheriting Yamato.

At the time of the first broadcast, I was in the second year of junior high school. I heard that my father was working on an anime called Yamato, and when I saw it I was fascinated. There was a reality to it unlike previous anime. The design was finely drawn down to the details of instruments and engine nozzles. It had lines like “Output 120%!” and “Direction five degrees to port!” In the scene of Yamato taking off through the explosion of smoke, it became so quiet I thought there was a broadcast accident, but Yamato appeared little by little and the sound of the Wave Engine gradually increased. I unconsciously thought, “That’s scientifically correct” and it seemed to be properly reproduced.

My father made songs with a great deal of influence from the progressive rock that was fashionable at the time, and they flowed one after another. Even after I finished watching it, I was still trembling. I remember talking to my mother and saying “This is amazing.”

The “Miyagawa boys” participated in music production on the sequel movie, Farewell to Yamato.

I was a high school student at that time, in charge of the pipe organ. I was attracted to the Hammond organ used by Emerson, Lake and Palmer, and as I watched Yamato every week I played the music of Yamato on the home organ. Father knew that and decided to use a pipe organ for the piece in Farewell called White Comet. He decided to let me play it. However, it didn’t go OK on the recording day. In the end, I played it 36 times.

In fact, I remembered that. When the pipe organ was used for White Comet this time in 2202, I stood beside the player and gave orders at certain points. “Here it’s heavy, it stops here, take a breath and start with this tempo.” At that moment I remembered, “Ah, father did this at that time, too.” When I was a high school student he’d direct me by word and hand saying, “Akira, that’s wrong. Here we go, dan-daan-baaa and you pause a little and then it goes zuaaan…” But I couldn’t play it as expected, so I shed tears with the feeling of, “Dad, please be quiet!” (Laughs)

At that time, father was teaching me music intensely. That’s what I think now. It’s natural for a composer to explain a song, and it was the same communication between a parent and child that I have with my son. At that time, obviously, the parent and child were musical companions. Hiroshi Miyagawa was talking to me without hesitation, and I was very impressed. When I notice that, it reminds me of that ceremonial expression, “Well, that’s the way it was.” 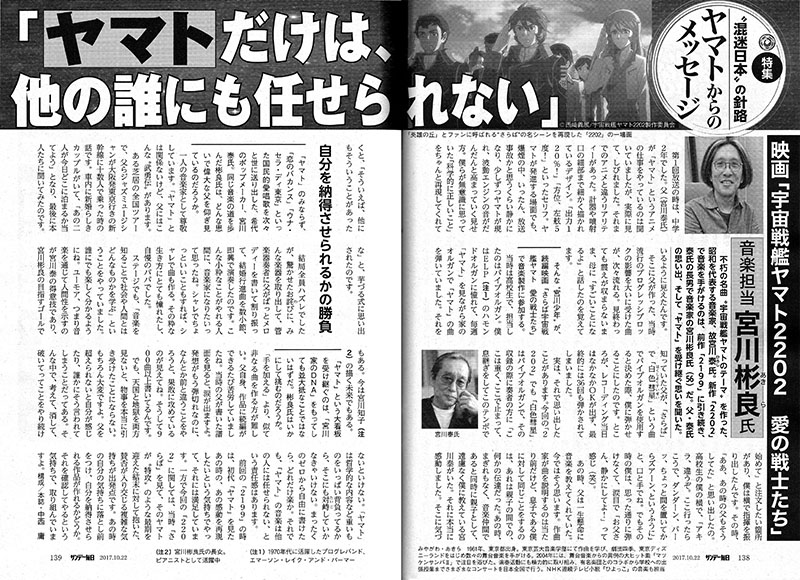 The game of convincing oneself

Hiroshi Miyagawa was a maker of pop songs who sent off one national favorite after another like Yamato as well as Vacation of Love and Una Sera de Tokyo. How does Akira, who walks the same musical path, look up to his great father?

I respect him as a musician. It has nothing to do with Yamato, but there is a “heroic tale” of my father.

It’s a story about when my father was a jazz musician for the national tour of a certain play, and he got on the bullet train for Tokyo from Osaka with dozens of other people. There was a couple in his car who appeared to be newlyweds, and the conversation turned into “Where do you suppose they’ll be staying,” and in the end he just asked them.

It was wrong to do that, but in a surprise apology my father wrote a melody for wind instruments and everyone took out their instruments and played an improvised wedding march for several measures. I wanted to be a musician who could be such a stylish person. I longed for the kind of lifestyle where I could compose music for fun and do nice things like that, and I was proud of papa. 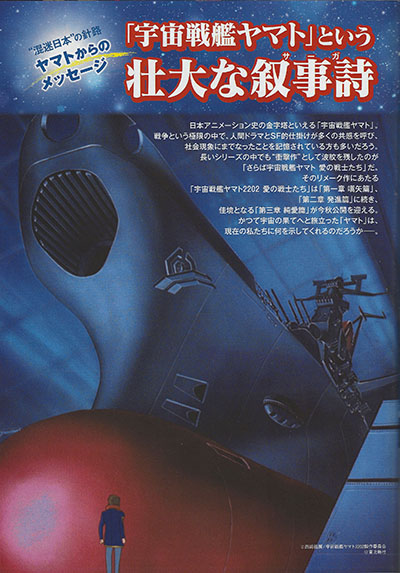 On the stage, I was “learning about society and human beings through music.” Everyone understood it happily. Hiroshi Miyagawa’s great skill was to show humanity through humor and music, and that’s the goal I’m aiming for. That’s also the future that my oldest daughter Tomoko Miyagawa is working on now as a pianist.

To inherit the big billboard of Yamato, you must have the “Miyagawa family DMA.” How does Akira meet this challenge?

When “adding a hand,” it’s more difficult to compose similar songs. My father had a hard time making sequels to his work. I cry when I look at the sheet music he wrote at the time. I see how he boldly attacked the work, somehow doing something different even after he had run out of ammunition. In that way, he wrote more than 900 pieces.

I wouldn’t really undertake something if I didn’t see both heaven and hell in it. Of course it’s difficult. No matter what others may say, I don’t feel that I can surpass my father. Under such circumstances, I have to keep thinking, erasing, breaking, and making things. Yamato carries a lot of things on its back, including philosophical content, and I also have to confront that. How much easier would it be to write freely from zero? Still, there is the sense of responsibility that the music of Yamato cannot be delegated to others.

When I watched the first Yamato at the time of 2199, I did it with the feeling that I wanted to reproduce that impression, and I’m satisfied with it. On the other hand, when I looked at Farewell with regard to 2202, I had to embrace the ending which made it feel like Yamato was glorifying “suicide,” and the mingling of complex feelings became the starting point. I invested in my feelings at that time and asked whether I could make a work that was convincing to myself. I wrestle with the feeling of confirming that. 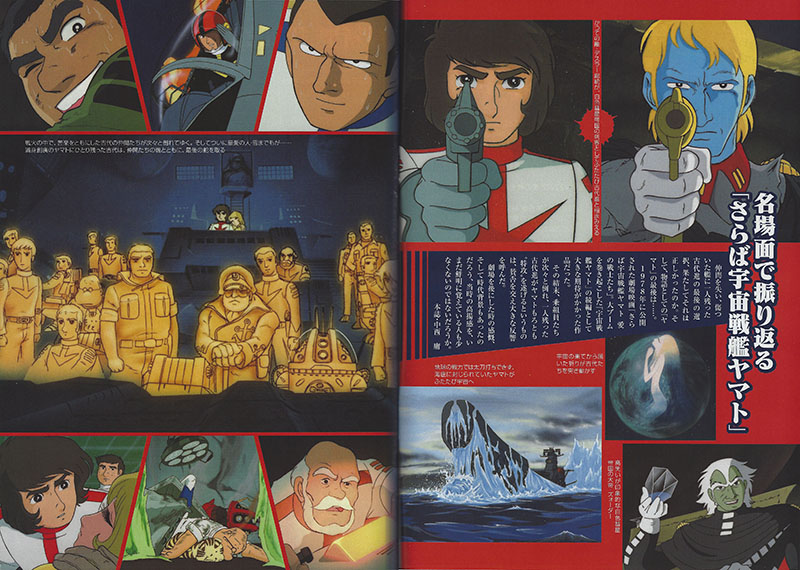 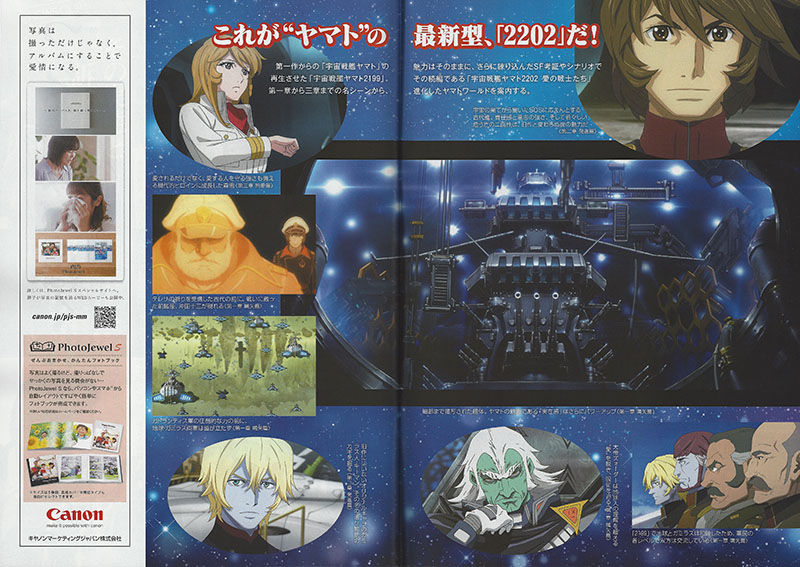