The term sounds a bit lightweight for merchandising from a hard-driving SF adventure story, so it may come as somewhat of a relief to learn that ‘Fancy Goods’ was actually inherited, not invented for Yamato. Anime and manga spinoff products first appeared in the 1960s, and by the early 70s there was a steady stream of what are now called “Character Goods.” The best American example of this could be found in the Star Wars era, when massive licensing programs put Star Wars characters and logos on any number of everyday objects.

These days, such merchandising is endemic in Japan. If you have a favorite anime series, you can populate your home or office with any number of dedicated trinkets and tchotchkes found at your local stores. Back in the 70s, the primary conduit for this stuff was mail order from girls’ magazines. Hence the term “Fancy Goods.”

Below are many of the Space Battleship Yamato products made by Yoshinobu Nishizaki’s Office Academy during the run of the first movie (1977/78). Nishizaki had spent years licensing and making “Fancy Goods” for other programs, so when it came time to do the same for his own, they were all a cut above everything else you could find. They were first available in movie theaters, then through the official fan club when it launched in 1978.

The earliest Academy-made collectible for the Yamato movie anyone could get was also the most prized of them all; the grass-roots marketing kit sent to volunteer fans from Yoshinobu Nishizaki’s Office Academy. Looking for any way possible to make the movie more visible, he turned fledgling fan clubs into promotional guerillas, arming them with a poster to hang in public spaces, instructions on how to contact newspapers and broadcasters, and an advance ticket for the movie itself. The irony of such a collectible was that putting it to use meant giving it up, which means intact copies like this one are now be extremely rare. Read more about this once-only promo campaign here. First up, a pair of aprons to prepare you for whatever dirty work lies ahead in sorting out your Yamato swag.

Two styles of pewter belt buckles. Because the last thing you need is for your pants to drop while standing in a movie line.

Multiple styles of cellophane-coated shopping bags to haul around your Yamato loot.

Yamato duffel bags in two colors, black or white. Remember, all duffels do not look alike.

Back to school or the office? Don’t forget your Yamato binder (left), file book pages (center) or the trusty Yamato clipboard (right). 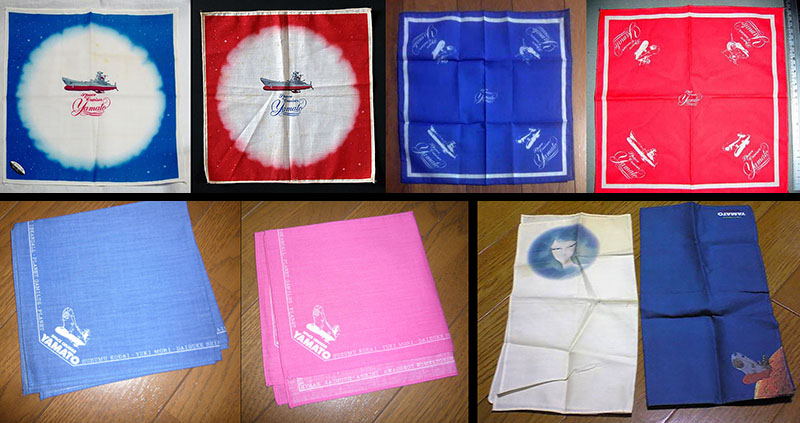 Yamato handkerchiefs were an unexpectedly popular item in movie theater gift shops, so plenty of variations were made to absorb sweat, tears, and nose-juice alike.

Another trinket unique to Japan: a pocket-sized, accordian-style memo pad with metal plates for covers at opposite ends.

These unique notepads had clear acetate pages over color covers, evocative of an animation cel.

Like the movie program book, English text was common for the first time in this generation of products, probably made with the idea that they could be sold wherever the movie was playing overseas. However, evidence for this actually happening is as yet undiscovered.

How many times have you looked at that plain old t-shirt or gym bag and thought,
“if only I had a Yamato iron-on for this, my life would be perfect?”

Iron-ons were made in several shapes and sizes, even ganged up in multiples for the less picky fans. The character art was unique to this set, and was never reprinted elsewhere.

Pencil boards (or ‘Shitajiki’ in the native language) have been common in Japan for decades, less so in other countries. Their purpose was to provide a hard surface to slip between the sheets of a notepad that didn’t come with a hard backing. This was evidently a common problem if the abundance of pencil boards is any indication. 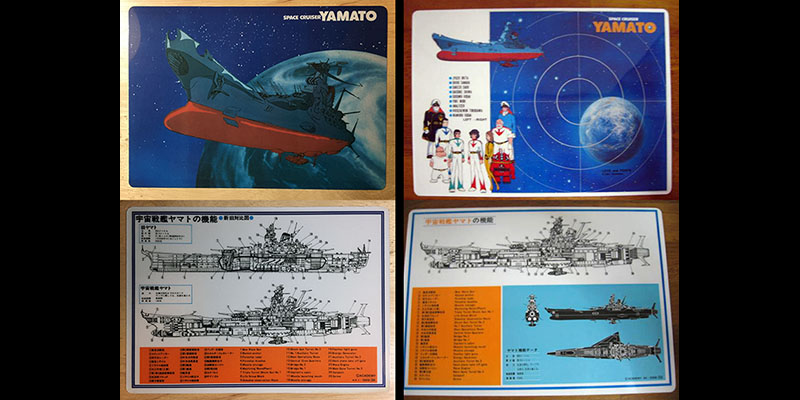 Of course, any flat surface is fair game for an image, so the Yamato pencil boards were born. Naturally, most were durable enough to survive for decades and are just as useful today as they ever were. 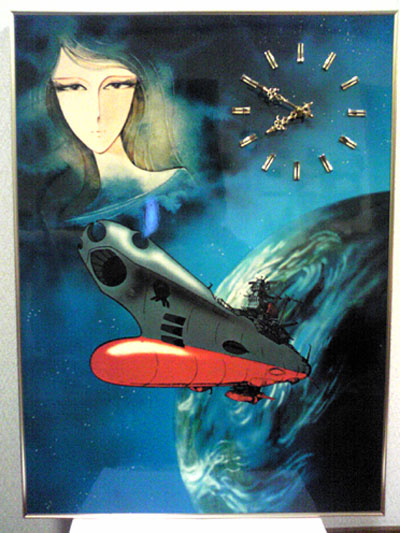 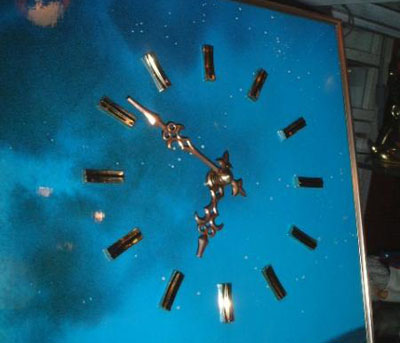 Simple, elegant, and understated, this poster-sized wall clock was perfect for telling you how long you
still had to wait for the next episode. 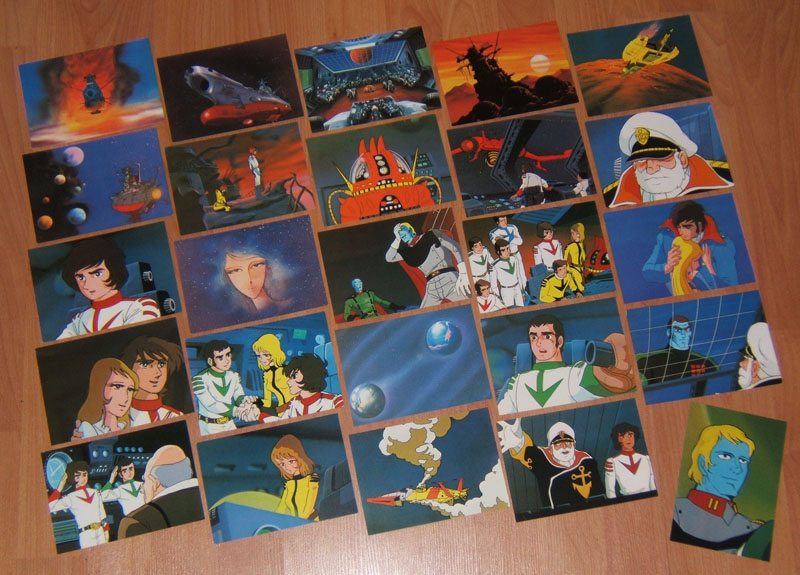 There was this set of 25 postcards that must have brightened up thousands of mailboxes. Naturally, Dessler’s card stands apart. 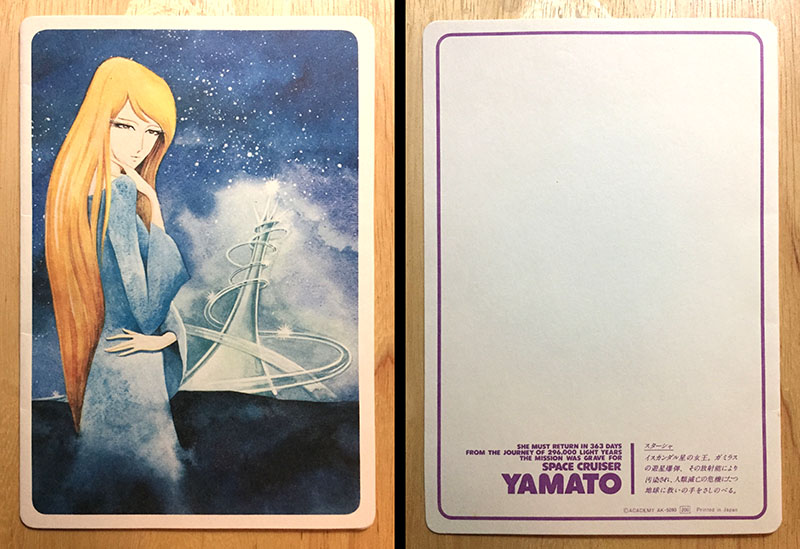 And lastly, Academy created a wide range of greeting cards (called “message cards” in Japan) in many sizes and variations. The largest and most elegant was this Starsha card with unique art that was never reprinted.

This one was the next size down, and probably tough to write legibly on if you only had ordinary ballpoint pens around.

This backdrop made things a little easier. 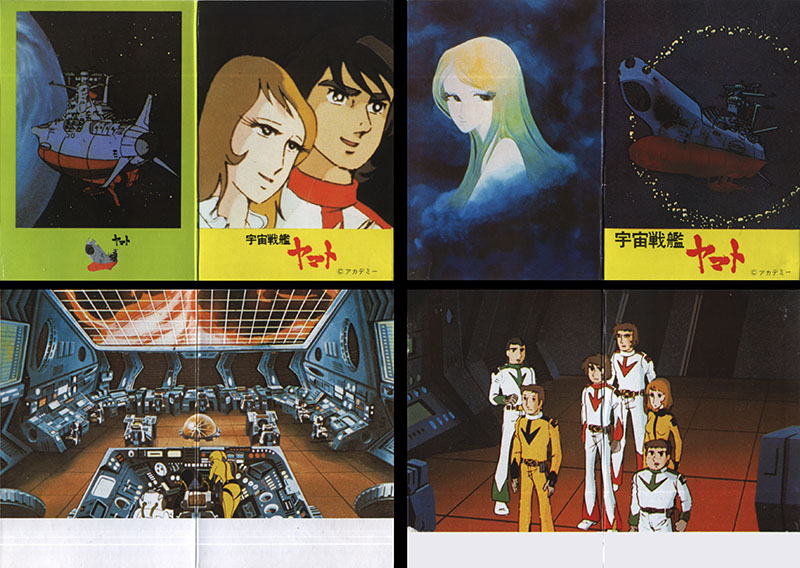 These two smaller cards were easy to write in, but didn’t leave much room for a message. 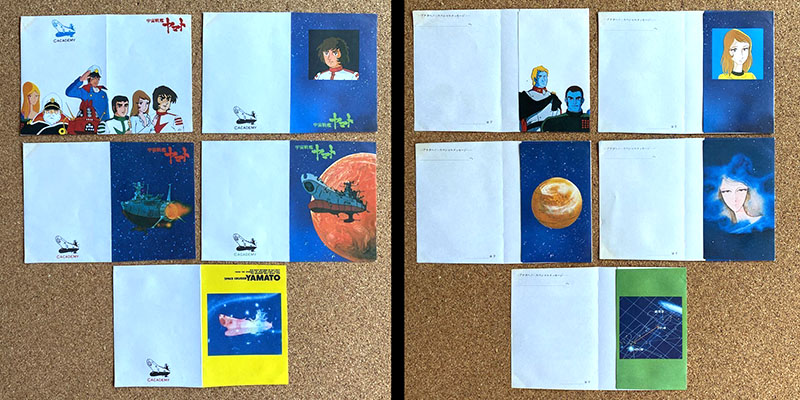 This set was made up of 3-panel cards to increase your writing room on the inside.

Next, we have a line of “story cards” that offered multiple images from the anime.

There were also three different styles of envelope to expand versatility.

And finally, the most creative versions were these two “window cards” with a transparent front peeking through to a postcard inserted inside. The unanswerable question is, how many fans could actually bring themselves to use these cards as intended? Would you?