After testing the waters with their first slate of Yamato publications, Office Academy stepped forward with a similar lineup for Farewell. Interest ran high, since fans were ravenous for anything that would preserve the moviegoing experience for them, and these books did it in style. 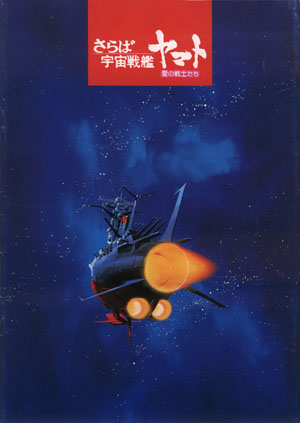 Program books like this one have been a staple of Japanese cinema for decades, and are still made today for practically every film released there. (There are enough in existence now to fill entire collector’s shops.) This one was notable for providing the first large collection of still images and a big foldout poster in the center.

Examine this book from cover to cover here.

To keep Yamato‘s visibility up and also stoke the fires for The New Voyage, Producer Yoshinobu Nishizaki engineered the 1979 Big Summer Roadshow, a triple feature that included the first Yamato movie, a revival of Farewell, and the premiere of a compilation film for Triton of the Sea (which covered the first half of the 1972 TV series).

Office Academy created a new program book for the event that combined the first two Yamato movies into one package. (The copy shown above right was probably autographed at a fan club meeting.) To examine this book from front to back, click here. 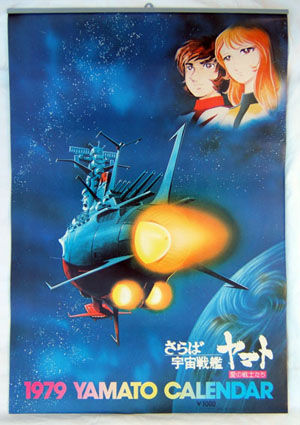 This large-format calendar scored over the previous year’s edition, loaded with stills and mecha drawings printed as big they would ever be seen. The first two pages were devoted to Space Battleship Yamato as a lead-in to the monthly calendar pages, each of which had huge mecha drawings on the opposite side.

Every fan’s house was bound to have more than one wall, so there was no reason to publish only one calendar for 1979! This one was slightly smaller than the A type (though still substantial) but was printed on heavier paper and contained just as many stills. A sample page is shown below left. Below right is an ad from the Yamato fan club magazine showing both calendars and also a C type, which can be seen here. 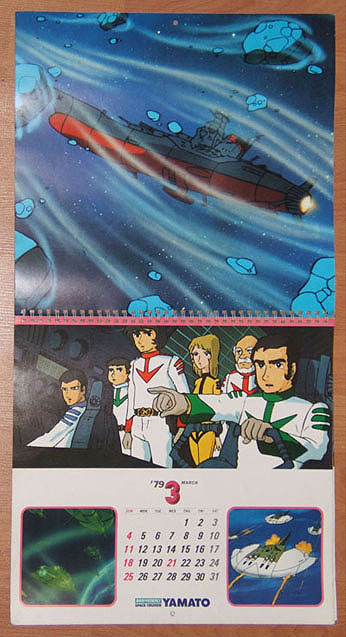 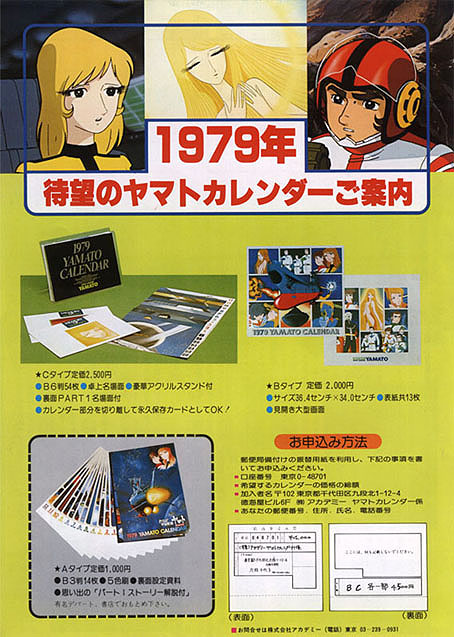 Produced as a premium item for special events (and also for mail-order through the fan club), this book followed the format established by the Space Battleship Yamato version with almost double the page count. It offered a rare opportunity to view animator’s model sheets close to the size of the original artwork.

Designed to a more modest scale than the legendary ‘Silver Set’ of the previous year, this was nevertheless the signature publication for Farewell to Yamato, offering more intricate coverage than any other (and there were many). Interestingly, it was released the same day as the lower-priced reprints of the previous hardcovers. It also came with a slipcase (shown above center) and a built-in bookmark thread. The internal pages began with a very detailed production calendar and progressed as follows: 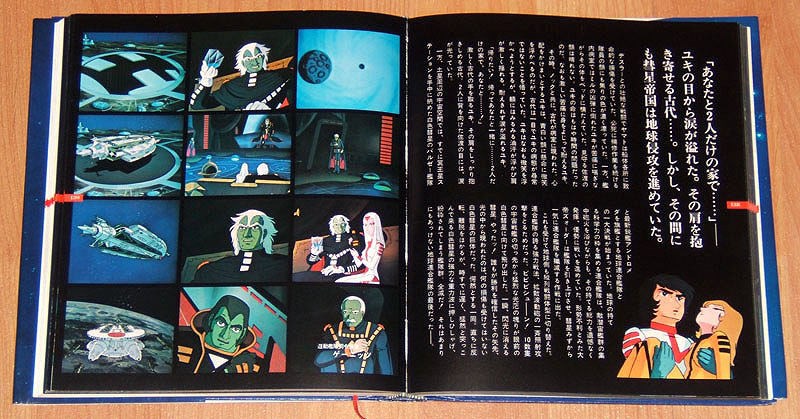 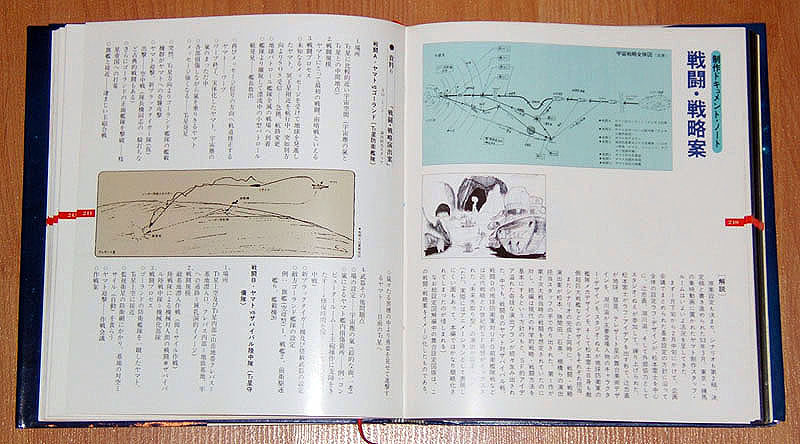 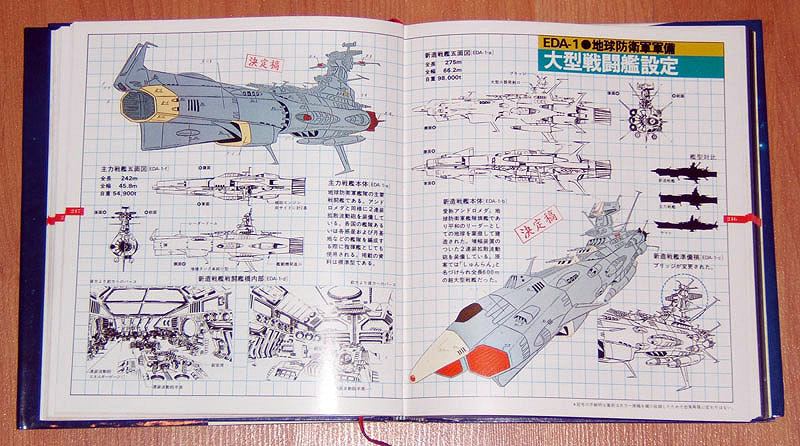 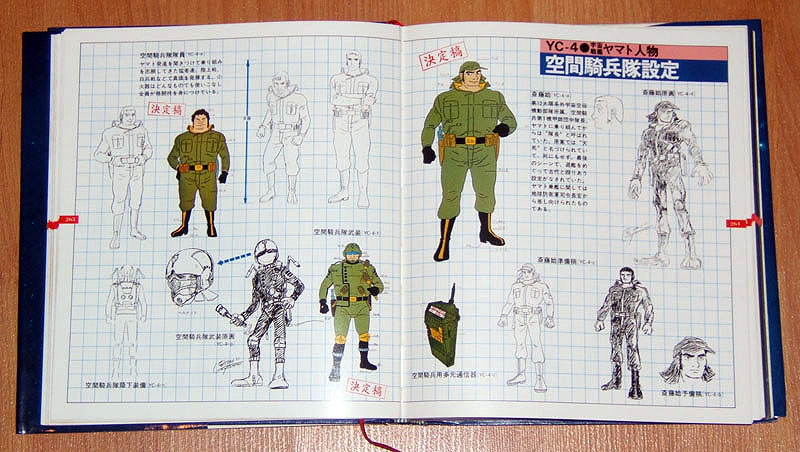 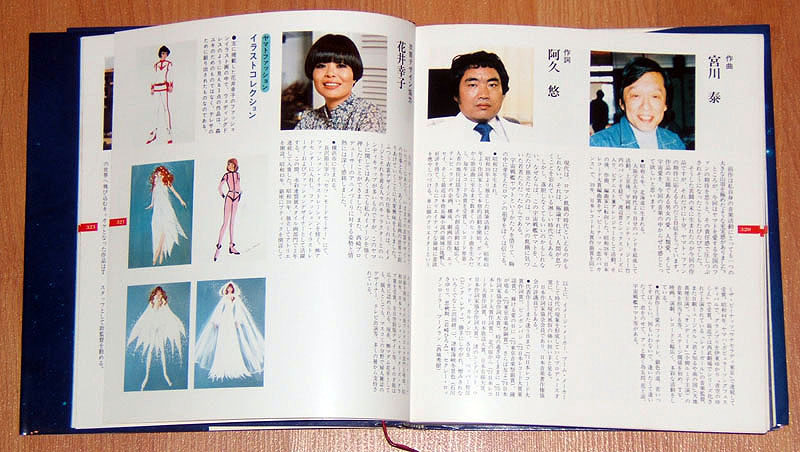 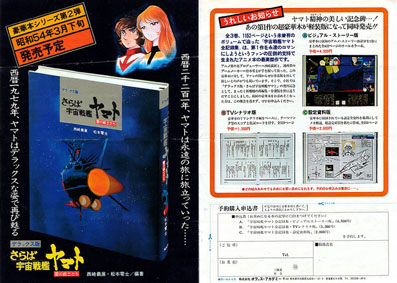 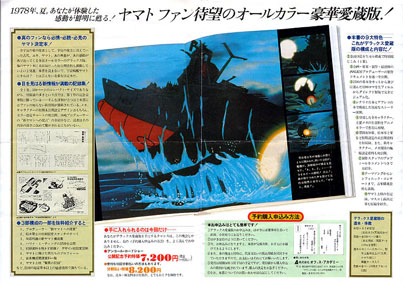 Above: 2-sided promotional flyer (click on either image to view an enlargement)

The book originally sold for about $70, and appears not to have been made available at a rate for installment payments. The mini-foldout flyer shown below also plugs the Space Battleship Yamato ‘Hot Blood’ novelization which was published a little over two months later.

Continue to Office Academy Publications for The New Voyage