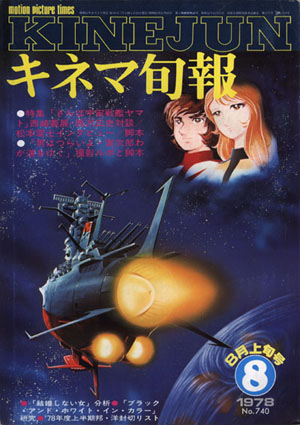 Alternately titled Motion Picture Times, Kinejun was a semi-monthly periodical from Kinema Jump Co. Ltd. that covered moviemaking from around the world. Space Battleship Yamato earned three cover stories during its production years, starting with this one in 1978.

Several pages were devoted to Farewell to Yamato, which included interviews with Yoshinobu Nishizaki and Leiji Matsumoto, an amusing look at the animation studio (shown at the end of this page), and most remarkably the complete screenplay of the film. Presented here is the Matsumoto interview, which was conducted by writer Nanae Sasaya.

It was rare (if not unique) for Matsumoto to be interviewed by a female journalist, who came to the table with special perspective as a reader of his early girl’s manga. 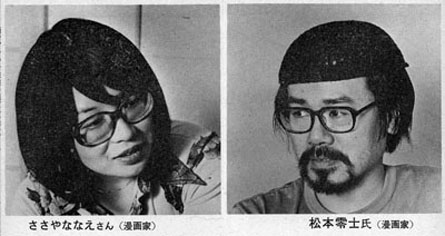 Interviewer: This new film is different from the first one. How was it different for you?

Matsumoto: Well, the first film was a compressed version of the first TV series. It took the 26 episodes of Space Battleship Yamato and reconstituted the story. This time it was planned as a movie from the beginning, so it wasn’t as rushed. However, there is a restriction to some degree, because there isn’t as much time to dig down into the individual characters. 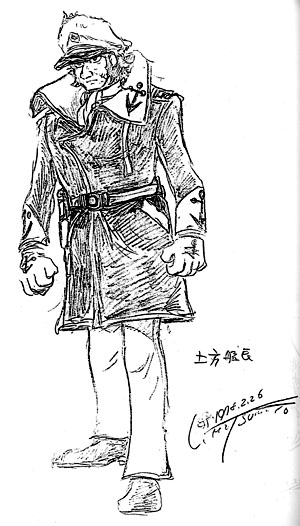 Interviewer: So there are fewer characters?

Matsumoto: No, the only character we don’t have is Captain Okita. This is a bad thing, but it was inevitable. I didn’t have control of the previous story, so I had a harder time on this one after we let Okita die. It troubles me that we killed off the character with the greatest impact.

I objected to this in the first place on the TV series. He was in bad shape, but I didn’t think it was a good idea for him to die. But the rest of the staff didn’t believe there would be a followup.

Interviewer: Okita was the father figure.

Matsumoto: That’s right. Yamato and Okita are inseparable. But there is a new character in his place this time named Hijikata. He upholds the role of Okita, but he’s a little different.

Interviewer: In many of your works the main characters are solitary types, but Yamato has more of a group dynamic.

Matsumoto: I think that’s unavoidable because of the setting. They are all on board Yamato together, so the relationship of those in the group is what makes the story. Even in large groups, the problems of individuals will appear. I think that deep down it is common for people on any trip to be tormented by loneliness.

Interviewer: Space Battleship Yamato came out of one of your older works, didn’t it?

Matsumoto: There was a Space Battleship Yamato chapter in Lightning Ozma [1961]. After that, I had a hero named Susumu Kodai in Lightspeed Esper [1968]. It’s one of my favorite names and I’m very attached to it. I also have a character named Susumu in Super Submarine 99.

Interviewer: What name are you most attached to now?

Interviewer: You don’t feel Yamato is your most important work…

Matsumoto: The initial concept was not mine, unlike Gun Frontier, which I created from the ground up. My ideas worked their way in because I was not inspired by the premise. So it’s true that it did not follow the direction that was originally intended. But for good or ill, I was not able to change everything. 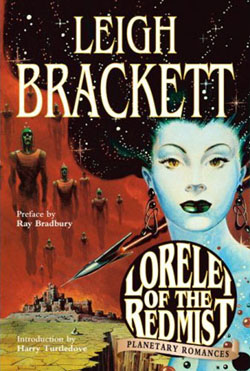 The Two Sides of Matsumoto

Interviewer: You once adapted a story co-written by Ray Bradbury and Leigh Brackett in an old SF magazine.

Matsumoto: Yes, it was titled Lorelei of the Red Mist. But it was difficult to draw as a manga [in 1958]. When I draw, it’s much easier to use my own inclinations. My best parts don’t come out when I adapt a novel written by someone else.

Interviewer: There seem to be two types of Matsumoto stories; the everyday type like Wadachi and the SF type, such as Yamato and Captain Harlock.

Matsumoto: But the same sort of common characters appear in both. If a scene is not relevant to something in daily life, it doesn’t inspire me. After all, every character has to eat to live and is less than perfect, so that’s an everyday condition. Even if the setting is SF with exotic mecha, human beings are fundamentally the same.

Therefore, I want to draw people who eat and sleep. 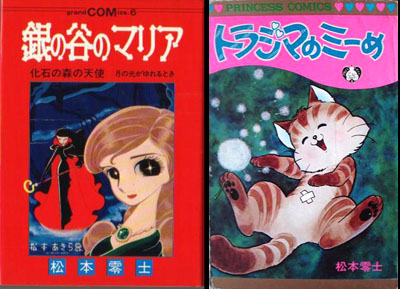 Interviewer: I remember reading Maria of the Silver Valley, Forest of Luna, Ace of the Sun, etc. But I especially remember crying when I read The Trajima of Mi-me [1975; a manga featuring Matsumoto’s beloved cat character, published by Princess Comics].

Matsumoto: That was easy to draw, because it was based on a real cat. It was tough getting into the world of girls’ comics until I drew Mi-kun. It’s nearly impossible for a male. I dreamed of drawing Maria of the Silver Valley [1958] when I was just 18 or 19. But it seemed abnormal once I passed 20, and there was no outlet for it.

However, I could draw the world of cats and dogs. It was an everyday thing, and yet went into a 4th-dimensional world, so I could get in the right state of mind for it to be interesting. It was sort of a guilty pleasure. 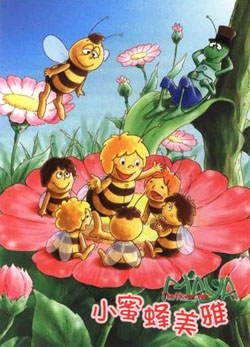 Interviewer: One of your favorite stories was Mitsubuchi Maya [Maya the Bee]…

Matsumoto: I always wanted to make an animated version. I wanted to draw all the storyboards completely on my own, but that was a somewhat selfish thing since someone else would have to put up the money. Animation requires money, and that part doesn’t change in any generation or for something like Mitsubuchi Maya. But I wanted to make something peaceful.

Matsumoto: That’s right, but looser and with a quicker tempo that kids enjoy these days. But no matter what, the animation of Disney and Fleischer still hold an immovable influence in my mind. If one wants to make exceptional animation, you look at Disney in particular. Bambi and Pinocchio are the result of human blood and sweat. You can feel the youth, passion, and vitality of Disney in them.

I think the age of Disney came into existence because Sleeping Beauty was made in a businesslike manner. The fact that he made Snow White in his 30s is amazing. Therefore, I think I’m entering the world of animation too late. (Laughter)

Interviewer: What lies ahead for Matsumoto in manga and anime?

Matsumoto: They are both entwined and simultaneous.

Interviewer: Will you produce an anime movie?

Matsumoto: Possibly. Animation and special effects. Special effects aren’t just animal costumes, they are meant to look plausible. Star Wars and Close Encounters are good stories, but the addition of special effects give them better atmosphere and make them more plausible. They succeed in bringing childhood dreams to life. 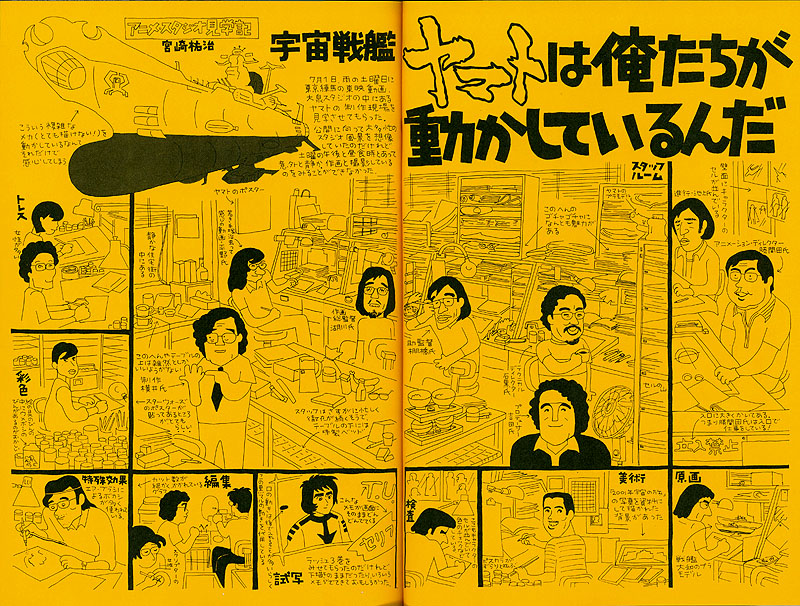