Anime conventions and their Yamato roots

“Conventional” (ha ha) wisdom says that the first American convention devoted to Japanese animation was Project A-Kon 1990 in Dallas, Texas. This prototypical event was instigated by a group of Texas anime fans gathered under the banner of Star Blazers’ “Earth Defense Command,” a Space Battleship Yamato fan club that grew to embrace all of Japanese animation. As of this writing, Project A-Kon is preparing for its 20th show.

But was A-Kon the first anime convention in North America? No. Not even close. For years, we’d seen references and offhand comments about a “YamatoCon” that was held in the Dallas area years earlier. Were these references true? Our crack team of researchers donned their explorer togs, dusted off their pith helmets, and began the harrowing search for enlightenment. Well, to be honest we sent some emails. Here’s what we found… 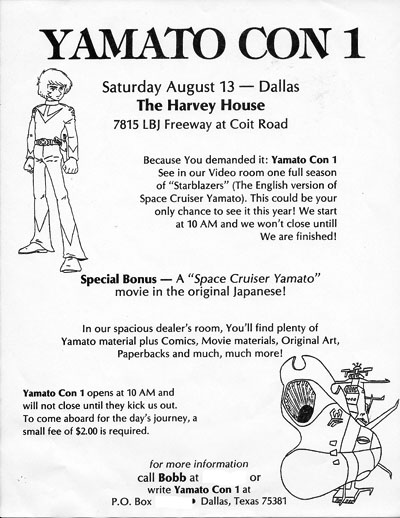 The first YamatoCon – that is to say, the first American fan convention devoted to Japanese animation – was held on August 13, 1983 at the Harvey Hotel in Dallas Texas. This one-day affair was the brainchild of Mark Hernandez, Don Magness, and Bobb Waller, each of whom had experience in the Dallas comics/SF fandom community and each of whom put up their own hard-earned cash to make YamatoCon happen. Scheduled the next-to-last weekend before school started, Mark Hernandez remembers the planning being as simple as getting commitments from dealers, finding a venue, and setting a date. Yes, it really is that easy to start a convention.

Programming consisted of the first 26 episodes of Star Blazers recorded off TV, shown in continuous order (minus commercials, of course) and a bonus Yamato film. This 13-hour Journey to Iscandar (“It was a long day,” says Mark) was a primary attraction at YamatoCon, 1983 being a time when VCRs and blank VHS tape were expensive, collections of Star Blazers on video were hard to come by, and the experience of watching Star Blazers outside the morning or afternoon UHF timeslot was a draw in and of itself.

Star Blazers on video wasn’t the only activity, of course. Like other conventions past and future, YamatoCon had a dealers room consisting of 22 tables of for-sale memorabilia. It might sound small by the standards of 25 years later, but we must remember that anime merchandise of the day – what was available in the States, anyway – hadn’t achieved the tidal wave proportions it would reach in the wake of Robotech, to say nothing of the total saturation of the post-Pokemon, post-Sailor Moon years. Anime merchandise in 1983 consisted chiefly of books and model kits. Roman Albums, Anime Comics, black and white manga volumes, the occasional manga weekly, and other publications streaming from Japan in the wake of the Yamato Boom battled for the anime fan dollar alongside model kits from Yamato, Crusher Joe and My Youth In Arcadia…not to mention the endless ranks of giant robot kits from unseen shows like Mobile Suit Gundam, Dougram, Ideon, and something called Macross. Along with the remnants of late 70s super-robot merchandise sold here as Shogun Warriors, the anime con dealers room in the early 1980s was far from barren. In fact, I still waste my money on that sort of stuff.

Layout maps for the dealers rooms of both YamatoCons 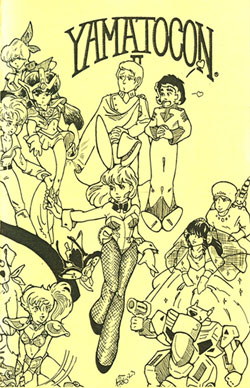 Also available at YamatoCon were copies of Mark Hernandez and Don Magness’s Star Blazers fanzine Argo Notes. Future EDC officer/contributor, fan artist and “Between Galaxies” author Logan Darklighter won the model contest with, naturally, a Yamato model. It proved to be a pivotal day in Texas anime fandom. Approximately 100 attendees and 8 dealers made the show an unqualified success. Don remembers it this way: “I remember we got to the hotel early and set up the rooms, then went out to breakfast. When we got back, there were 3 young men sitting on the front steps, one of them had a convention flyer. Mark asked if they were there for the con, and they said they were. We went inside and out of their hearing range and had a little celebration. 3 people had come! We had no idea that the place would soon be packed.”

A showing of 100 might not sound like a lot in today’s numbers (“that was about 100 more than we expected,” said Don). However, when considered against the attendance at general SF conventions in 1983 – a time when your absolute largest cons MIGHT draw five or six thousand attendees and your typical Dallas or Atlanta comic book show maxed out at three – YamatoCon‘s ability to nail down that many dealers and customers is commendable.

The show’s importance went beyond the one day; people across Texas and indeed, across fandom as a whole, who were unable to attend or who heard about it after the fact were spurred into action by the mere fact of YamatoCon‘s existence. That such a thing could happen – that Americans could organize and hold a successful anime convention – was both revelation and reassurance. Anime fandom was going to be more than just a video room grudgingly tacked onto the local Star Trek show or a half-page of merchandise in the back of the latest issue of Fangoria.

As Mark recounts, they had a “fantastic” time putting on the first YamatoCon (“We were very happy. We all made money and the fans ate it up.”), and they followed it up with a full-blown media convention named “Protocon” which featured an anime room, “but was not an Anime con per se.” The next YamatoCon would not happen until March 1986, and it was minus Bobb Waller, who by his own admission had “never been into anime.”

YamatoCon II is proudly announced to all passersby. The staff of YamatoCon II: Don Magness, Lea and Mark Hernandez.

The hustle and bustle of the dealers room at YamatoCon II and video room attendees being assaulted by flying candy during a break.

YamatoCon II‘s highlight was another video room with Star Blazers episodes and plenty more. Total attendance for the one-day show was over 300 – as Mark says, “I do not remember the exact headcount (we stopped counting around 3pm).” Attendees from as far away as Louisana and Oklahoma, along with another 22 dealers tables, were ironclad evidence that anime fandom was on the march. The nascent Earth Defense Command had a table at YamatoCon II along with other Dallas-area fan clubs and organizations. Mark’s wife and future Clockwork Angels artist Lea Hernandez helped to run YamatoCon II, providing artwork for the program book and marketing custom transfers of the YamatoCon logo. 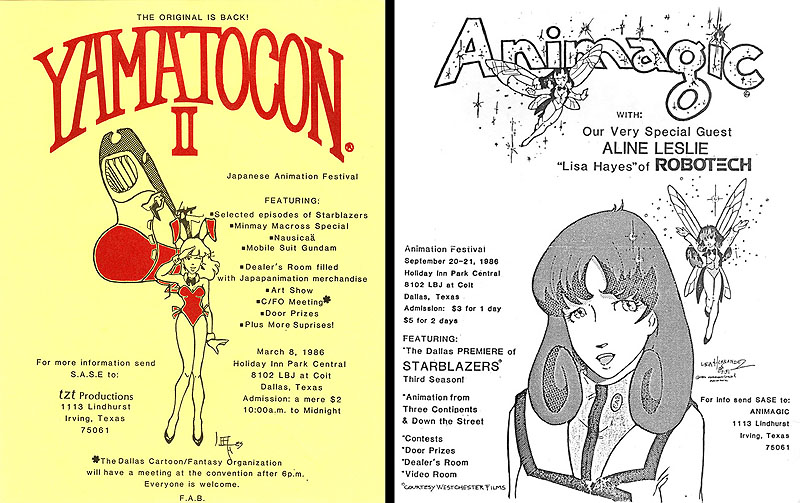 The second YamatoCon was followed in September by a two-day general anime convention in the same hotel, the Holiday Inn Park Central in Dallas. This show was dubbed “Animagic” and its guest, perhaps the first anime con guest, was Aline Leslie (Melanie Macqueen), who provided the voice of Lisa Hayes in Harmony Gold’s Robotech series.

Anime con action in Dallas would spend the next three years expressing itself in panels and video rooms at general SF/comic shows like the Larry Lankford “Fantasy Fair” conventions held across the state, and at other Dallas shows like “Starbase.” Star Blazers fandom became a part of general anime fandom as Robotech and other shows captured the attention of new fans, and clubs sprang up across the nation supporting networks of tape trading, amateur-subtitling, and fanzine-writing.

When Project A-Kon sprang into being in 1990, the reaction was (to paraphrase Jules Feiffer) not so much, “how original” but rather, “but of course.” Anime conventions were poised to spring up in cities across the nation. The 1991 AnimeCon would split the next year into two California shows, Anime East in New Jersey would hit the East Coast, and before long the field would become as it is today, crowded with anime cons from coast to coast, all jostling for guests, dealers, and programming.

BUT…was YamatoCon the first anime-themed fan gathering in the United States? Can we follow the evolutionary chain even further back, to the protoplasmic progenitors, those quirky mutants venturing from beneath the waves to blink in the harsh light of a new land? 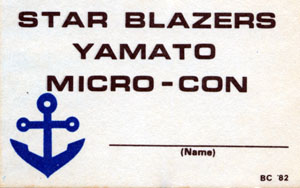 Our research has uncovered Star Blazers/Yamato fan gatherings on at least two occasions that pre-date YamatoCon. In September of 1982 up in Grand Rapids Michigan, the Star Trek/media event Babelcon hosted its own Star Blazers/Yamato “micro-con” spearheaded by the Space Fanzine Yamato team of Steve Harrison, Jerry Fellows, and Ardith Carlton. Taking over a hotel suite, the “micro-con” focused on the then-unseen Yamato III and the Yamato movies, giving Steve’s 42-pound VCR a workout. Jerry provided a mini-program guide and attendees even received their own badges. “People came in, watched stuff, had a good time. We had a small panel discussion or two talking about what cool stuff was out there (models, records, books) and where to get it,” Steve recalls.

And the trail goes back even further. Earlier that year – months before the Minicon and almost a year before YamatoCon – Mike “Star Blazers Fan Club” Pinto, Brian “Desslok’s Revenge” Cirulnick, and Rob “Gamilon Embassy” Fenelon commandeered space at the New York Creation Con and held their own Star Blazers Mini-Con. Something more than a video room, something less than a full-fledged convention in its own right, this event clearly demonstrates that, prior to YamatoCon, anime fans were experimenting with the process like a carload of teens with a gallon jug of Boone’s Farm. The spirit of the anime convention was clearly waiting in the wings, ready to be brought into the spotlight.

And the concept may go back even further than that. A few West Coast anime club meetings were drawing hundreds of people in the early 1980s, and anime titles had been a staple of programming in SF convention video rooms since the days of 16mm prints of Astro Boy. There may yet be anime con-like things lurking in our collective past, buried under years of forgetfulness.