The name alone made it glaringly obvious: for anyone who still wanted a spot on the Yamato publishing bandwagon, this was the last chance. And publish they did, rolling out everything they could think of in every format that had been proven over the years. The number of anime specialty magazines had topped out, and each one of them was filled with monthly coverage, determined not to be left behind. It was the culmination of everything that had come before with each major publisher pushing for the highest quality they could achieve. In other words, despite the looming finale of the saga, it was a good time to be a fan.

Not included in this bibliography are manga titles, novels, and special publications from West Cape Corporation. Links for all of them can be found at the end of this page. 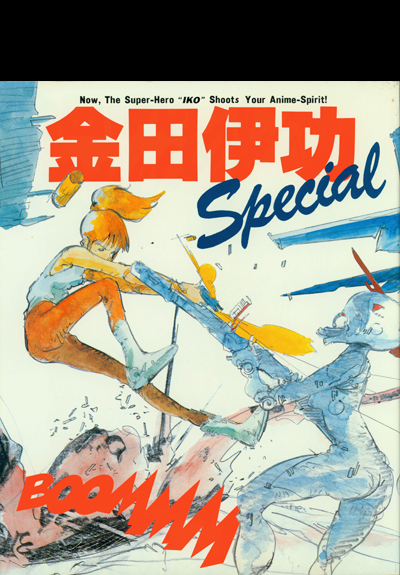 Yoshinori Kanada was a prominent anime director and designer in the 1980s. His vivid, dynamic style greatly enhanced the battles scenes in Be Forever, Yamato III, and Final Yamato. This art book showcased his work on many anime programs (along with some original creations) in both color and black & white, including a few of his early conceptual sketches for Final Yamato. This was, in fact, the first book of any kind to feature art from the film. 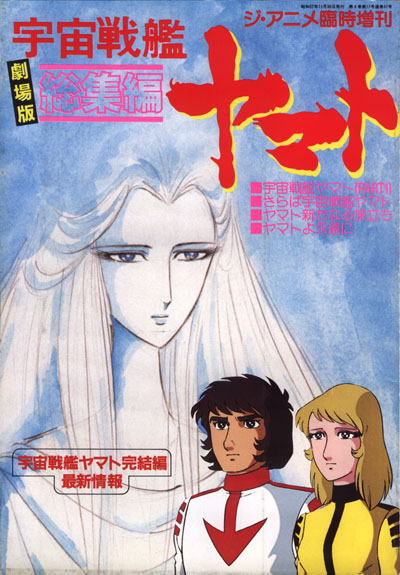 Another spinoff from The Anime magazine, this was the first book to carry a Final Yamato cover image and pre-release coverage. It began with photostories on the previous films, then moved into a feature tracking the Kodai & Yuki love story from its beginnings. A character and mecha encyclopedia was followed by an extensive glossary that included entries from Yamato III.

By the time he worked on Final Yamato, Yoshinori Kanada was an anime superstar, one of the first whose name alone became a recognizable draw. Fan admiration was expressed in this 54-page black & white doujinshi (fanzine) collection of his conceptual drawings for Final Yamato, combined with model sheets and animation layouts. Published in December 1982, it probably made its debut at the Winter Comiket for that year and was never seen again. West Cape Corporation followed up in 1984 with a large-format Kanada portfolio titled Yamato Super Drawing.

The doujinshi publisher returned that same year, rolling out a set of five “Iko” art collections at the summer and winter Comikets. These included layout and design drawings from across his entire anime career. Kanada also did exclusive work for publisher Tokuma Shoten (shown below). If you’re starting to sense that this was a guy worthy of further attention, you are correct; read our tribute to Kanada here. 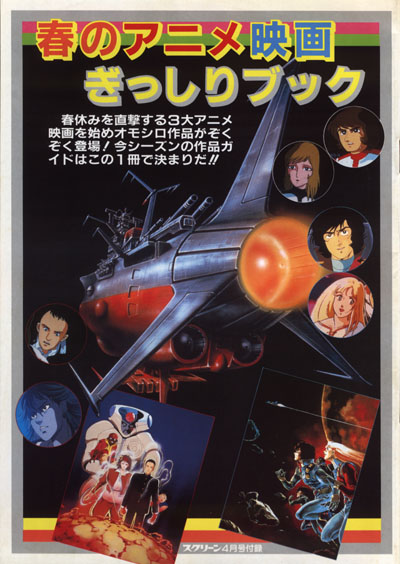 Anime Movies for the Spring

This was a special full-color insert from an issue of Screen movie magazine. It promoted forthcoming anime films for 1983, chiefly Final Yamato, Crusher Joe, and Harmagedon. 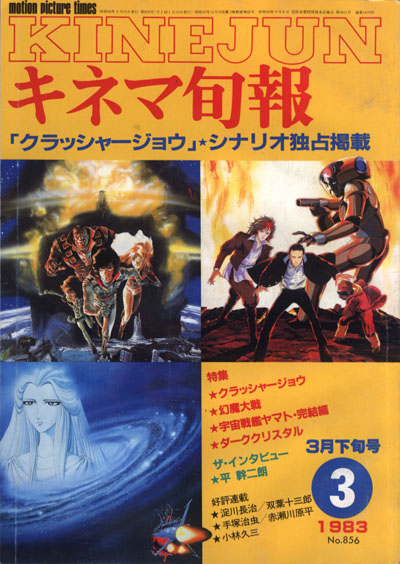 Yamato‘s third cover story on Kinejun shared space with the other two anime blockbusters for ’83, Crusher Joe and Harmagedon. The Final Yamato coverage included 9 pages of stills and analysis. 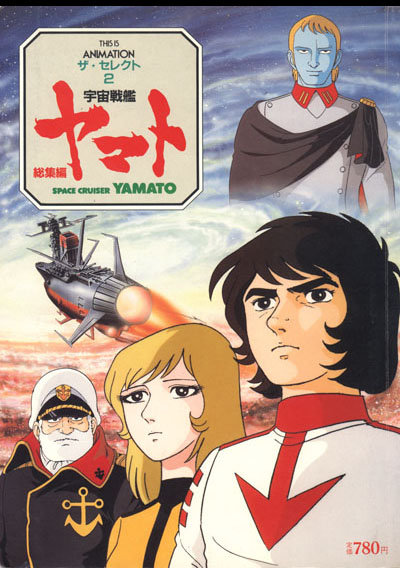 Space Battleship Yamato Total Collection
This is Animation The Select No. 2

Shogakukan’s answer to Tokuma Shoten’s highly successful Roman Albums was the This is Animation series, books that either examined anime as a general phenomenon or, in the case of the “Select” imprint, focused on a single topic. There were two Yamato volumes in addition to Macross, Orguss, and others. This was the first of the two, which kicked off with a bang: 13 pages of original color illustrations by anime staffers. This was followed by a story guide through Yamato III, some teaser pages for Final Yamato, and a character guide. A truly unique feature was Dessler’s Story, the first part of a feature that focused on Dessler’s life and development throughout the saga in two ways: a text feature and an overview of tactics, mecha, and characters. 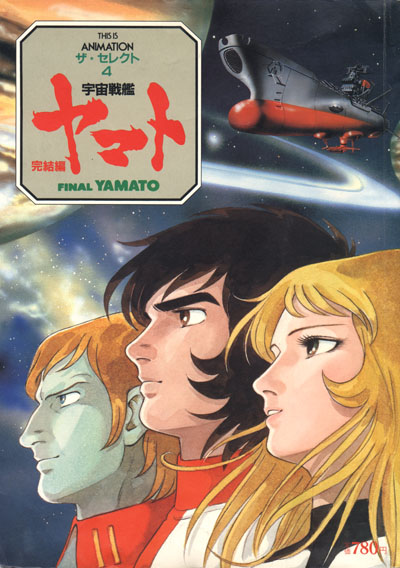 Final Yamato
This is Animation The Select No. 4

The second Yamato volume in this series matched the tone of the first, but was much more focused on Final Yamato. There was another great set of original illustrations, a photostory, art gallery, and character & mecha model sheets. Dessler’s Story part 2 continued its investigation with a text feature that incorporated Final Yamato and a look at Gamilas history & culture. This was followed by an interview with artist Yasuhiko Yoshikazu, a “cosmic history” of the Yamato saga, and some production notes. As indicated by the links in these descriptions, this pair of books has been referenced a few times over the life of this website.

Like its competitors, Kodansha threw extra effort into their coverage of Final
Yamato since it was obviously going to be their last opportunity. Whereas previous movies warranted only one volume apiece in the Keibunsha Encyclopedia series, the last was granted two, published on either side of the theatrical premiere. This had the effect of making Part 1 into a retrospective of the Yamato saga, with comparatively little on Final Yamato (though it did leak the first half of the story). Part 2 made up for this with substantial coverage; the rest of the story was retold along with a section of fan messages, encyclopedic pages of characters and mecha, staff comments, and music notes. The first four Keibunsha Encyclopedias were reprinted for a box set in 1999, but these two volumes were not included. 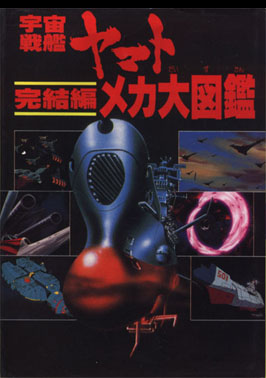 Published in the same format as the 1980 edition, this volume covered the mecha of the entire Yamato saga, this time exclusively in black and white stills rather than a mix of stills and artwork. It included a 32-page color photo story for Final Yamato.

As the major publishing licensor for Final Yamato, Tokuma Shoten had a deal with production designer Yoshinori Kanada, who produced the art for this cover and an accompanying poster. Animage also published Kanada’s work in its pair of Final Yamato novelizations and soundtrack LPs. The article in this magazine was only 4 pages long, but it was one of many that filled Animage and all the other magazines in early ’83. Released the same month as the movie itself, this would be Yamato‘s very last magazine cover of the production years, which made its blurb, “Goodbye Youth” especially poignant. 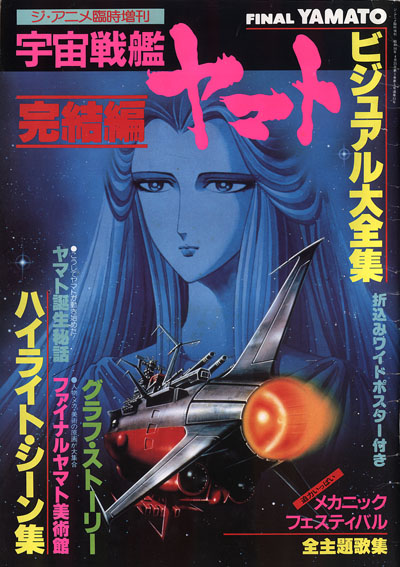 This tabloid-format special edition of The Anime magazine opened with large-scale highlight scenes and moved through a photostory of the film. Also included were model sheets in color and monochrome, a look at the original concepts for Yamato, and sheet music for the songs from Final Yamato. This publication was equal in page size to West Cape’s deluxe hardcover book, but was of course much thinner.

Shueisha’s fifth and final Roadshow special for the Yamato series was one of their finest. It contained a section of double-page highlight scenes, a character guide, photostory, song lyrics, the complete screenplay, model sheets, and a full-color retrospective of the entire saga. 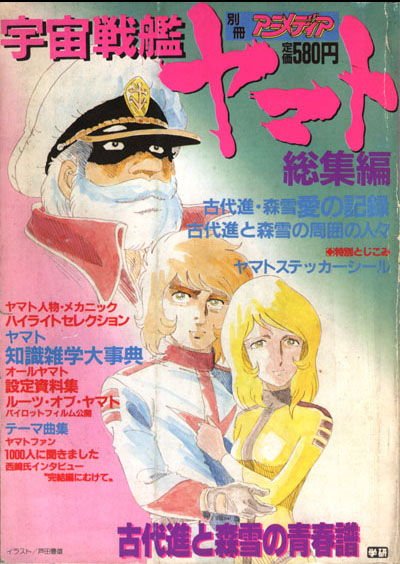 This comprehensive book was a spinoff of Gakken’s Animedia magazine, and was the first publication of the final year of the saga. It opened with a section devoted to characters and favorite scenes up to and including Yamato III, spent a few pages on the development of the first TV series, then went into a black and white encyclopedia of characters and mecha. After a few pages of song lyrics, there was a wholly unique section devoted to the mechanical intricacies of the ship and the protocols of being a crew member. The book closed with event reports and a brief glimpse at the forthcoming Final Yamato. 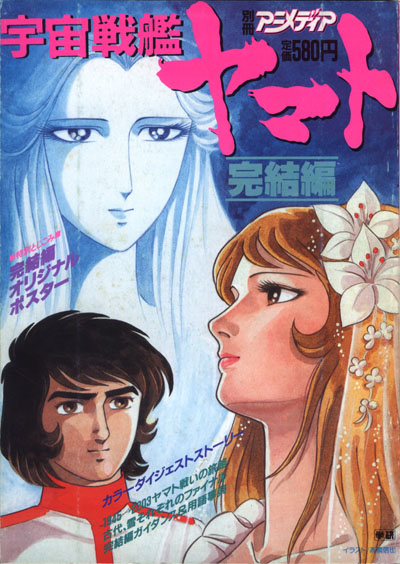 This was an excellent companion volume to the first one, opening with substantial coverage for Final Yamato. After a character section with all names given in both Japanese and English, there was a handy timeline of Yamato‘s voyages from 1945 through 2203, a Final Yamato story guide with lots of rare production art, a black & white encyclopedia of characters and mecha, and a glossary of terms. The book concluded with a production and event history of the film. 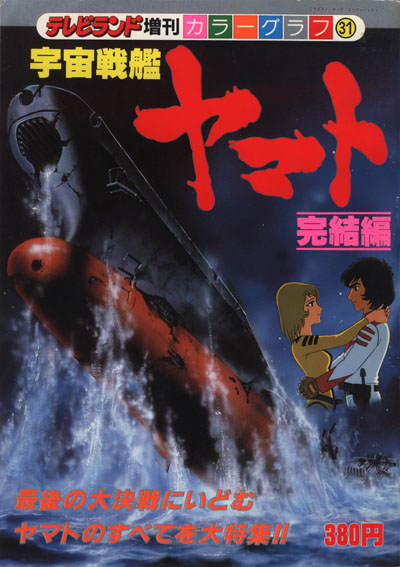 Though light on page count, this spinoff of Tokuma Shoten’s Terebi Land magazine was vibrant and colorful, and could have served as an excellent theatrical program book had Westcape Corporation not already made one. Its montage style of stills and paintings presented the highlights of the film with light text. 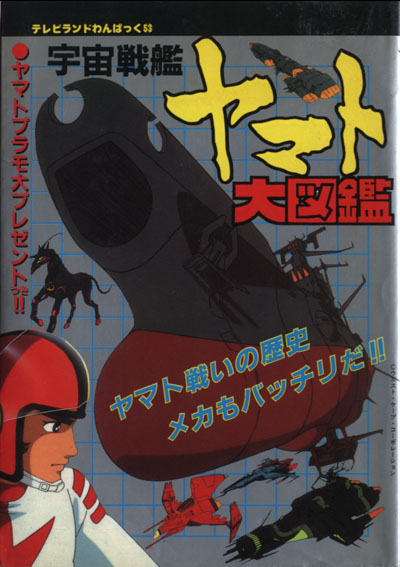 This was a guidebook to the principal characters and mecha of the entire Yamato saga and included some coverage of the Bandai model kits. The section devoted to Final Yamato was in full color; all others were in limited color or monochrome. 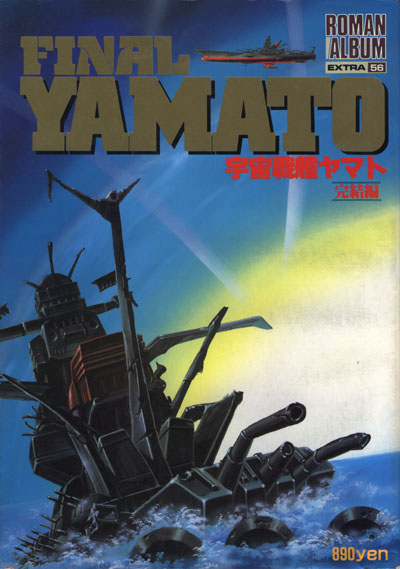 The last Yamato Roman Album, which was essentially the last book of the production years, carried Tokuma’s standard as high as it had always been, second only to the work of Office Academy/West Cape Corporation. The formula was well-worn by now; photostory, highlight scenes, art galleries, model sheets, and production notes. But the quality and completeness, not to mention the stunning cover image and a huge collection of Yoshinori Kanada’s concept sketches, made certain that the only Final Yamato book to surpass this one would be the Super Deluxe hardcover published by West Cape six months later. But over that stretch of time, Tokuma Shoten reigned supreme as the king of Yamato publishing.

Kodansha produced a number of papercraft books like this one for various different anime programs, but the fad was short-lived. On the other hand, it was an inexpensive alternative to plastic models and offered five construction projects in a single book: Yamato, Dessler’s battleship, a Black Tiger, a Cosmo Tiger, and Analyzer (IQ-9). The concept was revived in 2001 with the publication of Yamato Real Papercraft.

Continue to the Legacy Years bibliography

Left: this montage poster from the October ’82 Animedia pulled images from earlier films while the Animage poster at right (December ’82) was entirely new.