Like Yamato 2, the third TV series was pretty light in terms of products that actually had a “Yamato III” label on them. This is understandable when one considers that previous waves of merchandising were still around and still selling; thus the need to re-identify existing products was reduced.

Another thing series 3 had in common with series 2 was its most prominent sponsors. The Nomura Toy company had now been replaced by Popy (a division of the mighty Bandai), but Ezaki Glico was on board again to turn out another confectionary campaign as we will see farther down.

First we have a rare item indeed, a pair of promotional handkerchiefs issued by Fuji Television to remind all the nose-blowers to tune in Saturdays at 7pm for the new series.

Japan’s first anime boom, which Yamato fueled from 1977 to 1980, reached true critical mass when enough merchandising was in play to support the opening of anime specialty shops. One of the first was Animec, which also published a monthly magazine by the same name. They upped the ante by creating official merchandising of their own, shown above and below. This began yet another trend that continues today with shops doubling as manufacturers.

Laminated “Idol Cards,” or “Lamicards” for short, were common collectibles for fans of movie and music stars, so there was no reason popular anime characters shouldn’t have the same treatment. Animec made a set of ten for Yamato III and sweetened the pot with wallets to carry them in.

Two varieties of sticker sheets and pencil boards (shown both above and below) were also in the Animec lineup. They might have chosen the Be Forever monicker for its recognition factor, but all the images were pure Yamato III.

This was another pencil board, probably from the Yomiuri Network meant to promote Yamato III and three of its contemporary programs: Mighty Atom, Tetsujin 28, and Tomorrow’s Joe 2.

Animage and other anime specialty magazines pumped out all sorts of bonus items, including these pre-fab cassette labels featuring Yamato characters. The purpose of these was to highlight Kodai’s various manly relationships, culminating with Yamato III‘s Ryusuke Domon [Jason Jetter].

These coin purses from the Kagaya comapany contained not a single Yamato III image, but the name was still the selling point as shown in the center image. These would have been the last Yamato products of their kind, since no one else went this route after 1980. 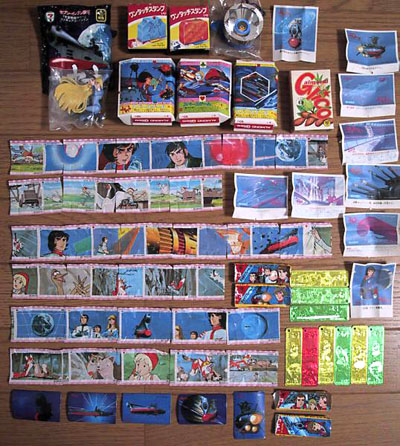 Ezaki Glico had been a major player in the 1978-79 Yamato merchandising campaign and kept a steady pace as the mega-successful Be Forever lead the way to the underappreciated broadcast of Yamato III. As has been recounted elsewhere, this was completely unanticipated; a huge box office take in the summer should have cleared the way for healthy TV ratings in the fall, just as they had in 1978. But it was not to be.

So much anime was crowding the airwaves that even Yamato had to fight for eyeballs. Faced with this turn of events, the Yomiuri network cut their commitment in half so the series would only run for six months and then clear the way for something that might perform better. This decision left a lot of licensors out in the cold, especially those who wouldn’t have products ready until after the show’s premature demise.

Glico, fortunately, was not one of them. They progressed smoothly from their first generation of Yamato confectionary right into their second without missing a beat. All of the actual images they used came from Be Forever, but coincided with Yamato III‘s broadcast, which must have done something to help buoy the ratings. With Glico products in every story, Yamato would have been hard to miss.

Well known for interesting and creative products, Glico came up with plenty of new ways to keep the fans coming back. Here’s some of what they came back for… 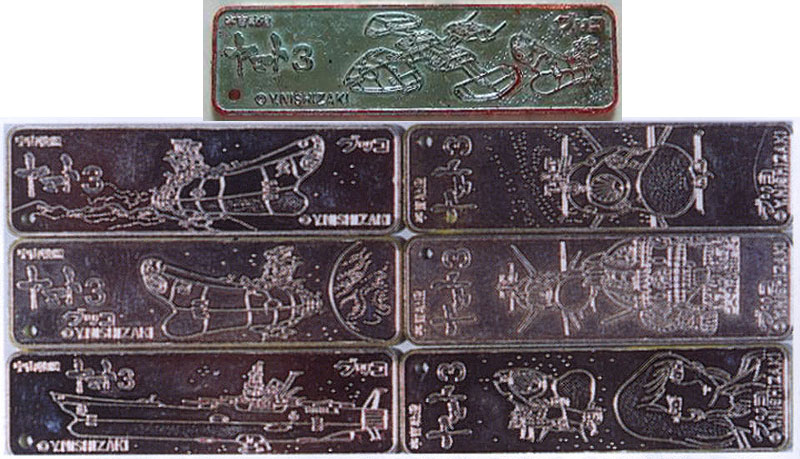 Sticks of Yamato bubblegum had previously been packaged with three different kinds of plate, and one of these, the “pikari [shiny] plate,” was retooled for Yamato III. There were 20 different variants, this time coated with silver enamel.

Glico’s “Caprico Choco” was a chocolate cake with yogurt inside, made in the shape of an ice cream cone. There were two different wrappers, which held both the snack and a bonus item… 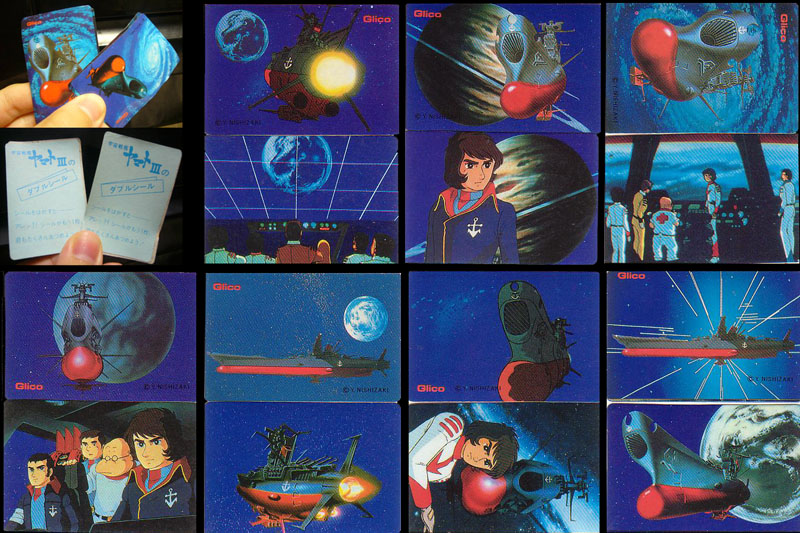 …called a “Double Seal,” which referred to a pair of layered stickers. There were 30 stickers in the set.

If you were looking for some Yamato food for your TV tray while watching Yamato III, Glico offered up hamburger stew (just add water, heat, and the indiscriminate taste buds of a child). For dessert, you could eat Yamato itself. Shown at right are two examples; the “Peroti Choco” was a disc of white chocolate on a stick and the “Choco Cookie” was a biscuit with Yamato on the surface. 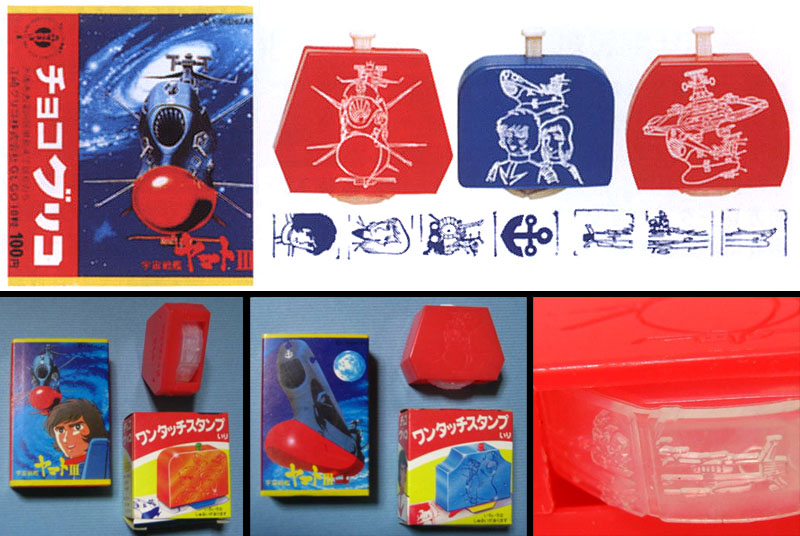 In the previous campaign, the “Choco Glico” drops came with badges. The Yamato III version came with gizmo called a “One-touch Stamp.” It had an internal plastic ring that could be turned to reveal different images, each 8 x 11mm. There were two variants of the ring inside three variants of the case.

“Almond Glico” was a box of almond-flavored candies with a whole new innovation called a “Space Game.” The outside back of the box had a montage of images keyed to playing card suits. 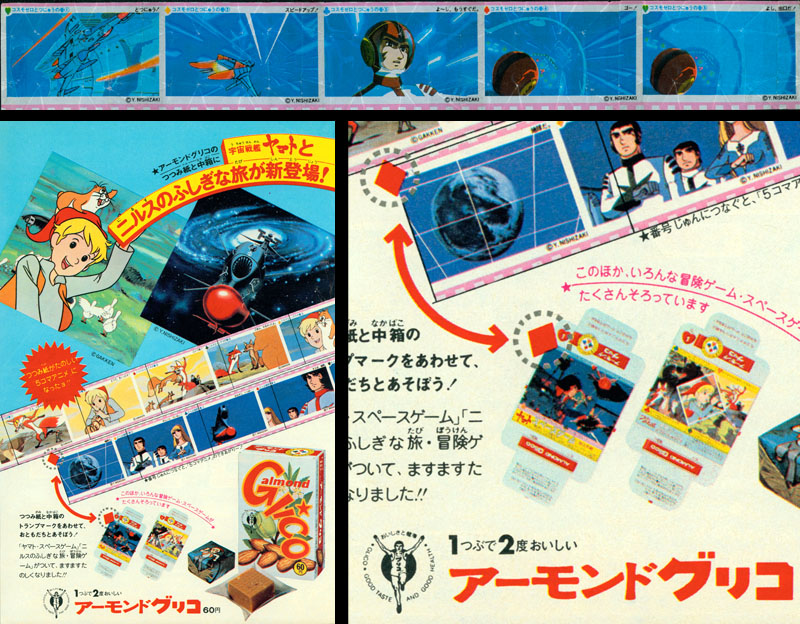 Inside was a portion of a 5-frame film strip story with corresponding marks. The game involved collecting and assembling all 15 the strips, each of which told a different mini-story. There were eight boxes apiece for Be Forever and for Yamato III. 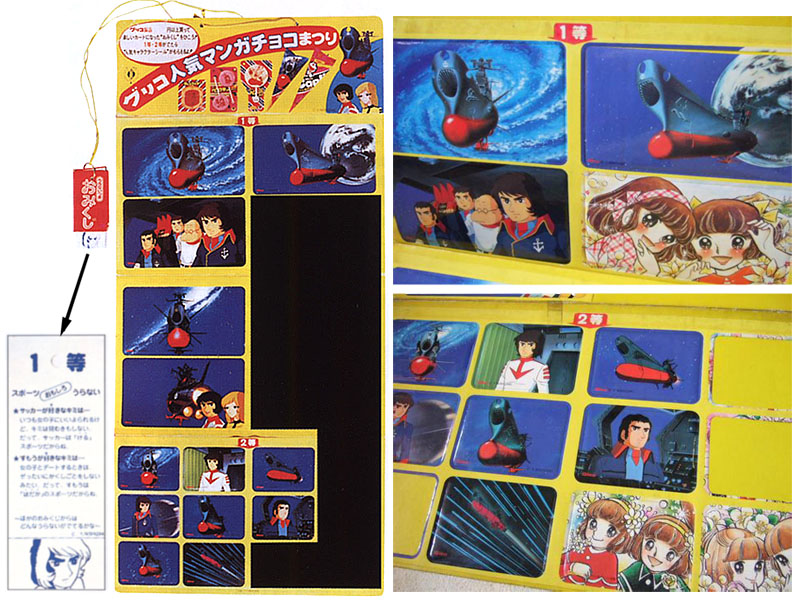 Glico’s “Popular Manga Choco Festival” was a prize campaign that began in October, 1980. For a limited time, buying Glico products would earn you two different types of stickers (large and small) or a fortune-telling card, shown here attached to the backing board. 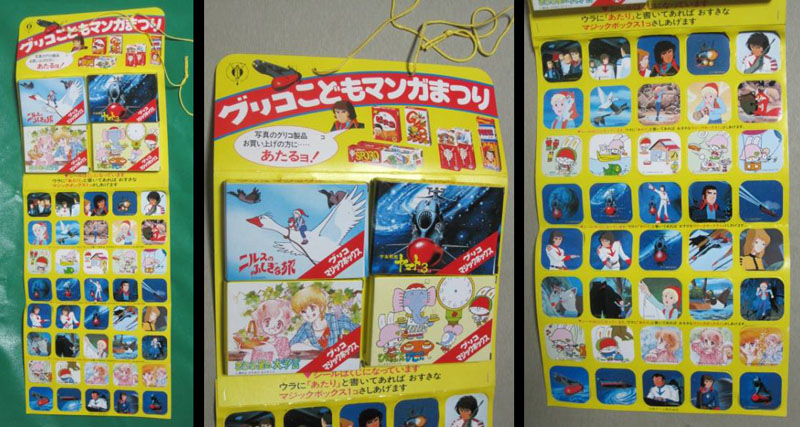 Along similar lines was this “Glico Children’s Manga Festival,” which made it possible to collect mini-stickers from Yamato and other anime shows (which all seem aimed at a much younger viewership) by buying various food products. 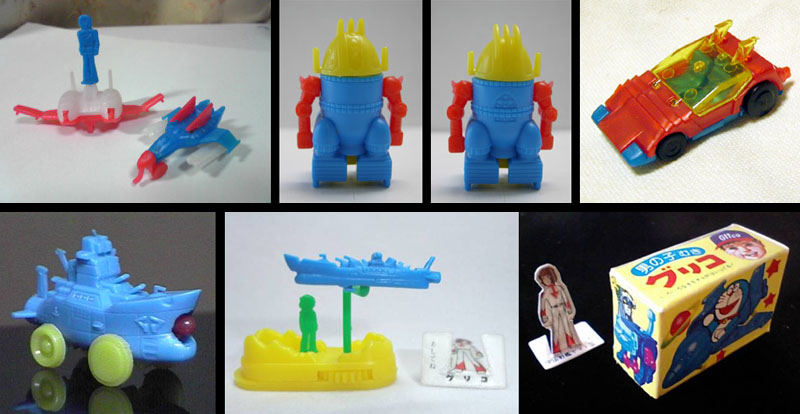 By far the cutest Glico prizes were these toys, packaged with “Sporo Gum.” They included a rolling Yamato, Kodai’s car from Yamato III‘s first episode (about 1.5″ long), a mini-Analyzer, and a rotating Yamato-on-a-stick. Candy toys like these were often lost or thrown out, which has turned them into extremely valuable collector’s items today.

Speaking of these toys, did you find it curious that some odd things appeared in early episodes and got almost no screen time afterward, like all those survey robots taken on board prior to launch? When you realize they were the subject of candy toy tie-ins, this starts to make sense.

A new style of pendant called a “Warp Zone” (about 1.5″ across) was packaged with Glico Pretzels in early 1981. When pressed from underneath, an image would pop out in a distorted concave lens shape. 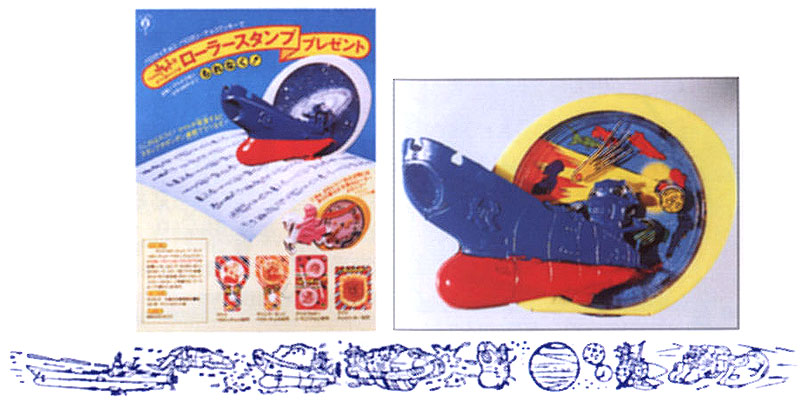 This “Roller Stamp Present” could be acquired in a campaign that ran from December 1980 to the end of March, 1981. A pair of application forms came separately with different snacks and were sent in along with 200 yen to purchase the gizmo. Above left is an ad from the January ’81 issue of Terebi Kun magazine. Below that is the print from one full rotation of the stamp, between 9 and 10 inches long.

Shown here is the full kit as sent to campaign winners with internal documentation, including an instruction sheet. 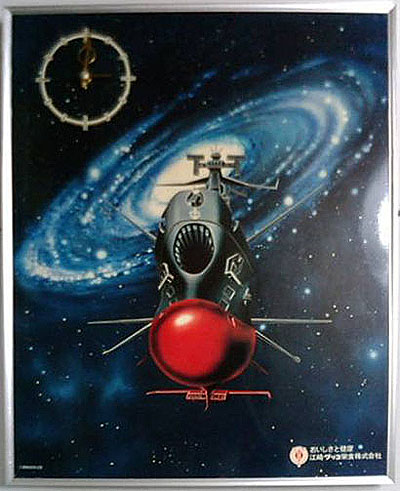 The most deluxe Glico product from this collection was a clock poster, possibly the object of another promotional campaign–one that probably involved a LOT of snacks. Certainly more than you could carry home in your custom Glico Yamato III paper bag (below) 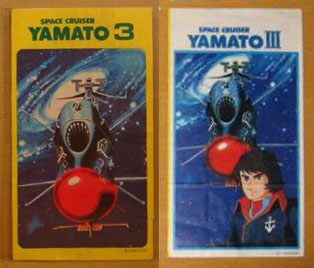