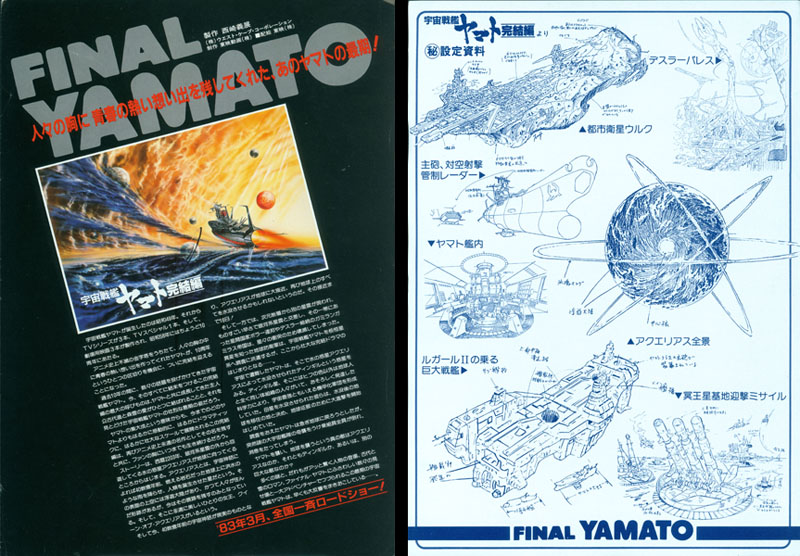 By the year 1983, a lot of evolution had taken place in the twin worlds of anime and anime merchandising. Thanks largely to Space Battleship Yamato, TV anime was exploding with more new programs than anyone could keep up with, and anime merchandising had more momentum than ever. By all accounts, it should have been Yamato‘s biggest year, but judging by the amount of merchandising this wasn’t actually the case.

Final Yamato was certainly on everyone’s must-see list (just like Return of the Jedi in America) and plenty of new products were readied, but the enormous amount of competition from other anime was consuming a lot of resources. This resulted in the campaign for Final Yamato actually being smaller than all the previous films with the sole exception of The New Voyage. On the other hand, it was evident after the experience of Yamato III that children were pretty much out of the picture by this time, so all the products were oriented toward older fans. 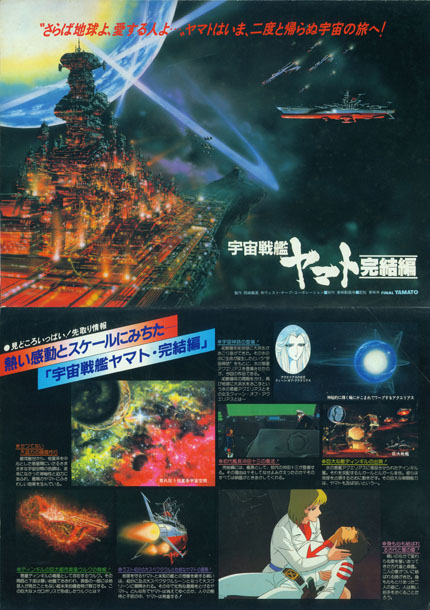 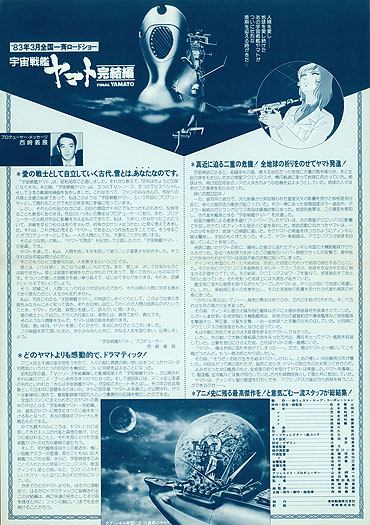 Flyers were (and still are) a primary means of movie promotion in Japan. Final Yamato had at least two in different formats. The first is shown at the top of the page, a simple two-sided color piece that promoted design art. This one was a double-sided foldout with extensive text on the back. 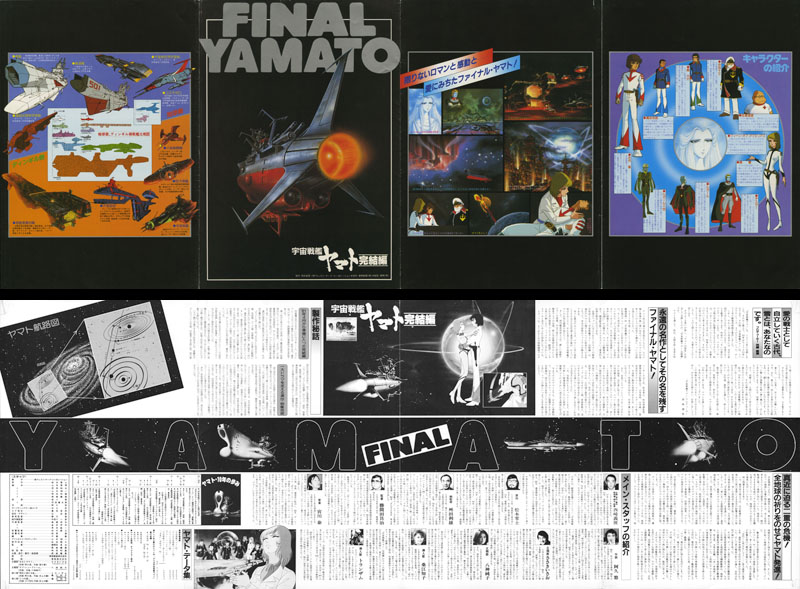 This one was enormous, a 10″ x 14″ pamphlet that unfolded into a 40″ wide double-sided monster. The scale of Final Yamato was off the charts, and unusual promotional pieces like this emphasized that at every level. 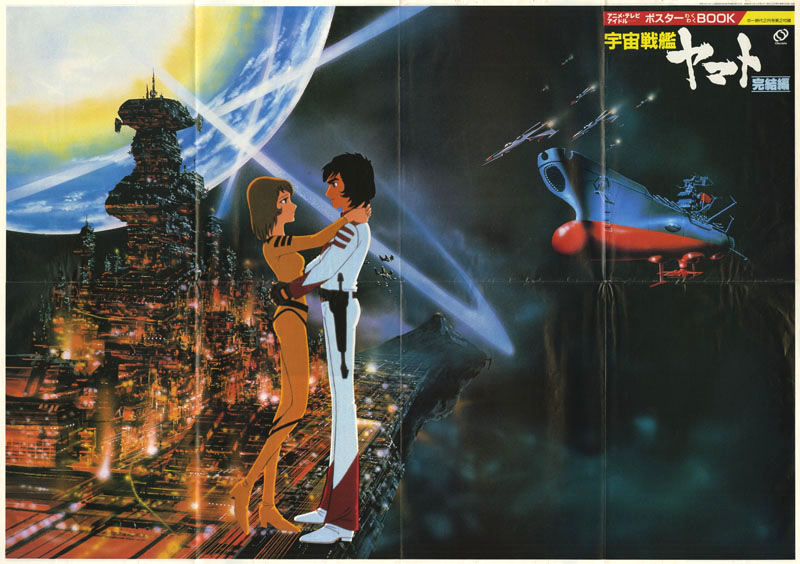 Here’s another, a huge 21″ X 30″ double-sided poster (titled “Anime TV Idol Poster Exciting Book”) that was inserted as an omake [free gift] in the February 1983 issue of Juniorhood, a magazine for junior high students. 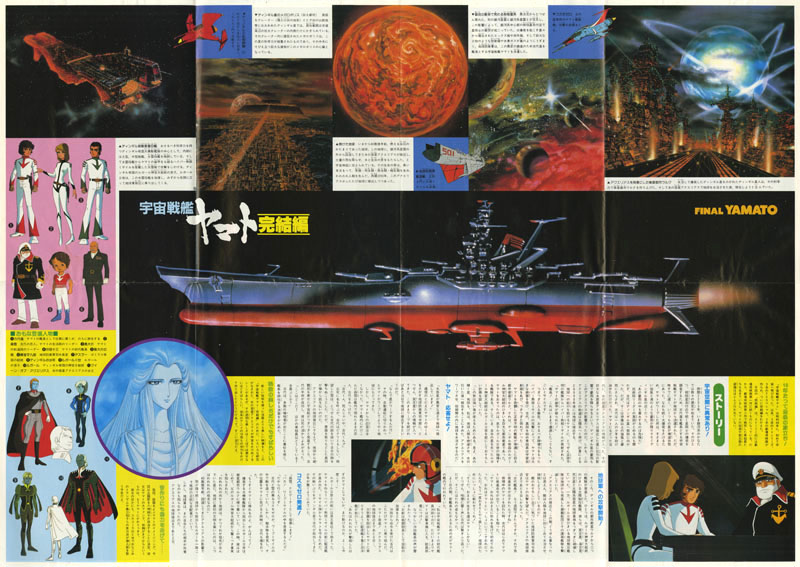 generously filled with text and images, promotional goodies like this kept fans digging through magazines and newspapers to find them during the runup to the movie premiere. (Special thanks to Sword Takeda for background info.)

Bandai had been one of the greatest beneficiaries of Yamato licensing, having released dozens of popular model kits that positioned it to become the dominant force in anime merchandising for decades to come. One of its other products was the Final Yamato jigsaw puzzle shown above left. The sticker set at right probably came from the Shueisha publishing company.

This mirror is somewhat of a mystery, possibly custom-made by a fan, but included here nonetheless.

The Toei Movie company issued another set of black and white stills for newspapers and other media. Many of those same images were also used for the full-color mini posters shown above and below.

Final Yamato poster art was available in many forms, most of them offered by the official Yamato fan club. These images come from other sources. Columbia Records offered the one shown above left, while the other (which included a 1984 calendar) came from Japan’s National Steam Iron Company. Really. Get a better look at it in the Final Yamato gallery.

…while these two were variants based on theatrical one-sheets…

…and this one immortalized the movie’s epilogue.

The Yamato production years were peppered with many different kinds of events from concerts to film screenings. 1983 was the first year Yamato became the subject of larger consideration with an exhibition at Family Land, a theme park in Takarazuka (near Osaka). It was converted into Takarazuka Garden Fields in 2003, but twenty years earlier it featured the “Big Space Project,” an examination of science fact and fiction. It ran from March 19 through June 5 as indicated on the flyer shown above.

Attendees could probably buy all sorts of Yamato loot at the park, but those specific to Family Land were a calendar card and a plastic badge. The memories, on the other hand, were priceless.

Continue to collectibles from the Legacy Years