This would be an odd dilemma to find yourself in, but go with it for a moment: you’re a Yamato fan and a model builder. (For an elite few, there’s no difference.) You’ve completed every single plamo [Plastic Model] from Bandai and Nomura, and there’s nothing left. And yet, there are still dozens of fantastic Yamato ships and vehicles you’d just love to see rendered in three dimensions. Where do you go next?

Believe it or not, enough Japanese fans fell into that dilemma to create an entire “shadow” industry that in some ways is more vibrant and expansive than the world of standard plamo-because it’s the domain of modeling maniacs. And it all happened in their garages.

From the very beginning, there were things about Bandai’s first Yamato kit that purists hated. Above all, it was the big fat windup motor where the third bridge should have been. If you happened to be in the older age group that the series actually attracted, you had no use for it. If you possessed the skills and motivation to shave it off and carve out your own third bridge, you had entered an elite circle of DIY hobbyists who would eventually take over the modeling world.

This was pretty much a solitary pursuit until 1977 when the December issue of Hobby Japan, a monthly magazine that appealed mainly to military modelers, ran an article that profiled some of the very fans who actually did carve their own third bridge. They’d done more work besides, becoming their own private modeling companies (see three pages from that groundbreaking article here). It was the first ripple of a tidal wave that would soon swamp Hobby Japan when Mobile Suit Gundam sent the craze into overdrive.

Today the number of models created and sold by independent companies far outnumbers standard plamo, and every new anime-based kit from Bandai or its few remaining competitors is quickly cannibalized and modded by exacting craftsmen who are seemingly never satisfied with mass-market products (though Bandai gains on them every year). Their work fills the pages of Hobby Japan, Dengeki Hobby, and plenty of other monthly journals with no end in sight. Yamato, of course, is a perennial favorite. 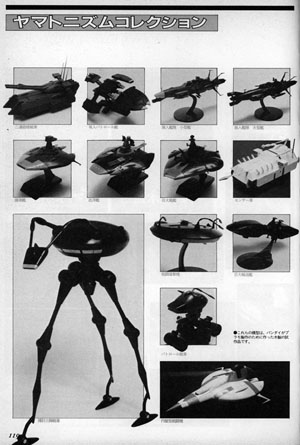 After the 1977 Hobby Japan, the next sign of expansion came in the Roman Album for Be Forever Yamato in October 1980. It included a full page of model photos (shown at right; click here to see an enlargement), only four of which actually came out from Bandai. The others were wooden prototypes that mysteriously never got to market. But one thing was certain: anyone who wanted to build one of those “lost” mecha – or a better version of something from Bandai – would eventually get the chance when garage kits stormed the plamo castle in the eighties.

So what’s a garage kit? Simply put, it’s a term that was coined for models created by small, independent companies (rather than major corporations like Bandai) that started in their garage workshops, basements, and living rooms and went on to form a significant new industry. To all indications, the mania began in the 70s when the “just for kids” mentality in the plamo industry gave way to a desire for increased detail, accuracy, and quality. It started mainly with military modelers who wanted to build obscure variants or prototypes and had to puzzle out techniques to form their own custom parts for existing kits.

Mass-produced plamo were (and still are) far too expensive for individuals to produce, since the dense metal molds have to stand up to several thousand hot/cold cycles and are manufactured to a very high standard. More affordable techniques for home hobbyists began with vacuum-forming, but when RTV (Room Temperature Vulcanizing) rubber came into fashion they discovered it could serve as an excellent mold for more than just customized parts and some began producing entire kits from top to bottom. The rubber could only hold up to a few hundred impressions before it began losing its shape, but that was no problem if you only expected to find a few hundred customers.

The molds were the first hurdle, the material was the second-and polystyrene resin was the material of choice, easy to pour and cure and capable of reproducing a high level of detail. Resin kits are a little trickier to build than their mass-market counterparts (most of them don’t come with pegs, tabs, or slots and can’t be bonded with standard model cement), but an enormous range of specialty products have grown up around the hobby and a dedicated modeler now has access to just about every tool or material they could ask for.

Garage kit manufacturers assemble several times a year at various hobby shows to sell their carefully-handcrafted works, and Yamato is always well-represented. The kits are similar to doujinshi (fanzines) in terms of license and copyright. Some are officially sanctioned, but only on a limited basis for specific events. So long as they don’t make a significant dent in mass-market sales, copyright holders turn a blind eye. This naturally makes the kits difficult to obtain outside Japan except by online sources. But thanks to those, we can go on an extensive photo-tour of these “Yamato Supermodels.” 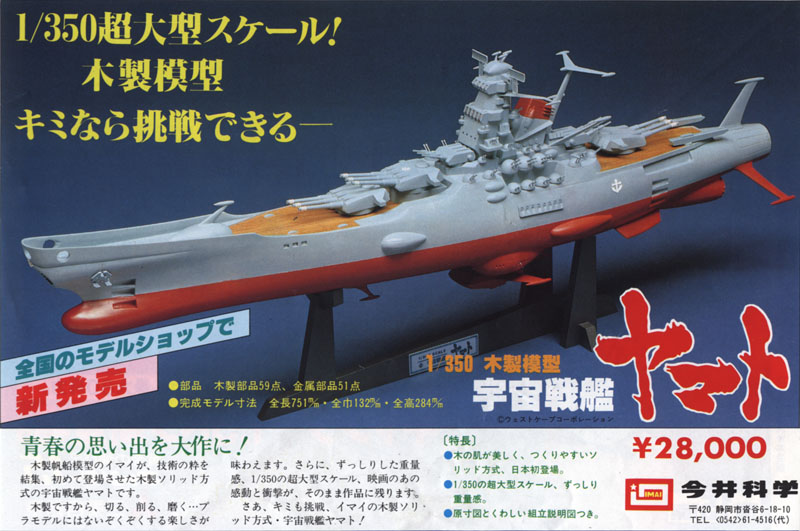 In a way, the first Yamato garage kit arrived the same year as the Be Forever Roman Album, 1980. It didn’t come from a private company, though-it was a product of Imai, one of the few rivals who could give Bandai a run for its money. Theirs was the first 1/350 scale Yamato (which Bandai wouldn’t match until 2007) and the parts were made of wood and metal. It stretched to almost 30 inches when built, and required the skills of a ship modeler to reach its full potential.

The kit was reissued in 1997 with different box art and a “Leiji Matsumoto” copyright instead of “Yoshinobu Nishizaki.” It was reissued again in 1999, this time without the white insignia decals. The image shown above is an ad for the original 1981 kit; see a gallery of photos here. See a Japanese blog documenting one modeler’s work with this kit here.

The next time Yamato fans heard from Imai was in July 1999, when they outdid themselves with a 1/350 “Big Model” Andromeda. It was more in line with garage kit technology, a combination of resin and cast metal parts that built up into the biggest Andromeda model made by anyone before or since. It was a product of the Leiji Matsumoto “revival” era (read more about that here) and each limited-edition kit came with an autographed card.

The true Yamato garage kit era began in 1990, when a leading hobby company named Wave rolled out three models: the Yukikaze [Paladin], the Gamilas Tri-Deck Carrier, and Domelus III, the high-speed cruiser of General Dommel [Lysis]. All were sculpted by modeler Seiichi Okano and made of resin with some cast metal parts. Okano took special pride in creating a bonus Black Tiger for the Yukikaze kit in the size of Bandai’s famed Mecha Scale models of the 1970s-filling in a gaping hole in that lineup. The Black Tiger was also sold separately.

See a gallery of the Wave kits here. 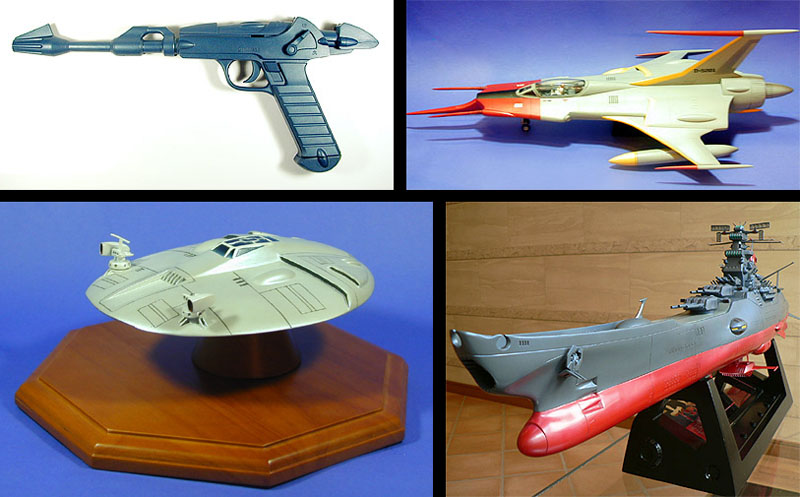 This manufacturer jumped into the game at just the right time to capitalize on the resurgence of Yamato via the Playstation games supervised by Leiji Matsumoto. In addition to a variety of character figures, they also created the kits shown here: a Cosmogun, a huge Cosmo Zero measuring about 18″, a Domelus “SMITE” ship, and a 1-meter long Yamato which still holds the record for the largest commercially-available Yamato anywhere. See Liberty Planet’s entire lineup here.

It took fifteen years, but the big guns finally gave in when B-Club and Popy, two arms of the many-tentacled beast known as Bandai, teamed up to debut a new line of resin garage kits in March 2005. The line would grow over the next two years to encompass 40 models, which included a select few re-releases that were fully assembled and painted in separate polystone-cast versions.

first half | second half

That’s it for big-name companies. From here on we must proceed with heads lowered, for we are entering the realm of the true artisans. 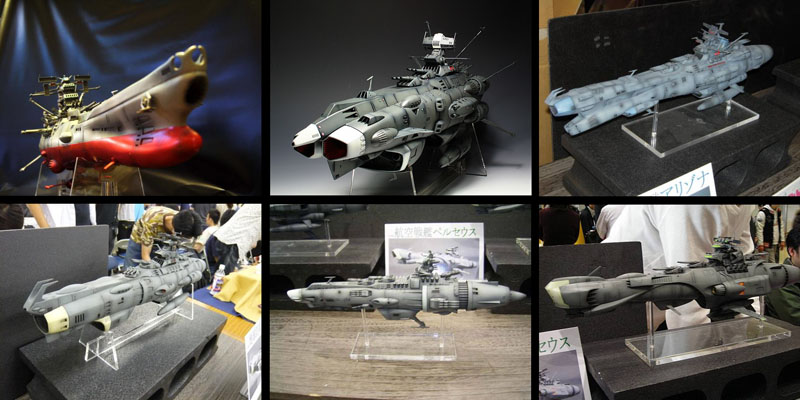 These are some of the best garage kits out there, big beefy versions of everyone’s favorite EDF ships with resin and brass parts aplenty. All are 1/500 scale, which puts them in the same class as Bandai’s biggest Yamato from the production years, roughly 18 inches long. As of this writing, the company has released six Yamato kits: Yamato Playstation version, Andromeda, Arizona, an EDF battleship, an EDF cruiser, and an original EDF design called the Perseus.

Each of these kits deserves its own gallery:

This company earned great acclaim for continuing Bandai’s Mecha Scale models in garage kit form. After B-Club, Ndopara is the most prolific with over two dozen Yamato models that include many Dark Nebula and Bolar vessels. 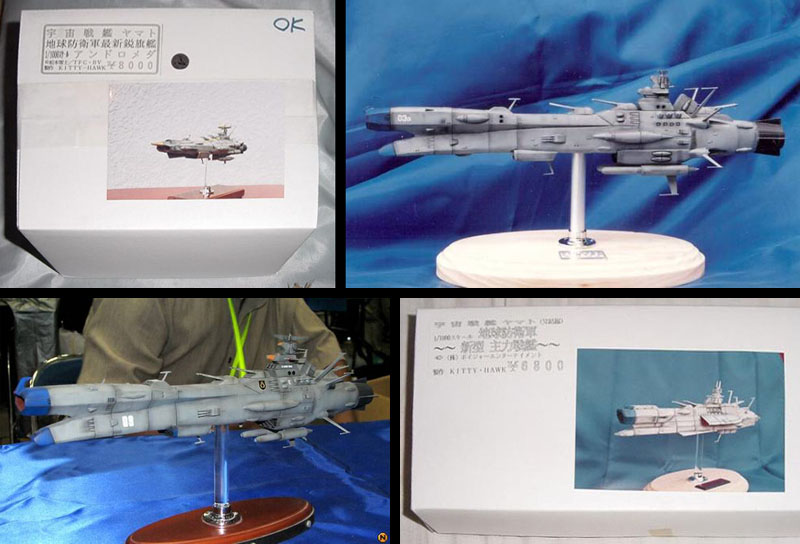 This company offers several Yamato kits from the EDF, Gamilas, and Comet Empire. The EDF ships include a mini-model of the Hero’s Hill monument (above right).

See a gallery of their kits here. 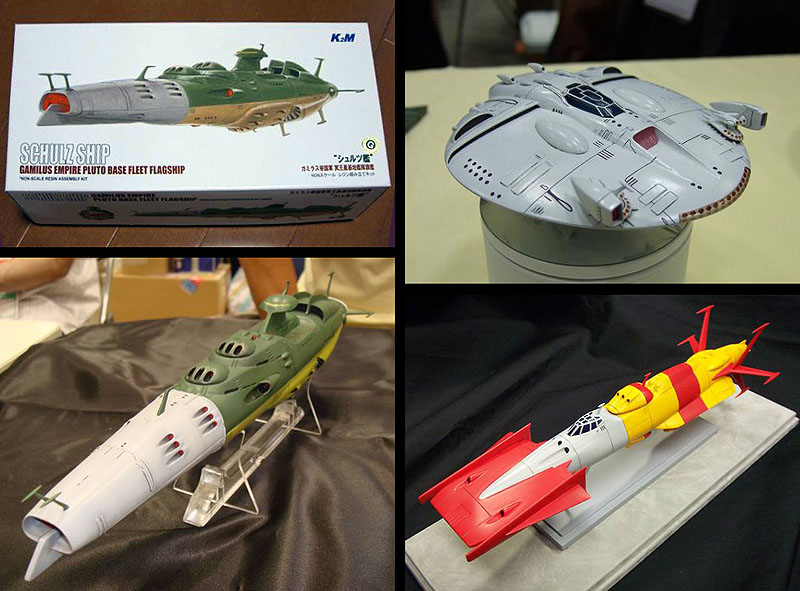 Another company with their own Yamato lineup, K2M has a nice range of Earth, Gamilas, and Comet Empire ships. Some of the box art was painted by Junichiro Tamamori, who went on to design mecha for Yamato 2199. See a gallery here. 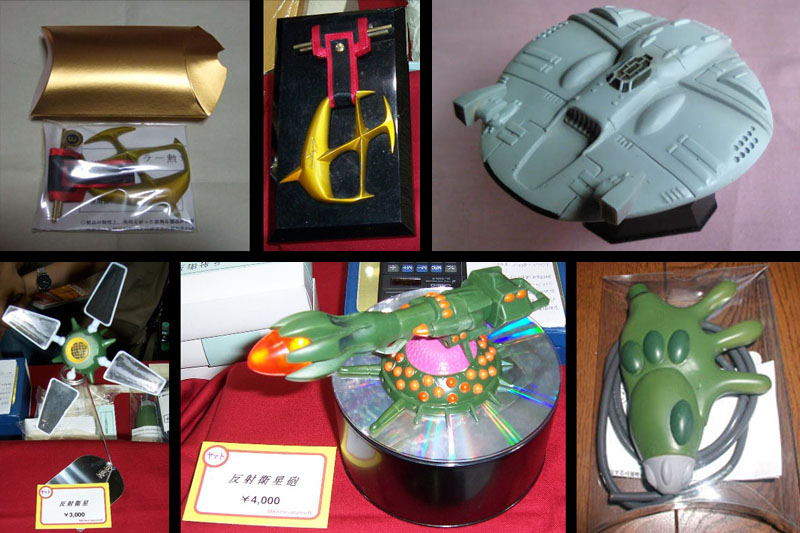 This company specializes in unusual Gamilas models. Shown here are a medal of honor, Domelus II, Reflex Gun, and Reflex Gun trigger. Their other kits include a worker robot, Desslok space mine, and Communications satellite. They also make a Yamato in the seabed, another covered in asteroids and still another with an asteroid ring. And for good measure, they also throw in a Cosmo DNA. (Unfortunately, photos of most of these are elusive.)

There are only two known Yamato models from this company, but both are very rare picks: the Gamilas Drill Missile and the Comet Empire Devastator fighter. 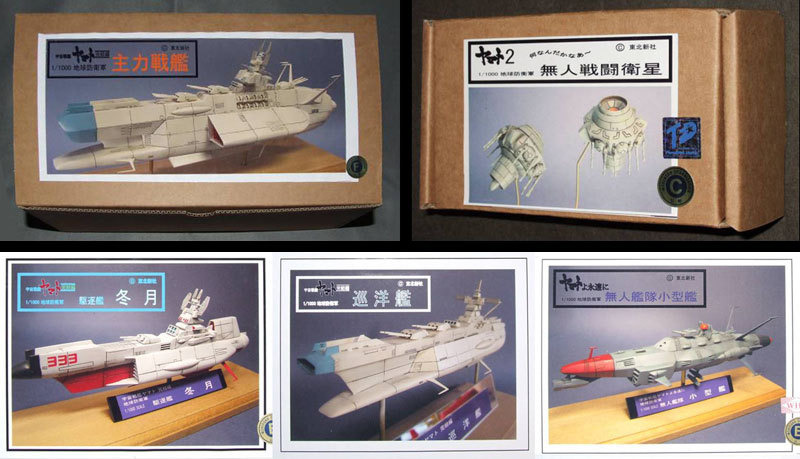 By now you may have noticed an abbreviation theme in the company names, which could just be initials of the modelers themselves. TFD is an EDF specialist with three ships from Final Yamato, the unmanned battleship from Be Forever, and the only known kit of the battle satellites from Yamato 2. 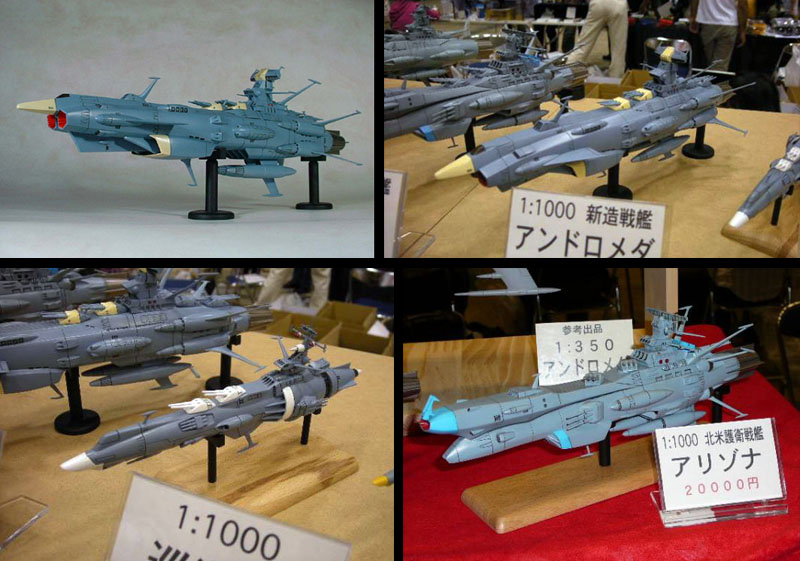 Yoiko Q appears to be another manufacturer offering its own take on popular EDF ships, as indicated by the presence of Arizona, Andromeda, and the EDF Battlecruiser in these photos. All are scaled at 1/1000, which conveniently matches Bandai’s very last Yamato kit of the production years. 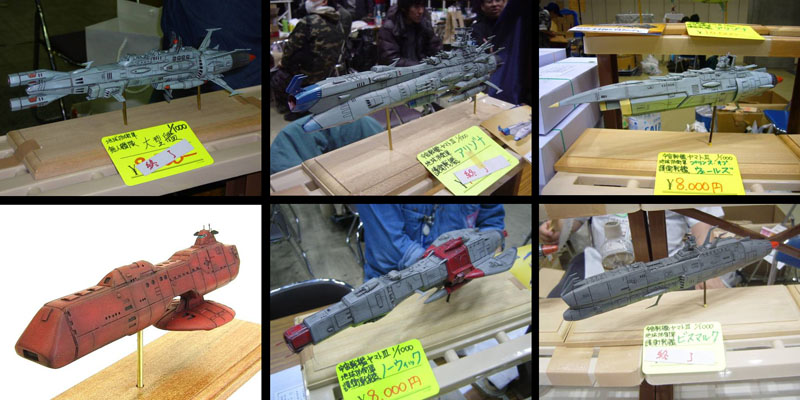 This is another prolific manufacturer, picking ships from all over the saga. See their galleries here: 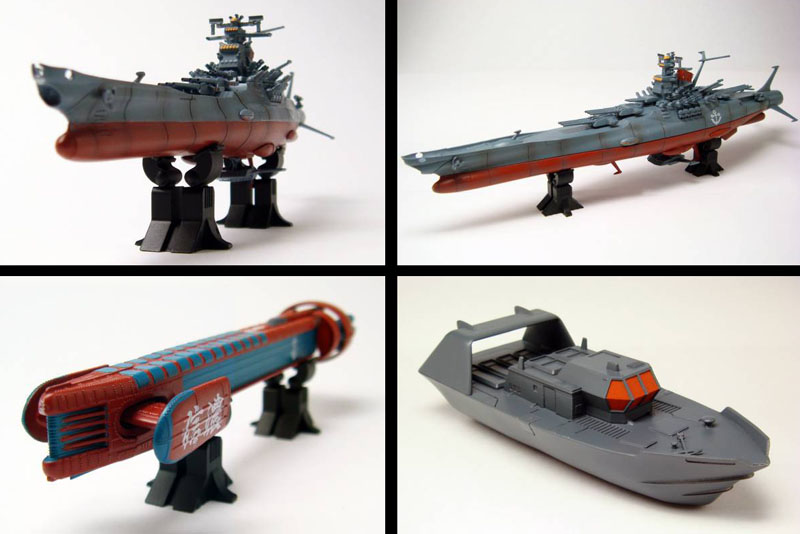 One of the newest entries into these ranks is this company, which released the “Yamato Imagination Series,” four kits from 2009’s Yamato Resurrection. Other than Ndopara, they are the only garage kit manufacturer to have ventured into this territory.

Visit Team Strike’s website here, and see a gallery of these kits here.

The kits from this group duplicate several others on this page, but they distinguished themselves with some truly original choices such as the Comet Empire Gatlantis, an exquisite Pleiades from The New Voyage and all three EDF ships from Yamato Resurrection.

See a gallery of these kits here. 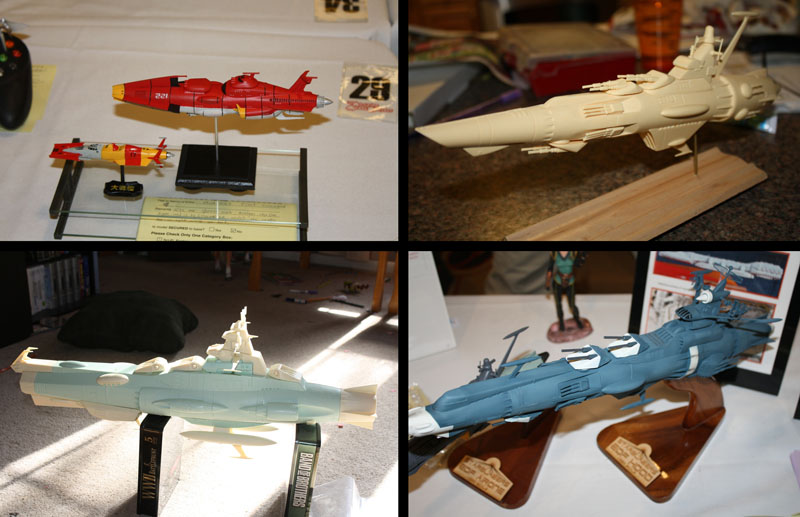 Here’s a switcheroo: AMP (which stands for Arvey Model Products) is the one and only maker of Yamato garage kits on American soil! In addition to various other SF favorites, they currently offer 8 different vessels from the EDF line including the medical shuttle, which hasn’t even been made in Japan. And unlike everything else on this page, they can be ordered from an English-language website. Visit it here.

Special thanks to superfan Steve Harrison