Eisuke Ogura (above left) presided over a table of model kits from both the mass-market and garage kit categories. Some, like the big 1/350 Yamato, were his own work. But most of the kits on display were crafted by his friend Nobuyuki Sakurai, a professional modeler and sculptor whose work has appeared in both Hobby Japan and Dengeki Hobby magazines. See a photo gallery of all the kits here.

The ebullient Asumi Kouna of the fan circle Wings Yamato was selling her impressive series of 9 Yamato Comics doujinshi. Her exuberant art style is shown above right, and her website can be seen here.

Ran Satoru was delighted that some stranger from another country would scoop up every issue of her delightful series of mini-comics that put Yamato‘s female characters through their comedic paces. Her circle name is Banzai Tulip, and her energetic art style is enormously appealing. She drew the cover art for Yamato Party’s 2001 program book.

Zenta Mizuno, who runs a one-man circle called Mizuno Shoten [Bookseller], has been profiled on our site before, in this article by superfan Carol Hutchings. He continues to produce his light-hearted Yamato Notebook series with a great sense of craftsmanship. He drew the cover art for Yamato Party’s 2008 program book. 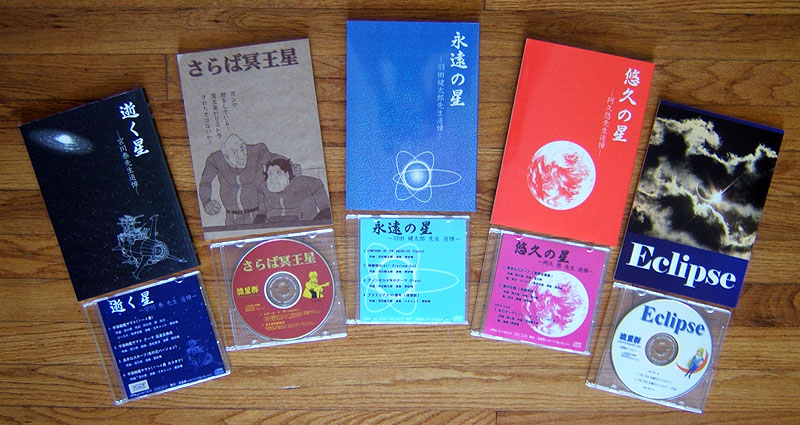 Ryuusei Gun (her pseudonym) is a different sort of doujinshi author altogether, a journalist into all sorts of Yamato-related ephemera. Her digest-sized series is into well into its thirties and selected issues are accompanied by CDs with cover performances (usually on synthesizer) of Yamato music. This, so far, seems to be the one and only source for a recorded version of the 4-verse theme song. She also creates a series of romance doujinshi about Sasha from Be Forever.

Fan artist “Jyuzo” is something of a legend, having been producing his own distinctive works since the days of the official Yamato fan club in the late 1980s. His style occupies solid ground directly between the anime and Leiji Matsumoto’s manga, synthesizing the best of both into something new. He drew the cover art for Yamato Party’s 2000 program.

Nobuaki Okamoto of the Oki Project circle had various products for sale, including a full-color Andromeda file folder and the latest edition of his manga doujinshi Silver Wings, which focuses on the space-school training of Cosmo Tiger pilots.

Hibisou Chitai (a pen name which translates to “Demilitarized Zone”) is a big fan of Gamilas, as evidenced by her many doujinshi about the dashing men who bow only to the big blue fella himself. 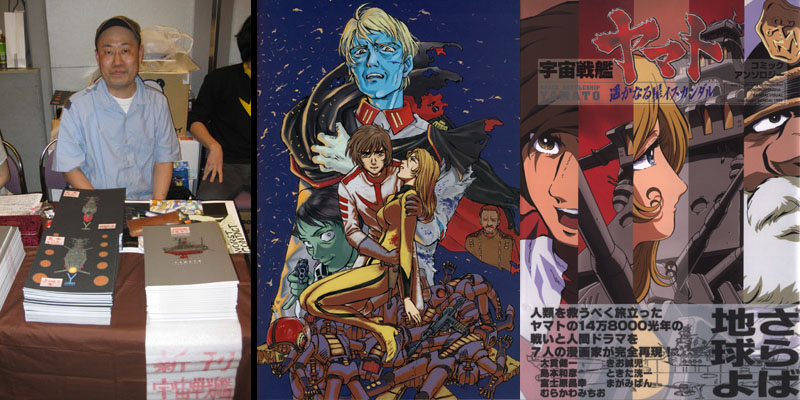 Michio Murakawa is an extraordinarily talented artist with some professional cred-he was one of the hand-picked contributors to the Yamato Comic Anthology published in conjunction with the Playstation games in 2000. He also has some very talented friends who contribute to his irregular series of ultra-high quality illustration books dedicated to Yamato: 2199, 2201 and Reunion (shown below) were published in 2005 and 2006. Murakawa’s newest volume in this exquisite series, Yamato Reactivate, was published shortly before Yamato Party 2009.

[UPDATE: Mr. Murakawa rose to the pinnacle of his craft in 2012 with his manga adaptation of Yamato 2199. Read my interview with him about it here.] 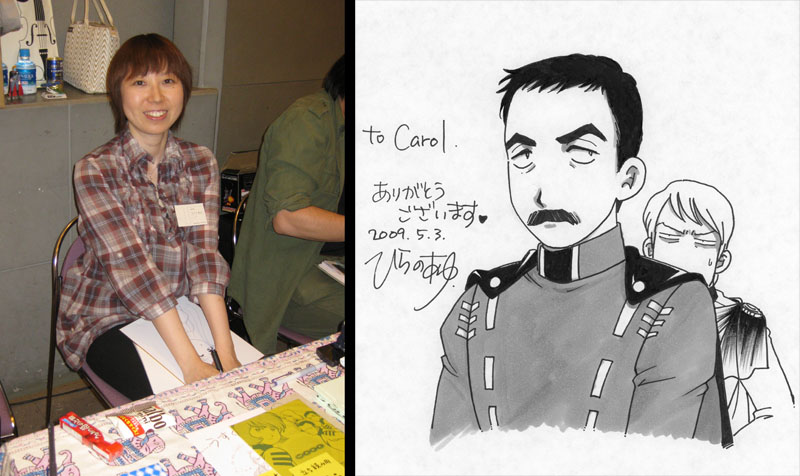 Last but certainly not least, we meet Ayu Hirano of the Gamilas Loyalist Party fan circle. One of the most popular and prolific doujinshi artists around, her comedic instincts are spot on and her take on the Yamato characters is unlike any other. She is also incredibly gracious, refusing to accept any payment to draw this Talan portrait for her number 1 American fan, Carol Hutchings. Read Carol’s tribute to Hirano here and see a substantial cover art gallery here.

Back to Yamato Party 2009 Report