As part of the run-up to the premiere of Yamato Resurrection in December, a unique event was held in Tokyo from September 19-23: a gallery exhibition featuring artifacts from the production years and some teasers for the film. Many Japanese fans attended, including a Japanese blogger with the username “Black Zero,” who took several photos and described them on his blog.

With his permission, we have translated his report for the benefit of English-speakers. Enjoy!

I had the luck of being able to see the exhibition on its final day, September 23, 2009. It was held on the fourth floor of the Maruzen Marunouchi office building in Tokyo Station Square. Photography was permitted, so I got a lot of pictures. There was a notice of the event in front of the first floor escalator. However, there was something far more prominent on display than this announcement!

Wow! A 5-meter long Yamato (1/50 scale?) right next to the escalator and the entrance to the building. When I examined its design, I was a little concerned about the slender shape of the bow. I was also worried about the length of the stern (from the third gun turret to the catapult) and thought about it for some time afterward.

The size of the bridge is a problem on other models, but it didn’t bother me here. Also, the third bridge, which is now the ship’s Data Processing Center, is painted blue where it used to be red. In previous designs, this area was located in front of the first gun battery. Can it still detach and fly separately from Yamato? 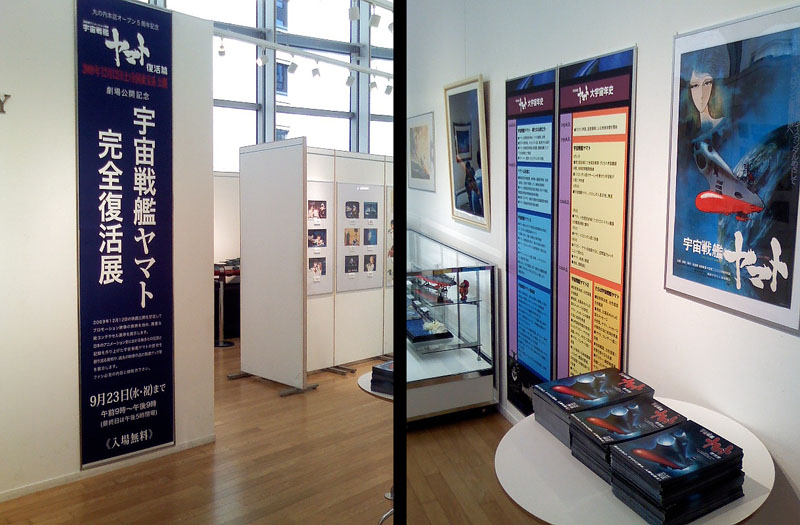 Near the entrance of the exhibit hall. I was disappointed that the venue was smaller than I expected. It doesn’t appear in this photo, but manga and mooks were sold near the entrance. They were selling Akita Shoten’s new single-volume collection of the Leiji Matsumoto manga, which I confirmed is the 65th edition. 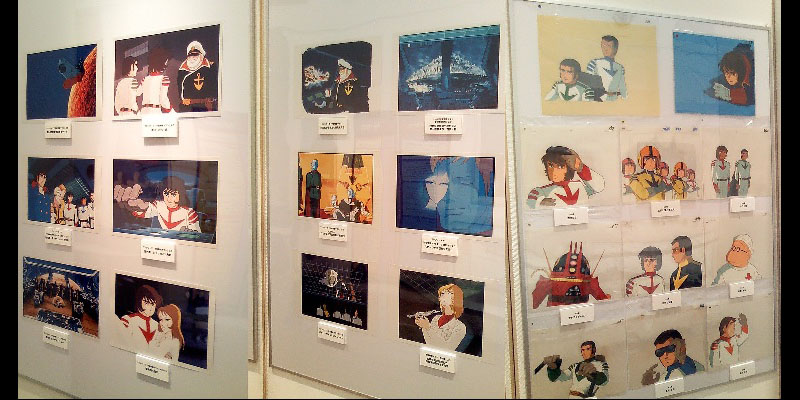 Cels and stills (?) from Final Yamato were exhibited. I wonder if I knew for sure which productions these cels were used in. 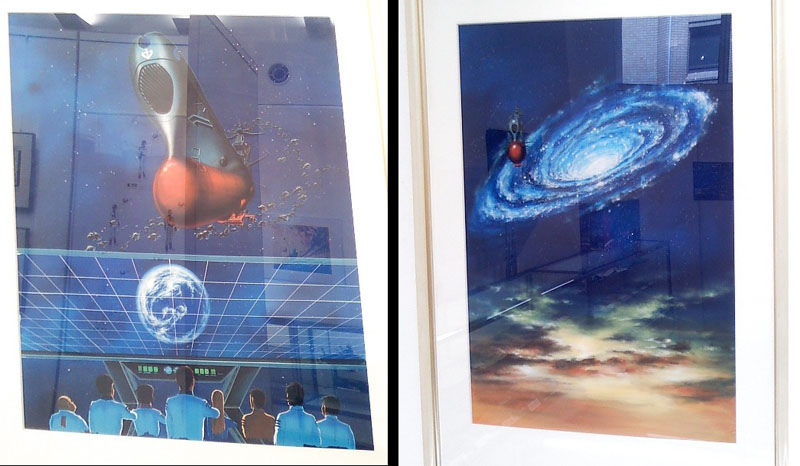 Original art (?) for posters from Final Yamato and calendar images from Be Forever. 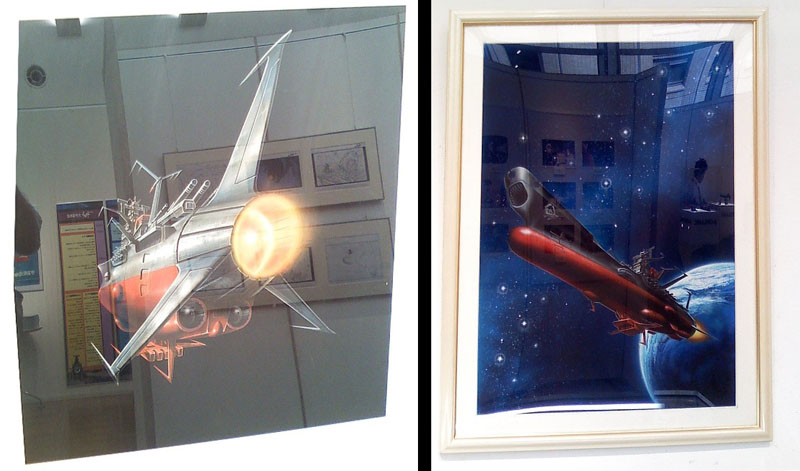 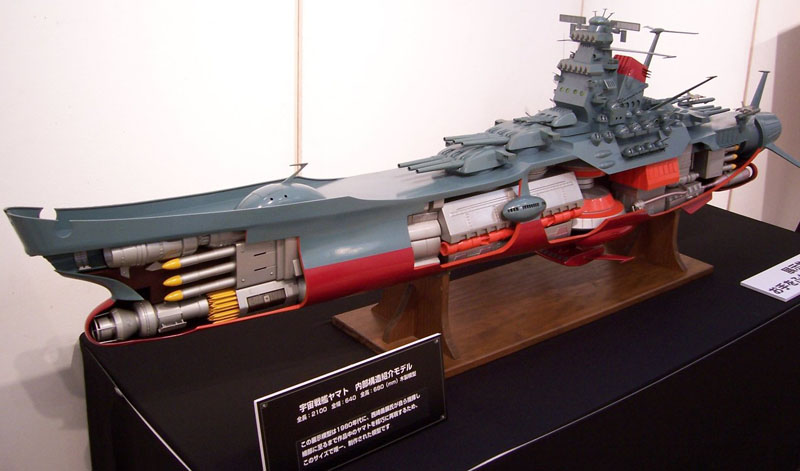 The explanation for this piece was that it was produced in the 1990s, but it looks like the “cut model” that was offered in a charity auction when the 70mm version of Final Yamato was released. It was broken in a few minor places. 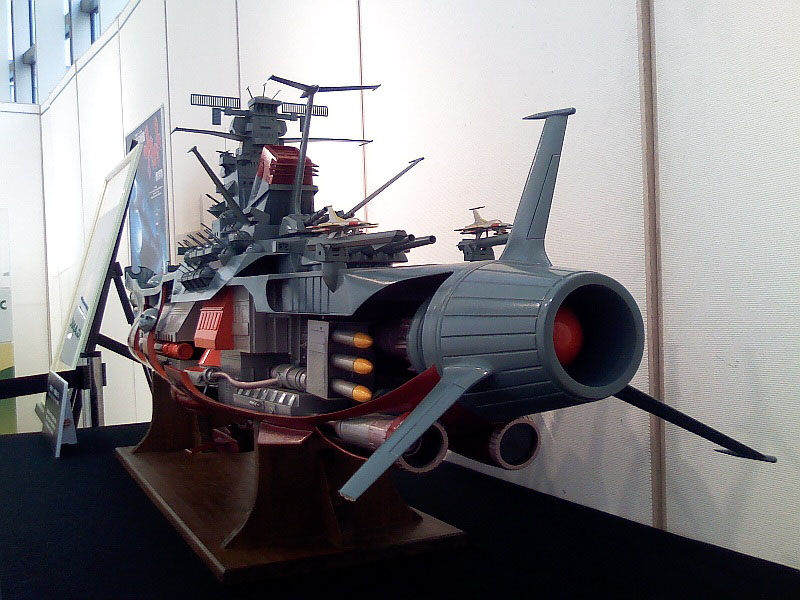 (Note: “Black Zero” is correct about the origin of this model, which was one of two made for exhibits of the production years. Read all about this unique model’s history – and the status of its duplicate – here.) 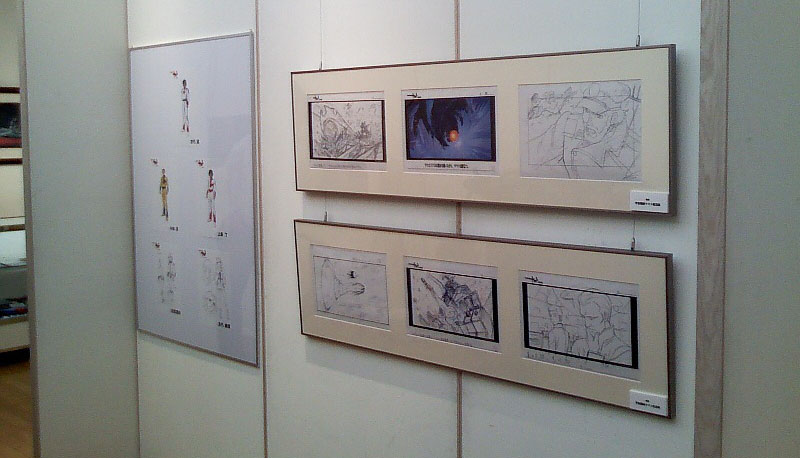 It was regrettable that only a few documents were displayed for Yamato Resurrection. Still, I enjoyed seeing them and they helped to reduce my anxiety about it. 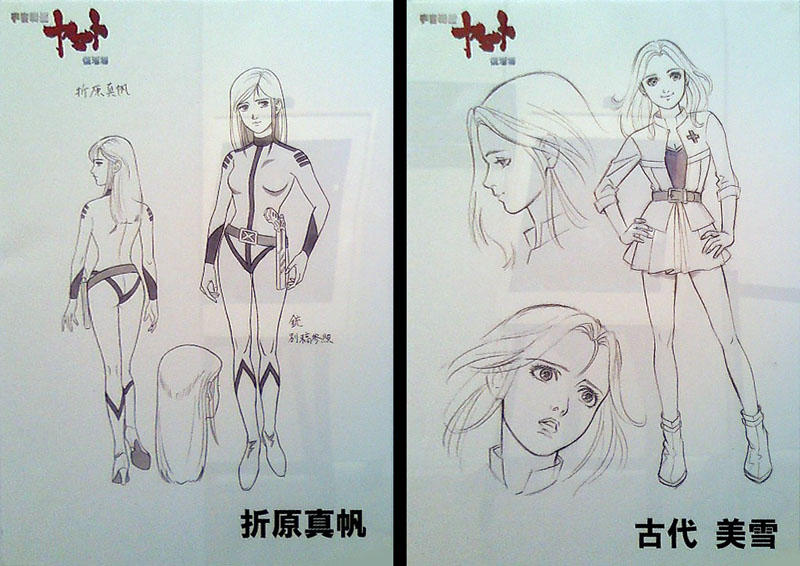 Finally, I was able to see some model sheets. It was mentioned in the official website that Kodai, Maho Orihara, and the Cosmo Pulsar Corps all wear old-style uniforms, and the other crewmembers wear a new one. 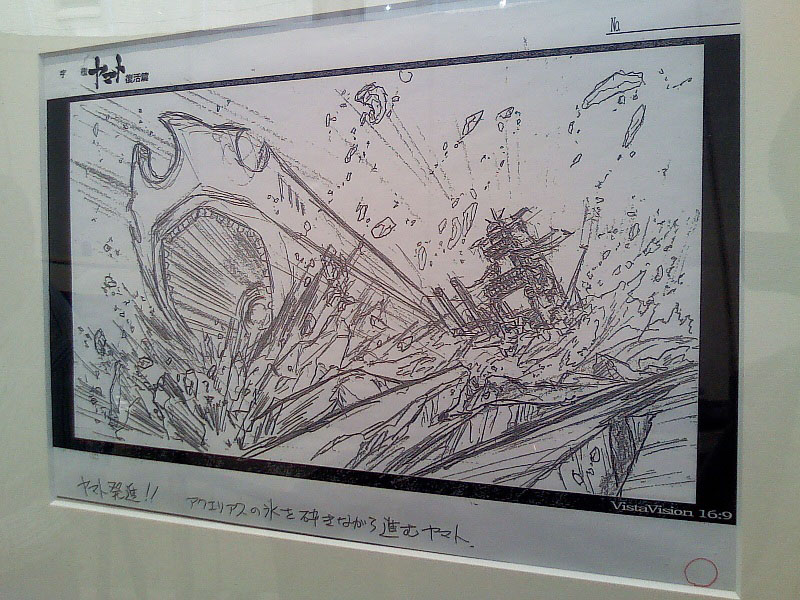 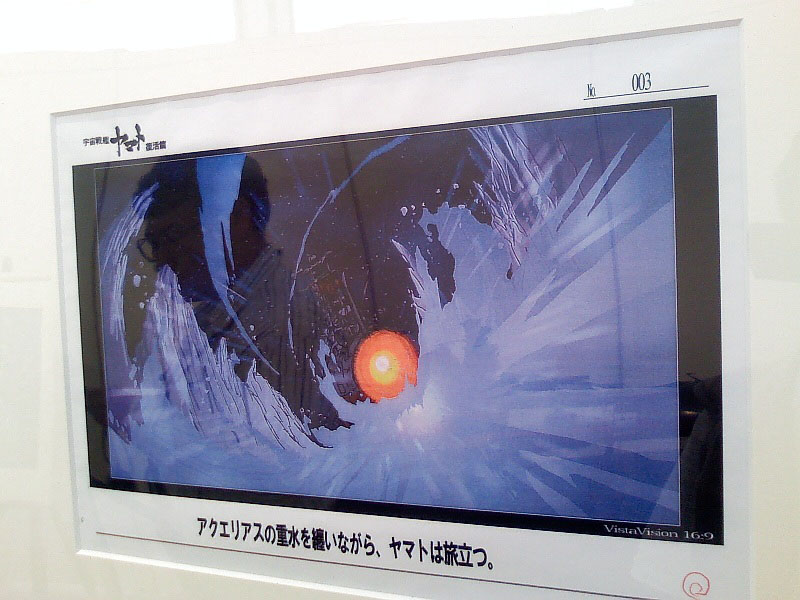 Are these storyboards or animation layouts? Because I already saw the launch scene in the Yamato Resurrection Promotional DVD, this wasn’t new to me, but it still got me considerably fired up. 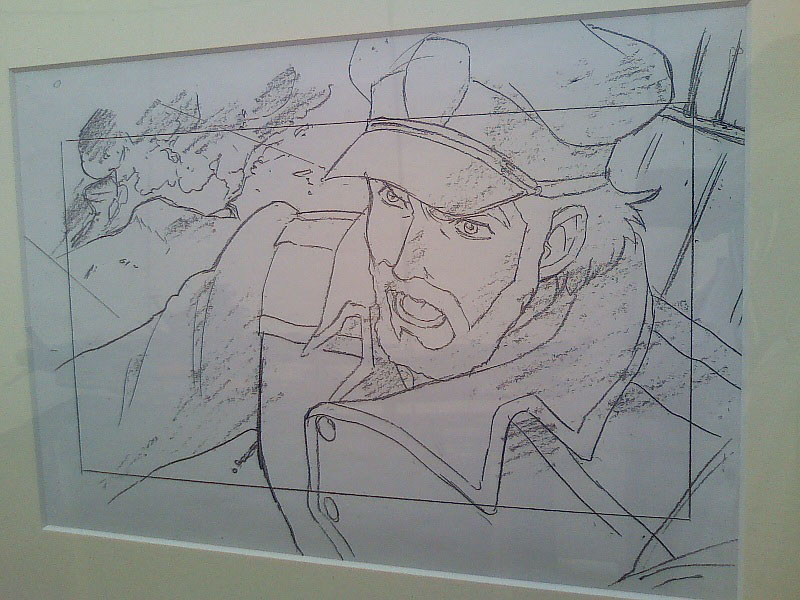 Kodai grew a beard. This wasn’t seen in the trailer on the Promotional DVD. 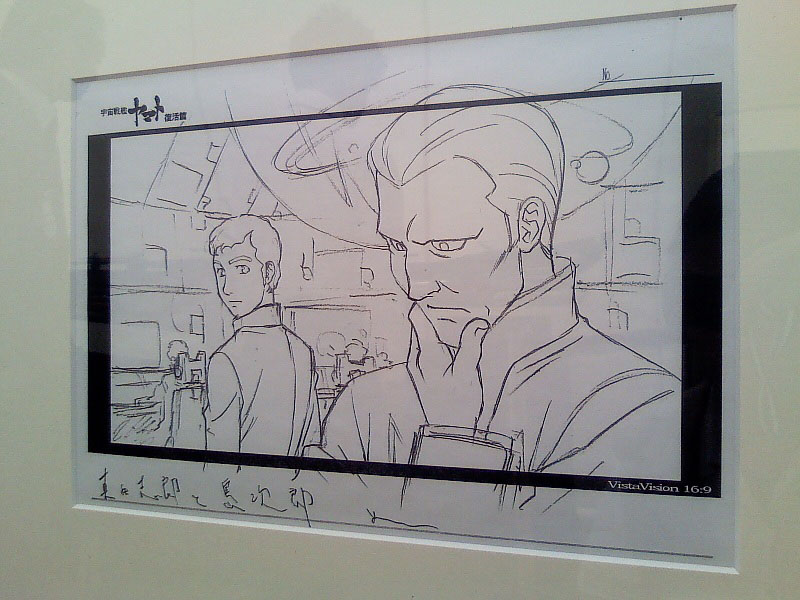 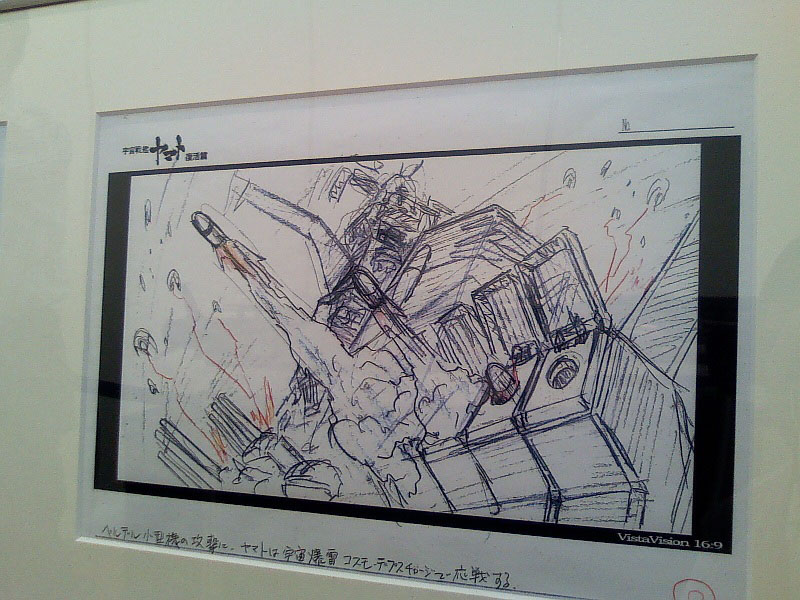 When I built model kits of Yamato in the old days, it was a mystery to me what the launcher for the space depth charges looked like close up. 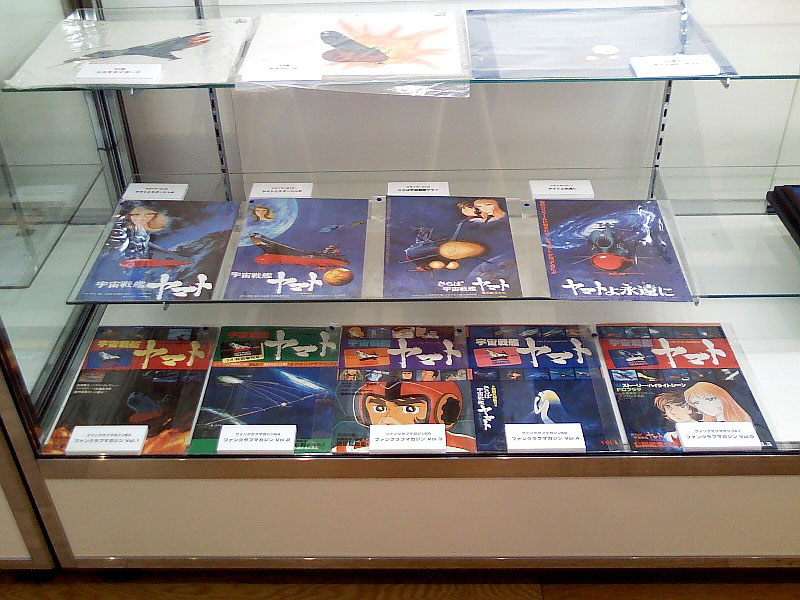 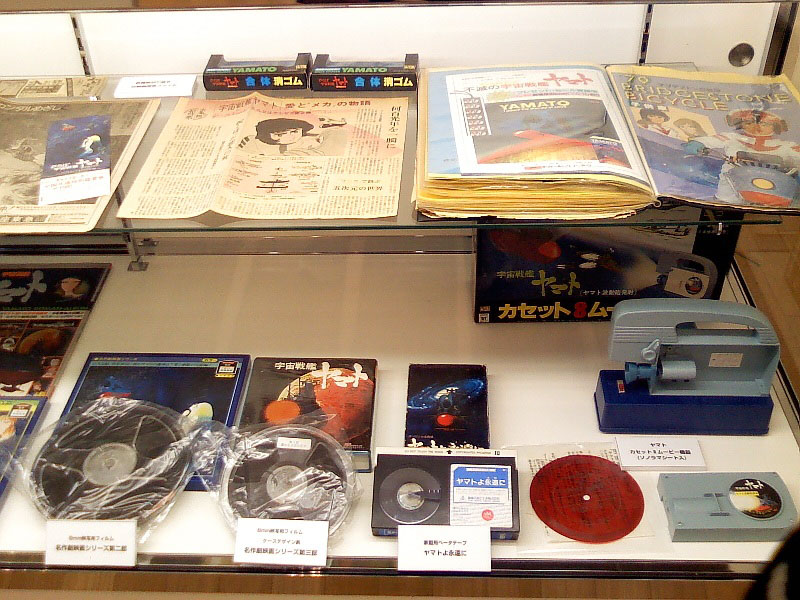 The upper level of this showcase included newspaper clippings and product flyers (records, bicycle, etc.). The lower level had the cassette movie projector, Beta videotape, and 8mm film reels, now all dead formats. Too bad they didn’t include VHD’s. Some of the Roadshow mooks were also shown. 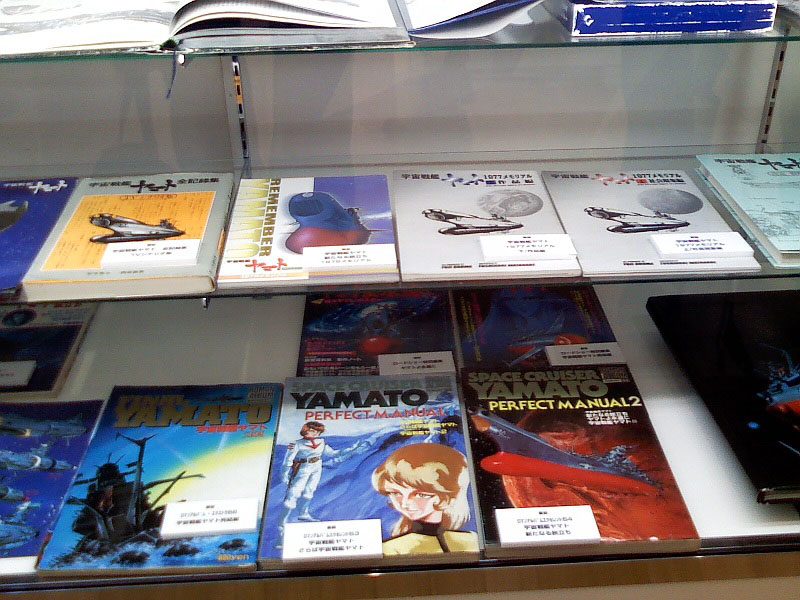 This case had the Roman Album book series from Tokuma Shoten. For some reason, some doujinshi (fanzines) were also included. Some plastic models were shown, but these were not new to me since they have appeared before at Yamato Party. 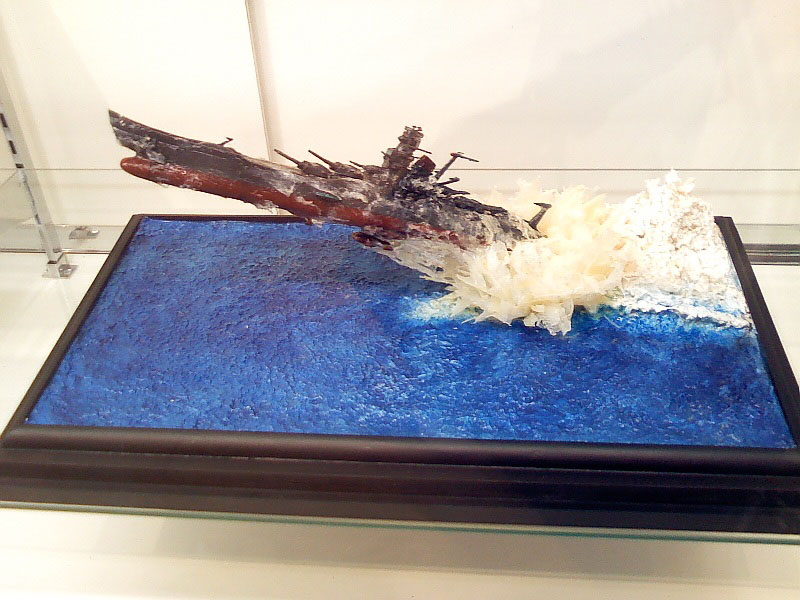 This diorama was the only one I was seeing for the first time. Because this sort of thing isn’t seen very often, it was quite fresh. This was the feeling I got from the whole exhibition. You might be disappointed if you try to overdo it, but as a brief stop it was very enjoyable. I was satisfied by just being able to see the new 5-meter long Yamato model.