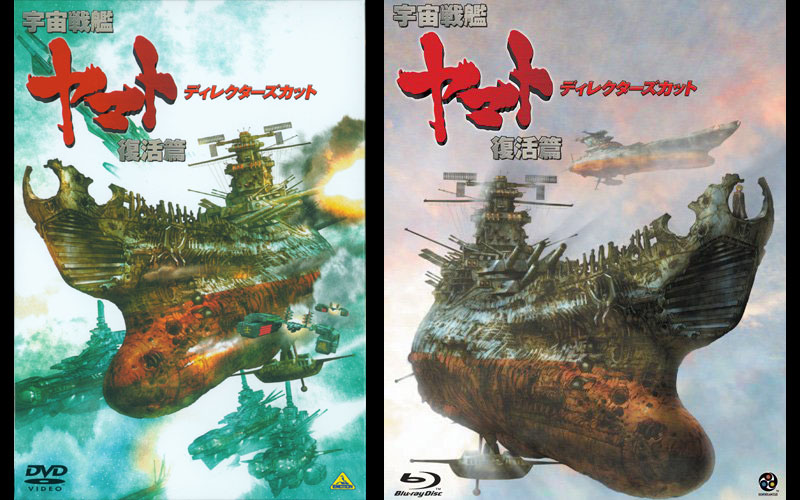 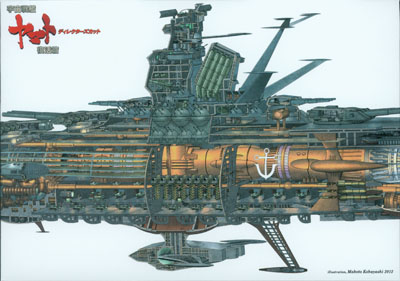 As promised, the Director’s Cut arrived on DVD and Blu-ray March 23, 2012 and started the next phase of the Resurrection. It has been made clear that the staff at Enagio Studio wants to continue the trilogy as originally intended by Yoshinobu Nishizaki, and the success of the first film is the key to moving forward with the second. To help encourage everyone to lend their support, here is a comprehensive look at what the Director’s Cut actually is.

First, let’s cover the release formats. Both editions come packaged in a slipcase; the front jacket art is shown above, which makes use of the two paintings that were sold as posters during the film’s single week in theaters. The back is shown at right, part of an intricate cutaway painting by Makoto Kobayashi that appeared in the Resurrection 2012 Art Calendar. 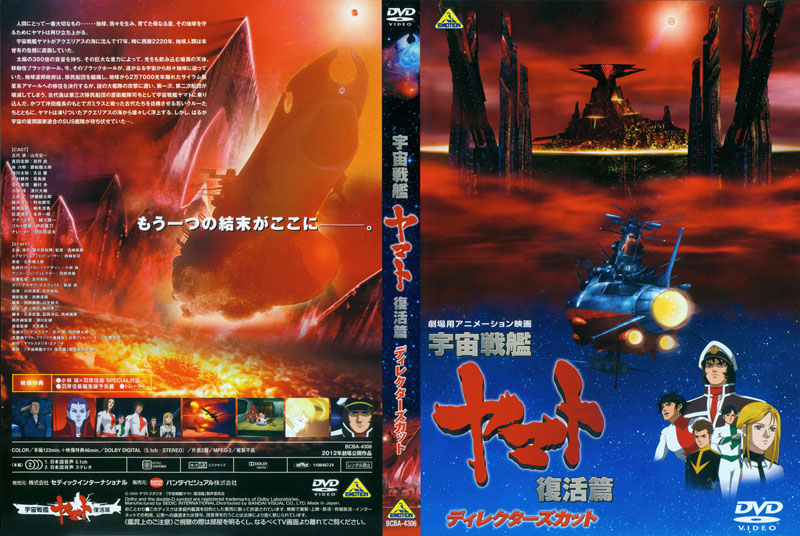 Different art is featured on the inner sleeve (above), a montage image that served as a one-sheet for the 2009 release of the film. The running time of the Director’s Cut is 123 minutes, 11 minutes shorter than the original. Most of that time was gained from the alternate ending, but various other parts of the film were tightened up in the editing room.

Both editions can be purchased from online vendors that serve overseas customers; the easiest to work with are CD Japan and Amazon Japan. In addition, there is also a limited edition of the Director’s Cut (again, in both formats) sold exclusively through the Yamato Crew website. In this case, a native Japanese speaker will need to place the order on your behalf. (In other words, you’ll need a friend to do you a favor.) The limited edition takes the discs described above and puts it into a larger slipcase along with a “Difference Book” which examines all the film’s changes scene by scene.

Another nice feature of the limited edition is that it’s big enough to accommodate a second disc–so if you already bought the 2009 edition, you can store them together. When ordering any disc from Japan, keep in mind the DVDs are region 2; you’ll need a multi-region DVD player to use them. Blu-rays, on the other hand, are fully compatible with US hardware.

Extra features are pretty basic. There is a 40-minute onscreen conversation between Animation Director Nobuyoshi Habara and Deputy Director Makoto Kobayashi. Of course, it’s not subtitled (neither is the movie itself, for that matter), so this is of limited interest to non-Japanese speakers, but it’s interesting to note that it’s essentially an audio commentary in which the two watch a highlight reel and discuss the details of specific scenes.

The other extras include trailers for Yamato 2199 and the Director’s Cut, and also a 4.5 minute promotional video that was released online prior to the movie premiere. Its purpose was to demonstrate the changes made to the soundtrack, in both music and sound effects. This is something viewers simply have to experience for themselves, since it’s hard to describe how satisfying it is to have all the classic sounds wash over you while newly-arranged Miyagawa and Haneda scores lift your heart into the heavens. The classical soundtrack that was engineered for the 2009 movie was an interesting experiment, but the pure Yamato sound brings an authenticity that speaks for itself.

A soundtrack album has not yet been announced, but will almost certainly appear at some point. In the meantime, the music provides one more reason to go back and watch the film again. 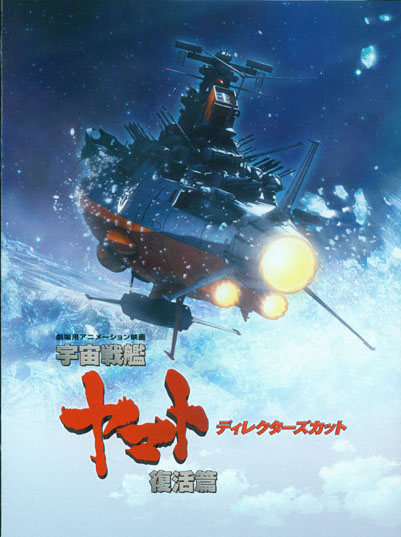 The last item included in the package is an essay by anime commentator and noted Yamato expert Ryusuke Hikawa. It introduces the film and beautifully sums up its impact on longtime fans.

Without question, Space Battleship Yamato by Producer Yoshinobu Nishizaki gave birth to an era of innovation, and was “a movie demanded by the times.” In the past, Yamato inspired strong feelings. The Space Battleship Yamato Resurrection Director’s Cut (hereafter referred to as DC) accidentally became a “posthumous work,” and it seems to have become a fateful one which retained that meaning.

For Resurrection, Nishizaki was not only the producer, but also spearheaded the production as a director. Work on the DC version began immediately after the film opened to the public in 2009, and specific instructions were issued on the spot. But, regrettably, Director Nishizaki met with an accidental death on November 7, 2010. Makoto Koboyashi (mecha designer of the film) and Nobuyoshi Habara (mechanic director) took on the role of deputy directors to inherited and complete the will of the deceased.

It has been a tradition in the Yamato series since Part 1 to produce alternate versions; one exists for almost every work. The goal has always been to aim for something better, reflecting the will to make a film that the audience can enjoy more. The passion to push each work to be its best has not changed, even with the Resurrection DC. But after seeing it, my impression was that “this time is special.” Feelings of pure mourning overlap with a sense of drifting transparency, particularly in the closing sequence. As a fan from the beginning, it became an exquisite feeling of loneliness mingled with passion. If I dared to translate it into a message, it might be “There is value in a journey, simply for its completion.” 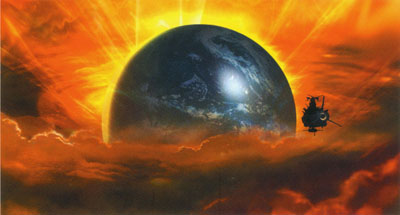 Originally, two endings were prepared for the film’s 2009 release. Both were presented in a preview event for fans and the media at the Tokyo International Forum before the December 12 premiere. To reflect their opinion, the “Earth survives” version was released. Therefore, I expected that the main purpose of the DC was to show the other ending, the “Earth disappears” version. However, many more changes were made, and my impression of the movie changed suddenly to a strong sense of surprise.

Certain connections, such as the depiction of the Black Tiger uniform, strengthened Kodai’s relationship with his crew and helped me to sympathize with the good old days. Revisions by [Animation Director] Tomonori Kogawa after the original version greatly contributed to the emotional reinforcement. Usually a DC is longer than the original, so I was surprised that this one became shorter. Above all, I was glad to hear the familiar sound effects created by Mitsuru Kashiwabara. Although the work of [sound designer] Shizuo Kurahashi on the release print was very sincere, by connecting the world of sound to the past, an unbroken line of continuity was created from part 1 to Resurrection. 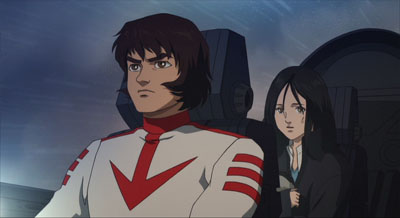 By connecting this “flow,” Kodai’s searing loss of his dear wife Yuki gains a stronger gut feeling, along with the gulf and restoration of his relationship with his daughter Miyuki. Neither the story nor the images are greatly changed, and the change of sound effects doesn’t have a direct infuence because they are mainly evident in the battle scenes, but I was reminded once again how the “magic of sound” can affect a mood.

This state of mind, along with the disappearance of Kodai’s wife and the Earth, enhanced my feeling of expectation for “the next voyage of Yamato.” To be honest, the title card “End of Part 1” in the original release gave me a wry smile, but I had a rather solemn feeling about the intent to continue from the DC version. After appreciating all the things that were changed, this was the biggest surprise. It reminded me that a movie is a thing of mysterious possibility. Therefore, it may be that Yoshinobu Nishizaki was a film director to the last.

Incidentally, while watching the “disappearance version,” I recalled my interview with Nishizaki for the 2009 theatrical program book. It was our first reunion after 30 years, and I couldn’t help feeling anxiety about something that he mentioneded. His intention behind presenting a crisis of Earth’s extinction by a moving black hole was “to make a point about the attitude of today’s society toward the Earth that they stand on.” (My summary.) 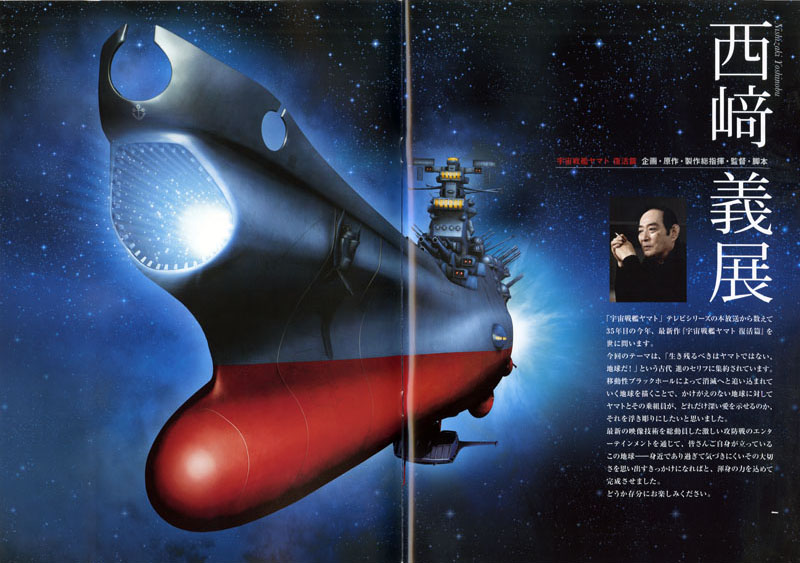 “Do not doubt the possibility that what exists now can be easily lost.” It was about the tendency of modern people to lack imagination, and even if I do not entirely agree with it, I can’t deny that part of it seems stronger every day. For me, though World War II has become isolated in the past, my grandfather died in the battlefield long before I was conscious of being born, and thus the feelings I live with can never be disassociated with the war. 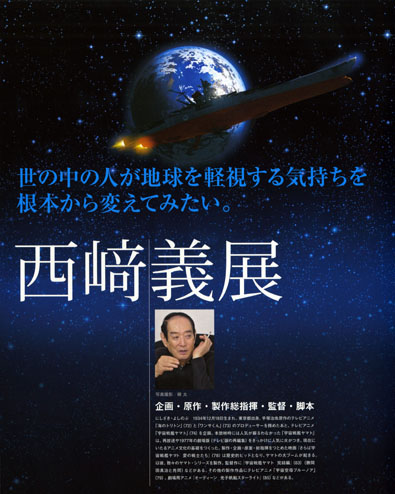 At the time I interviewed Mr. Nishizaki, I secretly held sympathy for him in my heart because I would not be in such a situation if not for Yamato and my association with anime culture.

In the business scene of Japanese anime, including Space Battleship Yamato in 1974, it was common sense to break beyond a single generation and target the rising youth generation. Many parts of the prosperous anime culture in Japan were the result of Yamato taking the first step, including the late-night anime that is currently thriving. However, the mood that says “it’s natural to have anime” and “I don’t know that old Yamato” has also increased. Like my attitude toward World War II, as mentioned previously, it doesn’t particularly matter if you know the history and past of anime. Surely there is no direct relation.

But the sense of impending crisis that I conceal in my heart sincerely tells me that “if the foundation of anime is lost, a reversion to the time before Yamato is always possible.” Although misunderstanding is never good, I’m not talking about Yamato and Resurrection with the narrow intention of supporting Producer Yoshinobu Nishizaki. “Although there is always desperation, there is also hope to aim for a higher plane.” That is part of the message we received in 1974, which I want to pass along for you to inherit. Of course, since the anime culture prospered with much effort, it should not be lost. With that feeling, I spend my days working to find what I can do.

That feeling, where in the last scene of this Director’s Cut we see a now-adult Kodai, indescribable expressions overlapping his face, it made my heart pound.

After the death of Director Nishizaki, the great earthquake of East Japan occurred on March 11, 2011 and caused an accident at the Fukushima Nuclear power plant there, an act of harsh reality. An important thing suddenly collapsed from beneath our feet and it was possible, after all, for all to have been lost. Even so, despair cannot stop us. Belief in possibility can accomplish much. Faced with the destruction of all mankind, that was the meaning behind Kodai’s actions. In that way, from within the isolation of a loss linked to reality that gnaws at him, there simultaneously simmers a feeling of, “We can’t let this go on! We have to do something!” And the willingness to take action wells up.

I mentioned at the beginning “a movie demanded by the times,” and such is its meaning. When I think of the weight of the dead, I don’t want to call it foreknowledge, but “Man himself was a miracle that came out of many reversals” was certainly the last message of Yoshinobu Nishizaki. While savoring the meaning of what I received through a series of flows from 1974, I wish to cherish it and continue to act upon it in the future. 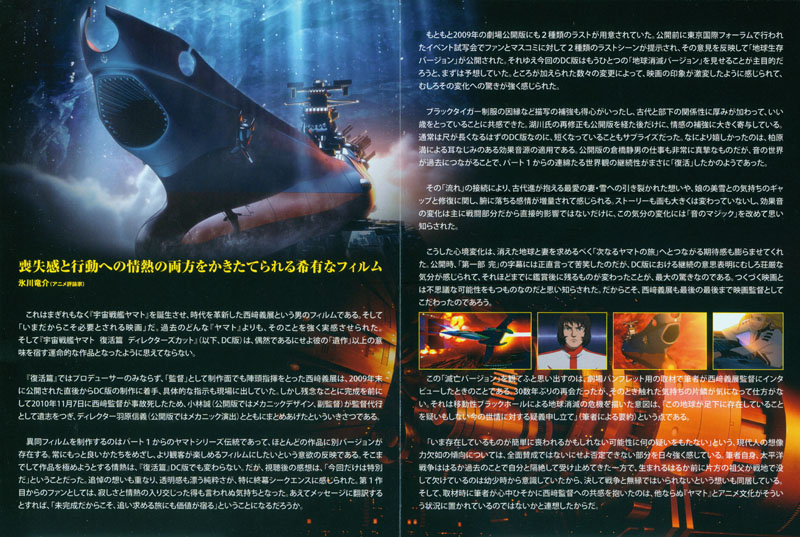 Now that we’ve covered the packaging, let’s dig into the movie itself and see what exactly makes it a Director’s Cut. For starters, what about that running length? Most films in the DC category end up longer due to added scenes. Again, the bulk of the time comes from the alternate ending, but we’ll start from the top and build up to that.

SPOILER WARNING: if you don’t want to know what happens until you’ve seen the film for yourself, stop reading here. If you want to dig in now, Click here