Desslok is enjoying “one of the pleasures no longer possible on Earth,” a nice natural spring bath. An aide arrives to announce that General Lysis has arrived from the Advanced Front Lines. We can assume from this comment that Gamilon is involved with other military campaigns that don’t involve Earth.

Story note: a truly strange moment happens just before Desslok is interrupted. He lifts his hand out of the pool to stare at what looks to be a glittering gold nugget. Either he’s incredibly lucky or he produced it himself. Speculate on this as you will…

We’re introduced to General Lysis, a man of such importance that, like Desslok, he has his own chant. (“LY-sis Lysis-Lysis, LY-sis Lysis-Lysis.”) Lysis requests permission to hunt down the Star Force. Desslok agrees.

Production notes: General Lysis was initially meant to appear with the other Gamilon officers at the beginning of episode 11, but to boost his role as a formidable opponent, his debut was pushed to the start of this episode with a triumphant return from another campaign.

Wildstar and Conroy lead a Black Tiger recon patrol. Wildstar sights a Gamilon squadron. In a crudely-animated battle, the Gamilon fighters are quickly destroyed and/or driven off. Spotting a damaged fighter drifting helplessly, Wildstar orders Conroy to help snare it with “capture cables.” As they’re returning to the Argo with the enemy ship in tow, they see the pilot looking back at them. In Yamato, Kato (Conroy) is ready to kill him, but Kodai (Wildstar) is more interested in a live capture.

Production note: The first Japanese voice actor for Saburo Kato [Conroy] was Shunji Yamada, but another actor named Akira Kamiya took over the character in this episode. Kamiya went on to become one of the most popular voice actors in Japan, continuing his career through the turn of the century. His best-known roles include Roy Fokker of Macross, Kenshiro of Fist of the North Star, and Ryo Saeba of City Hunter. His popularity resulted in the creation of Kato’s brother for series 3 after Kato himself was killed in series 2, allowing Kamiya to stay in the cast.

Wildstar and Conroy anticipate returning to the Argo as heroes. Unfortunately for them, the Gamilon soldier gets most of the attention. A crowd has gathered as the pilot is wheeled from the hangar to the med bay in a medical pod. It must be laundry day for Doctor Sane; he’s wearing a Combat Group uniform instead of his medical togs.

After Wildstar and Conroy grab a quick meal from the food-o-mat conveyor belt, they head over to the Medical Bay and find the observation gallery packed. All of the bridge crew seem to be there (except Sandor, who’s examining the Gamilon plane). Eager even says that Avatar is running the ship solo for a while. Space Battleship Yamato has an interesting comment from Kato about Dr. Sado [Sane] actually being a veterinarian and asking whether he’s up to the job of examining an alien. Yuki (Nova) responds “But aren’t the Gamilus people beasts?”

All attention turns to the medical arena below when the prisoner is wheeled in. Dr. Sane removes the helmet. There are audible gasps as they all get their first unobstructed look at a Gamilon. They are amazed that he looks completely human, albeit with blue skin. IQ-9 reads off a bunch of stats which confirm that the pilot is, essentially, human.

I don’t know why this would be so much of a surprise after Nova and Derek came face to face with a Gamilon on Titan. Sure, he was covered up except for his (human looking) face, but they could see that he was very humanoid.

The show itself doesn’t mention it (nor does Yamato) but some of the Star Blazers comics and timelines claim that much of Earth’s pre-Iscandar space fleet tech was derived from reverse-engineering Gamilon wrecks. If that were the case, Earth should have been able to salvage bodies from the wrecks as well, or gleaned other information about what Gamilons look like. Is it possible that the EDF already knows what Gamilons are like and kept it a secret, even from the Star Force?

The discussion in the observation gallery turns to “how can someone so human do such inhumane things?” In particular, this is voiced by Conroy. I can only assume that Conroy was sleeping through history lessons where they covered things like WWII. You don’t have to be a blue man from outer space to commit atrocities. There is a bit of irony in Conroy voicing this opinion. He seemed rather bloodthirsty during the dogfight and had to be reined in by Wildstar. 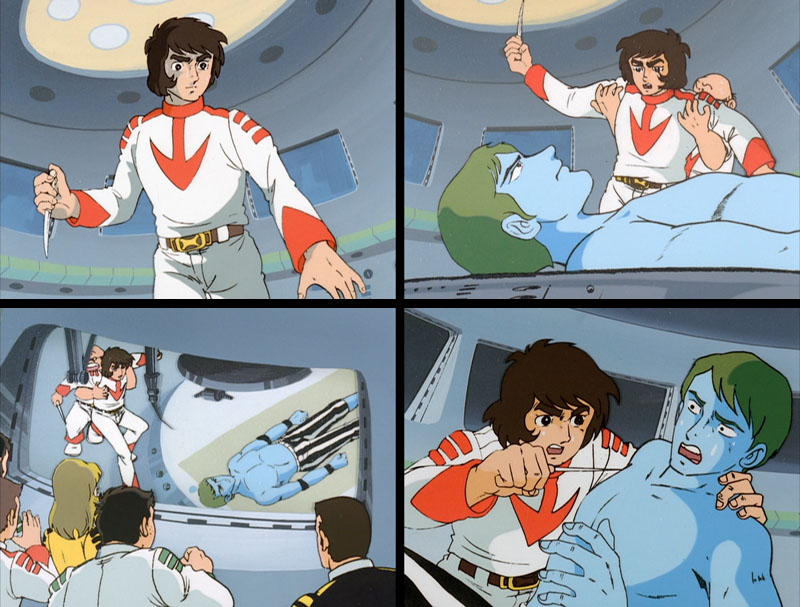 Seeing the Gamilon pilot sets a fire in Wildstar and he high-tails it down to the med bay. In Star Blazers, he approaches the pilot (who is now awake) and then we segue into the flashback. In Space Battleship Yamato, he picks up a scalpel. Dr. Sane tries to stop him, but Derek shrugs him off with little effort. He then thrusts the knife toward the prisoner’s chest and the scene freezes, giving way to a look back in time.

We transition to “Great Island” (aka Japan), 20 April 2192; specifically, a village near Yokohama on the Miura Peninsula, the western coast of Tokyo Bay. We see a brief view of the town in Yamato, then the majestic Mt. Fuji in the background (it’s actually a good 50 miles away in real life, but so what). An 11-year old Derek and his Mother are waiting for Derek’s big brother Alex to arrive on leave from the nearby space academy, where he is a cadet. Derek is happy when his brother arrives, until Alex points out Derek’s “freckles.” (It was pimples in Yamato. Mamoru was mean!)

Production note: Whereas Star Blazers‘ casting director Kit Carter chose a very able young actor to portray the young Wildstar, Yamato‘s Kei Tomiyama portrayed both the younger and older versions of Kodai by changing the pitch of his voice.

The Wildstar household has a little party to celebrate Alex’s homecoming. A few scenes of the party were deleted from Star Blazers, showing some singing, clapping and dancing. One particular male party-goer shakes his ample booty in time to the handclaps. Derek quietly slips away to sulk in his room and stare at his butterfly collection. His mother comes to ask him what’s wrong. Derek is upset that all this attention is lavished on Alex. Mrs. Wildstar lets Derek know that he’s being a selfish brat, although in a nice, motherly way.

That night, as Derek tries to sleep over his brother’s snoring, a planet bomb streaks through the sky. Its impact knocks Alex out of his bed and jars everyone awake. The first planet bomb has hit Japan. It is apparently a dud–it doesn’t explode. (It’s also a great deal larger than those we saw floating by the Argo in episode 7). Other bombs that hit Japan do explode. One hits “Great Island’s once inactive volcano,” aka Mt Fuji, and causes it to erupt. Alex receives a phone call from his commanding officer, ordering him back to base.

The bombing continues for weeks, not just in Japan, but all over the world. In a little over a year (by the summer of 2193), underground cities are constructed and readied for refugees. These underground cities are quite a feat of engineering. Huge caverns are excavated and literal cities, skyscrapers and all, are built within. In the meantime, the local communities pull together to help each other survive.

Derek goes to visit Alex at the nearby “Great Island Space Station” (aka EDF Kanto Region Base) to share lunch. Derek brings some fresh sushi from home (identified as “chocolate cake” in Star Blazers). Alex gives Derek a little recruitment talk, saying he’s almost old enough to join the military as a cadet, but Derek refuses. Unlike the 18-year old we’ve come to know, the pre-teen Derek doesn’t believe in fighting.

As Derek heads home on a train, in a scene cut from Star Blazers, he sees a hordes of people rush off his train and into the entrance for the underground cities. (Did they know an attack was imminent?) 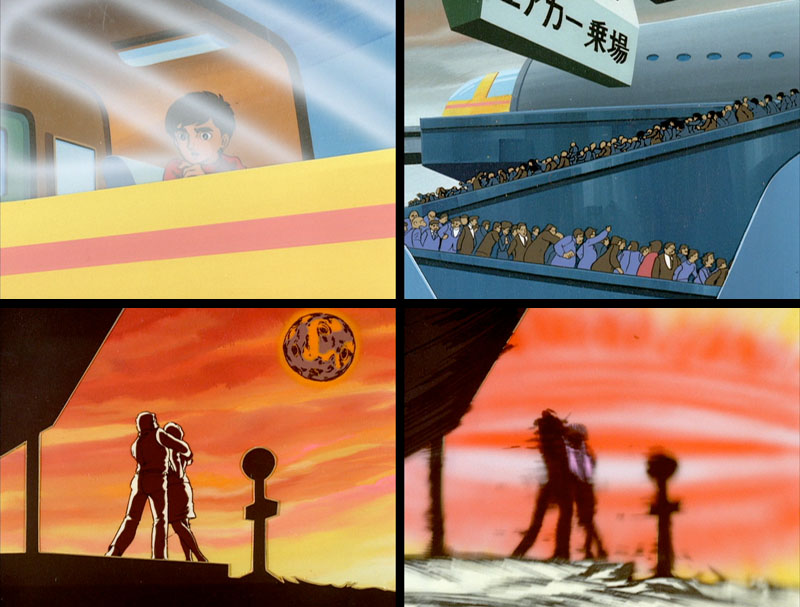 Meanwhile, Derek’s parents go to meet him at the bus station. They watch as one bus arrives and departs with no Derek in sight. They wait for the next one. Unfortunately, the next arrival at the station is a planet bomb. Star Blazers cuts to the explosion, but Yamato explicitly shows the bomb landing right on top of the Wildstars, vaporizing them. 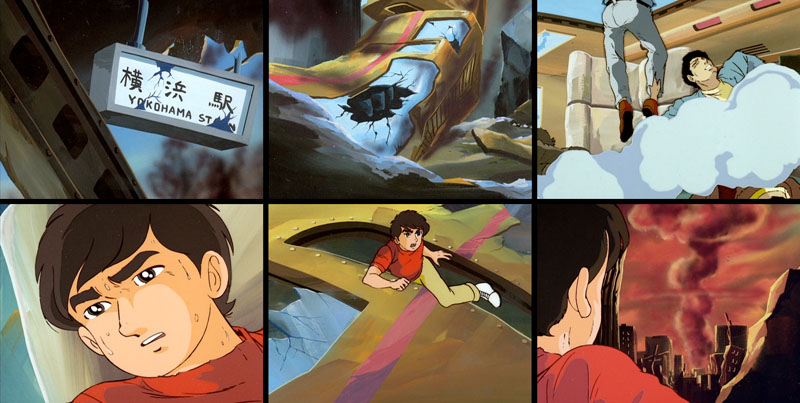 Derek’s train was derailed by the explosion. Yamato shows a bit more footage of passengers’ bodies lying all over the train, and a sign clearly marked “Yokohama Station.” Derek wakes up and crawls out of the train. He looks to where the bus station was. He slowly walks over, fearing what he’s going to find. All that’s left are some scraps of cloth from his mother’s dress, which mysteriously survived being near ground zero of a planet bomb explosion. Heat and radiation don’t seem to be a concern to the young boy, either. End of flashback.

In Yamato, when we last left the Medical Bay, Derek was seconds away from performing an impromptu tracheotomy on the prisoner. Everyone manages to restrain him. Venture tries to calm him down.

Production note: In the original script for this episode, Shima [Venture] explained to Kodai [Wildstar] that specific rules had to be followed in the handling of captives and there were penalties for assaulting them. The dialogue was deleted when it became obvious that no intergalactic Geneva Convention existed, so these rules would have been limited to the Earth Defense Forces.

Star Blazers: Derek shouts “I don’t care! Let’s fight like men, you Gamilon!!” and follows up with a flurry of desperate, emotional punches.

Yamato: Kodai gives up and drops the scalpel. The Gamilas prisoner grabs it off the floor, and with a cry of “Soto banzai!” he prepares to kill himself. (“Soto banzai” is roughly translated as “Long Live the Leader.”) Derek knocks the knife out of his hands and kicks it out of reach. Then come the punches. Instead of wanting to “fight like men,” Kodai berates him for not valuing life.

In both versions, Derek stops when he sees the Gamilon’s tears, which match his own. In that moment, he realizes that the similarities are not just skin deep.

The pilot is interrogated but no information is gained from him. In Yamato, it’s stated that the low ranking pilot didn’t know anything about the “true Gamilas,” with no further explanation. In Star Blazers, the narration informs us that Gamilons actually have their minds erased of knowledge about Gamilon during their mission, which is restored upon their return. The interrogation sequences aren’t shown in detail. We see Avatar in the lab with the pilot, then we see the pilot strapped into a chair with a helmet on his head, while Sandor stands nearby holding a remote control device.

Looking at that last scene, I wonder if it’s the same kind of shock/torture device used on a Comet Empire prisoner in Series 2. Since the interrogation was handled through still frames and narration, I can’t help feeling that there was more to it, that perhaps these were intended to be fully rendered and scripted scenes, but they just didn’t have time. It could be why they basically redid this episode in the Comet Empire.

Having learned nothing, and with food supplies limited, Avatar orders the prisoner released. As the pilot gets into his now-repaired ship, Wildstar hands him a small bag of food, as ordered by Avatar. The pilot soon returns to his base and the Argo flies on, its crew a little wiser.