This is the heaviest stage of the game with multiple events that pile up at breakneck speed and proceed through several environments all the way to Emperor Lugal’s inner sanctum. It begins with a scene from the movie; Uruk’s shield generators power up and Yamato punches through toward the city.

As you charge forward in a long dive, you must shoot down incoming enemy fire from your station on the bridge. As before, this is done by moving a cursor and firing. These graphics were overlayed onto the animation shown above left. After this, Yamato crash-lands and the Cosmo Tigers launch to begin the next phase of the attack.

Gameplay shifts to a first-person view inside the cockpit. You are hurtling through the maze of the Uruk city, in which quick moves are necessary to dodge irregular structures.

If you’re not quick enough, your fighter will smash into the buildings. Othrwise, you climb up out of the first maze and back down into another.

You now have to dodge different terrain and fire at Denguil fighters that show up to make things harder.

The next stage is an open plain, but now you have to get past herds of robo-horses that are powerful enough to shoot you down with a single blast.

After this, you shift back to Kodai in the Cosmo Zero. Your target is the control tower for the warp generator. You fly around it, firing steadily until you either knock it out or make a wrong move and crash into it. Once you take it out, Emperor Lugal ducks into his temple to activate Plan B.

The fighters land and the pilots jump out to continue their mission on foot with an invasion of the temple. It’s not as simple as it was in the movie; plenty of obstacles lie between you and the Emperor. They come up in random order, and though some might not come up at all, any combination of these events can stop you in your tracks. In all cases, there is some kind of visual cue (often a flash of light) to prompt you to keep moving in one direction or another.

The first obstacle is a rapidly opening and closing door that can crush you if you don’t leap through it with precise timing.

Next is a water-wheel-like contraption suspended over a deep chasm. You have to leap onto it and then the ledge above. One wrong move sends you plummeting into darkness.

The throne room is next, and lots of guards are waiting to gun you down if you don’t dash through it with your head down.

If you survive that, your next task is to guide the invasion force through a corridor maze. Four doors to choose from, three of which are booby-trapped with electric shocks.

It gets worse. Now you have to cross a thin cable hanging over a moat of fire. Precise movements side to side keep your guy from losing his balance. Get it wrong and you’re a crispy critter.

Kodai is now on his own, but he’s nowhere near the end of the road yet. First he has to wait until one of three doors open…

…and get a move on before being crushed by the door.

More guards await in the next corridor, ready to shoot it out with you.

Now you have to hop across metal spheres in a river. Don’t wait too long to jump…

…because when they flash they’re about to explode!

Almost there. The next step is to leap onto a rotating bridge, one of a series.

If you pick the wrong one, it collapses under you and you’ll join the others who fell to oblivion.

Finally, the Emperor’s inner sanctum. If you can outdraw and disarm him, you win…

…but he’s no amateur in a shooting match!

Even if you successfully navigate all that and take out Lugal’s pistol, Aquarius still gets warped to Earth and he still launches in the Pre-Noah to escape the disintegration of Uruk. The story’s not over, after all.

Aquarius is now bearing down on Earth and Yamato warps in to stop it.

Ahead of Aquarius is the Pre-Noah and the remnants of the Denguil fleet. The smaller ships fly at Yamato one by one, and any who get past your guns pick away at you with laser fire.

While this is going on, Aquarius itself becomes an attacker, releasing huge masses of water. Both the enemy ships and the water globs must be hit from your vantage point on the bridge. If you miss the water globs, the ship gets swamped and takes heavy damage.

Finally, the Pre-Noah itself gets in your way as you count down to fire the Wave-Motion Gun. If the ship has enough armor left, you’ll survive long enough to build up energy and let it go at the right moment.

If you make it, you’ll take out Lugal and break the floodwaters in a single shot.

When this stage is cleared, Yamato returns safely to Earth without self-destructing. The game ends and goes to staff credits. The controversial Final Yamato love scene epilogue is nowhere to be seen.

And now for some very welcome news. In the time since this article was originally posted, the footage for the game finally surfaced again and found its way to Youtube. It can now be viewed in full at these links:

(I probably should have changed the opening sentences of this article to reflect the news, but then you wouldn’t be nearly as delighted right now, would you? – Editor)

One other source of documentation for this game also survived the 1980s. Issue 47 of the Yamato Fan Club magazine published a short feature on the game that included some insight on its production. Here it is, translated to English for the first time anywhere… 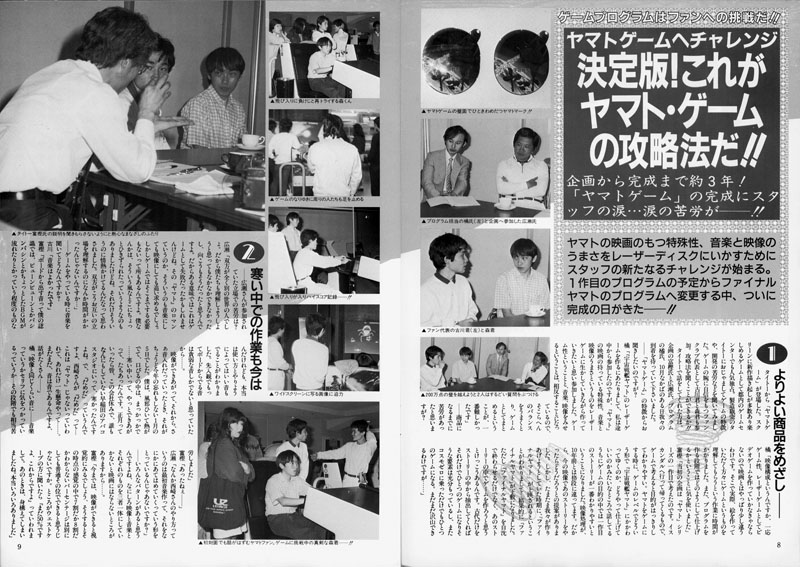 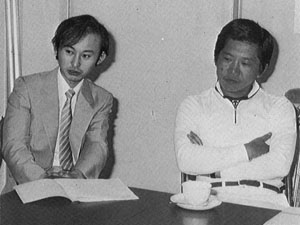 Aiming for a Better Product

A Yamato game has appeared from Taito, the company with the largest and most popular game center in Tokyo. Taito will manufacture and sell the game, and we wanted to hear about their development efforts. We met in October (1984) with Taito’s planners, Mr. Tachibana and Mr. Togashi, and the programmer Mr. Hirose.

Interviewer: I’d like to hear the characteristics of the Yamato game.

Tachibana: I wanted to participate in the making of a lasergame that best used the distinctive look and music of Space Battleship Yamato. The difficult part in making a good game is finding the best balance between music and images.

Interviewer: Did you have a tough time with this product?

Tachibana: Because it’s necessary to make it playable as a lasergame, it’s a little different from the movie. It takes time for the people involved to understand what the game actually is. Also, I worried a lot about creating the finished program.

Togashi: The original plan was to base it on the first Yamato series. The purpose becomes clear when you think of the game as a voyage to Iscandar and back. In our planning, the first concern was how to fight through the different levels and the second goal was to create a meaningful story.

Image processing is very different today than it was ten years ago, so we wondered if we should develop a different proposal. But by chance Final Yamato came out just at the time we were thinking about it, so that became our scenario. There is plenty of material in that story to make into a fine game. Even if we just extracted Kodai and the Cosmo Zero for our premise, there would still be plenty to work with. 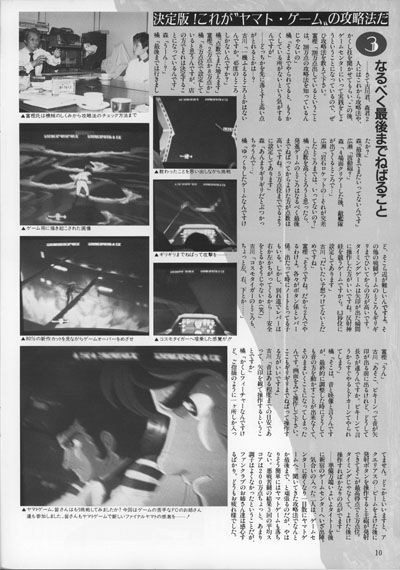 Interviewer: What was the hardest part from the programming standpoint?

Hirose: The two sides of the project are completely different worlds. It’s difficult just to understand each others’ questions. The intention was to capture the romance of Yamato with video and music, but a game doesn’t really have a place for that. They had to drag me through it, and it took a long time for us to understand each others’ viewpoints.

Interviewer: How was it to hear the music in the game?

Togashi: I had thought arcade game sounds were inferior, just zip, zap, zoom, or some cheap music. I understood that we can put better sound in depending on how we use it, but my preconceived notion was that videogames naturally can’t play good sound.

The animation was completed and we began the sound recording. I clearly remember it was January 5th of this year. I had a fever and a sore throat so that the inside of my mouth turned red. It was a cold day, but the work would be completed at last, so I attended the session. Usually our company would be out for the New Year’s holiday, but I went to Avaco Studio in Waseda (editor’s note: where the voice actors were recorded for the Yamato movies).

Mr. Nishizaki kept saying “no, no. This is not Yamato.” We did our best, but…

Tachibana: He put importance on the sound as well as pictures. He cares about the music and the dialogue. It was a very hard job, I remember that. I guess Mr. Nishizaki’s way is to make the music first and then mix other elements into it.

Interviewer: I think there are many patterns. I mean, making a movie is combining three different things–pictures, music, and sound–into one.

Togashi: Before this job…you know, when we had completed animation, we feel our work was maybe 70-80% finished. But a representative at West Cape told me, “we only have 50% now. We have to keep working.” I had to gatheer myself up when I heard that. There are many, many stories to tell in this job…

As one of Japan’s leading game manufacturers, Taito’s association with Yamato continued after LD games faded away in the mid 80s. Their 2000 Cosmowarrior Zero game for Sony Playstation had some Yamato elements, and they also began making Yamato toys that doubled as game prizes in 2007. 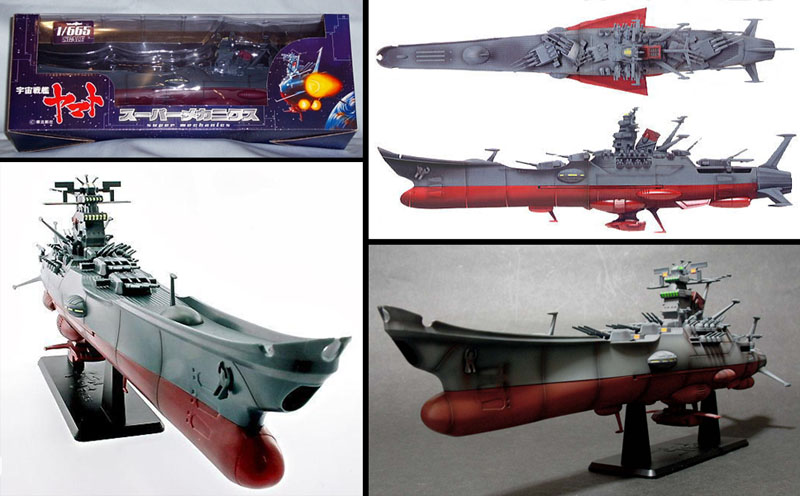 Stretching a full 12 inches from front to back, this is the biggest version of Wildstar’s fighter that has yet been made, and is a fine addition to any fan’s collection. Its lack of moving parts is no deficit, since it looks poised to leap off your shelf at any given moment.

This remake of the 2007 Yamato comes paired with a 1/1 scale Wave-Motion Gun trigger that lights up the ship’s prime weapon when pulled. As seen in the photo above, the trigger was bigger than the ship itself. 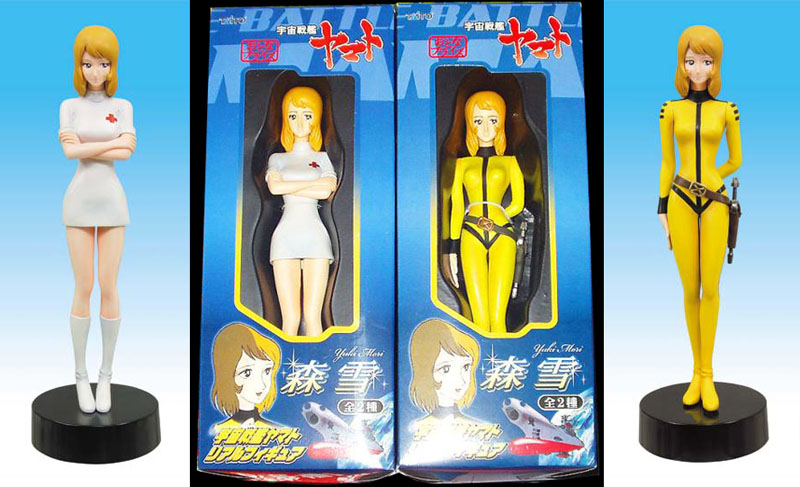 This twin pack offers up Yamato‘s sweetheart in uniforms for both of her stations.

Taito’s newest products tie into the 2009 release of the Yamato Resurrection feature film. They include a new version of the Super Mechanics Yamato, modified to match the ship’s redesign for the movie.

There is also this handsome pair of pocket watches. All these products and those that preceded them were first available only in crane-arm arcade games but later sold in stores and online.