Obviously, Yamato 2‘s greatest asset going into production was its enormous inheritance from Farewell to Yamato. Movie budgets (then and now) are much more generous than those for TV animation, which allowed for a very fertile development process. The results ranged from a well-constructed story to a huge archive of mecha and character design, much more than a typical TV anime budget could have afforded at the time. That said, Yamato 2 was still a very demanding production with all sorts of new elements to be created–or in some cases, transformed. 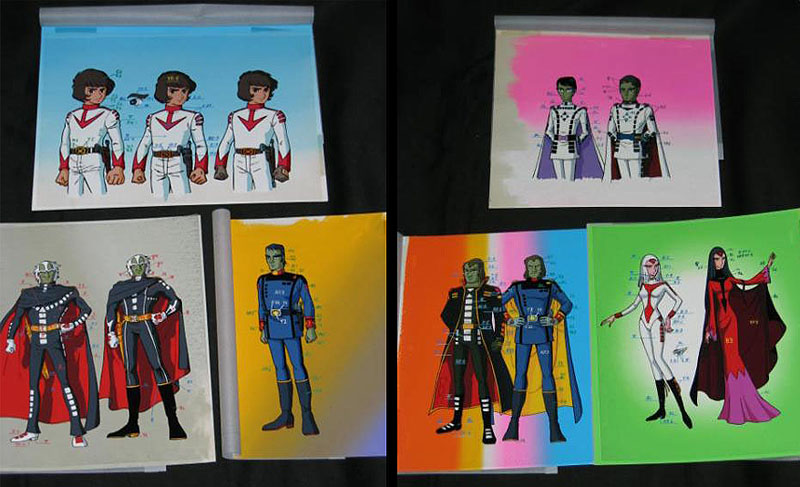 The character design supervisor on Farewell to Yamato was Tomonori Kogawa, who had come up through the ranks at Toei Animation on such projects as Science Ninja Team Gatchaman and had a long-running career ahead of him that would ultimately include Yamato Resurrection in 2009 (read our profile of Kogawa here). Academy’s new production studio opened shortly after Farewell‘s premiere in August 1978, but Kogawa was unavailable to shift over to Yamato 2. Instead, the position was filled by Kenzo Koizumi of Studio Mates. He came in as a Yamato veteran, having done his time as an animator on the first series. 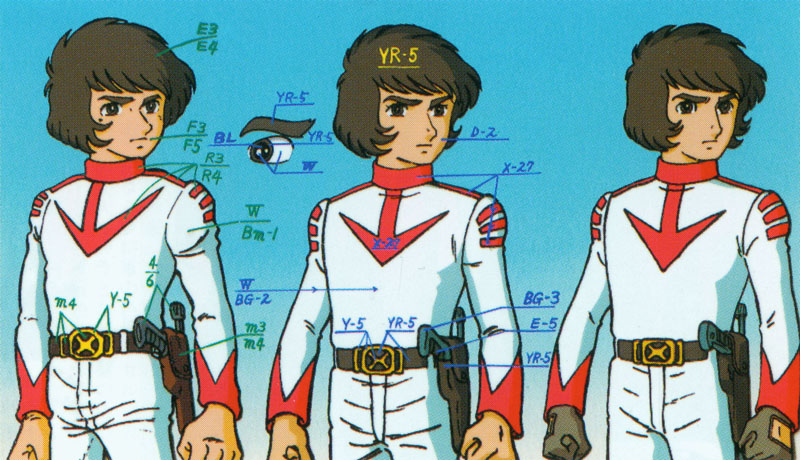 Above: design evolution for Susumu Kodai [Derek Wildstar] from Series 1 to Farewell to Series 2, which reflects the growth of the saga’s overall design sensibilities and the skills of the artists.

Kogawa’s new designs for the Yamato crew and the Earth-side characters were more than adequate for the new series, but Koizumi redesigned almost everyone on the enemy side. There was nothing inherently wrong with the movie designs, but their costumes were replete with insignia, too complex for the tight schedule of TV animation. Part of Koizumi’s assignment was to simplify them, and he took the opportunity to re-imagine the characters from head to toe. 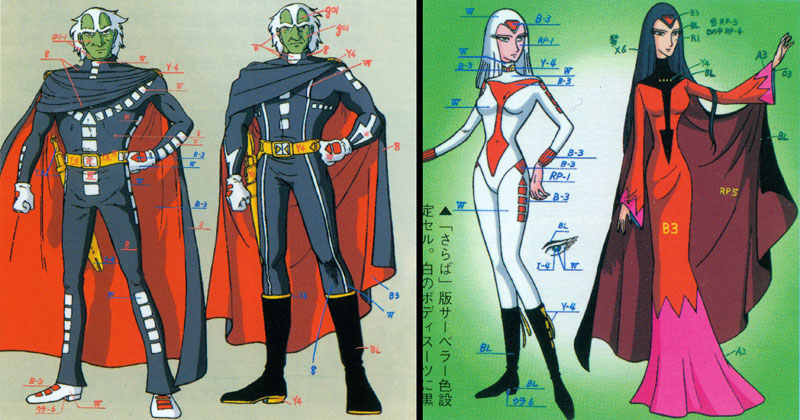 Emperor Zordar was revised to look older with a middle-aged face rather than the more youthful look in Farewell. His body was thickened and he was given a pair of heavy boots.

Zordar’s consort Sabera (known to Star Blazers fans as Princess Invidia) wore a skin-tight bodysuit in Farewell, but was made to look more mature and womanly in Yamato 2. Her long dress was designated in three colors, red, blue and purple, to reflect her moods. She also got a new voice actress for her TV appearance. 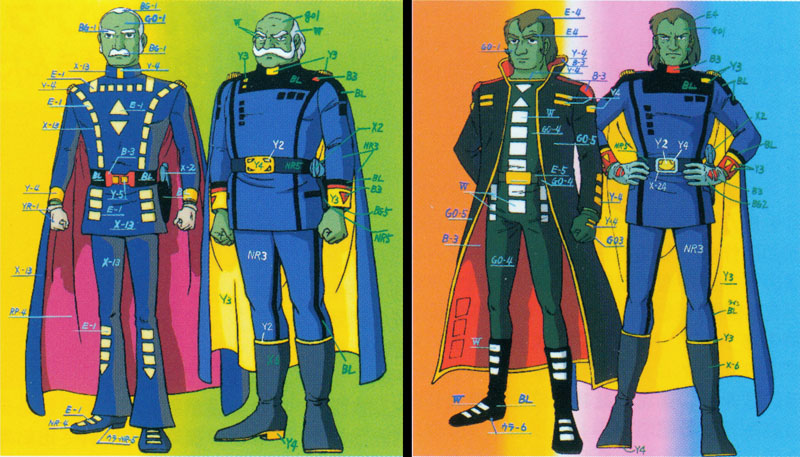 Fleet Commander Goenitz (General Dyar) was quite slim in the movie, so he was beefed up to have a larger command presence. His hairstyle was changed to give him a bald head and bigger moustache.

General Baruze (alternately referred to as Terpis or Bleak in Star Blazers) looked rather young in the movie, so he was made to look older and more commanding. His long jacket was transformed into the cape of a top-ranking Comet Empire officer. 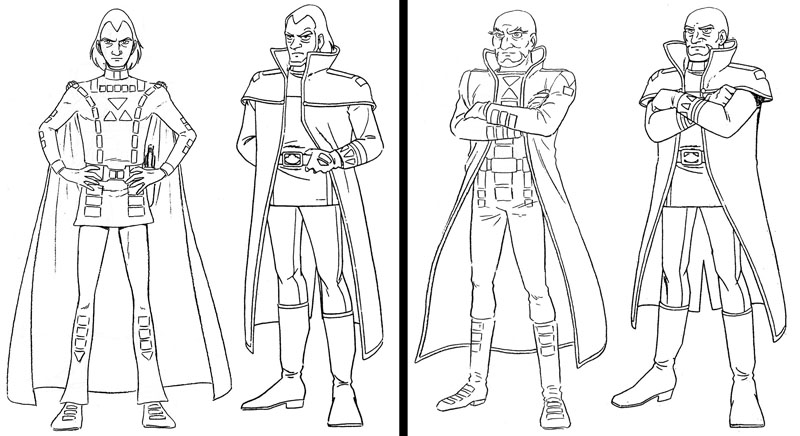 General Goland (Torbuk) looked basically the same from film to television, but his costume was altered to maintain consistency with all others. 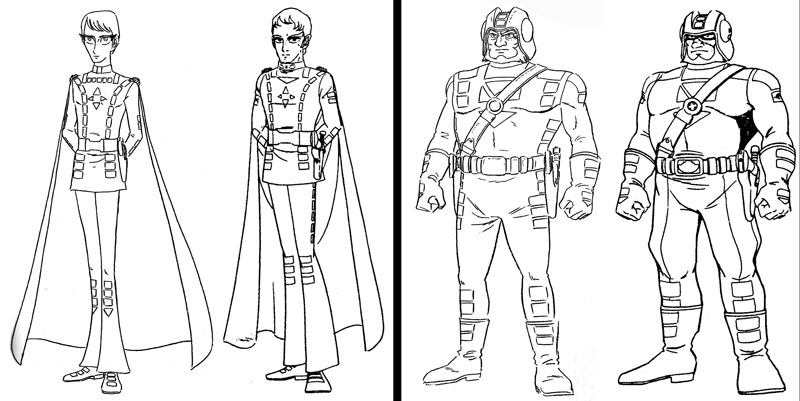 Miru (Morta) changed substantially. Though his body was still rail-thin, he was intentionally made to appear more masculine in order to stand up to Dessler.

General Zabaibal (Scorch) got some extra muscle and a nasty facial scar to give him a more dangerous look for the TV series. 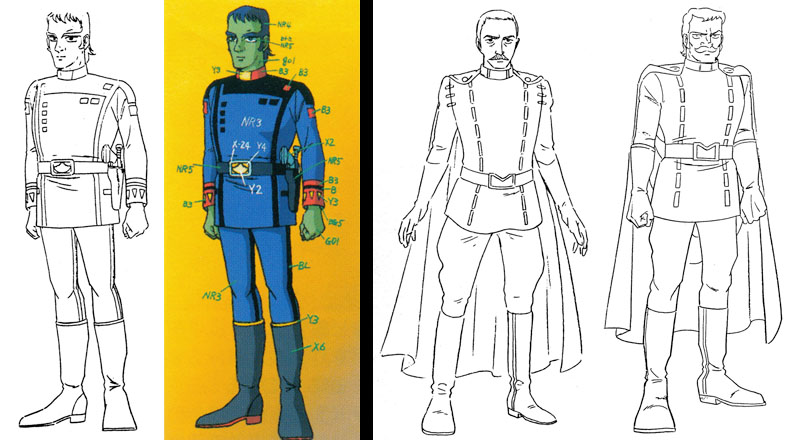 General Naska, who commanded the Comet Empire’s vanguard fleet, was newly-created for the series. Since he was not as high in rank as other officers, he was not given a cape.

General Talan of Gamilas started out as a gentleman-type in Series 1 and became a serious soldier in Yamato 2. His hair was darkened and his moustache was thickened to a Kaiser style. The basic Gamilas green was also darkened for the new series.

Several new Gamilas officers were created to fill out the ranks of Dessler’s surviving task force. They also each had names, though not all of them would be heard in the show.

4. Franken. No prominent role. The design was modified to become submarine commander Frakken in Series 3.

6. Bandebel. Owing to an editorial slip, this character was also named Garotte in Star Blazers. This is the officer who deploys the Star Flies in episode 11.

The original design for the supernatural space goddess Teresa was as simple as could be, but she was a bit too naked for TV. Thus, she was given a dark blue dress and her face was lengthened slightly. Leiji Matsumoto’s redesign is shown above center, followed by Koizumi’s cleanup. Her color ink lines and airbrushed glow were preserved, but simplified.

This Comet Empire vessel was newly created for Yamato 2, designed by Leiji Matsumoto and cleaned up by Katsumi Itabashi. His signature is to the right of the drawing’s date: January 12, 1979. Itabashi had been a studio mate of Matsumoto’s for many years (they still work closely together today) and brought to Yamato 2 a strong working knowledge of Matsumoto-style mecha. 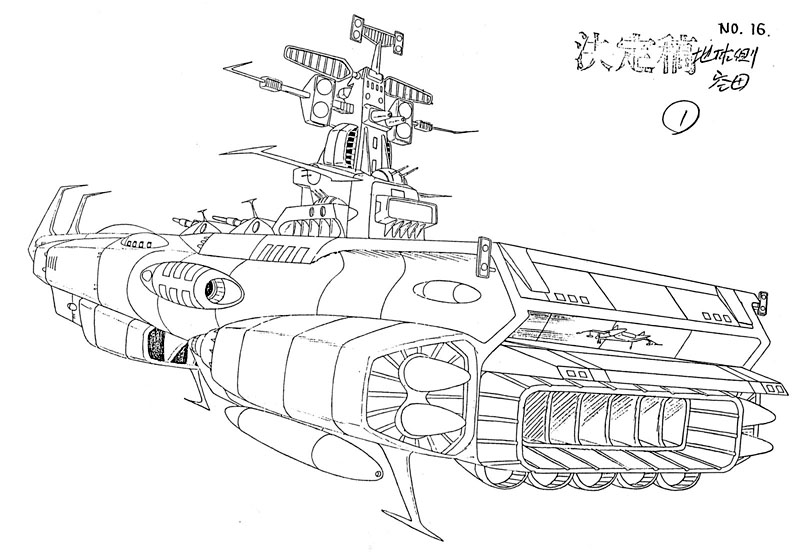 The EDF Carrier was another new ship created for the series. Itabashi remodeled the aft section of the EDF Battleship to add another element to the Earth side in the Battle of Saturn. 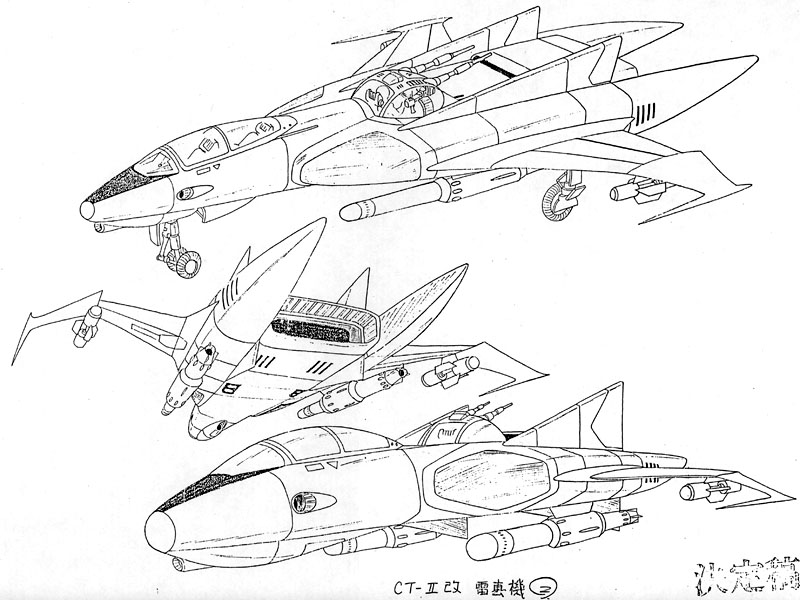 An new fighter came to life in a similar way when Itabashi shaved off the long nose of the Cosmo Tiger II and modified it into an anti-ship torpedo variant with a red paint scheme.

The EDF Torpedo Boat was one more new craft, designed by Matsumoto and cleaned up by Itabashi. It was one of the first mecha produced in the new studio, as attested by the date of September 3, 1978. 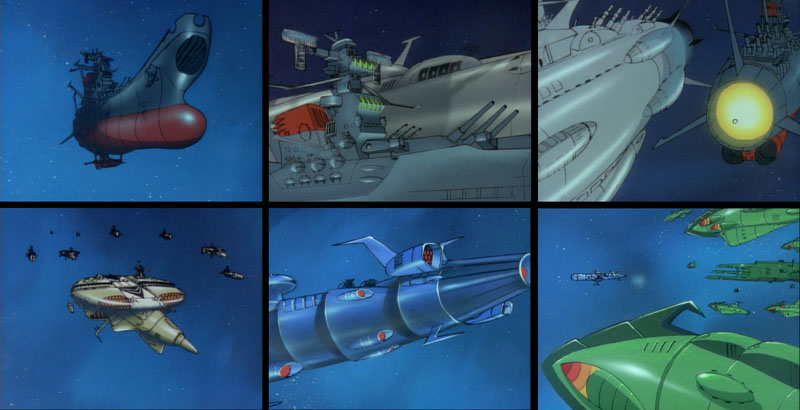 Finally, painted highlights and shadows on mecha were now a common feature of anime. Airbrush effects in both black and white were used extensively on the spaceships and other mecha of Yamato 2, which gave the program a stylistic dimension that was missing from Series 1. 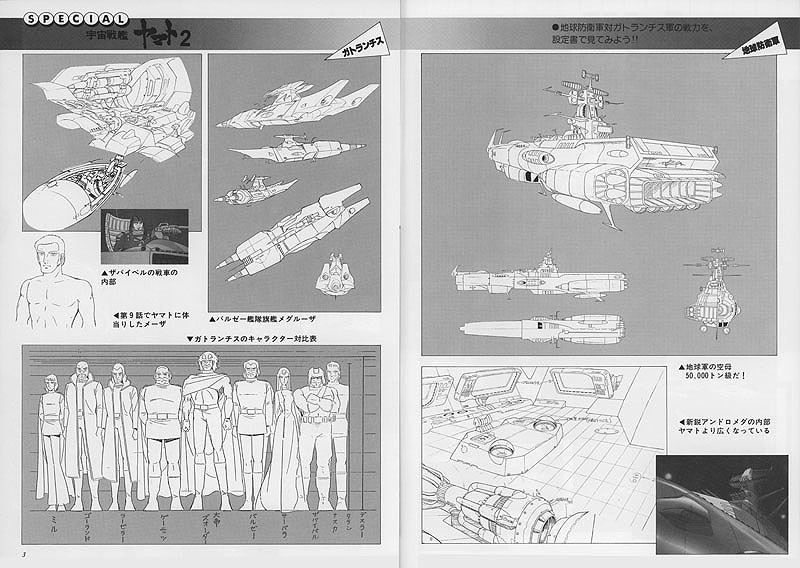 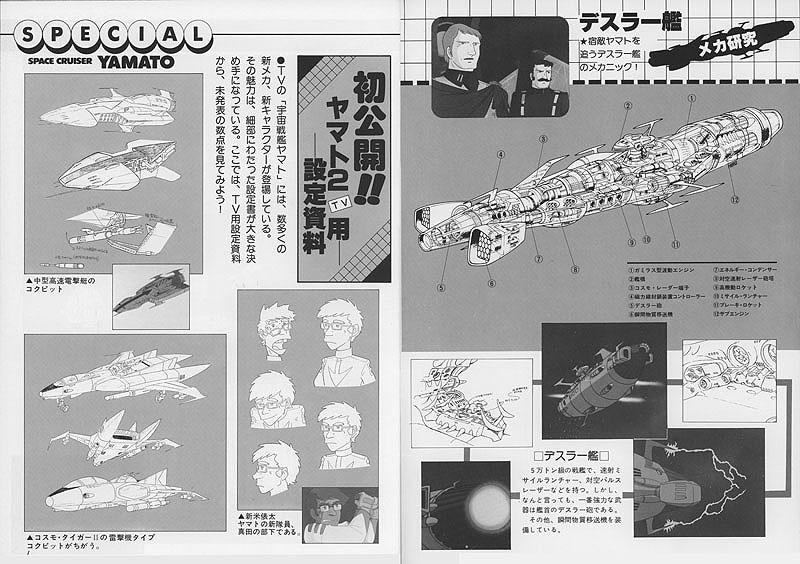