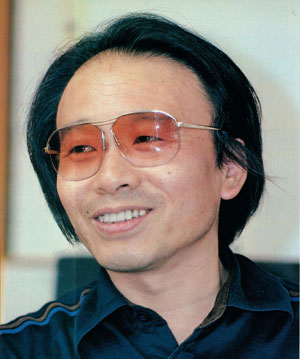 Keisuke Fujikawa’s name is not well-known to fans of Star Blazers, but in the pantheon of Space Battleship Yamato he is a pivotal figure. He was the most prolific writer of the entire saga, responsible for well over half of all the TV episode scripts and a major figure in the writing of the movies.

Fittingly, his involvement began before that of any other writer, since he was the very first to crack the concept for the series. The following proposal was written at Yoshinobu Nishizaki’s request in April 1973 and represents the earliest attempt to capture in words the story we would eventually come to know.

The art shown here was created in summer 1973 for the first plan book that promoted the series to prospective sponsors.

At this time, Earth is devastated by the onslaught of a mysterious planet and has been contaminated by radiation to such a degree that the surface is no longer inhabitable by humans. Civilization has moved into hiding underground.

This subterranean nation has an artificial sun and all vital functions, and as such it has prospered. The cumulative knowledge of humankind has been squeezed into an organic computer and though it has been entrusted to make all final decisions, of course some people did not approve of it.

Some say that humans must regain all authority and decide their own affairs. Naturally, every situation brings about a clash between supporters and protestors, but they do not fight to the point of ruin.

Although life on Earth is basically stable, the radiation may reach underground in a few years and bring extinction to the human race.

Some thought about escape from Earth. They combined their power and wisdom, developed combat spacecraft, and concentrated everything into the construction of a space battleship. It consists of several spacecraft focusing on combat and exploration with a mothership acting as the center of research, development, and strategy. They combine to form a huge battleship for both offense and defense.

As for the crew, space soldiers were chosen from among the youth who carried the future of Earth, except for those in the command group. The Space battleship left to find a new home for humanity, carrying with it the great expectations of mankind…

Planets That are Explored

For the space soldiers, the exploration follows the tendrils sent out by our sun to other stars. There are planets of highly advanced creatures with civilizations far beyond human imagination, and others of lower order populated by insects no more advanced than an earthworm or plants like moss or ferns. 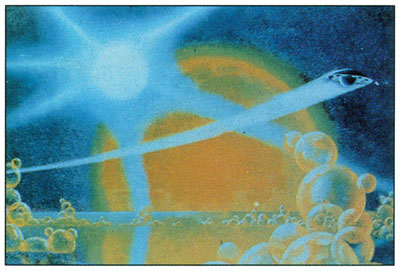 – A planet of people with two heads

– Space wanderers plotting a takeover of the solar system

– A planet of earth-like creatures with eight limbs

– A planet of four-dimensional monsters

– A planet of robots

– A planet of people turned into cyborgs

– A planet of nocturnal people who keep giant slugs

– A planet of huge crabs

– A planet of insect people

– A planet of spider monsters

– A planet of monsters made up only of eyeballs

In all cases, humans encounter biological phenomenae and the mystery of life. 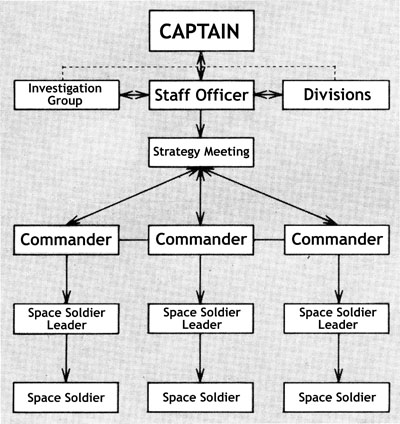 The Space battleship consists of four large warships: a mothership and three smaller warships. Each has a crew of 30 with a total of 10,000 people in the mothership. The organization is roughly shown in this diagram.

The space battleship usually functions as one huge unit, but the mothership and smaller warships can separate in an emergency. The warships each have their own specialty. They cannot fully defend themselves until they unite to fight against an enemy.

The mothership is divided into sections devoted to communication, navigation, equipment development and strategy planning. The warships play key roles in combat and exploration. 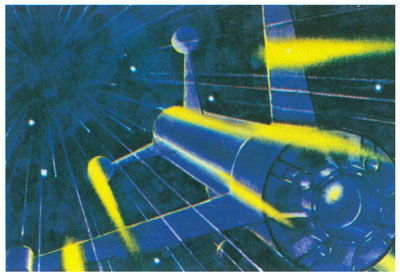 Sections of the Space Battleship

Data is collected from each section and delivered to the staff officers, making this the center of operational planning.

Builds and repairs such equipment as weapons for battles and robots for exploration.

Observes movements of celestial bodies and alien enemies. Also in charge of communication with Earth.

Responsible for operation of the space battleship.

Analyzes data obtained on each planet to decide whether it is suitable for human survival.

A man of natural virtue, though his past is a mystery. Was a captain in the past and received the support of every nation in the world. The oldest member of the crew, has final authority.

Cool in a crisis, sometimes cold to others. Very prudent and careful strategist. Does not believe in starting fights in space. Enjoys alcohol, can surprise others even when drunk.

Cheerful and accommodating, but can go too far and become disliked. Thinks of combat and exploration as a kind of sport.

Brave and resolute with a strong sense of justice. Sometimes hard on subordinates, which causes resistance. Sees no room for play in either combat or exploration.

Pushes and pulls on both sides to get the best out of them. Becomes foppish when affected by alcohol, but has strong authority.

A distinguished legend among the space battleship leaders. Lives to distinguish himself in battle.

A former criminal on Earth, full of anger toward the attackers who devasted the home planet.

Sees the exploration of other planets as an invasion by humans and harbors doubts about this action; a fatalist.