After a Long Time, A New Domestic Feature-Length Animation Movie 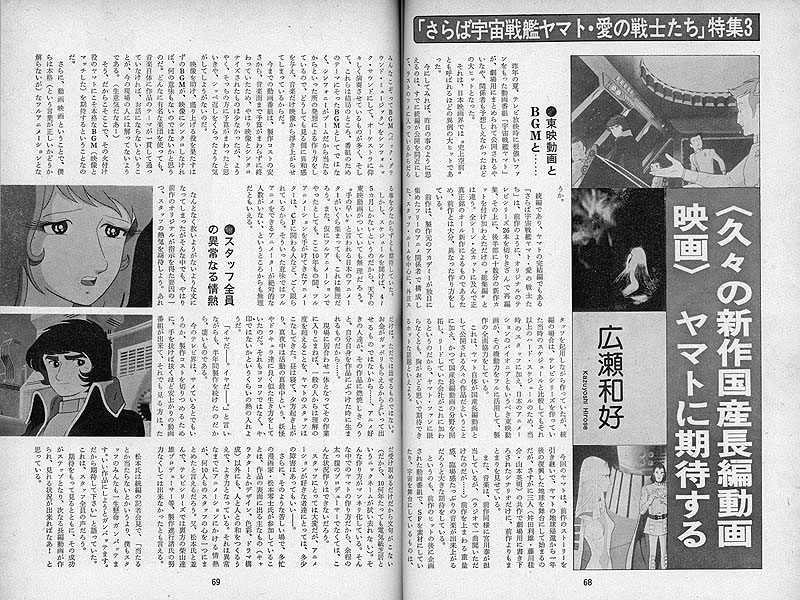 With Toei Animation and BGM…

Last summer, the deep-rooted animation program Space Battleship Yamato premiered in theatres, bringing together many fans and becoming a big hit for all concerned. Its success was exceptional, unprecedented in the history of Japanese film. Today seems just like yesterday, with the premiere of a sequel getting closer. Will it be the last?

Farewell to Yamato is both a sequel and the conclusion of the Yamato series. The previous film was made by chopping up and editing together the 26-episode TV series and adding ten minutes of new footage to the latter half, which differentiated it from a compilation program since it was altered from the previous work.

The original series was made by people in the anime industry who gathered at Academy Studio, some of whom were hired as subcontractors on the sequel since their work on the TV series accustomed them to a difficult schedule. They now cooperate with the Japanese animation pioneers on the Toei staff to mobilize their full power. It was after a long absence that Yamato itself reappeared as a feature-length animation movie, which lead it to join the company that pioneered the field of such films. Even if it is not limited to Yamato fans, it is expected to generate a lot of passion.

This film succeeds the story of the previous work, starting on an Earth which has revived one year after Yamato‘s return. As expected, the choice of its three scriptwriters (Toshia Masuda, Keisuke Fujikawa, and Hideaki Yamamoto) shows a lot of consistency with the previous work. Additionally, Hiroshi Miyagawa returns to take charge of the music and gives it a weight that exceeds what came before. There are great expectations for the music to establish a strong presence.

Because this film was planned after the success of the previous work, the development of SF material goes hand in hand with BGM of symphonic sound and there are many opportunities for the orchestra to play with a flourish. The concepts make the most of the booming symphony in unexpected ways, allowing the music and images to be completely compatible.

Conventional animation programs keep their production costs down by establishing a low budget for music, so it does not often synchronize well with the image. But the nature of BGM is that it should support the picture with excitement, and if the two are not synchronized, it has little meaning. Even if a famous orchestra is used, viewers now understand that music is part of the overall theme. Yamato‘s BGM was the instigator of this.

In addition, there is also the expectation of full animation. However, because there are only 4-5 months in the schedule, this may be impossible even for Toei even with the “fast hands” of every Japanese animator. Moreover, the number of animators who have studied full animation during the past ten years is very limited, and there may simply not be enough of them.

The Unusual Passion of the Staff

Despite the circumstances described in that last sentence, there is another factor that must be considered: the passion of the staff. That cannot be freely dismissed, because money is not the measure of quality when you consider the passion of those whose love of anime is reborn whenever they throw themselves into their work.

When you enter their integrated workplace, the Yamato staff’s activity defies the understanding of an ordinary person. They sleep during the day and get up in the evening, like Dracula reaching the peak of his activity at midnight. You might wonder if this is the mark of insanity, but they say, “no, no.” The amazing thing is that they have been working this way for half a year.

These days the TV industry looks for any way to cut down on production costs, and many complain that they get stuck in a rut (and they still cannot wipe out the “kamishibai” nickname even after 10 years). [Translator’s note: “kamishibai” translates as “paper theatre,” the term for performance-art storytelling with picture cards; the 1950s precursor to anime.] The producer of Yamato is more generous since Yamato could not be made in this situation, but the staff feels that a having some obstacles to overcome is a good thing even if they are serious ones. Even an artist as busy as Leiji Matsumoto participates in difficult tasks (character design, color, story concepts) to help things along and bolster harmony.

It can be said that this unusual passion for animation can bring together ten staff members’ minds into one. From Mr. Matsumoto to background producer Tatsuo Shibayama, no progress could be made without the efforts of everyone.

At the press conference for the sequel, Mr. Matsumoto said, “whether it’s a hit or not, all of us on the staff are doing our best. This is how good work is done. Therefore, please expect it.”

This might be the voice of the entire staff. Hopeful anticipation is a step toward success and possibly the next feature-length animated film! That’s what I think.