Before the release of Yamato Part 2, Producer Yoshinobu Nishizaki energetically toured the country. He was also in command of the entire production of the movie, which already exceeded the limit of his physical strength, but he still went on tour. Mr. Nishizaki wanted all the young people in Japan to see Yamato. The following is a transcript of the first “Fan Interchange Meeting” that took place in Nagoya on July 5th. 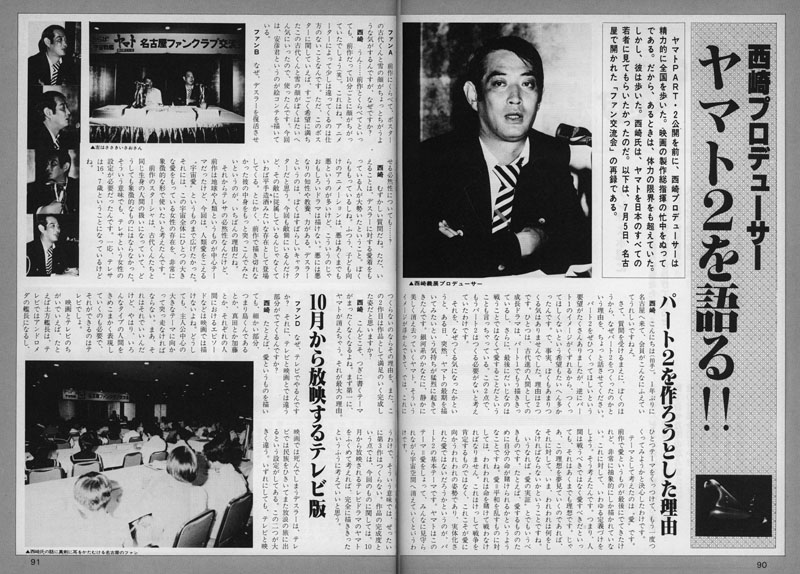 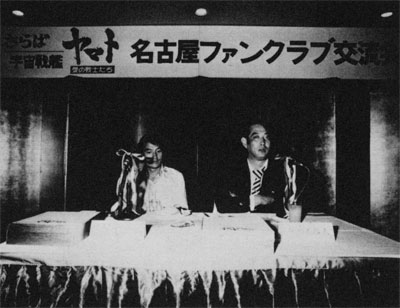 The Reason to Make Part 2

I’m glad to come to Nagoya after an interval of one year, and to see that the membership has increased so much. Now, before taking questions, let me speak a little about the reason I made Part 2. There were definitely a lot of requests to make a Part 2, but conversely there were also a lot of requests not to, since it might deviate from the image of Part 1.

In fact, I did not really intend to make it for two reasons. One was that we have already given a full-length portrait of Kodai’s growth into a human being. The other was that we stated it was more important to show love than to fight. I thought that a Part 2 would not have to be made because of those two points.

But suddenly, one day, I changed my feeling about this, and I intensely wanted to depict the end of Yamato. I had a vision of Yamato beautifully flying away and disappearing beyond the galaxy. This image floated in my head and became attached to a theme and I became determined to make it again.

The theme that came to me was “love.” Though we presented a love theme in the previous work, it was shown only in the abstract. By contrast, I thought, let’s give it a definition. The ideal that humans should love each other instead of fighting is very persistent. If we dream of this ideal, then what should we do about it?

One way is to demonstrate “proof” of love. For example, placing your life at risk for someone you love. We take our lives into our own hands to fight those who disturb love and peace. This is not an affirmation of war, but this is precisely our attitude toward love and it is the basic theme of Part 2. This theme of love will be felt by everyone as they watch Yamato disappear into space. 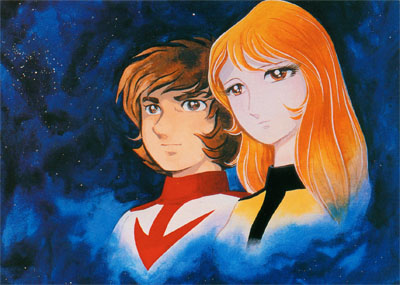 Fan A: Compared to the previous work, the faces of Kodai and Yuki look different on the poster [painted by Yasuhiko Yoshikazu]. Why is that?

Nishizaki: Yes…even if you compare them within the previous work, their faces looked different every ten minutes. (Laughter) Each animator draws a little differently, and it cannot be helped. But what I like about this painting is that the faces of Kodai and Yuki look very hopeful, so I used it. Mr. Yoshikazu is also drawing storyboards for the film this time.

Fan B: Why did you revive Dessler? Was it out of necessity for Teresa to appear?

Nishizaki: It is a difficult question. What I can say is that there were many people who had an attachment to Dessler. Usually animation is for children, so evil must be portrayed as purely evil, which doesn’t make for a very interesting drama. Dessler is a wonderful character because he is cultured and intelligent. Even though he is on the enemy side this time, he is not subordinate to the enemy. He’s more like the oil in the palm of your hand, so to speak. Anyway, the best reason was that I wanted to explore his character more than I could in the previous work.

About the necessity of Teresa, the central theme of the previous work was about Earth and mankind, and this time I wanted to expand human love to what I call “space love.” I thought the existence of a woman whose love is as great as all of space was a good symbolic form for this. Starsha was handled the same as Kodai and other living human begins, so in the end she did not become a symbol. The concept of Teresa was necessary for such a meaning. Tentatively, she is meant to be 16 or 17 years old.

Fan C: Will there be a third Yamato? If not, please give the reason. Also, do you think these two stories will complete the work satisfactorily?

Nishizaki: As of now, I do not have another theme in mind. The main reason is that this time Yamato disappears.

TV Version to be Broadcast in October

Fan D: Why are you making a TV version? How will it be different from the movie?

Nishizaki: One example is that even with the love theme we cannot present detailed stories about Shima, Sanada, Kato, or other characters in the movie. The theme should always be centered on the main character, and I’m okay with that. On TV it is possible to depict a variety of different people. Captain Hijikata is a good example of the differences between TV and film. In the TV version he becomes the captain of the Andromeda, so in a sense that will become the third work.

In terms of the completeness of the work, I think the Yamato TV series that begins in October will allow us to present a full portrait of the characters. Dessler will die in the movie, but at the end of the TV series he and his people will wander off into space. There is a big difference. In any event, I would like you to see both the TV and movie versions for a perfect combination.

Fan E: The first Captain was Okita, why did the next become Hijikata?

Nishizaki: There is no special reason. It’s just because the previous captain was Okita, the next will be Hijikata. You know, they’re based on Soushi Okita and Toshizou Hijikata [of the Shinsengumi Police Force]. Leiji Matsumoto named them, and in fact the new character Saito is also named after a member of the Shinsengumi. Then the only one left is Isami Kondou. (Laughter)

[Note: read more about the Shinsengumi Force’s influence on Yamato character design here, at the bottom of the page.]

There’s another funny story about the names. The name of Saburo Kato of the Black Tiger team was taken from the leader of the Kato Hayabusa Fighter Wing. [Translator’s note: this was a WWII squadron that fought the USAF Flying Tigers over China; the leader’s name was Tateo Kato.]

We didn’t know this, but Saburo Kato was also the name of a terrorist bomber. (Laughter) I received a letter from a fan that blamed me for it, “you cruel, malicious devil! Why did you give my darling Saburo Kato the same name as a damnable terrorist bomber?!” It also said, “Are you a friend of the terrorist?” (Laughter) 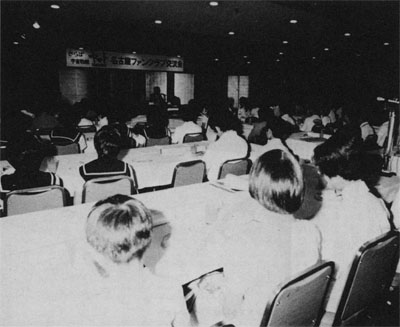 Fan F: Has Yamato been modified with new parts since the previous work?

Nishizaki: In the case of the TV version, Yamato has many new weapons, but not particularly in the movie. The torpedoes were not used much before, but they are this time. The mecha for the Black Tigers is a little different. In that sense, the parts have changed a lot.

Fan G: Will Shima get a lover this time?

Nishizaki: When it was said that I wanted Shima to get a lover, I received letters of intense protest. However, Kodai stole Yuki from him in the previous work, and I feel sorry for him. Postcards also came from those asking for Shima to get a lover. I was worried about how to cope with those demands. (Laughter)

You might be relieved when I say I did not make a lover for Shima this time, or maybe you won’t.

Nishizaki: People in animation don’t have much contact with the world of beauty and fashion. Therefore, when we draw women’s clothing it has the risk of being unfashionable. Once when I ask for a pure white negligee, they thought of one with a ribbon on the chest. I was asked, “is it scanty?” That was a person who had a reputation for drinking. (Laughter)

That’s why I asked Yukiko Hanai to design some townwear that could appear around 200 years from now that would not appear incongruous. 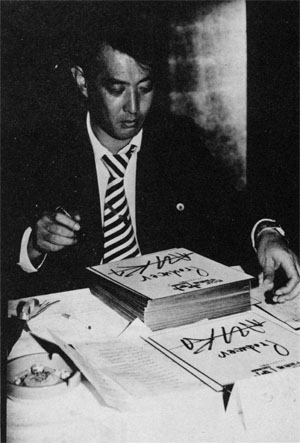 Fan H: Yamato products have been around for about a year. I don’t understand the reason for commercializing and selling it.

Nishizaki: It’s unfortunate that you don’t understand it. Think about this way; what if Yamato became a movie, but there were NO Yamato products on the market. How could something like that happen? It’s a matter of moderation, but I’ve never allowed easy merchandise like candy or shoes with Yamato slapped on, unlike other manga characters.

If I just hand design art over to manufacturers, they modify it very poorly, so I made all the products through my own company. In terms of toys, there is the one deformed plastic model, but even in that case we remade wooden [prototype] models for it dozens of times so it wouldn’t harm the image of Yamato even if it isn’t a standard version.

I want you to understand that our products are the result of such efforts. You know, whitewashed idealistic criticism won’t make money, and without money we can’t produce our next work. So please buy a lot! (Laughter)

Nishizaki: There’s a famous story that Mi-kun was based on Leiji Matsumoto’s cat, who looked a little grungy. (Laughter) Therefore, I had him design a bright, clean cat this time, and bring it onto the ship with Dr. Sado. There’s a prescient scene where Sado is drinking sake and talking absent-mindedly, and he pours some and hands it to Mi-Kun. Usually a cat will lick at a drink right away, but this time it trembles and clings to the leg of a table. Sado wonders why this is, and suddenly there’s an forceful attack by space mines. Mi-Kun fans can look forward to that scene.

Well, I think I should finish here. Many thanks.