Total number of paint colors: over 150 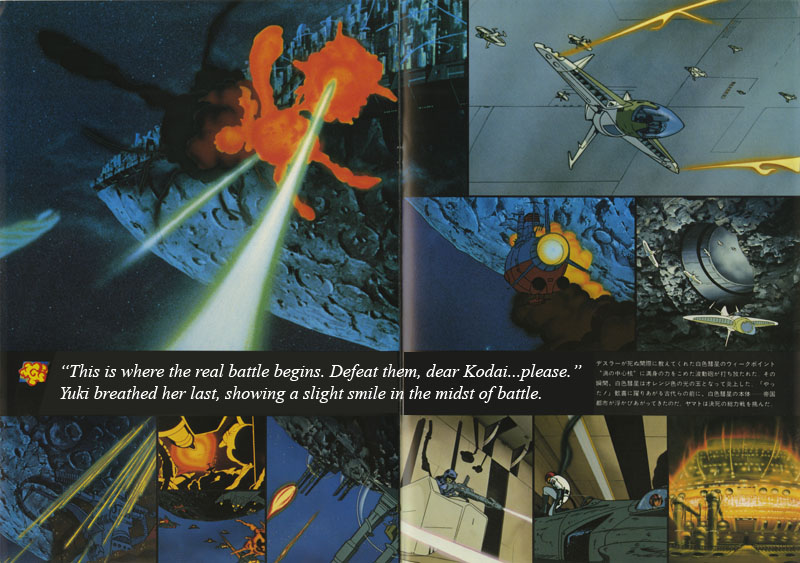 It took 4 months to create the script and storyboards

Meetings were held every night and day with Executive Producer Nishizaki and other staff members, including writer Leiji Matsumoto, SF concept creator Aritsune Toyota, script writer Hideaki Yamamoto, and producer Itaru Yoshida. Meetings often ran from 10am until 2am the next morning, and it was not unusual for such meetings to last over 14 hours. The story and the theme of the film were polished again and again. It is unthinkable to go to such lengths for regular theatrical films. For study, the staff members traveled to Hawaii to watch the famous American SF films Star Wars and Close Encounters of the Third Kind, and they eagerly continued discussion there.

The process was very elaborate; when a story concept was agreed upon, Director Masuda expanded it into a treatment. This was then reviewed by Matsumoto and Toyota, and their revisions were discussed in additional meetings. After taking four months to complete the script (the core and foundation of the film) and the storyboard (the visual base), the staff members had all reached total exhaustion. But the effort resulted in a story of gigantic power.

The Yamato staff teams up with Toei

Producer Nishizaki was the head of production for the first Yamato series, which pushed him far beyond anything he had imagined. Toei Studio participated in the production of this new film, and the cooperation between the two parties combined their strengths to greatly improve the finished work. At the beginning, the Yamato team and the Toei team had different approaches because of each party’s unique character, but eventually the strong zeal of Producer Nishizaki united them. The character of the Yamato team and the technical sophistication of Toei were fused together into an effective production process.

One of the strengths of the film is its wide variety of mecha designs, which fans always look forward to. Such mecha includes the hero ship Yamato, the enemy’s gigantic white comet, the latest squadron, groups of fighters, tank corps, the Earth Defense Force’s newest battleship Andromeda, advanced guard UFOs, and an android army corps. Each has its own unique charm, infinitely increasing the visual excitement only SF can create. 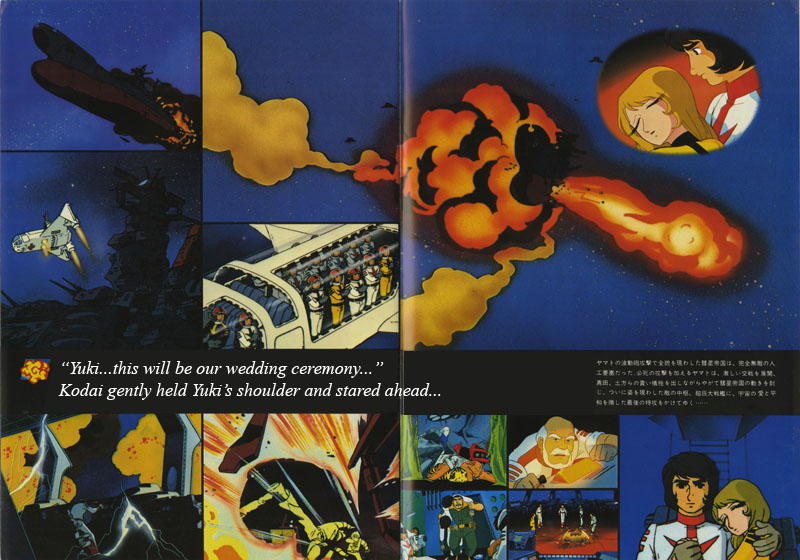 A pipe organ used for the theme of evil!

In order to effectively express the “infinite evil” of the gigantic empire planet Gatlantis ruled by the Great Emperor Zordar, this film attempted something unique and adventurous in presenting a musical theme with a pipe organ and orchestra. Originally, a pipe organ was used for majestic religious music, with Bach’s works as a prime example, but was not often used to play music with an evil theme. After much hard work, Composer Miyagawa created a powerful, dynamic piece for pipe organ which, like religious music, shakes the spirit of the listener for a great effect.

Three songs were written for Farewell to Yamato by Yu Aku: From Yamato With Love, which can be considered the main theme, Teresa Forever, which elegantly admires the goddess of love and prayer, and The Rival, which expresses the nobility of the exiled Dessler. The music for the latter two songs was composed by Hiroshi Miyagawa. His music is well-matched with
Aku’s lyrics, each of which has its own charm. These songs deeply touch the hearts of Yamato fans.

Thanks to all these experts in different fields working tirelessly day and night, Farewell to Yamato is a very complete and substantial work.

A first in anime history! The appointment of a fashion designer!

It was Ms. Yukiko Hanai, a popular fashion designer, who designed the clothing of Yuki Mori. This is the first time a professional fashion designer has participated in an animated film. Designing for anime is also a first for Ms. Hanai, so she was very excited. Her design for Yuki was very well-received since it could be easily worn by anyone today. 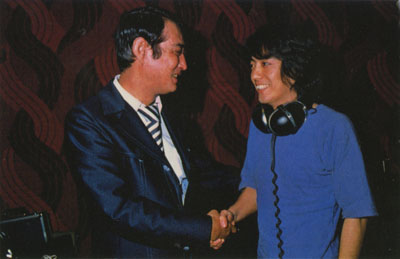 The previous Yamato film was well-respected by music fans. Because of this, great attention was given to the music for this project, particularly the ending theme song. What song could be suitable for the finale of Yamato itself and also fully express the main theme of the film, which is love? Staff meetings were held time after time to answer this difficult question, and Producer Nishizaki himself considered singers from the whole variety of genres; pop, modern, new age, and folk. Consequently, Kenji Sawada was chosen. Nishizaki said that “both his vocal skill and his talent as a world-class entertainer were big reasons, but more than that, the feeling of love sung by him is perfectly matched with that of Yamato.”

Recording was done at Tokyo’s Sound City on a rainy June 23, 1978. It was the first time Nishizaki and Sawada officially met, but their discussion was very passionate from the beginning, and after several rehearsals the recording was completed. Afterward, Nishizaki said, “Mr. Sawada matched the image I developed in my heart. He was excellent. His feeling is exactly right for Yamato.” This was due, no doubt, to the lyrics by Yu Aku and music by Katsuo Ono, the “golden pair” who produced some of Sawada’s other hit songs. Arrangement was done by the master, Hiroshi Miyagawa. The combined power of this phenomenal staff was concentrated in the song. 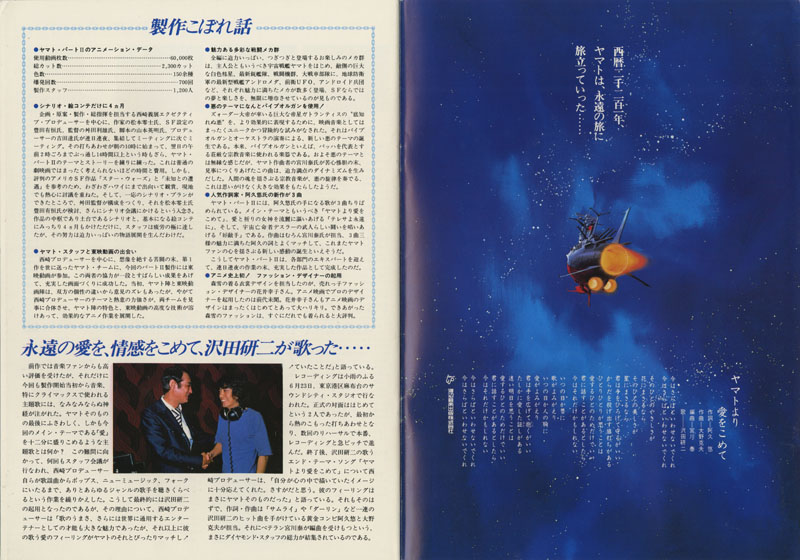