Translation of the novel, continued

The last fleet of Earth was about to begin the final decisive battle against the Gamilas fleet.

“How many more seconds until the Gamilas ship is targeted,” shouted Mori Yuki. The control stick she grasped was running hot all by itself.

Aihara, communications officer on Captain Okita’s flagship, conveyed this in a tense voice. Glancing away from her communicator, Yuki made an irritated click with her tongue as she looked to her meter for confirmation. An alarm was blinking red. Low ammunition.

The tempered glass of her cockpit canopy reflected a white flash of burning magnesium. She instinctively shut her eyes and averted her face. Through narrowed eyelids she saw the source of the flash, a flare dyed palm-white. A fightercraft painted yellow and black was visible in the gap of light for an instant before its body swelled to several times its normal mass, then split open from the inside. The remains of Black Tiger 077’s airframe dispersed around Yuki, then instantaneously disappeared into space on her other side.

In the silence of space, the destruction of Yuki’s military colleague only stimulated her optic nerve, leaving nothing behind. No remains were left to mark the defeat. No one paid heed to the dead.

“Mori Unit, reaching the outside of the sphere, transferring to anti-shock flight.”

At first, Yuki watched the radar. several seconds elapsed before she turned her head to look back out into space. Most of the Black Tigers had reached the outer edge of the guns’ range. Only the Gamilas fighters, like flies in the summer heat, remained in that killing sphere. Looking like the 5-legged Annelids that live in beach sand, the flat, round enemy fighters turned irregularly around their mothership, defending it from the attacks of Yuki’s Black Tigers and the Earth Defense Corps.

–Heavy losses with less than a 50% survival rate–

Yuki calmly assessed the war situation. Before the Earth Defense Forces could fire their shock cannons, the location of their target had to be precisely attained, so it was the duty of Yuki’s Black Tiger Corps to get that vital lock-on. Therefore, she had slipped her fighter past the enemy barrage to the point that was supposedly the engine area of the Gamilas cruiser.

Several fighters were shot down and many people died, their bodies broken and scattered. But this was not the time for grieving and it was neither training nor simulation that Yuki Mori now faced. On the contrary, it was “actual combat”–the last, decisive battle between humans and the alien “Gamilas.”

Five long years had passed since the mysterious enemy began its attack on Earth, and the end was now unfolding before her eyes.

Before the overwhelming technology of the Gamilas fleet, the ships of Earth were powerless, like an infant still in development. Engines with good fuel efficiency had been built in recent years, finally able to manage several percent the speed of light. Manned flight to other planets in the solar system had just started to become routine. Before the Gamilas attack, people had been excited by such news as, “construction of a manned station beginning on Mars,” and “Exploration Team Sent to Pluto.”

The full use of warp navigation was finally about to enlarge the sphere of human activity when aliens with faster-than-light velocity ignited their attack. There was no way to resist them.

Two ships were destroyed. Flashes of light pricked at Yuki’s retina. She craned her neck to stare out into the pitch black of space and saw a small explosion. A yellow airframe appeared momentarily in the burst and a noise caught in Yuki’s throat. Another ally, dead. In the next moment, complete darkness and flying debris. Another friend lost, scattered into space.

It was critical to keep one’s emotions in check in the battlefield, and even at 24 years old, Yuki knew the art of self control. But seeing so many companions go down in flames, she bit and tightened her lips as she tried to grasp the number. Seeing the proud, hostile enemy fleet lined up in space against such a weak opponent, she felt she could not be the only one who felt it was impossible, even if she never spoke those words.

It was no longer a question of differing potential. It was like throwing stones in a gunfight. It was an all-out war of knives vs. missiles.

Aihara’s voice trembled a little. Bunched up in her cockpit, Yuki felt her shoulders tremble as well. Fear of the next moment. It was the final assault, all the science of Earth concentrated into one last blow from the shock cannon born out of the collective wisdom of mankind. If it did not connect, the human race would be defeated. Its destiny would be decided by this shot.

Yuki closed her eyes for a moment. That was it. The enemy’s armor was too heavy. All the scientific might of Earth could not break through one piece of it. The difference in power could never have been overcome no matter how much was piled against it. Regardless of numbers, the humans had lost from the start.

As if waiting for their turn, the photon cannons of the enemy fleet were fired all at once. Earth’s escort ships know nothing about the art of evasive maneuvers and lacked heavy armor. Wherever a blow struck, hulls erupted and exploded violently.

In the immediate vicinity of Captain Okita’s flagship, a huge hole opened instantly in the starboard flank of an escort vessel. Its armor was scattered into metal fragments along with the bodies of human beings in combat uniforms. A bulkhead ruptured and disgorged its contents into space like so much garbage. Now gutted, the ship opened like a balloon pierced with a needle. It lost its uneven shape and collapsed into an ellipse, like a star crushed by its own gravity. It flashed like blasting powder for a split second and scattered as if the entire ship had been an explosive.

Aihara’s painful cry jumped from Okita’s warship to Yuki’s ear in her cockpit.

Yuki had not seen Fuyuzuke‘s destruction. Her face had instinctively turned away. She hadn’t wanted to see it, but the communicator in her cockpit told the cruel reality.

More shaking voices crowded in on her.

“Auto-contact from Hiei, all crew lost!”

The escort ships were falling one by one. The enemy barrage looked like horizontal rainfall, countless shining gold spears that sent small, continous explosions into the Earth fleet. Small explosions caused chains of larger ones until entire ships became huge balls of light. None escaped undamaged. Screaming in a spray of blood, every ship kept up a desperate resistance. 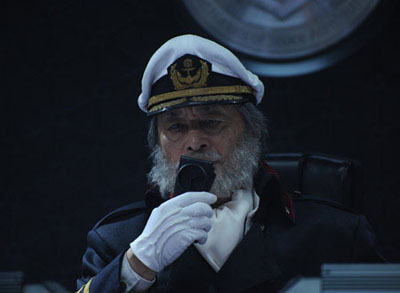 The shower of death from the enemy fleet continued uninterrupted. Yuki closed her eyes, depriving herself of a view that brought only despair. She wished she could have closed her mind, too. She wanted nothing less than to face the hard reality in front of her.

The Earth fleet was gone. Earth would fall.

Yuki’s shoulders shook. Her own death frightened her far less than the death of the human race. She felt her strength draining from her body.

Another communication came from Okita’s ship. In her weakened state, all she had to do was turn her head to look at the monitor. She heard Captain Okita’s voice. It was heavy.

“Attention, all remaining ships and battle groups. We will retreat. We no longer have a single ship that can prevail.”

She was told to escape. Escape from here because we cannot win.

“But escape to where?” she thought with a masochistic smile.

Captain Okita was right, mankind had used up all its shots. Whether they were killed in a direct attack or by Planet Bomb, running back to Earth would only delay death a little. The difference was only “now” or “tomorrow.” 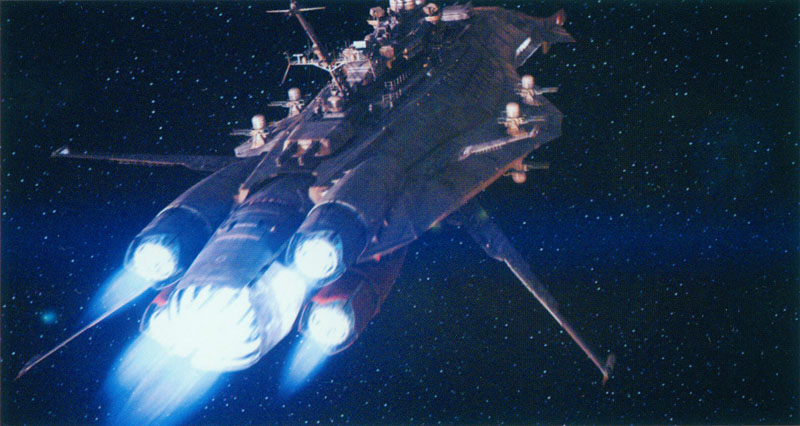 The voice of a different man interrupted the noise.

Yuki opened her eyes wide and listened. Something drew her to this voice. It hadn’t given up yet. It was the voice of a man who was still fighting.

“I cannot obey your command to withdraw! I could never show my face to the friends I’ve lost!”

It was a desperate voice, contrasted by Captain Okita’s calm.

“Whether you agree with it or not, the withdrawal is my order, Kodai. We’re all that’s left to defend the Earth. A true man bears the humiliation of today for the sake of tomorrow.”

“I don’t think so! Even if it’s hopeless, we can still take our enemies with us! Isn’t that what a man does?”

There was a pause for breath. The microphone picked up the small sound of an exhale.

“Captain Okita…we’re proud to have fought with you.”

With most of the Earth fleet destroyed, there was nothing to check the advance of the Gamilas fightercraft. But Yuki’s Black Tiger Corps could not stand helplessly by. They had to do something to obstruct the fighters that now crowded toward Okita’s flagship like a swarm of flies. Though she understood that, her body would not move.

After the loss of a mothership and a path to retreat, despair and helplessness drained her energy and willpower down to their roots. An energy leak poured like smoke out of the bow of Okita’s ship. It tried to turn, rolling its guns toward the Gamilas fighters, but a gaping hole suddenly opened on its starboard side.

A single Gamilas fighter approached Okita’s bridge. Yuki watched it and felt feelings stir inside her. Despair brings everything to an end. Isn’t that what Captain Okita said? Never to give up, even down to the last person?

She grasped the control stick and shoved it forward, pouring machine-gun fire into the Gamilas ship that was about to attack Okita. Catching it by surprise, Yuki’s shots caused a small explosion in its engine area. Confirming that it was rendered inoperable, Yuki dove under Okita’s ship. She lead several planes into the hangar in succession just before the hatch closed.

Yuki Mori leaped out of her cockpit and started for the first bridge. Okita’s warship finished its turn and began pulling away from the battlefield. She was anxious about Yukikaze and the words of Captain Mamoru Kodai. She began to run and soon arrived at the bridge deck holding her helmet at her side.

A ghastly sight was projected onto the bridge’s huge panel screen. Mamoru Kodai’s destroyer was just behind Okita’s ship. Bathed in countless shots that punched innumerable holes in its body, it was protecting Okita’s escape route. Gamilas fighters danced around it like a swarm of flies, fluttering and biting at Yukikaze.

A flash of light appeared in Yukikaze‘s bridge. As Okita’s ship advanced away, the image of Yukikaze shrank on the screen. Light and smoke spouted from its entire body, but it continued to act as a shield against Gamilas attacks.

Its only purpose was to protect Okita’s warship. In so doing, it protected the hope with which Okita had been entrusted by mankind.

Screams of agony were swallowed by the sound of the ship’s body breaking and a the collapse of its power reactor. Light burst out of Yukikaze like an exploding supernova. Yuki stared at the panel screen, forgetting to blink. Captain Okita pressed his lips firmly together and stared at the monitor. Yuki barely heard him.

“There was more work for you to do. The future needed you…”

The last battle of the Earth Defense Force was over. Captain Okita’s flagship was the lone survivor. The hope he had been entrusted with now turned to despair. People grieved for the future, starved for hope, and were swallowed by darkness.

But there was still a sliver of that hope left in the ground. The people did not yet know that Yamato was there in the Earth.