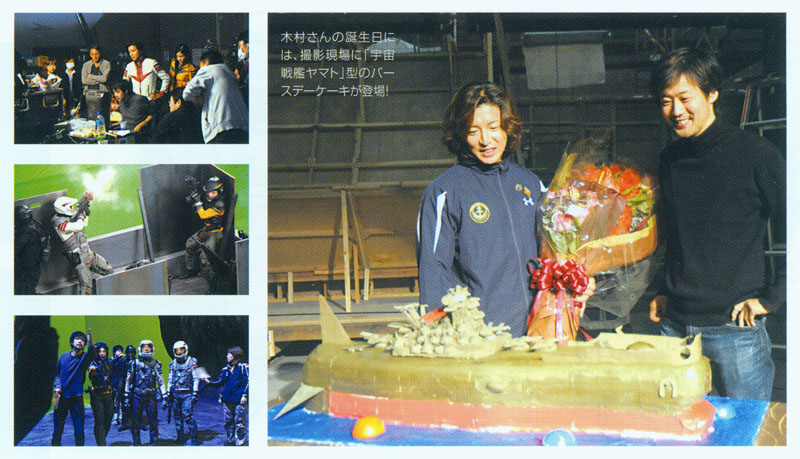 Born in Tokyo, 1970. She developed an interest in film production after seeing Star Wars and Back to the Future. She joined Shirogumi as a miniature maker and worked under Director Juzo Itami in digital compositing for Critical Patient [1993]. Thereafter, she engaged in VFX for a large number of commercials, movies, and TV dramas. She serves as VFX Director on all of Takashi Yamazaki’s films. Her other works include Bayside Shakedown 2 [2003], K-20: the Fiend with 20 Faces [2008], and others.

The Impression of the original and the details were carefully expressed

Interviewer: What was your first thought when you began work on Yamato?

Shibuya: I knew there was a plan to make a live-action Yamato movie and that Director Yamazaki would surely take it, but I didn’t think it would fall to me! (Laughter)

Although “space SF” appeared in Juvenile, it was set in the present day to some degree, and Returner starts in the future but is a time travel story to the present day. And because a parallel world is the stage for K-20, this was the first time I worked on a film with a full-scale treatment of space and the future. Because it is entirely a world of imagination, I expected it would be difficult to make. Besides, while being conscious of the original anime’s vision, it was necessary to include some reality in that.

I considered the designing and making of scenes to be the biggest workload, but the most important thing was to materialize the world that Mr. Yamazaki wanted to express. The director’s passion was in every shot.

Interviewer: What was your own Space Battleship Yamato experience?

Shibuya: I was of the generation that saw it in evening broadcast reruns rather than realtime, but my memories are of being excited by the detail and Yamato‘s launches and the firing of the Wave-Motion Gun. It’s a rare anime that has such memorable parts. Because of my vivid impressions of the original, I worked to express the details carefully with Director Yamazaki, even if it wasn’t identical to the anime. I pushed forward in the production with that thought.

Interviewer: What was the number of VFX shots this time?

Shibuya: It was the most in any of Director Yamazaki’s films, about 500 shots. CG accounted for nearly half of them, so it was quite hard. Because there were more than 1,000 shots [total] in a movie which used a lot of VFX, it might give the impression that there were fewer than that, but in Yamazaki’s case some of the shots are long ones, and VFX were used for a total volume of 65 minutes. Some action scenes are entirely supported by VFX shots.

It was also the largest crew for a Yamazaki film, so it was a maximum project. The post-production period was about eight months, and some staff members were on the movie for about a year.

Shibuya: Of course it was. A battle scene, for example, has a full CG background, but live-action photography of a cockpit would be shot in advance. In that case, it’s not possible for the staff and cast to understand the flow of a scene if the context is not decided to some extent beforehand. Therefore, pre-viz began before crank-in [the start of principal photography] and we steadily worked on the content ahead of shooting.

On the day of a shoot or the day before, we could use the pre-viz to explain a scene to an actor and make the arrangements for the photography. Most of the scenes with pre-viz were those with full CG backgrounds.

When the image of a scene was not fully realized in the mind of the director, or pre-viz was not ready by the shooting day, I prepared image boards. The underground city of Gamilas and especially the deeper locations in the background were made in this way. Based on Director Yamazaki’s rough design, the art team drew image boards to use as [temporary] matte paintings.

Interviewer: How did you shoot the Gamilas underground city?

Shibuya: The shooting was carried out with the image boards as reference. The budget for live-action filming has a limit, which imposes limits on how much of a set can be built. So a method of unifying a set with CG surroundings became the priority. For days, there was just a floor and two rocks, and the set was only six by six meters. (Laughter) We changed the angle to see different places and used various photographic tricks. Because we’ve done movie shoots like that before, we knew how to expand a set’s background in post-production.

For the location in the Gamilas underground passage where the landing vehicle overturns, and the deepest part of that background, miniature sets were built with art designs and image boards as reference. Although we were going to convert that background to CG, by creating a miniature the director could get a feel for it and gradually decide on his angles. When the rocks and ground were built, they were already connected to the shoot by art images so we could decide to put a wide-open space in one area or divert a wall to another area, and think about different ways to arrange and combine the background.

Interviewer: Other than that, what is the difference in VFX compared to Yamazaki’s previous works?

Shibuya: In past works, the requirements were to add objects to a location, but this time it was necessary to create effects and phenomenae. For instance, the ground cracking when Yamato rises, breaking up the accumulated soil, and smoke winding upward. Those are the most difficult kinds of effects, and since the director worked so hard on them I watched from the shadows. (Laughter)

Interviewer: How will you look back on this work?

Shibuya: In a world where an infinite choice of images is possible, what you choose is important. Therefore, I think our job is to present options for the director to choose from. For every shot used in the film, there are a lot of images that were not used, and the final scene was chosen over a big pile of corpses. (Laughter)

In Ballad [2009], even if the castle and battle were the main attraction, there were a lot of important shots that expressed the overall look of the world, and the staff was scattered doing work on every piece. It took more time and was a greater burden on the staff than I thought, and I felt that we barely achieved our goal. But every time I checked during the last month of post-production, the look of each shot changed dramatically and became very different. Those finishing touches were truly amazing.

Since the amount of work we can do with VFX alone is limited, eventually we need to cooperate with real people. (Laughter) I think it was great to work with this staff.

Born in 1964. In 1987, she went abroad to study at London International Film School. She did script supervision for a Japanese/British co-production of Virginia. She was an ‘Abori Arts Award’ winner in Tokyo International Fantasy Film awards. She directed Eko Eko Azarak [1995] and won the Critics Award in the Yubari International Fantasy Film Festival. She directed the opening movie for the game Onimusha [2000], which was the first Japanese entry to win Best of Show at Siggraph. She wrote and directed K-20: the Fiend with 20 Faces, which went on to be a big hit. She continues to write and direct for movies, dramas, commercials, games, and is active in many other fields. Her most prominent script credits include: Yasha [ANB, 2000], Falling in Love: the Secret of My Success [CX, 2005], Unfair [KTV Series, 2006], Unfair the Movie [2007] and many others.

I saw the TV version in elementary school, listened to the Farewell to Yamato radio drama in junior high, and put up a poster at my high school graduation. As a fan, I wanted to see a live-action version of the first TV series. When I thought about how to make the series into a movie, I reviewed the feature film compilation again and it was difficult to watch while knowing about the TV version.

With the live-action Yamato film, I wanted people who had never seen it on TV to enjoy it as a standalone movie. Space Battleship Yamato travels to Iscandar to retrieve the radiation removal device that can save the Earth; the main character and hero Kodai becomes the acting captain, bears a heavy responsibility, and continues to grow up. That was the main theme of the TV series, which was reconstituted into a two-hour movie. To do this work, I had to change some of the settings.

If I were to give an example of one big change, it was the title of the heroine, Yuki. In accordance with the original, my first draft of the script had her as a radar operator, leader of the life group, and nurse. In order to depict her relationship and emotional conflict with the main character in a battle-centered story, Kodai finds fault in her every radar reading, complains about her bad coffee, and doesn’t get any payback even when he’s injured. As a result, I decided to assign Yuki to the combat group. I’d like to take this occasion to apologize to fans of the TV version.

If the new generation who sees this movie without knowing the original decides to go back and watch Farewell to Yamato and the TV anime version, I will feel fully rewarded and couldn’t ever be happier. 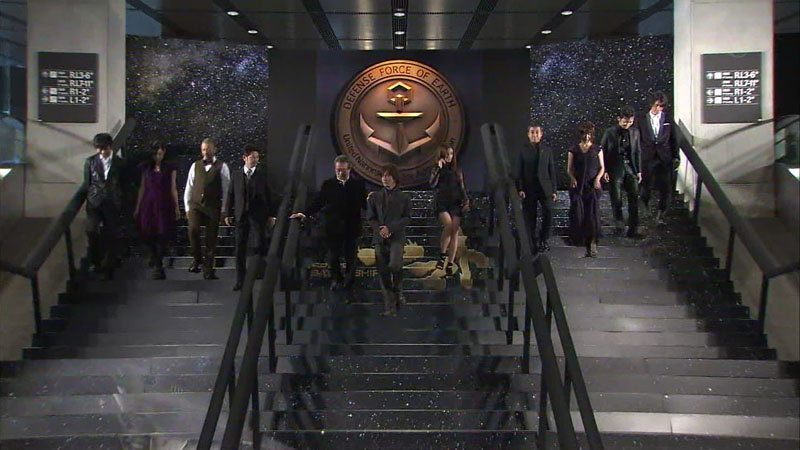 The cast descends the grand staircase after the first preview screening in Tokyo, November 1, 2010.

Born in 1970. He won the 29th Japan Academy Best Music award for the score of Director Yamazaki’s Always [2005]. In addition to movies, he has worked on anime, TV dramas, and commercials, and always adds an impressive tone with lyrical, beautiful melodies. His best-known scores were for Sea Monkey [2004], Always and Lorelei [2005], Sea Monkey/Limit of Love [2006], Letter, Kisaragi, and Always 2 [2007], Silver Season, Team Bachi’s Glorious Evening, Gachi Boy, Last Princess of the Hidden Fortress, and K-20 [2008], Triumphant Return of General Rouge and Hagetaka [2009], Sea Monkey/Last Message [2010], and he supervised the music for the NHK drama biography Ryoma [2010] among others.

That wonderful melody. How does maestro Hiroshi Miyagawa’s music evolve in this version of Space Battleship Yamato? Of course, it is the score’s “ultimate weapon,” but it becomes dangerous if used incorrectly.

No, no. It is not that complicated or difficult. The one thing I kept in mind was not to betray it. Keeping to that rule, it went quite well.

My selfish thought was that my new, original main theme of Yamato should accompany the new appearance of Yamato. But then I would be the only one happy with it. Everyone must want to hear that familiar melody. It gives a pleasant flow to a scene. Space Battleship Yamato is absolutely a Miyagawa melody.

If I were asked if the composing this time was made difficult or painful by jealousy and frustration, the answer is, “absolutely not.” Standing between splendid visuals and magnificent melodies, I was quite willing to work on creating the music. It was my most exciting, thrilling composition period.

I was impressed to see Director Yamazaki’s smile when he stood on the stage at the preview screening. I felt the same way. The greatest movie was finally completed!