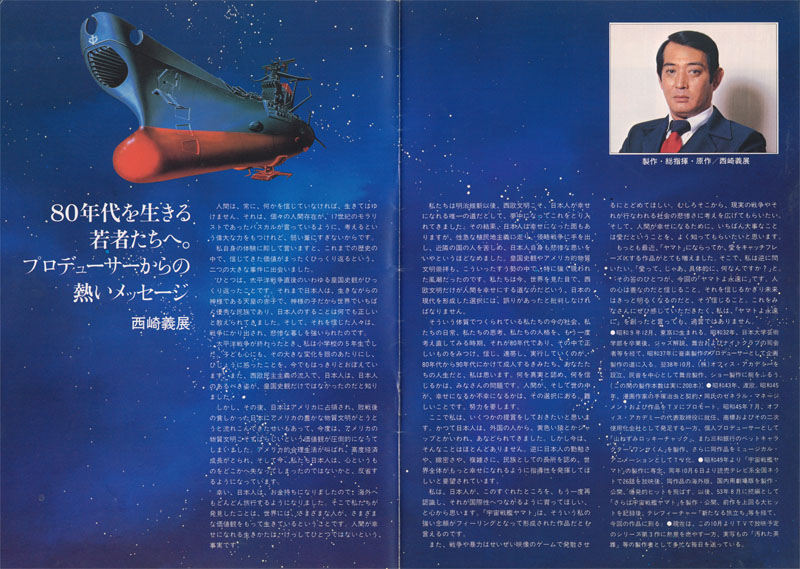 To the Young People Who Live in the 80s

A Message from the Producer, Yoshinobu Nishizaki

People cannot survive without a belief in something. It is because each individual is, as the 17th century philosopher Pascal said, “a reed, the most feeble thing in nature, but he is a thinking reed.”

In my own life, I have encountered two big events that completely overturned the values in which I believed.

Once was when the kokoku shikan was overturned just after Japan’s defeat in the Pacific War. [Japan’s view of history as an imperial nation.] Until that moment, the Japanese had been taught that they were the children of the Emperor, the living God, that they were the most superior race in the world since they were God’s children, and that everything they did was right. Those who believed in such words were driven to war and lives of misery.

When the Pacific War ended, I was a fifth-grade student. Though I was a mere child, I still vividly remember the confusion of facing this great change. Also, because of the influx of Western democracy, the Japanese learned that the kokoku shikan was not the only way of life they could follow.

However, Japan was occupied by America, and partly because the rich material culture of America flew into our poor, post-war country, a value system that praised American materialism overwhelmed Japan. American pragmatism was advocated, high economic growth was launched, and now we Japanese reflect that we lost our hearts somewhere.

Fortunately, many Japanese became rich and had more chances to travel overseas. We discovered a variety of people all over the world with a variety of value systems. The truth emerged that there is not necessarily only one way toward a happy life.

Since the Meiji Restoration, we have frantically adopted Western civilization, believing that it was the only way to find happiness. Many of us did, but on the other hand, we also rushed into an impetuous colonialism, engaged in aggressive wars, tormented people in neighboring countries and made them suffer many privations with a vengeance.

Both the kokoku shikan and the worship of American materialism were particularly strong trends that resulted from the current of the times. After looking at more of the world, we now must criticize the belief that Western civilization was the best and only way to find happiness and build modern Japan.

I believe the 80s is a time to rethink our current society, and recognize that our daily lives, our thoughts and our personalities are all based upon a worship of Western civilization. For you who will become adults in the 80s and 90s, it is your purpose to find the right beliefs, unite and carry them out. What is regarded as truth and what is a matter of belief are your concerns. You will choose whether or not the people of the world find true happiness. This is difficult. It requires effort.

Here, I would like to make some statements. Once the Japanese were berated as “yellow monkeys” or “Japs” and despised by foreign people. But now this rarely happens. On the contrary, the Japanese are respected for their diligence, fineness, and complexity. These are the good points of the race and are the qualities of leadership that can bring happiness to the world. I wholeheartedly wish that the Japanese can recognize these good points once again and develop them on an international level. It can be said that this strong desire of mine lead to the creation of Space Battleship Yamato.

A desire for war and violence should be contained within the level of visual games. I’d like you to consider the results of real war, and the suffering it places upon a society. I also wish for you to understand that love is the most important way toward happiness. However, many recent works have appeared (perhaps following Yamato) that use “love” as their catchphrase. I would like to ask “what is love, specifically?”

Since 1974, Nishizaki has dedicated himself to the production of Space Battleship Yamato, starting with the first 26-episodes series through the Yomiuri TV network. He then produced the overseas edition as well as the domestic theater edition, which became a great hit. Thereafter, he produced and released an even more popular sequel, Farewell to Yamato in August 1978. Following the telefeature The New Voyage, he began the production of this new film.

At present, while enthusiastically producing the third TV series to debut this October, he is busily producing a live-action film, Yogoreta eiyu (Dirty Hero) and many other projects. 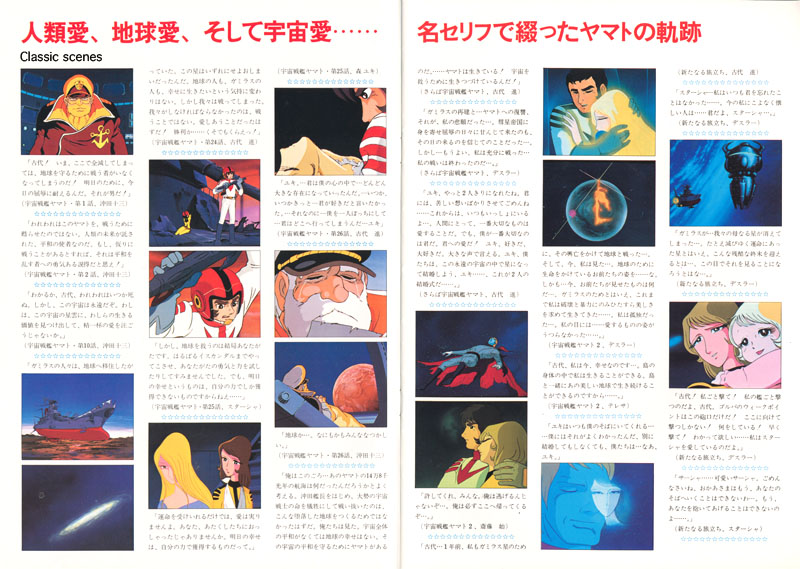 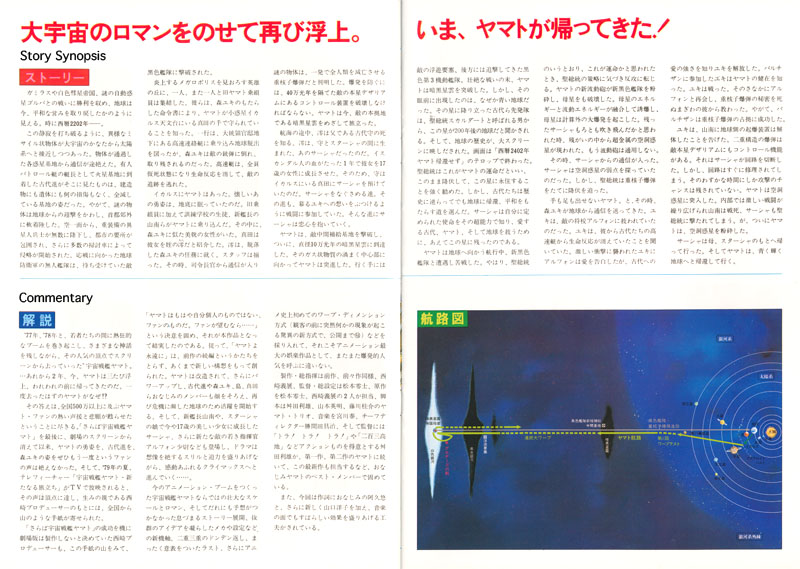 Space Battleship Yamato, which provoked great enthusiasm among young people in 1977 and 1978, left movie theaters at the peak of the boom, leaving many legends behind. Two years have passed, and now Yamato has arisen for the third time and come back to us. Why did Yamato return?

The answer is that the fervent support and desperate wishes of more than five million fans revived Yamato. Since Yamato disappeared with Farewell to Yamato, the voices from fans have never ceased. They have continually expressed their desire to see the courageous figure of Yamato again, along with Susumu Kodai and Mori Yuki. In the summer of 1979, the telefeature The New Voyage was broadcast on TV. The voices reached their greatest volume, and a mountain of letters from the entire nation reached Producer Nishizaki, the creator of Yamato.

Producer Nishizaki, who had determined not to produce another theatrical film after the success of Farewell, decided instead to create new films after seeing this tremendous response and realizing, “Yamato does not belong to me, an individual, any more. It belongs to the fans. If the fans desire it…”

His decision has materialized with this new movie. Be Forever Yamato was created based on a new concept, rather than being a sequel to the previous film. Yamato was rebuilt and became more powerful, and such familiar characters as Kodai, Yuki, Shima, and Sanada will once again take action against new danger to Planet Earth. Also, the new Captain Yamanami, Sasha, the daughter of Starsha who has grown into a beautiful seventeen year old girl, and a new young enemy commander, Second Lieutenant Alphon, join the film. The drama will move on to the exciting climax, with thrills and power beyond imagination.

The new film brings with it the great scale and romance that only Yamato could achieve. The breathtaking story is beyond imagination, and the mechanical designs and concepts are full of great ideas. The story contains one twist after another, and the final scene will surprise everyone. Moreover, the film uses the Warp Dimension method for the first time in the history of animation. This is an amazing new technique in which something suddenly happens right in front of the audience, but it will be confidential until the release of the film. By including all these exciting things, it is certain that Yamato will achieve incredible popularity once again.

As with the previous works, Yoshinobu Nishizaki is the producer and general supervisor. The original story is created by Nishizaki and Leiji Matsumoto. The script is written by the Yamato trio: Toshio Masuda, Hideaki Yamamoto, and Keisuke Fujikawa. Music is by Hiroshi Miyagawa. The chief director is Tomoharu Katsumata. Director Toshio Masuda, who is well known for such live-action films as Tora Tora Tora and Hill 203, is in charge of production, as he was in the first and second films. The best of the regular staff members also participate in the film. In addition to lyricist Yu Aku, who is already familiar to fans, the film includes Yoko Yamaguchi as another songwriter, and uses music to great effect as well. 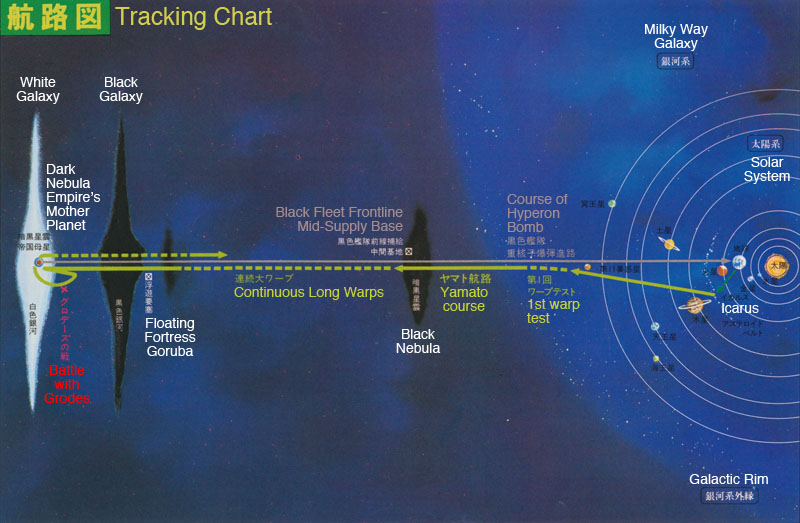