By Gwyn Campbell and Anton Kholodov; photos by Gwyn

Leiji Matsumoto, the great master of the manga world who busies himself every day and does not yet know fatigue, accelerates his media mix strategy to demonstrate that “dreams and reality are connected.” At the end of 2011 he will celebrate his 57th year as a creator, and will look back at the turbulence of his 57 year career so far while also talking about the coming future.

The event is in a two-part format. First there will be an autograph session, promotion, and product sales. The second part will be a talk show with a variety of guests from different backgrounds as they examine video and archival images from the viewpoint of otaku subculture and speak their opinions freely.

This year’s event will also feature a surprise announcement of a planned theatrical project! Leiji Matsumoto new century! Feel the beat of the countdown begin!

At left: merchandise display from Anime World Star. At right: the autograph/sketch session

Leiji Matsumoto autograph session, promotion and exhibitions by various companies including limited-edition products. A ticket lottery will be held beforehand in front of the meeting place. 30 tickets will be chosen at random. Winners will receive a signed illustration. Mr. Matsumoto will also sign designated products purchased at the venue.

Related link: the Skulldot website published a page of photos from the event that can be seen here. 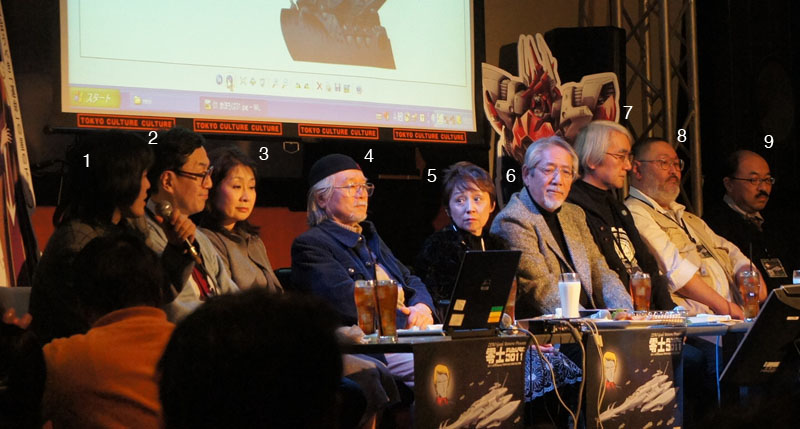 Leiji Future 2011 was held once again at the “Culture Culture” club in Odaiba, Tokyo. With limited space (approx. 90 seats), tickets had sold out literally within 30 seconds of going on sale months ago. However, there was a catch. Ticket holders had a 1-in-3 chance of winning a sketch from Leiji Matsumoto himself. As a result, many fans had snapped up more than one ticket, so by turning up on the day I was able to purchase a ticket for one of the seats that was left empty.

Compared to last year, changes in the event were immediately obvious. For starters, there were considerably fewer merchandise tables. This was done to free up as much space as possible for seating due to the announcement of a new Matsumoto production, a cardboard cutout for which took center stage: Cosmo Super Dreadnought Mahoroba. There were also cutouts of some of the main characters, as well as some sort of robot/mobile suit. (shown below) 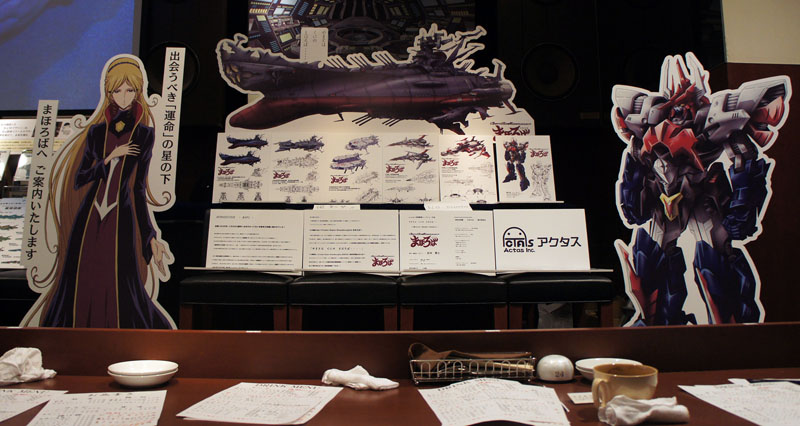 The first half of the event was the sketch and autograph session, which was largely unchanged from the previous year. The second half was the talk show, which was the main focus of the event.

After only a short break, despite having sketched dozens of pictures for over two hours, Leiji Matsumoto reentered the room to thunderous applause. The designs for the new production were there for everyone to see. It was now time to learn a bit more about what Mahoroba actually was.

Matsumoto started off by talking about his interest in manga and aircraft from a young age and how he had spent a lot of time researching airplanes, even spending time in them. Some of the ground covered here was similar to last year’s talkshow, but no one really minded all that much. Chances to hear Matsumoto speak don’t come along very often, after all.

– A Leiji World Summit will be held next July. (Read an announcement about it here.)

– A 999 train is operating in Tomioka, Gunma Prefecture.

– Producer Yoshio Takami and Matsumoto reminisced about their work at Toei Studio; discussed the process of what it took to make an animated movie back in the day.

– Leiji and Katsumi Itabashi have been working together for over forty years.

– The CG Captain Harlock movie was confirmed to still be in production (fan rumors point to a summer 2012 release?!?) 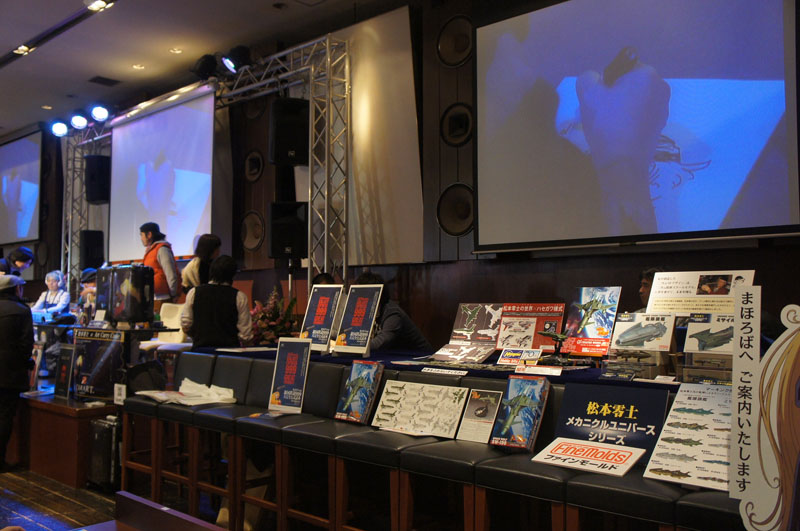 – The Staff often think that Matsumoto has some sort of aura, the way he affects the designs, etc. of those working around him.

– Matsumoto’s design policy: whether he is designing buildings or planes or spaceships, they need to be based in reality. The natural coolness of designs comes through. He actively keeps abreast of the latest technological developments and extrapolates what he thinks the future could be.

– He often wonders why new tech so closely resembles anime. When he talks to engineers/development staff they often say it’s because they were raised on anime and their real-world designs often show this influence.

– A question was put to Keiko Han (Sasha’s voice actress): is voicing foreign characters more difficult? Her answer: Only when dubbing live action because of the need to match lip movements. But with anime, nationality doesn’t affect the way she approaches a role. Especially in Matsumoto’s productions, the characters are all human, not defined by nationality.

– Cosmo Dreadnought Mahoroba will be an all-new theatrical animation. 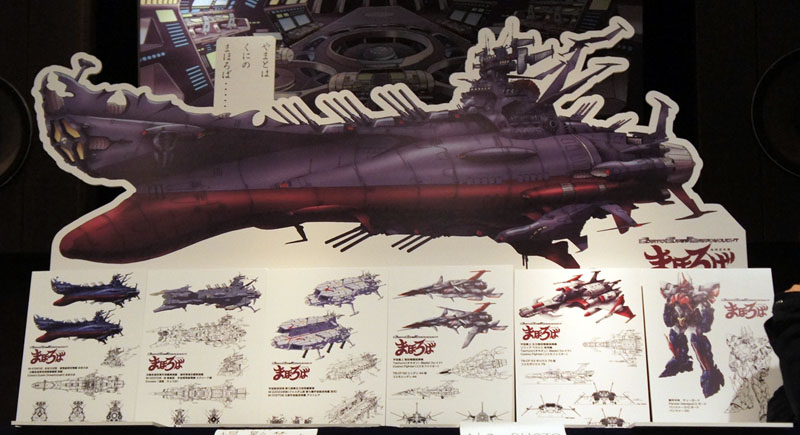 Mahoroba: the third IJN battleship after Yamato. (Not sure who said this. It wasn’t Matsumoto. Anton pointed out to me that its actually the 4th Yamato-class ship after Yamato, Musashi, and Shinano. Matsumoto corrected this point later on during the talk). Matsumoto had come up with the idea for it long ago. It was always meant to be a larger ship than the Yamato. One interpretation of Mahoroba is “Utopia,” similar to “Arcadia.” It’s a ship that fights for peoples’ right to live.

– The robot that appears in the show has an obvious 70’s flair. The aim is to mix Yamato elements with some robot elements to create something new.

– The Mahoroba has four catapults. It can be inferred that the ship is approximately twice the size of Yamato. 100,000 tonne class. Yamato was 60,000 tonne class. Further discussion compared Mahoroba to the original Yamato and the much larger Great Yamato to give the audience a better idea of size and scale.

– The Captain’s design is rather different. Matsumoto said he didn’t want the design to be too similar to past captains.

– Mahoroba is currently targeting a 2013 release window, but nothing is official or set in stone at this point. 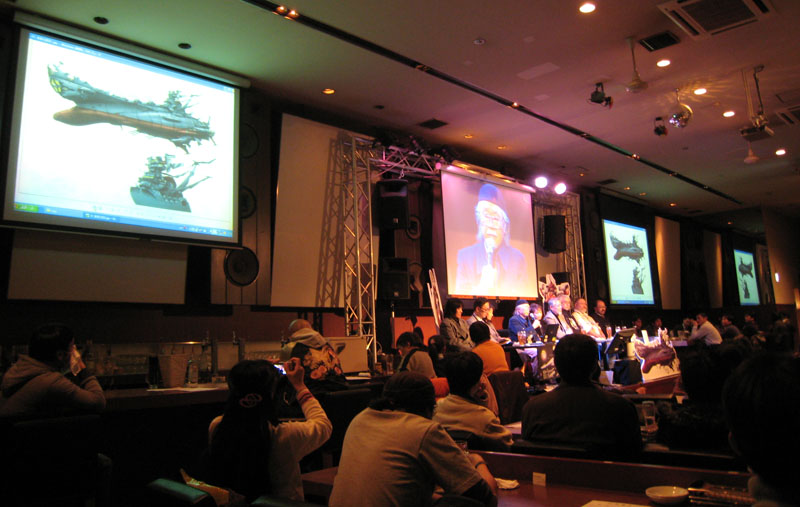 This time we concentrated on a new movie from Matsumoto: Super Cosmo Dreadnought Mahoroba. Matsumoto already did a manga about it, but this movie doesn’t have anything even close to it. It’s another effort like Great Yamato or Dai Yamato Zero-Go. And this one could be really good.

So what do we actually have? It’s simple. Many new characters with a unique design, all “golden” crew, Scandinavian gods like in Harlock, a few villains from Galaxy Express/Maetel legend, a new design of Yamato (sorry, Mahoroba) – now it’s 500 meters long, Cosmo Zero, Andromeda, etc. Danguard-type robot on board.

What else? Could you imagine that the famous Space Wolf Admiral Domel would fight against evil on board Yamato (who are they going to fool?) with Kodai, Yuki, Sanada and Captain Okita? It’s possible. They didn’t even change his name! It’s simply the original character from Yamato! I like it. If they make it, it will be the Mount Everest of Retro-Futurism.

During the talk show I took photos of the new art (actually they were prohibited) while Gwyn made notes like “This time Andromeda has three DAMN wave-motion guns!”

I also bought a ticket to a Katsumi Itabashi exhibition/show on the 22nd of January. As I understood it, Itabashi did mecha designs for Mahoroba, so it must be interesting.

Naturally, online reporting about Mahoroba spread quickly right after the announcement with lots of rampant speculation. For example:

Anime Kritik‘s blog: “Leiji Matsumoto is Going For It”

More merchandise: a promo flyer for Galaxy Express 999 Great Chronicle, a book by Matsumoto and Hideaki Ito,
scheduled for publication in late 2012. At right: a Galaxy Express “art case.”

There was a corroborating eyewitness account on a Japanese website called Leiji Matsumoto Encyclopedia that keeps track of these things. Here’s what that writer had to say:

The anime movie Super Dimension Battleship Mahoroba will be released in 2013. This was announced Sunday Dec 18 at Leiji Future 2011. It will not depict activity on Earth as seen in the original manga, but will use outer space as the stage. Mahoroba is not an independent ship, but participates in a naval fleet from many participating nations. It seems the opponents will be Darqueen and the Metanoid forces. Some designs were displayed at the meeting place.

Superior is a battleship of Earth Union Army, looks like Andromeda with three wave-motion guns. Cosmo Shinden seems to be in the style of a Cosmo Zero. Red and white Cosmo Galius looks like a combination of the Star Claw from Starzinger and a Black Tiger. Astoria is similar to the carrier ship Diva of Gundam AGE.

There is a character like General Domel named Domel Jr. The robot D Guard’s face seems like Danguard A + Mazinkaizer + Anubis. The body seems based on Danguard A with the irregular style of Gaogaigar or Zeoraimer from the 90s. 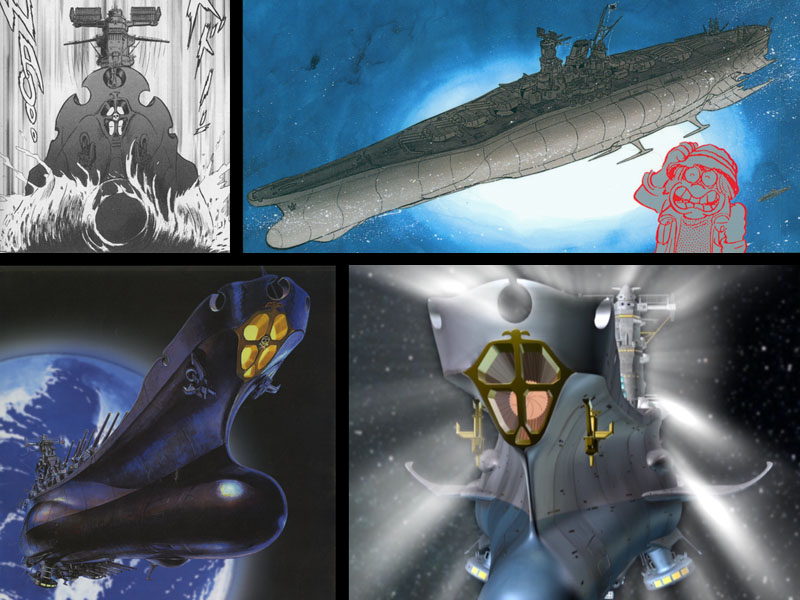 So far, this is the sum total of all the Mahoroba information that has been made public. Plenty of Matsumoto projects have been announced over the last decade that didn’t go anywhere, like the Zero Desigze project he was touting in late 2010. But the sheer volume of finished design work for this one suggests that a major commitment has been made, so we’ll all have to follow this closely. 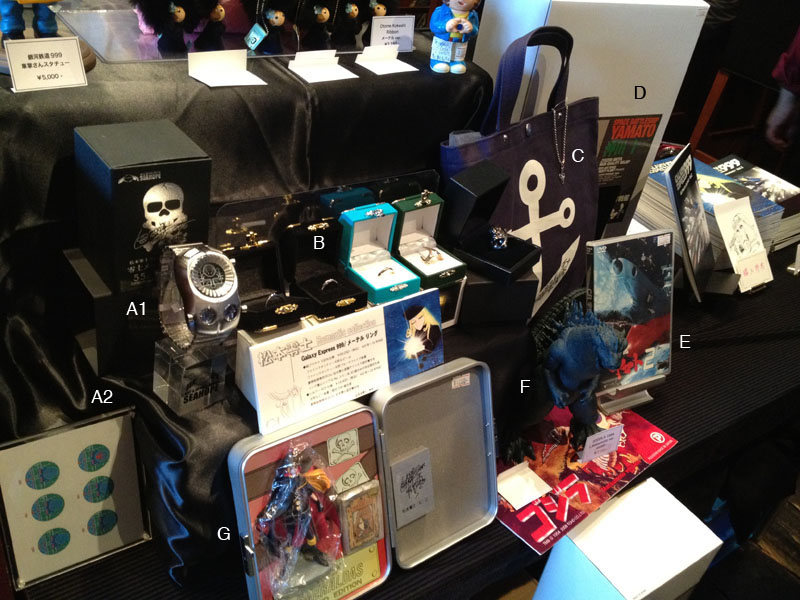