As summer gave way to fall, Yamato‘s fortunes just kept on climbing. The initial theatrical engagements ended just before September started, but far more theaters were picking the movie up than were letting it go. 33 more in September, and 39 in October, an unprecedented increase in demand. Media attention widened and deepened as it became increasingly obvious that Yamato had evolved from fad to phenom and was here to stay. This new flyer preceded the film wherever it went, upgraded from the summer version to include the actual one-sheet on the front. The back was mainly the same except for the bottom portion, where promotion for novels and the LP record was replaced by new ads for an official Yamato fan club and a 1978 Yamato calendar.

For a mere 1600 yen a year, charter fan club members were promised priority information, the lending of production materials (art, cels, etc.), priority access to events, and discounts on merch. It was also indicated that membership cards and an official magazine were in the works. (The first issue would be published the following February.)

With that offer pointing the way to an even brighter future, here’s what kept fans excited in the film’s gigantic wake… Let’s start September 1977 with a bang, shall we? This is almost certainly the first mention anywhere in American print media of Yamato in English. It was a single paragraph in an article about animated “kid vid” that mentioned a syndicator named Modern Programs Incorporated. This name didn’t appear on Star Blazers, so it was either a stepping stone in that direction, or an interim company that held the rights before Westchester Corporation stepped in. Either way, it represents the first bridge for the Yamato TV series to the English speaking world, earlier than previously expected.

Thanks to the global circulation of the Yamato movie (under the Space Cruiser title), more mentions in English-language media would emerge in 1978. For now, click here to read the Starlog article in full.

Click here for an extensive online archive of Starlog magazines. Since the movie was a surprise blockbuster, there wasn’t a great deal of merchandising to be had in the month of its premiere. But there was just enough time to upgrade the ad for the 3-volume novelization with film-related imagery (above right). You had to look hard in this issue to find the Yamato content, because there wasn’t much of it; just two excerpts from the mail bag and a pair of rather tepid reviews from critics. To be fair, the reviews reflect what many first-generation fans were thinking; the movie was a good introduction to Yamato, but the heart of the story lay in the TV series. This 16-pager was a grab-bag of production art, fan art, and yet another primer for the story, created by a group calling themselves TAC (Terebi Anime Club). This one doesn’t stand out visually from other doujinshis of the time, but it’s a genuine goldmine that deserves special recognition. Its author Kaoru Saito somehow gained access to the inner circle – producer Yoshinobu Nishizaki and most of the primary voice actors – and obtained interviews that would soon become the sole province of mainstream publishers.

There is information in these discussions that would never be repeated elsewhere. The text was not professionally polished, but the content is exceptional; here we see Nishizaki at his most unguarded, making statements far too candid for the public record. It was also the first time anyone interviewed the voice actors, a pop culture deficit that was about to change in a major way.

All that and more makes this doujinshi one for the history books, a permanent record of the first and only time a fan writer made it all the way to Iscandar.

Read it from cover to cover here. When the intelligentsia comes knocking, you know you’ve made an impact. Yamato was big enough to catch the attention of Weekly Bunshun, a literary magazine from a publisher named Bungeishunju Ltd. Naturally, a Bunshun journalist would bring different questions to an interview than a news reporter, which makes this 1977 interview with exec producer Yoshinobu Nishizaki a uniquely insightful piece of the Yamato puzzle. One week later, we got another Nishizaki interview for the history books. This one reveals intricate details of Yamato‘s rise to fame that were never published elsewhere. The discussion is as candid and penetrating as any Nishizaki interview that would follow, but this portrait of his first brush with success is truly special.

This issue of Heibon Punch is an elusive one, and a physical copy has yet to be found. But based on the excerpts that have appeared since then, the article inside is well worth the search:

The appeal of animation is that it stimulates the imagination and liberates the mind to a different world. Today is the age of fantasy, and animation is the new medicine for this fantasy generation.

Yukio Shiraishi of Major Enterprise, who was in charge of publicity, seemed to be troubled by the prejudice of the mass media. He said, “The media called us to inquire about the film, and as soon as I said that it was animated, they would hang up. There were a lot of cases like that, so I was very anxious.”

Once this issue has been obtained, a full translation of the article will be produced with all deliberate speed. 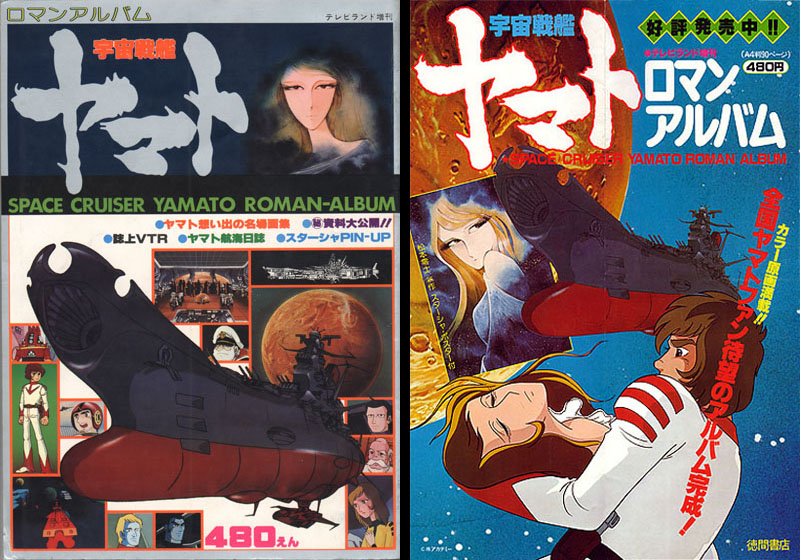 Just as the Yamato movie is responsible for anime going mainstream, this publication represents the launch of anime book publishing. Like the film, it broke through the prevailing opinion that children were the only consumers of anime. The turning point could be found within the pages of the book itself, which started with the basic design of a kid’s book (large art images with minimal text) and evolved into a mature fan’s dream, page after page of pristine model sheets and broadcast data.

The cue for this was obviously taken from OUT magazine’s historic 2nd issue (published in April) which showed exactly what fans wanted to see – because fans themselves had created it. And Tokuma Shoten was handsomely rewarded for paying attention; Roman Album #1 went through six printings in its first month alone. What started out as a one-shot spinoff of Tokuma’s Terebiland magazine became their signature creation as subsequent volumes set new standards for years to come. Yamato had the outward appearance of a story for men and boys, but it was also true that the majority of its fandom in the early years was female. So when a girl’s magazine set out to write their Yamato article, they followed in the footsteps of OUT magazine and got female fans to write it for them. The content came from a contemporary Yamato fan club and laid out a case for why girls would enjoy seeing the movie too. Derived from Sankei Sports newspaper, Weekly Sankei gathered up sports and entertainment news in a gossip-style format. In this issue, Yoshinobu Nishizaki delivered another interview at the peak of his early success, and revealed things you would only find in a gossip magazine. 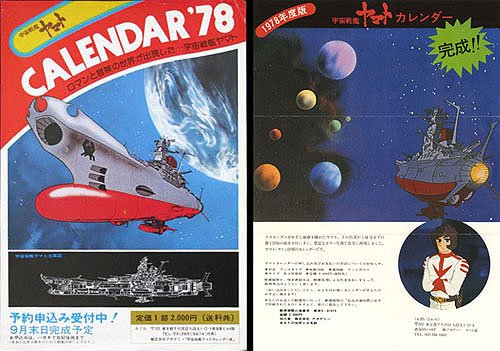 The exact date of publication is unknown, but fans could put this calendar to immediate use, since it actually began with October 1977 as its first month. Each month is peppered with stills from events that ostensibly happen on specific days, though the ‘timeline’ this represents varies pretty substantially from the official dates for the TV series itself. (For one thing, the calendar has Yamato returning to Earth about three weeks early.) But this takes nothing away from what must have been a fan’s dream in terms of big, colorful iconic images from the animation.

Click here to examine this calendar from front to back. After the huge Yamato feature in the September issue (published in July), the October issue focused on other things. This was the issue in which Yamato made its return, and anime coverage would be a mainstay from here on out. The article herein was exactly the kind of thing OUT would become known for, giving a platform to fans in the form of a conversation about Yamato and their own club activities. It had been a year since Isao Sasaki’s first all-anime theme album, and the Yamato boom made it high time for a followup. This disc contained some crossover, but it was the first all-Sasaki album to feature both the OP and ED themes, and the first one to put the word “anime” on its cover. In a month of outstanding publications, both amateur and professional, this one was another prizewinner. Clocking in at a prodigious 152 pages, it was the most extensive collection of character and mecha designs anyone had yet collected between two covers. Published by “Group Zero,” it offered material that hadn’t yet been seen elsewhere, and wouldn’t be seen again until the Academy hardcover books arrived in June 1978.

See it from cover to cover at the doujinshi archive here.

Newswatch: Headlines and highlights for September

For the sake of posterity, all of the press and magazine coverage for the Yamato movie was indexed in Office Academy’s Space Battleship Yamato Complete Records books (commonly known as the “silver set”). This allows us to see how newspapers and magazines reacted to the emerging phenomenon, which must have seemed to come out of nowhere. Here are headlines and highlights from that index.

A space anime masterpiece that will bring an explosive boom to young people!
Movie Fan, September 1

A dream that cannot be found in reality – roman – in search of love, the manga generation is dazzled by Space Battleship Yamato
Asahi Shimbun, September 1

Through the fierce battle, the film aims to make people reflect on “love” from a broader perspective.
Senior High 1st Course, September 1

The world of Leiji Matsumoto is a world of compassion for the adolescent who cannot become an adult. Space Battleship Yamato is a hit with high school girls.
Senior High 2nd Course, September 1

Nichan was inundated with postcards from young readers wishing for the re-airing of Yamato on TV.
Tokushima Shimbun, September 4

Producer Yoshinobu Nishizaki producer calls Yamato a product of his desire. It is precisely at a time when life is in a slump and the desire for a better world is rising in everyone’s hearts.

“By depicting the activities of young people who are determined to stand up to the crises of Earth, I hope to give dreams and recognition to boys, girls, and adults that will truly nourish their lives. This idea and the dream I had as a boy were combined to create Yamato.”

Two months into its life in the mainstream, Yamato still rivets the attention of fans and media alike, both seemingly in a race to outdo each other. See where they took it from here in Vintage Report 7!