The ending of Yamato III‘s broadcast! However, a new Yamato journey has begun!!

The launch of Space Battleship Yamato: the Final Chapter 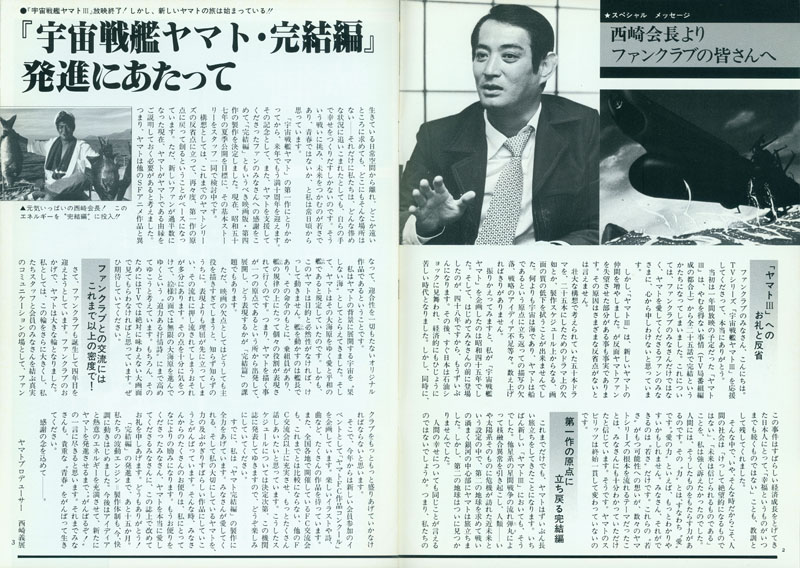 Thanks and Reflection on Yamato III

Hello to everyone in the fan club. Thank you very much for your support of the TV series Space Battleship Yamato III. At the beginning, Yamato III was scheduled to broadcast for one year, but due to unavoidable circumstances (on account of TV station programming) it concluded with Episode 25. I am sincerely sorry about this not only to everyone in the fan club, but also to every fan who loves Yamato.

Yamato III increased the new friends of Yamato. But on the other hand, there is a part that frustrated Yamato fans. There are various points to reflect upon. 50 stories were conceived in a grand vision, but with the word on high to cut the episode count to 25, there was no way to prevent the quality from suffering. Above all, space is an ocean, and there was an omission of Yamato returning to its origins as a ship, and a lack of ideas about strategy. The list could go on.

When I look back, it was in 1970 that I planned Space Battleship Yamato, and much had changed when it finally appeared before everyone in 1974. Japan was hit by an oil shock immediately afterward, and it was a very difficult time economically. However, for the Japanese who had accomplished wonderful economic growth, it was a lesson that “happiness doesn’t last forever.”

Under such circumstances–no, precisely because of such a time–human society “does not become hopeless,” and I wanted to strongly appeal to “belief in the future.” Human beings have power to bring about such things. In other words, “power” is “love.” Calling it “the power of love” may be clearer.

Everyone, it can only be “youth.” Thoughts about the potential of “youth” has been the theme that flows through the many stories in the Yamato series, and I believe you can understand it enough. That’s right. Through thick and thin, the spirit of Yamato does not change. 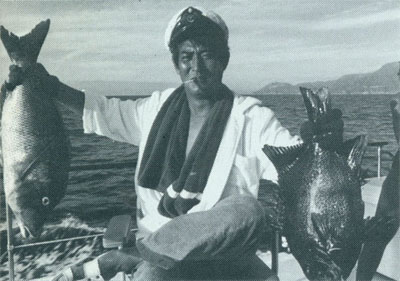 The energetic Chairman Nishizaki!
This energy will be put into The Final Chapter!!

Up to now, Yamato has been on a very long voyage. It was so even in the newest story, Yamato III. A stray shot from an open war between two star systems caused abnormal nuclear fusion on the sun, and in the setting of the near future, a crisis threatened the human race and the solar system itself. Yamato launched for the center of the galaxy, caught up in the swirl of war, to seek a second Earth. However, the second planet was not found after all. We could say the same thing about the happiness of human beings.

In other words, away from the sky that eavesdrops on the everyday lives we live, even if we search in some distant place but cannot find such a place anywhere–and if we therefore are forced into an even more miserable situation, we have no choice but to create happiness with our own hands. I have always thought that fighting such a challenge and grasping for the future is the way of youth.

Next year will already be the tenth anniversary since starting the first work of Space Battleship Yamato. To commemorate my gratitude to all the fans who gave their support to Yamato, I have decided to produce a movie version of the fourth work which will be called The Final Chapter. With the goal of a summer 1982 exhibition, the basic story is being considered by everyone on the staff. As a concept, it stands on the point of reflection for the entire Yamato series, and its basis will be to return to the origin of the first work. However, now that the majority of the fans are new, I think it is necessary to explain why Yamato is Yamato. In other words, Yamato is unlike other SF anime works in that it is an original work that does not pander at all.

I developed the setting of Yamato with space as an “endless ocean.” It was specified that Yamato is a ship of love and peace that crosses this ocean. Moreover, Yamato never moves without a purpose or necessity. The ship moves on the basis of the captain’s orders, the crew stands on the rules of the ship, and individual roles are expressed. Namely, it begins from Yamato‘s point of origin, and how to express it unfolding from there is the problem of The Final Chapter.

However, the bad point of a movie is when the leading role inevitably draws too much attention, and if the intention is not known in advance, the fear is that it can be swept away in the flow. Bearing this point in mind, my thought was to build up the production as an “intense, epic romance” that proceeded through an infinite ocean. Of course, I think it must bring something to the big screen that you could never taste on TV. Please look forward to it.

Fan club interaction will be heavier than ever!

By the way, the fan club is about to enter the fourth year since it began. Thanks to the fan club, Yamato has become a big circle. As for me, to further increase this circle, I think we must increase the fan club more and more as a forum of true communication that connects our staff to our members.

Therefore, as a new event for member participation this year, I am planning a “Yamato Fan Club Gathering.” We are waiting for your many works, such as enjoyable illustrations, poems, songs, etc. Also, I want to talk a lot more, so we will expand fan club exchange meetings all over the country, incomparable to other meetings held before now. We will announce the schedule here in this magazine as soon as it is decided, so please look forward to it.

I have already made every possible commitment for the production of Yamato The Final Chapter. For everyone like me who loves and cherishes Yamato, I am trying hard to make it as great a work as I can. When I get letters from all of you, it is more encouraging to me than anything else. To everyone who has sent in a letter and to everyone who truly loves Yamato, I would like to thank you once again in this magazine. Thank you very much!

It is another 15 months to the launch of The Final Chapter. Our Wave-Motion Engine = production system has begun to work smoothly. From now on, the energy of ideas and zeal is at full capacity, and when I think of starting a new Yamato, it comes down to one word: Ganbare! [“Give it your best!”]

Everyone, please do your best to live your precious “youth.”

With a feeling of gratitude, 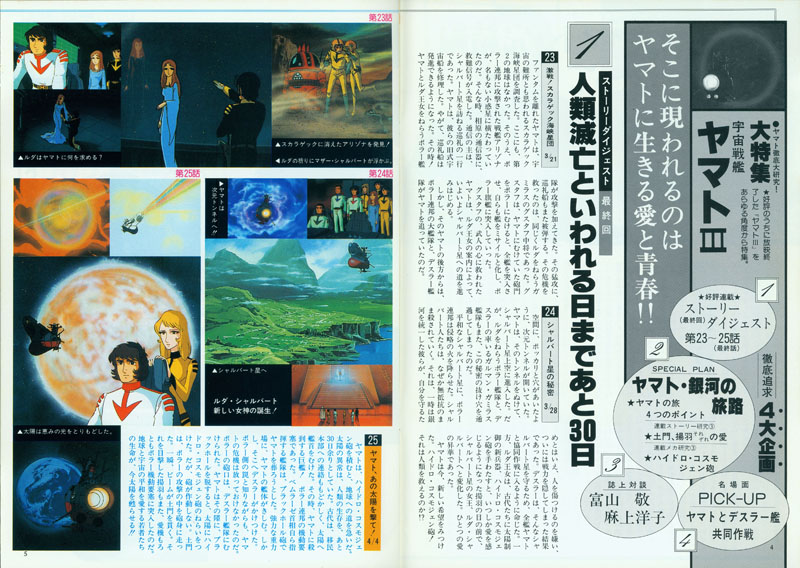 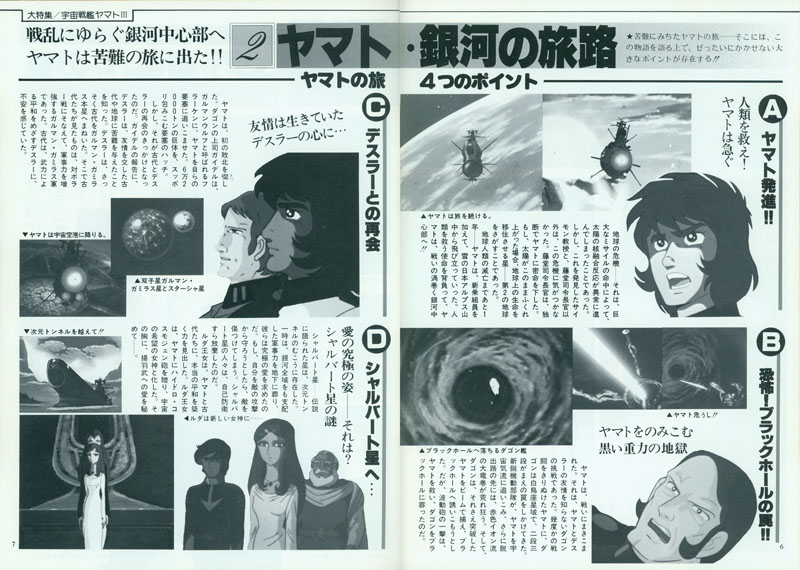 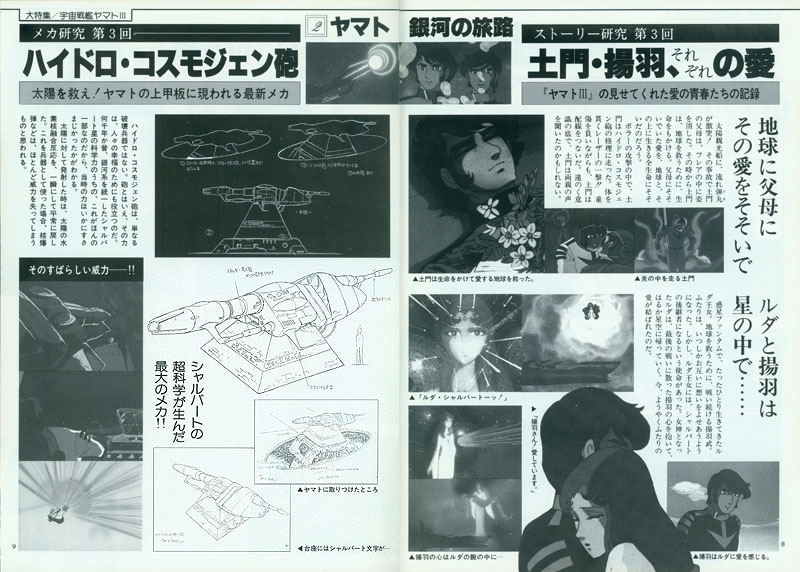 Story Research: the fate of Domon and Ageha, the Hydro Cosmogen 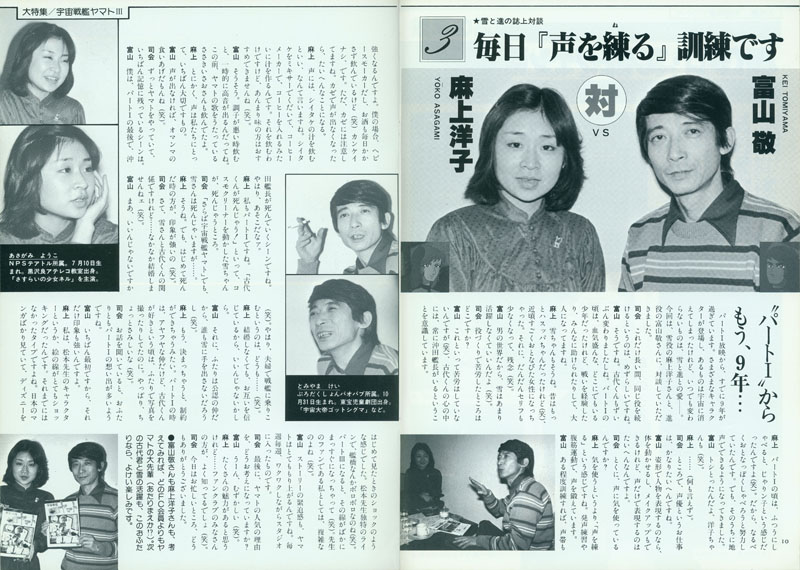 Interview with Yuki and Kodai

Training that “works out” the voice every day

Nine years have already passed since the broadcast of Part 1. Although various characters have appeared and some have disappeared into space, one thing that never changes is the love of Yuki and Kodai. Here, we talk to Yoko Asagami in the role of Yuki and Kei Tomiyama in the role of Kodai.

Host: It is a new thing to have continued in the same role for such a long time.

Tomiyama: That’s right. Kodai has changed a lot. In the days of Part 1, he was a hot-blooded boy who was everywhere, and after experiencing battle and being helped by everyone, he has grown up.

Asagami: It’s the same for Yuki. She was more precocious in the old days, but she’s recently become a very grown-up woman. Unfortunately, my number of lines has gradually decreased. (Laughs)

Tomiyama: It’s a man’s world, so Yuki doesn’t need to do much. (Laughs)

Host: In what area did you have a hard time with the role?

Tomiyama: I didn’t have a particularly hard time (laughs). I am always aware that Captain Okita is in Kodai’s heart.

Asagami: During the days of Part 1, my normal speaking voice had a childlike feeling. Therefore, I made an effort to talk like an adult as much as possible. Before long, I was able to make it my natural voice.

Host: By the way, the work of a voice actor is quite serious.

Tomiyama: If I’m expressing myself to another person I can move my body. It’s hard to express things only with your voice, though a redo is possible.

Host: What do you do in particular to care for your voice?

Asagami: Rather than caring for it, I feel like “working out” my voice. I train my voice by speaking while doing abdominal exercises.

Tomiyama: The vocal chords can become stronger if you train them. In my case, I’m a heavy smoker and I drink sake every day of the week. (Laughs) But I’m careful about colds. It’s serious if I lose my voice to a cold.

Asagami: I drink shiitake juice to keep my voice. I crush shiitake with a mixer, and make it into soup like coffee in a coffee maker. I drink it, but I can’t recommend the taste very much. (Laughs)

Tomiyama: That’s right. If I drink when I’m out of condition, my voice becomes more high-pitched. Even Isao Sasaki, who sang the song of Yamato, also drinks.

Asagami: Anyway, the voice is the most important thing for us.

Tomiyama: Without our voices, we couldn’t earn our next meal. (Laughs)

Host: Which scene from Yamato is most memorable to you?

Tomiyama: For me it was the scene where Okita dies at the end of Part 1. Yeah, it’s gotta be there.

Asagami: It’s Part 1 for me, too. Yuki says “Kodai will die!” and runs to the Cosmo Cleaner where she died.

Asagami: Sure. But death makes a stronger impression the first time around. (Laughs)

Host: Even though there is the relationship between Yuki and Kodai…they still haven’t gotten married. (laughs)

Tomiyama: But isn’t that a good thing? (Laughs) After all, I’m thankful that a couple could board a battleship…(Laughs)

Asagami: Isn’t it a good thing that they can believe in each other even if they don’t get married?

Tomiyama: Besides, since they are people who follow regulations, I can’t lay a hand on Yuki. (Laughs)

Asagami: They seem to want to follow restrictions. But in Part 1 it was an uncertain relationship, like the time Kodai took a photo of the two of them. After all, I was a bit lonely. (Laughs)

Host: It seems you both have many memories of Part 1.

Tomiyama: Because it was the very beginning, it had a much stronger impression.

Asagami: The art and characters of Mr. Matsumoto were very surprising. There was nothing like it before then. I had only looked at Japanese manga, and it was as surprising to me as when I saw Disney for the first time. The art of the bridge deck in particular had the battered look that was unique to Mr. Matsumoto. The art became very smooth when it got to Part III. It’s complicated for me, since I am a fan of his. (Laughs)

Tomiyama: The story’s sense of urgency in Yamato increased very much. I entered the studio with excitement every week.

Host: Finally, what do you think is the reason for Yamato‘s popularity?

Asagami: I think it has many charms…everyone in the fan club knows this well. (Laughs)

Host: Thank you very much for spending time with us today.

Kei Tomiyama and Yoko Asagami are great celebrities to any member of the Yamato Fan Club (of course!), and we look forward to the next adventure of Kodai and Yuki. 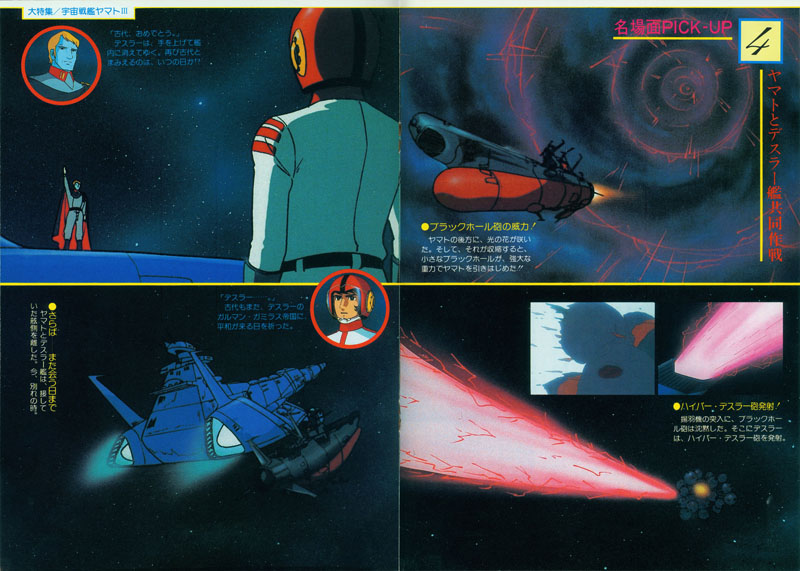