But with the new year came an abrupt acceleration when the writing team powered up the Wave-Motion Engine again. And this time, the flywheel stayed spinning. A three-day story summit with the entire preproduction team was set for the end of January, and materials had to be refreshed beforehand. Writer Aritsune Toyota took the lead with the text shown here. 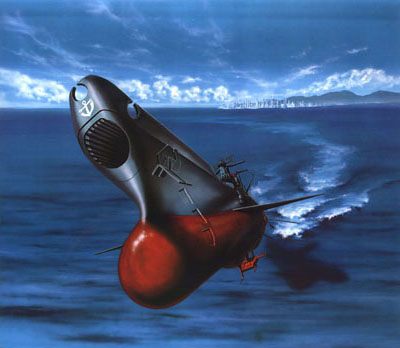 • An Earth fleet returns from an expedition and suddenly attacks Yamato. They scream, “we’ll kill you!” at Yamato. The cause of this was an accidental appearance of charged particles in the vicinity of Earth that turned Earthlings murderous by boosting their killer instinct.

• The Queen of the Water advises on a way to save the Earth. They must travel to Aquarius and gather elementary particles called Minus Quarks. The rogue Earth fleet chases after Yamato to Aquarius.

• While on patrol, Yamato intercepts a strange tone that causes interference. It is an SOS from an Earth colony on the seventh planet of Vega.

• The flagship Tegucigalpa of the Eldorado Federation of Earth demands that a ransom be paid for the people of Vega.

• While Yamato rushes to get there, a lower-rank member of Tegucigalpa‘s crew goes on a wild rampage at a bar.

• There is a big problem developing among members of the space force. Battles often break out and many die. Peaceful members have become alienated. Hearts are hardened, leading to extortion, racketeering, and murder.

• It is the same for the crew of Yamato. They even lose their goal for a time of peace. Kodai escapes from reality through addiction to his love of Yuki.

• Kodai visits the cultural center of the ministry of space and is reunited with Okita, who has been revived as a clone. Only the noble Captain Okita can correct the rampant corruption in the space forces.

• Kodai, Yuki and the rest of the Yamato crew gather in a bar which has become their regular haunt. Some of the subordinates indulge in drugs and are in a wasteful mood.

• Okita brings news of a rebellion in the space forces. Most of the fleet has escaped Earth and is heading for the edge of the galaxy.

• Aquarius is approaching Earth for the first time in 4 billion years. Aquarius sends to Earth the mysterious tone that Yamato heard before. Like the siren Lorelei, it called out to other ships from Earth and they left to investigate. Kodai is appointed to the pursuit.

• The banner of revolt has been raised on Earth, and a time of war between Yamato and the space forces is coming. For Yamato, it is like a war against oneself. 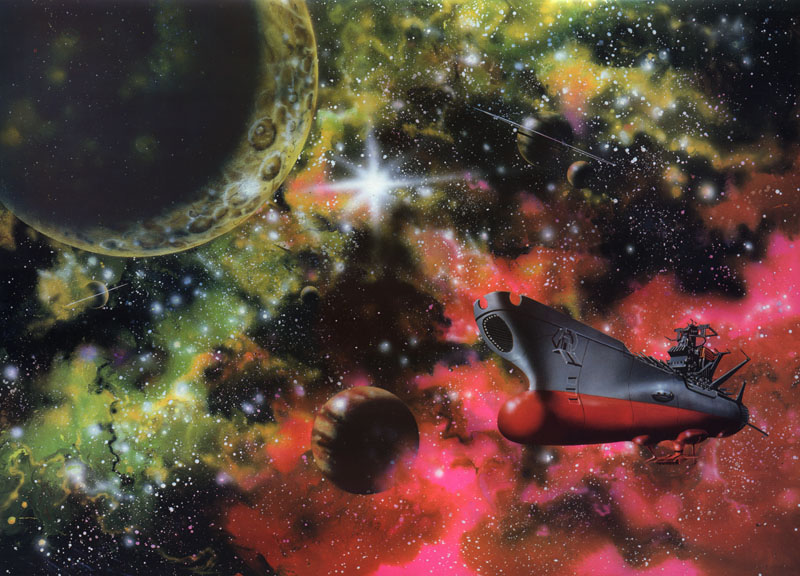 • Yamato has fought against many enemies. In the shadow of that glory were many dropouts. Ships of Earth’s space forces are withdrawing from the front, refusing missions, and even deserting in the face of the enemy.

• Planet Vulcan is located in the Perseus star cluster, 7,340 light years from Earth. Vulcan is a planet in name only, orbiting a hot young star and not yet generating any form of life. It is a barren wasteland of sterile craters and blowing sand, smoke and miasma, an environment without water where no human can live. However, its mineral resources are inexhaustible.

• It is also a place for those who have drifted away from life on Earth. Miners, deserters, and outlaws have gathered here.

• Three people in particular bear an intense grudge against Earth and Yamato. Captain Huaynacapac is the former commander of the Orion outer-reaches patrol who once arrived late at the site of a decisive battle and left the battle line in defiance of orders. He is convinced thatYamato monopolized all the success.

[Translator’s note: this character was named after a 15th-century Incan Emperor]

Another is Admiral Gelden. He indulged in his love for a woman and was expelled from Earth because of delayed departure of his voyage. And the third is the former scientist Professor Kuroki who underestimated the threat of a solar supernova [in Yamato III] and was banished from Earth for the crime that lead to the solar crisis. He wants to bring water to Vulcan and change it into fertile green fields.

• While on patrol, Yamato discovers Aquarius, a huge mass of water that orbits the galaxy every 4 billion years. They hear mysterious music and discover it is the language of Aquarius. Each scale expresses a vowel, and the meaning changes with combinations of chords that rise and fall several times. With this, the Queen of Aquarius issues a warning that Earth will be flooded. Yamato departs.

• The three people on Vulcan develop a new form of armor to attack Yamato. It is made of a hyper metal laced with uranium that can only be made on Vulcan. They engage and damage Yamato, and the Vulcans gain confidence.

• The three people also know that Aquarius is approaching Earth. Dr. Kuroki in particular wants to obtain water. Therefore, an aqua-teleporter is devised for this purpose, a device which will obtain water from Aquarius.

• The Vulcans take control of Aquarius and capture the queen.

• Water is transported from Aquarius to Vulcan, and turns it green and fertile. After their two victories, the three leaders burn for revenge against Yamato and Earth.

• A part of the water mass wraps itself around Yamato, allowing it fight on equal footing against the Vulcans. The Vulcan fleet is defeated.

• The large water mass of Aquarius surrounds the Earth and showers it with rain.

• The water obtained by Vulcan begins to change. The heavy water flows through the planet’s crust into the core where it is superheated into heavy water 3 (Tritium).

• The tritium turns Vulcan into a huge hydrogen bomb that explodes.

• Most of the Earth is flooded and Aquarius moves on. The love of Kodai and Yuki remains, and they will become the new Adam and Eve of Earth. 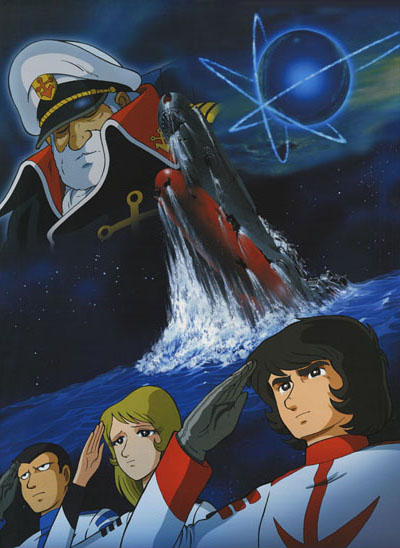 Something else that was needed prior to the story summit was a primer for the other team members that would set out a common agenda. Toyota drafted this as well, which was the first document to articulate the intended theme of the film (though that too would undergo significant change).

Story Composition/Tentative plan for the script

1. The following SF concepts are set in stone going forward:

A watery galaxy called Aquarius migrates through space. It consists of many water planets. It passed our galaxy before, when the Earth did not yet have any water (approximately 4.5 billion years ago) and water was deposited from another planet as it skimmed past. This water already contained a source of life at the time, and from there evolved single-celled organisms, bacteria, vertebrates, and finally humans.

A legend which was handed down among the people of Earth is in fact true. 4 billion years after its first pass, Aquarius comes again in the 23rd century. It will pass through our galaxy and once again skim close to Earth. When that happens, more water will arrive and drown every continent on Earth in a flood crisis.

The central planet of the Aquarius galaxy was the lifespring of Earth, and evolution happened at about the same rate, so humans from Earth and the people of space have common roots. They are lead by a single queen and have a spiritual civilization that Earthlings idealize. This water planet (together with its beautiful galaxy of water), has enormous energy since nuclear power is generated from burning hydrogen atoms in water.

2. The next concept is a powerful enemy.

The enemy this time is a human from Earth turned evil. In this case, Earthlings left the planet several hundred (or thousand) light years away. They established an empire like Hitler’s Germany and decided to attack Earth by taking advantage of the Aquarius galaxy’s visit. How they conduct this attack can be decided later. Yamato is mobilized to seek help from Aquarius to control this empire.

3. The theme is as follows:

A: Yamato discovers that Aquarius is a utopia, forgotten by humans as a result of rapid evolution, and that it is necessary for humans to evolve further. (Details to be decided later.)

B: When this is discovered (by Kodai, Yuki, and the others), Yamato reaches the end of its last mission. Whether it explodes or sinks into the water, we need a majestic scene that will make you cry, with everyone saluting as Yamato solemnly disappears. 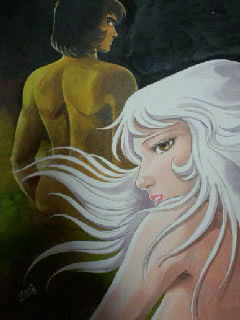 C: Since all this is to be the final work, we should consider a scene that shows Kodai and Yuki having sex, a fundamentally beautiful depiction of sexual activity. This is something else that should move the audience to tears.

D: Through these things, we should present the theme of “the child surpassing the parents.”

A: Okita is revived as the captain of the ship. Reasons for how he could be alive after death to be considered later.

B: We do not necessarily have to include Dessler.

(a) The Earth side

(b) The powerful enemy (Germany with ultra-radical mechanisms)

Three separate designs (one based on beauty and mystery, the other with mecha based on nostalgia for WWI and WWII).

Abundant ideas and a tempo like Raiders of the Lost Ark is desired.