Otona means ‘Adult’ in Japanese, but the title Adult Anime doesn’t have the same connotation there as it does here. It simply refers to anime for older viewers. This digest-sized magazine debuted in July 2006 and is published on an irregular schedule by Ocean Spring Co. Volume 28 appeared on March 27, 2013 with a 12-page article on Yamato 2199 that reviews the basics of the story and includes an interview with mecha designer Junichiro Tamamori. 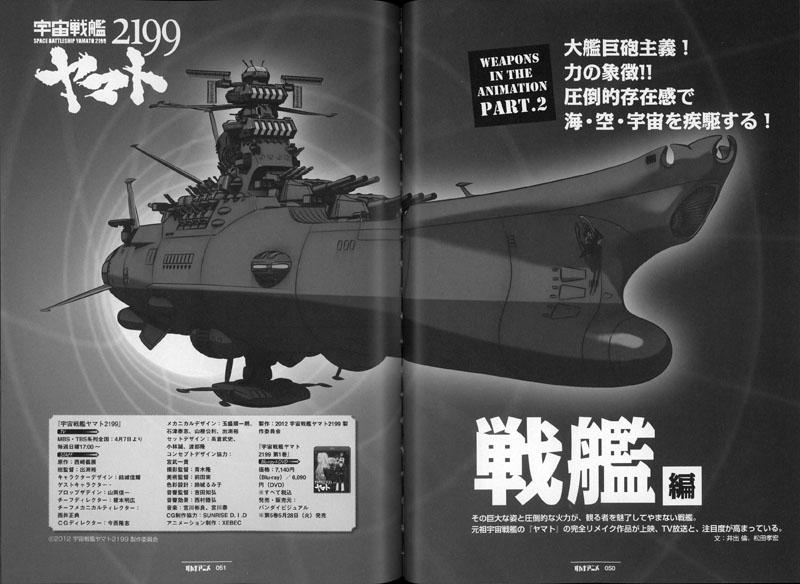 “I consider this to be space machinery rather than existing machinery”

In Yamato 2199, Junichiro Tamamori is mainly responsible for the mechanical design and detailed-up illustration for the Earth side. We talk with a member of the pure Yamato generation that received the impact of space Battleship Yamato.

Interviewer: First of all, please tell me about your previous activity.

Tamamori: As an industrial designer in Tokyo, I was involved in the design of specially-equipped vehicles, such as dump trucks and cement mixers. Then, when I came back to my hometown afterward, I became an instructor at a school of vocational design, and while I got involved with information design systems on the web, little by little I began working as a mecha designer from about ten years ago. I shifted from “physical things” to “invisible things” to designing “fantasy things.”

Interviewer: Concerning your love of mecha, what work (not limited to media) or experience inspired you to draw mecha?

Tamamori: I liked fantasy mecha on TV like Thunderbirds and Zero Tester, and combining things like Getta Robo. In my time living in Okinawa under US military occupation, I saw many soldiers, trucks, and tanks sent to the war in Vietnam, and there was the memory of damage from the battle of Okinawa in that area, so I got a strong impression of all things military. When I was a high school student I went to the US base to watch airplanes and tanks.

I watched fantasy mecha on TV as a school kid, and was surprised by the “battleship and rocket” fusion in Yamato‘s design. I have a fond memory of drawing Yamato on the school blackboard with all my might. After that, I was completely absorbed in the mecha design of Farewell to Yamato and drew copies of it every day. When I was in middle school, there was an excellent book called Gundam Century, wherein the parts that depicted ideas behind the mecha had a major influence on me. I have a feeling that’s what put me on the path (Or, rather, I should probably say it put me on the mecha path). 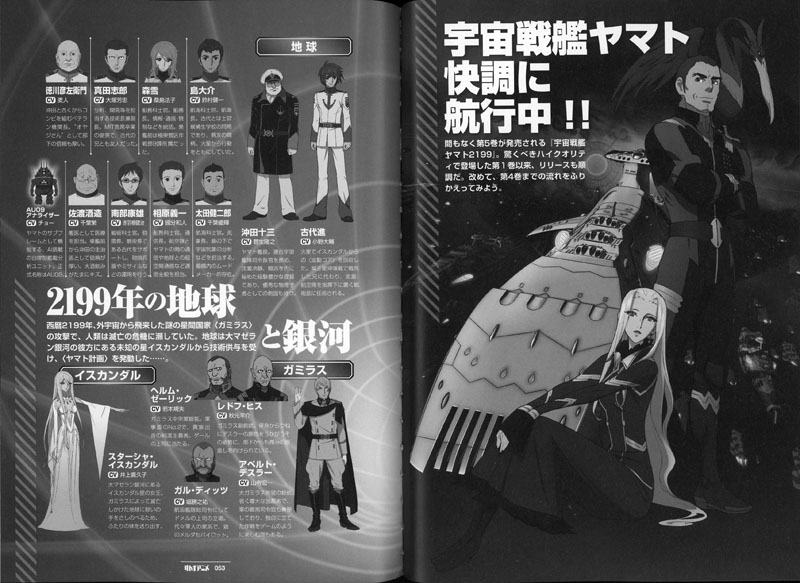 Interviewer: How did you become involved in Yamato 2199?

Tamamori: I published independent illustrations on my home page, which lead to Yasushi Ishizu (2199‘s mecha designer) and Michio Murakawa (manga artist) kindly introducing me to director Yutaka Izubuchi. After that, Mr. Izubuchi called me in when the plan got up on its feet.

Interviewer: Please talk about the specifics of your work.

Tamamori: I’m in charge of mechanical design for the Earth side, in which I do simple mecha design and supervise layouts for revision and retouching of the mecha details. Although I also do closeup depictions of the aircraft, most of my work is on the body of Yamato. Since the mecha body of Yamato is also a set for the characters to play their part in the story, I design details as needed, such as images on screens, or repair work on the exterior deck.

Interviewer: Thanks to the large-format illustration collection [the Re: Mechanics book published in fall 2012], I have the pleasure of seeing the detailed-up state of the artwork. When you draw such things, what sort of exchanges do you have with director Izubuchi and the rest of the art staff?

Tamamori: It is referred to as detail-up design work, but it is based on the production of each episode, and [Chief Mechanical Director] Masanori Nishii chooses which scenes will be rendered in 3D. Since these renders aren’t made for closeup, I draw details to serve as model sheets. My point of contact is centralized with Mr. Hirukawa of the production staff to prevent communication problems.

Interviewer: When you do a detailed-up illustration, are you conscious of existing mecha? 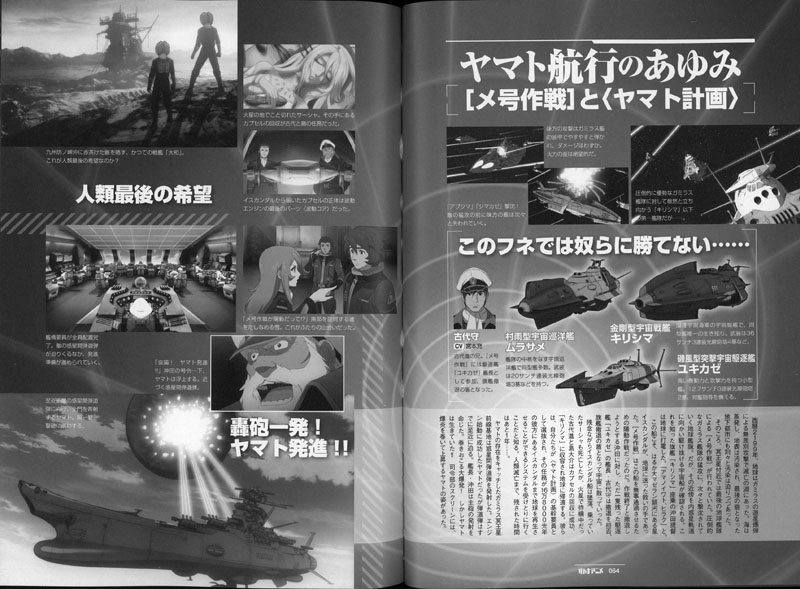 Tamamori: Because I consider this to be space machinery rather than existing machinery, I don’t do direct quotation. But I did reference the US military’s special ops (MH-60) and transportation (CH-46) helicopters, and the way details change when the duralumin parts are constantly repaired was inspirational. Unlike a severely aerodynamic supersonic aircraft, it is full of hints for space machinery.

Interviewer: Are you conscious of the designs done for Yamato in the past?

Tamamori: I analyze the design images mainly from the first series when I do my work. Of course, I don’t just look at the sketches, I’m also conscious of how Yamato was expressed by models.

Interviewer: This is jumping around a bit, but what kind of orders did you get from director Izubuchi at first?

Tamamori: Taking the main body of Yamato as an example, we decide on important points about its appearance using original sketches as a springboard for discussion, like “the waterline is between the middle and bottom torpedo tubes,” or “this is how the wings unfold in the atmosphere.”

Interviewer: Then what kind of interaction do you have with [mecha designers] Kimitoshi Yamane and Mr. Ishizu?

Tamamori: I can’t participate in meetings very often since I live far away, so I set up concepts in the early stage and do rough designs for things like the internal structure so the concepts can be shared with Garmillas mecha designer Mr. Ishizu, set designer Takeshi Takakura and others. Mr. Yamane is in charge of the aircraft cockpits and the bridges of the Earth fleet, and though we live too far apart to meet conveniently, we exchange advice and opinions, and I read and adjust the text that accompanies design drawings. I think I was helped by all the veterans. 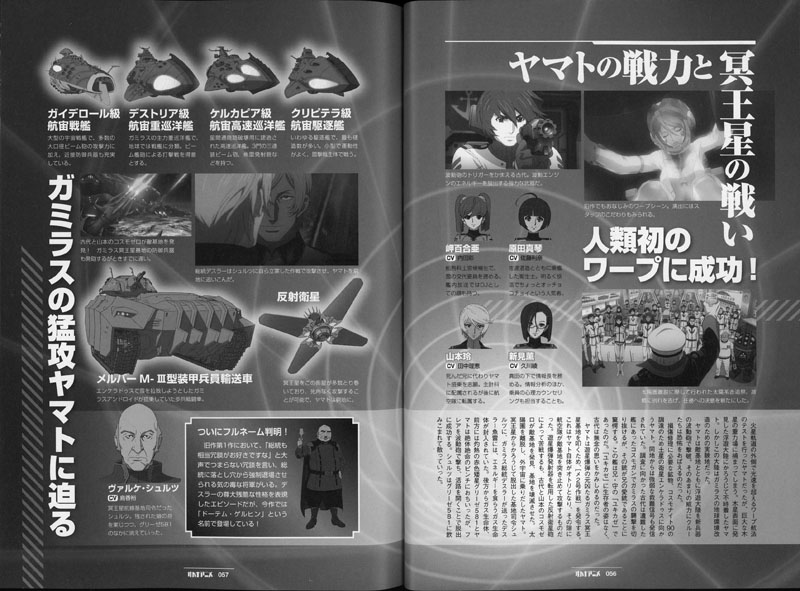 Interviewer: What do you keep in mind when you get the inspiration for a design?

Tamamori: I understand the purpose and directorial intention of design, and I’m careful about helping the staff without imposing my personal preferences on them.

Interviewer: A lot of mecha are appearing for the first time, such as the Meltoria-class Astro Battle Cruiser and the Dimensional Submarine. Do you deal with any of those?

Tamamori: In Chapter 4, I did the control room/loading device of the sub-space sonobouy in the Cosmo Seagull, and I dealt with the ejection system of the Cosmo Falcon. The hard part was the connective relationship between the seat and the backpack on Akira Yamamoto’s pilot suit. Since Mr. Yamane’s design for the pilot seat was well thought out, I supplemented it with invisible parts and incorporated a balute to function both inside and outside an atmosphere.

Interviewer: What was your favorite scene in the latest volume [Chapter 4]?

Tamamori: The scene where the name of the ship is written [in Hiragana characters] near the rear catapult is a favorite.

Interviewer: Other than in Yamato, which land, sea, or air mecha [planes, vessels, or vehicles] do you like? Please name a specific mecha if you can.

Tamamori: It’s the Armored Valkyrie from Superdimension Space Fortress Macross. It has the element of surprise and gains an entirely different character with its tenfold armament enhancements, and I like its balance of hard armor and non-armor.

Interviewer: What’s your favorite real-world mecha, whether current or retired? 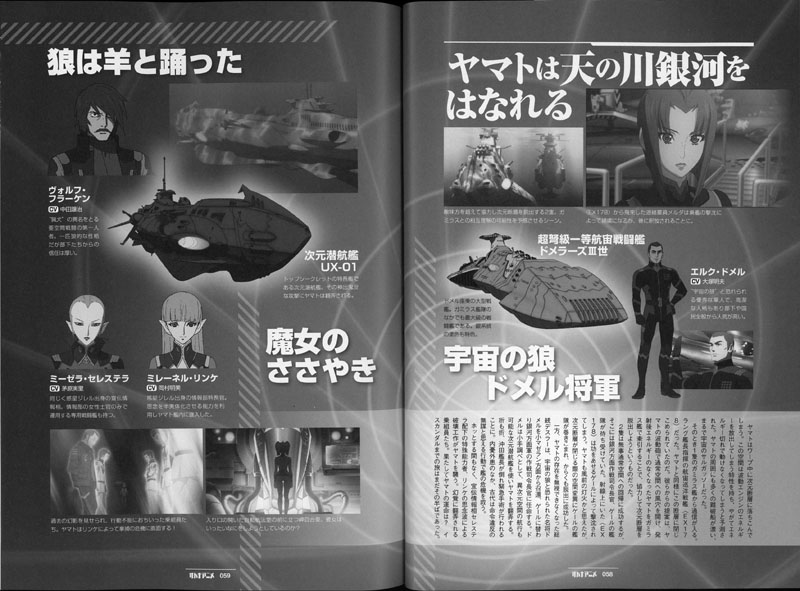 Tamamori: I like the curved surfaces of the F-4 Phantom II, which has modernity and humanity.

Interviewer: And which mecha do you like in Yamato and Yamato 2199 as a fan?

Tamamori: In the overall series, I like the Andromeda and the destroyer in Farewell, and the mid-size high speed carrier on the White Comet side. Then I like the skid attachments on the Type 100 recon plane in 2199. I like the Dimensional Submarine warship of Garmillas, too.

Interviewer: Please count up the mecha you’re working on now and in the future.

Tamamori: I’m doing designs and equipment for ships that appear after Chapter 6, but it’s still a secret.

Interviewer: What kind of job or plan would you like to try other than Yamato 2199?

Tamamori: As a designer with a directorial intention, I’m interested in the process of properly reflecting an animation image via 3D modeling for such things as toys and models, and I want to pursue that in the future. I’m also occasionally asked to do guest mecha design for other works, and I want to acquire more experience.

Tamamori: Although it’s my personal theory, considering how violent characteristics of military affairs [weapons] are connected to hobbies via technology, and how it appeals to human nature with excitement, I think it should be handled with caution in the general public, like pornography. Although weaponry has the lead role in Yamato 2199, based on the title, it has never been the entire content. As a group story centering on young people carrying the times on their shoulders, it is studded with “questions” like the original work, and I’d greatly appreciate it if you can be moved by each. 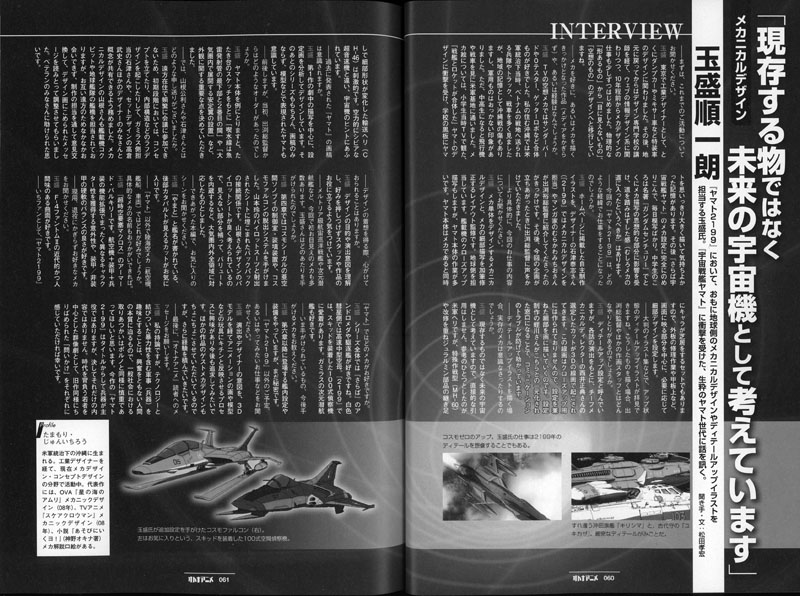