Space Battleship Yamato 2199 followed the exact same course as Resurrection in 2009 and the live-action movie in 2010; as soon as it was announced, fans instantly wanted to know who would handle the music. The reason is simple and self-evident: the music is as important to the story as the ship and characters. It’s also the most repeatable element, something you can go back to more conveniently than the anime itself. Thus it becomes a lifetime companion, and everyone was understandably eager to know more about it.

Since the production staff had the same concerns, there was nothing to worry about. The awesome responsibility was inherited by Akira Miyagawa, son of the original composer Hiroshi Miyagawa, and handled with extreme care. There’s more to be read about his personal views within this discography, so rather than belabor it here, let’s see just what this body of work adds to the Yamato legacy.

First, the bulk of it is practically a note-for-note redux of the original score, but with one important difference: stereo. The 1974 recordings were all monophonic, since it was easier and cheaper, and TV wasn’t broadcast in stereo anyway. Since everything else about the series was being modernized for the remake, it went without saying that the music would get the same treatment. Akira Miyagawa was the first and only candidate for this, and he performed his task with gusto, recreating every track from scratch and composing a substantial number of new ones.

Second, the math: the score was released in three volumes (all shown at the top of this page), with a total running time (rounded to the nearest minute) of 2 hours, 41 minutes. Of that, there are 15 minutes of opening and ending songs, another 15 minutes of tracks derived from other parts of the Yamato saga, and 57 minutes of new score. That leaves an hour-fourteen, precisely the length of the original score as contained on Yamato Sound Almanac volume 1. And it’s all in stereo for the first time!

Third, there are the songs. LOTS of them. New versions of the classic opening theme and The Scarlet Scarf were augmented with no less than ten songs from all corners of the Japanese pop music world; six new end themes for the theatrical films, one new opening and three new endings for the TV broadcast. As you will see, the subjects they cover are as wide-ranging as their performance styles.

Liner notes in the CD booklet contained an article on composer Akira Miyagawa. Read it here.

1. Space Battleship Yamato (Opening theme, Short Size)
2. Yamato Advances
3. Desperate Crisis
4. First Contact
5. The Lady of Iscandar
6. Yamato Pathetique (Strings)
7. The Galactic Route (BG)
8. The Infinite Universe
9. Sorrowful Yamato
10. The Recon Plane Takes Off
11. Yamato Sleeps Under the Setting Sun
12. Suspense B
13. Yamato Bolero
14. Sorrowful BG
15. Sorrowful Yamato
16. Theme of the Yamato Saga
17. Yamato Departs the Earth
18. May the Light of the Stars Shine Forever (Short Size)
19. Craters of the Moon (With Rhythm)
20. Sortie of The Enemy Spacecraft
21. Yamato Into the Maelstrom
22. The Scarf of Sorrow
23. Ambition
24. Silence of the Cosmos
25. The Abandoned City
26. The Black Tigers
27. The Recon Plane Takes Off (B Type)
28. Craters of the Moon
29. Suspense (Sense of Distrust)
30. Fields of Green
31. Cosmo Tiger (Wan-dah-bah)
32. Enter Dessler
33. Sad Ending
34. Pioneering Yamato Theme
35. The Recon Plane
36. YRA: Radio Yamato Theme
37. The Galactic Route (With Vocals)
38. The Galactic Route (Without Vocals)
39. Romance
40. Gamilas Anthem: Praise Be Our Eternal Glory
(With Vocals)
41. Gamilas Anthem: Praise Be Our Eternal Glory
(Without Vocals)
42. Suspense of the Crimson Star
43. Keep Watching the Stars
44. A Dictator’s Anguish
45. A Dictator’s Anguish (Strings)
46. For Those Who Know the Beautiful Earth (short size)

Note: on the day of release, music publisher Lantis issued a press release apologizing for typos in the track lists found on the back cover and inner booklet. Fans who couldn’t live with them were invited to mail in their copies (just the paper) for free replacements. The correct track titles are translated below.

The original opening and closing songs were essential to 2199‘s authenticity, and no one but Isao Sasaki could be brought in to perform them afresh. The Yamato theme opens every episode, and The Scarlet Scarf was used as the end title for Chapter 3 (Episodes 7-10). The disc contains both songs, with and without vocals. This recording of the opening theme is the full 2-verse version that stays up-tempo throughout. Following the style of the 1974 TV series, the version heard on Episodes 3 through 9 is a remix that opens with a “dirge.” This remix can be heard on the first track of OST volume 1. From Episode 10 through Episode 25, the regular TV version (first track of OST 2) is used (which was also used in various episodes of the original series), before Episode 26 reverted to the “dirge” version.

The CD release was marked by a free mini-concert by Isao Sasaki on April 27 at Sunshine City Mall in Ikebukuro, Tokyo. This event was covered in Hyper Hobby magazine #166 and is presented below. 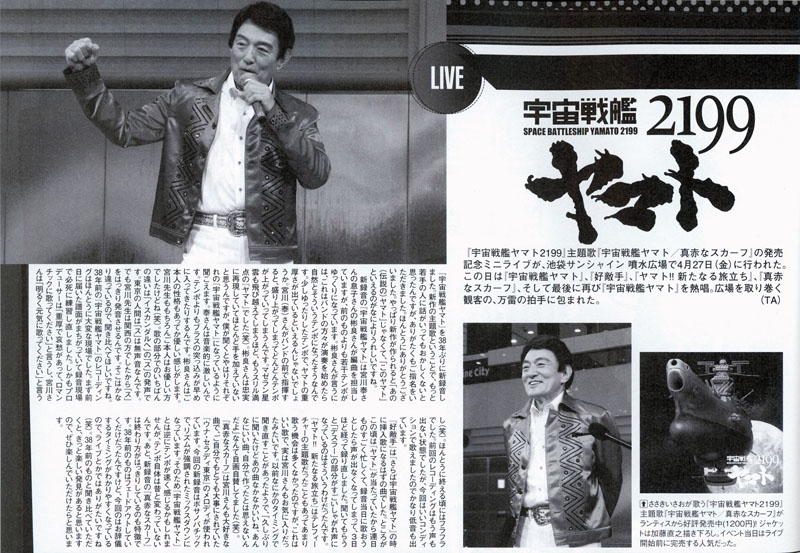 A mini-live performance to commemorate the sale of a CD for Space Battleship Yamato 2199 [containing the Yamato theme and The Scarlet Scarf] took place in the open air at the Ikebukuro Sunshine Plaza fountain on Friday April 27. On that day, Space Battleship Yamato, The Rival, Yamato!! The New Voyage, and finally The Scarlet Scarf were sung with passion and wrapped in thunderous applause from the spectators who surrounded the open space.

A new recording of Space Battleship Yamato was done for the first time in 38 years. I figured they would have wanted a younger singer to do the theme song of the new show, so I’m grateful to have been chosen. Really, thank you very much. I think that making this new production “this Yamato” as opposed to “that (legendary) Yamato” makes me happier than you could imagine.

Although Mr. Hiroshi Miyagawa’s son Akira is in charge of the arrangement for the new recording of Yamato, the tempo is slightly slower than the original. Akira said that when the band began their performance, this tempo seemed to come naturally. With the tempo relaxed a little, it could be said that it brings out the dignity of Yamato. When [Hiroshi] Miyagawa conducted the band, the tempo swelled and rose steadily. It flew over the Magellanic Cloud and was the thrill of the perfect Yamato score. (Laughs) Akira reproduced it faithfully, and I think he hasn’t revised it very much, but when I listen to it, I hear it becoming every “Space Battleship Yamato.”

Hiroshi’s music is intense. More than the tempo, the way he dives quickly into the brass. Akira brings a gentle feeling to it, which comes from his character. Naturally, Mr. Miyagawa was himself also a gentle man. (Laughs) The first message in the song is the utterance of “su” in “Isucandaru-e.” To people in Tokyo, “su” is left silent. But Mr. Miyagawa pronounced the “su” clearly because he was from Kansai. Since it is quite different there, I’d like you to compare it.

The recording of the Yamato theme 38 years ago was serious work. The first sheet music I received the day before was wrong, so I had to practice desperately at the recording site. The producer said, “sing it romantically with dignity and sorrow,” and Mr. Miyagawa said, “sing it brightly and cheerfully.” (Laughs) By the end of it, I was dizzy. For the final recording I was in a state where my voice was almost gone, but I was able to sing it in good condition this time, so the bass tones come out considerably.

The Rival was an insert song for Farewell to Yamato. Yamato was a big hit by that time, so I was extremely busy every day and my voice wasn’t coming out during the recording. When I was told we were expected to do a grueling 3-day recording session, it was hardly surprising when my voice was incredibly hoarse by the time we got to the “Dessler” part. I haven’t had many opportunities to sing Yamato!! The New Voyage since it was the theme song of the [1979] telefeature, but it’s a good song and also seemed to be Mr. Miyagawa’s favorite. When I was listening to it before for some sort of timing thing, I said, “That song sounds pretty good after all this time, I didn’t think I made such good music, myself.” I sang my own praises. (Laughs)

The Scarlet Scarf is one of Mr. Miyagawa’s best-loved tunes, and even he cherished it himself. It used the melody of [his earlier hit] Una Sera di Tokyo. This new recording’s mixdown emphasized bossa nova chic with its rhythm. So conversely, its tempo may seem fast compared to the Yamato theme, but it hasn’t changed from the old days. Also, the way it ends has been clarified in this new recording. The one from 38 years ago just continued into a fade out, but with this one it’s easier to understand the timing for when to take a bow, which I’m thankful for [when I perform it] live. (Laughs)

When you listen and compare it to the one from 38 years ago, I think it is an enjoyable discovery. I think you’ll enjoy it by all means.

This disc contains two end title themes: May the Light of the Stars Shine Forever was sung by Aira Yuhki for Chapter 1 (Episodes 1 and 2). You Who Know the Beautiful Earth was sung by Aki Misato for Chapter 2 (Episodes 3-6). The disc also contains non-vocal versions of both songs for a total of four tracks.

This was the end title for Chapter 4 (Episodes 11-14), performed by Akiko Yoshida under her stage name KOKIA (“Akiko” spelled phonetically backward in Japanese). The disc contains versions with and without vocals, and a non-Yamato song titled Where To Go My Love.

Listen to the full version of Light of Memories on YouTube here.

Steady as She Goes across the Sea of Stars

The volcanic anime theme singer Hironobu Kageyama performed this song for the end title of Chapter 5 (Episodes 15-18). The four-track single contained this and one unrelated song, both presented with and without vocals. Kageyama’s professional career began in 1981, and he has recorded countless anime themes both as a soloist and a member of the world-famous JAM Project.

JAM Project is a collective of Japanese vocalists who specialize in anime and Sentai [live-action superhero] theme songs (JAM stands for Japanese Anison Makers; “Anison” is slang for “Anime Song”). Members of this group have been performing for decades, and became widely known for their Super Robot Spirits and Super Sentai Spirits concerts in the late 90s and early 00s. Isao Sasaki, the original Yamato singer himself, is occasionally counted in their ranks. (See Sasaki perform the Yamato theme at Super Robot Spirits 1999 here)

Rest in Peace was their closer for Chapter 6 (Episodes 19-22). The disc contains this song and an unrelated track, both with and without vocals. 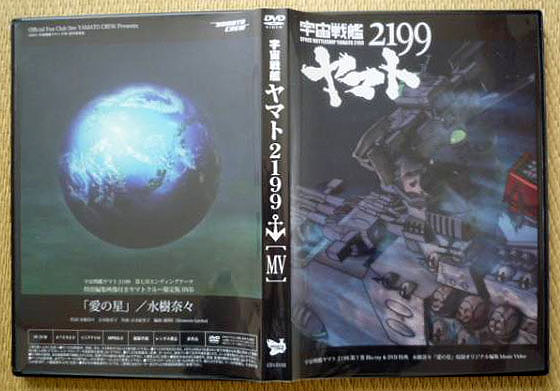 Pop superstar Nana Mizuki became the first Yamato vocalist to release a 2199 song in advance of it being heard with the anime. The song Star of Love is the end title for Chapter 7 (Episodes 23-26), and is part of her 2013 album Vitalization. The disc also contains the title track from the album, and another named Dramatic Love. This was also the quickest single of the batch to climb Japan’s Oricon charts, reaching number 1 on August 4.

Yamato Crew offered a music video for the song with the purchase of an exclusive storage box for all seven chapters. It came on a separate DVD with its own original sleeve art, shown above.

Continue to the next part: TV Broadcast songs and Live music