Those who watched Star Blazers in real time will remember all too well the “dark ages” of the program’s history, when it seemed to exist in a bubble that lasted only thirty minutes a day, five days a week. While you were inside that bubble, you knew you were having a life-changing experience. But when you were outside, it became blurry and dreamlike with very little tangible support. As the late 70s blended into the early 80s, print media could tell you all sorts of things about, say, Star Wars and Star Trek, but Star Blazers was walled off in the ghetto of kidvid, a barrier at least ten years away from being toppled.

No matter how many times you drifted through the oasis of that single 1980 article in Starlog #35 or heard tell of Yamato‘s massive impact in Japan, you had only the show itself and your imagination to fall back on. Unless you followed Hollywood trade publications.

Friend-of-the-website Robert Miller did that, and it’s thanks to him that we can take this walk through an almost forgotten part of Star Blazers history. Robert takes it from here. 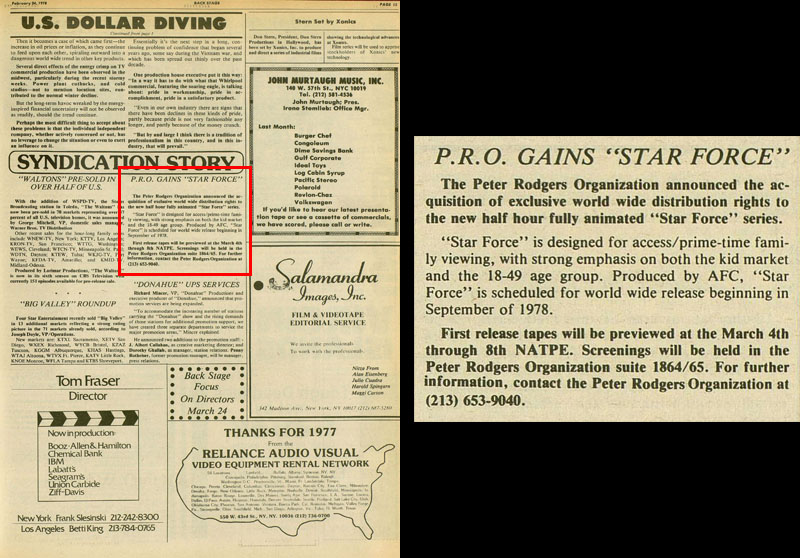 As a communications major in college I frequently scoured the trade papers for information. I was also a Star Wars researcher, collecting and cataloging articles about the film. (The project has evolved into The Star Wars Historical Sourcebook, promoted here). 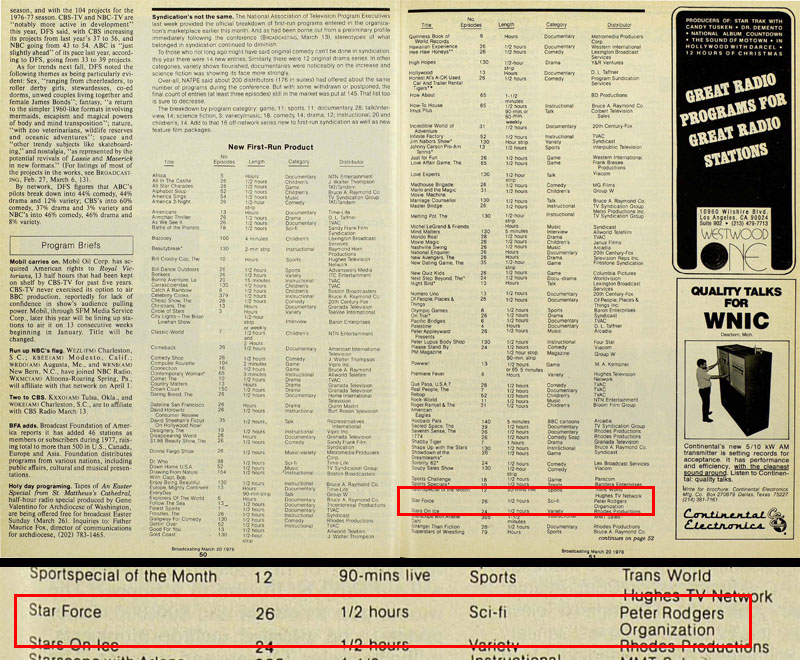 One day the ad for “Star Force” caught my eye in Broadcasting magazine. Obviously, its distributor was hoping to cash in on the success of Star Wars. And, I wondered, would Lucasfilm allow for a show with “Star” and “Force” in its title, especially since they were litigating against Universal Studios for Battlestar Galactica?

Thus, prior to its debut on September 17 1979, Claster changed the title to Star Blazers, although the Argo‘s crew was still called the Star Force. The term “Star Blazers” was shoehorned into Nova’s dialogue with Derek Wildstar in an early Comet Empire episode, reminiscing about the journey to Iscandar. 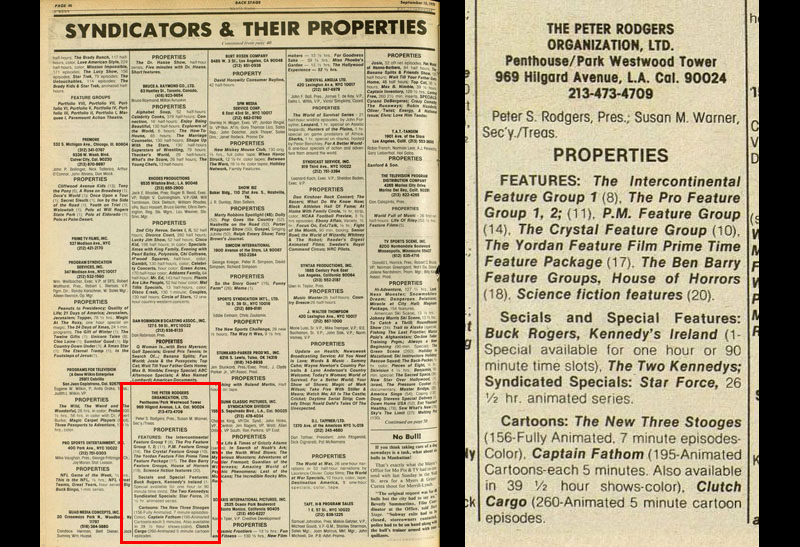 Of course I had to see the show. I loved space adventure. But in the late 70s, other than reruns of Star Trek and a season of Galactica, hardly any worthwhile space opera was produced for American television. Saturday mornings brought condescending efforts like Space Academy and Space Stars. For the real thing, one would have to return to the theater to see Star Wars. 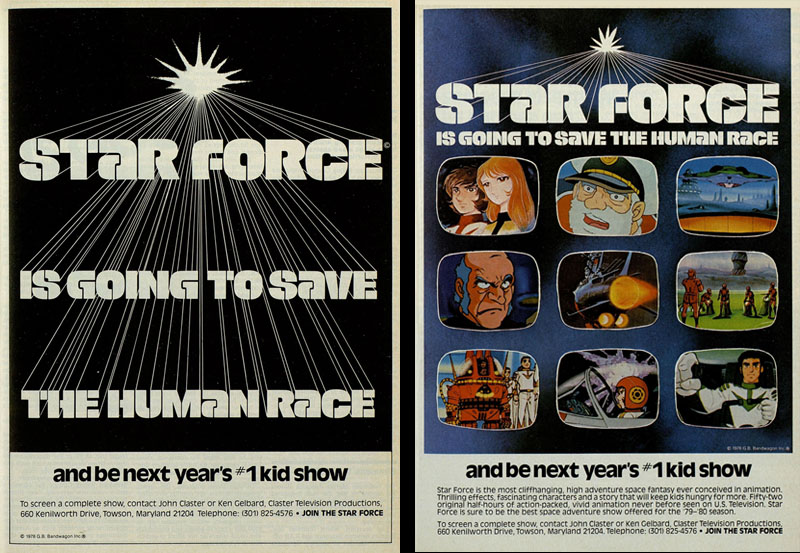 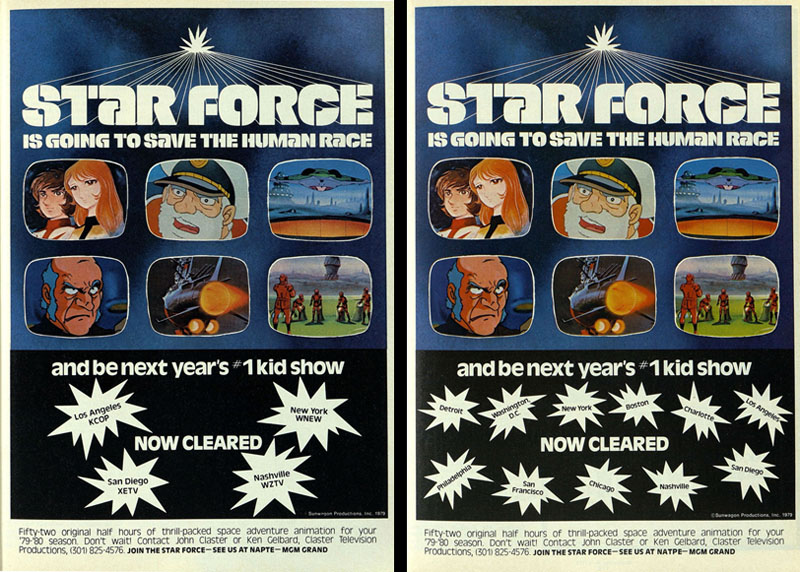 Then along came Star Blazers. Holy cow! Genocide on a planetary scale! A Wave-Motion gun that could pulverize an entire continent! People actually died! Never mind the labeling of “robots.” Audiences were smart enough to see through the censorship. We knew Dr. Sane’s “spring water” had a little more punch. We knew the battleship’s name was really Yamato. We could guess General Lysis didn’t survive his kamikaze attempt.

How refreshing to see the characters engage in romance and angst, and wrestling with concepts like honor and responsibility, and suffer the consequences for making the wrong choice. And the Japanese filmmakers dared to stage the action dynamically, animating characters and vehicles toward and away from the camera, unlike the horizontal-vertical staging in American TV animation at the time.

Though the series vanished from American TV screens after a couple years, the Star Force lives on. 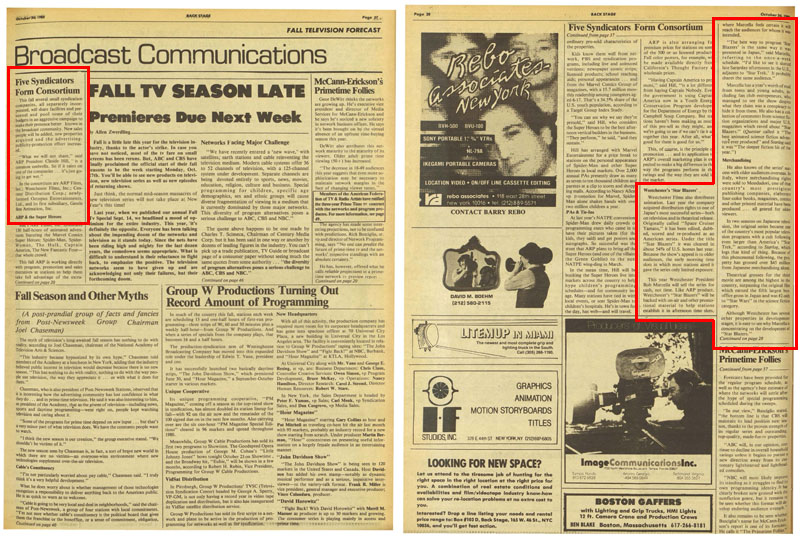 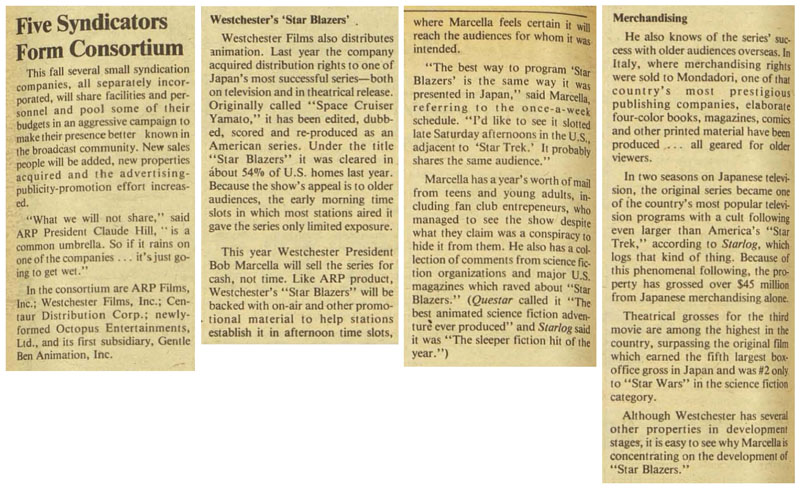 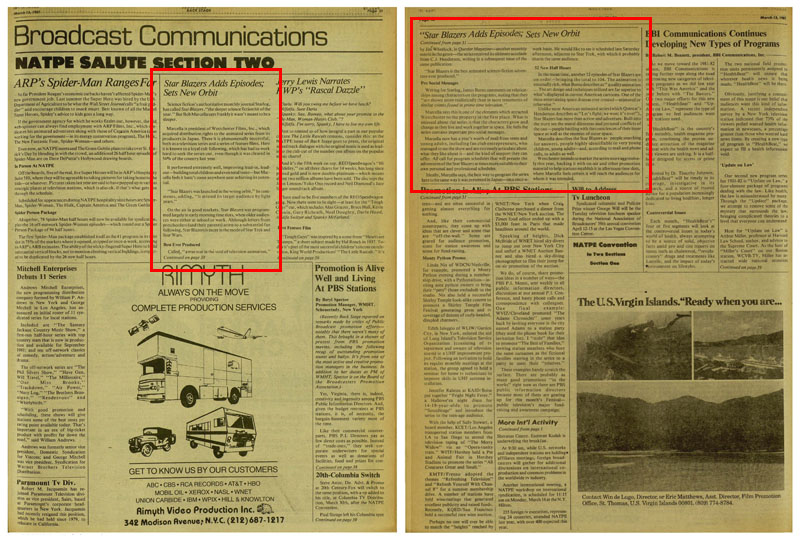 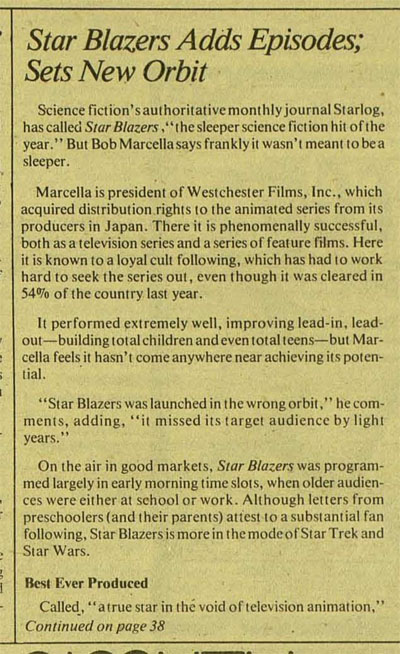 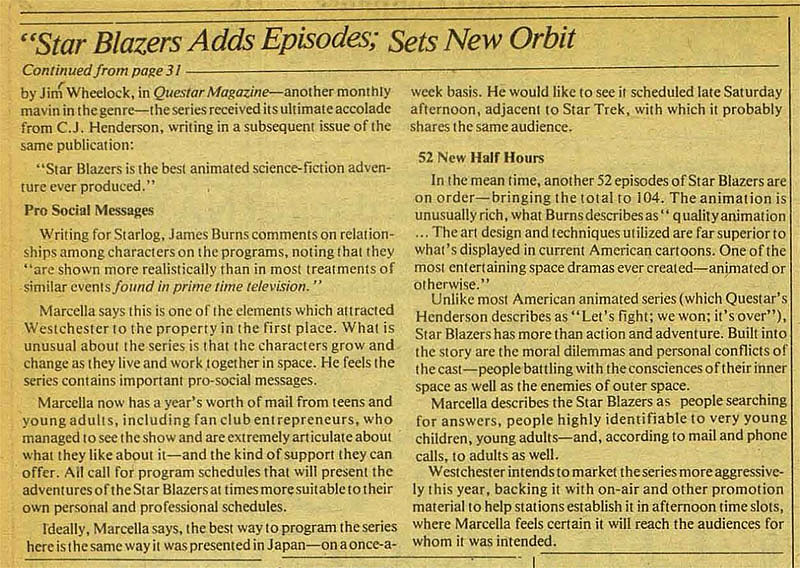 Coda: the magazines mentioned in the article above can be found here. The reference to “another 52 episodes” was about Series 3, which was originally intended for that length but was later cut down to 25.

The Peter Rodgers Organization is still in business. Read its Wikipedia entry here and visit its website here. The Wikipedia entry for Claster Television can be read here. There is a company named Westchester Films in Oklahoma, but they are unrelated to the Westchester that imported Star Blazers.