If you’re a fan who’s been watching things for a while, part of the fun in seeing Yamato 2199 bloom and develop was catching the occasional homage to the past. The animation itself was full of them, and they’ll be discussed at length once we start the episode-by-episode analysis. For now, our focus is on other clever and creative nods to the past, which proved that history was not forgotten. 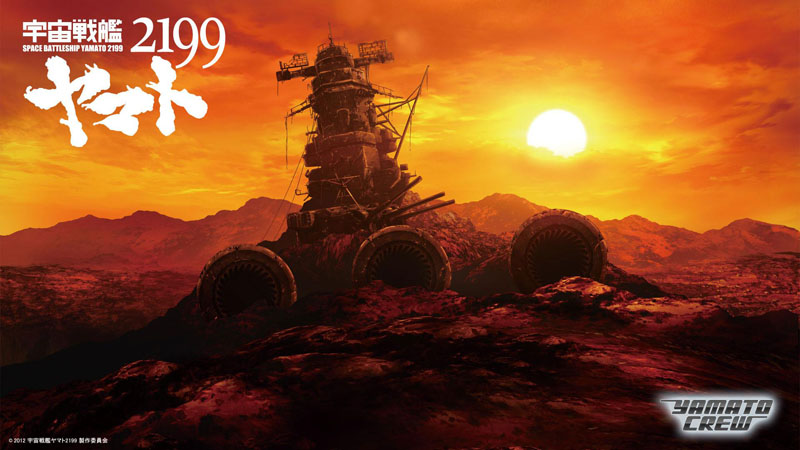 Above and below left: the first key art for Yamato 2199 (revealed on November 10, 2011) was practically a tracing of the original Yamato‘s most classic image. A still from the end of Episode 1 (October 6, 1974) is below right. 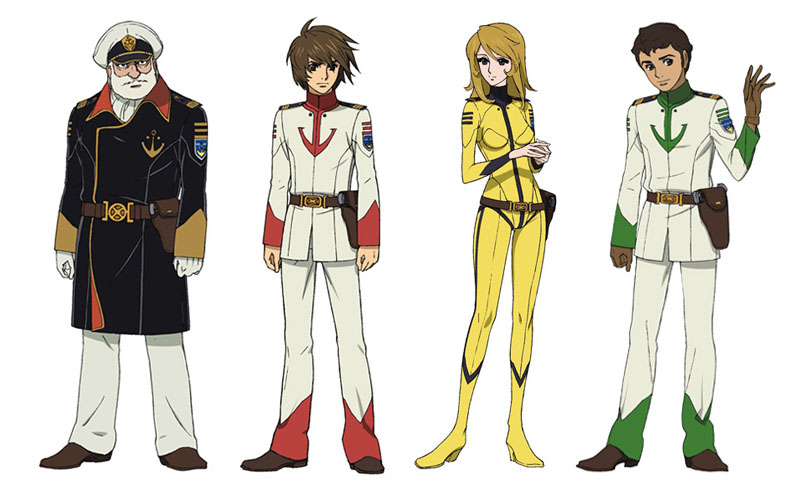 Beyond the final designs for the principal characters (first released December 1, 2011), Nobuteru Yuuki’s choice of poses was itself an homage. 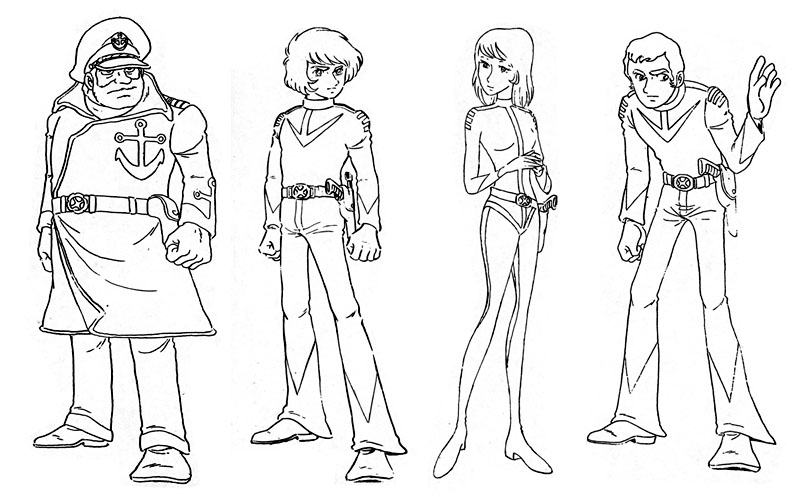 Compare them to the final 1974 designs for the characters by Nobuhiro Okaseko. 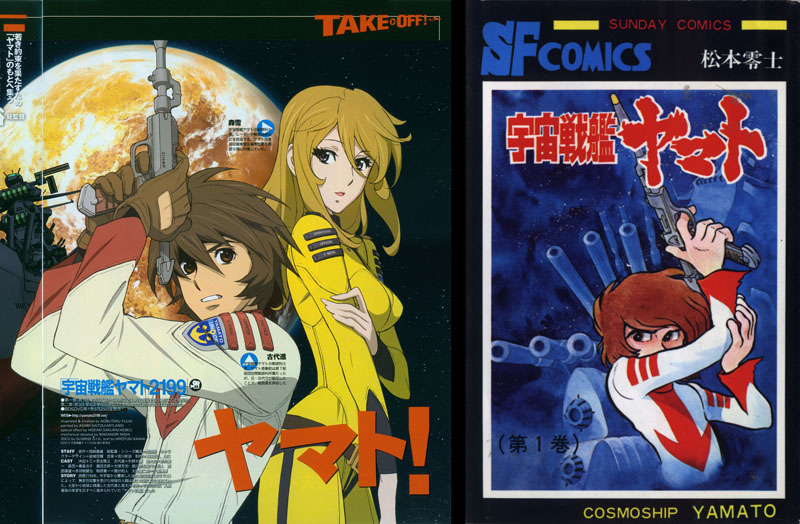 At left is a character pose that was first seen in New Type magazine (published March 10 2012) and used extensively afterward. Kodai’s pose mirrors an iconic painting by Leiji Matsumoto that appeared on the dustjacket of his first Yamato paperback manga (July 20, 1975). 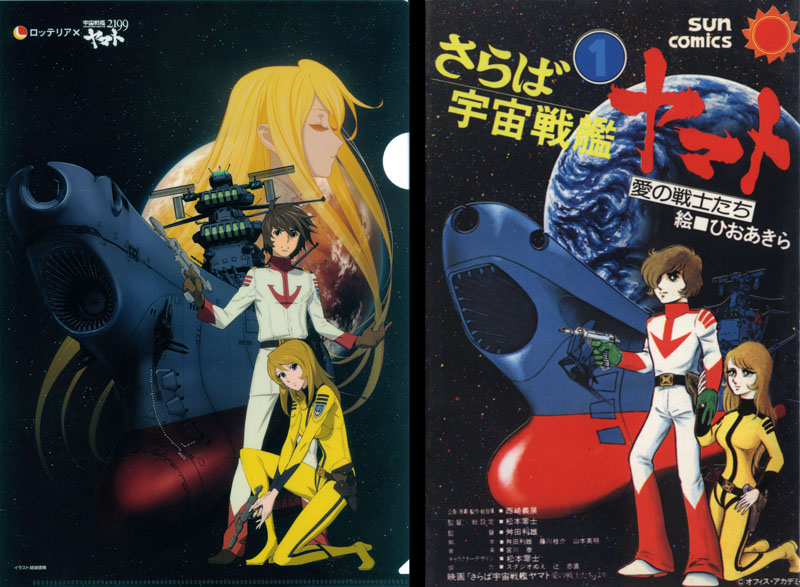 Fast food chain Lotteria released a Yamato 2199 clear file (above left) on March 29, 2012 just ahead of the 2199 premiere. Compare this to Akira Hio’s cover art for his first Farewell to Yamato manga volume (September 10, 1978).

Above left is a cutaway of the 2199 Yamato, first seen in Architecture Knowledge magazine, published May 19, 2012. There are plenty of cutaway drawings from the old days (see a complete collection here), but two in particular stand out for their similarity. The one shown above right appeared in a book titled Farewell to Yamato Cel Collection Part 2 (April 15, 1979). 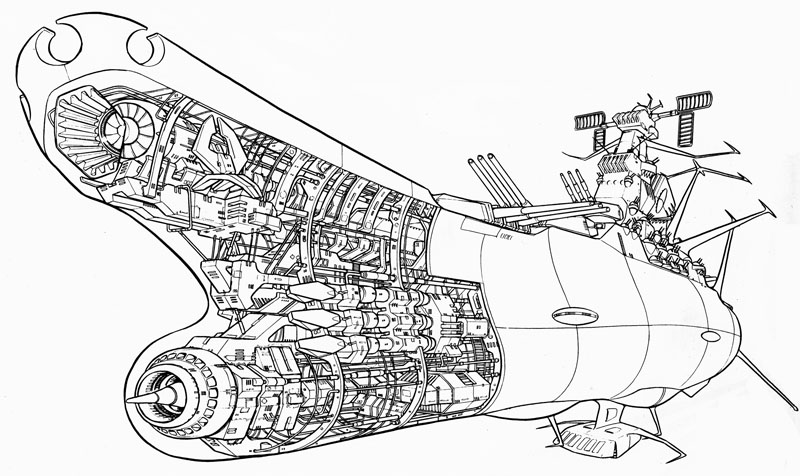 This drawing by Katsumi Itabashi bears an even stronger resemblance; it first appeared on the Yamato 2 Roman Album’s cover (March 30, 1980).

Yamato fans went even farther than the pros to pay their respects to the past. Above is a trilogy of doujinshis (fanzines) that were published at the Summer 2012 Comiket. 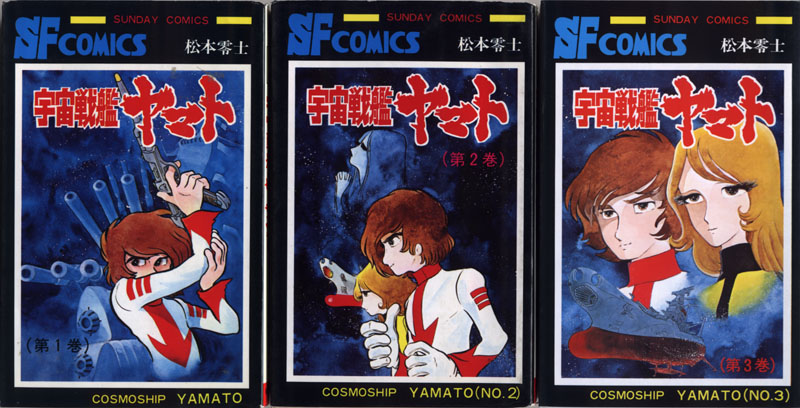 For comparison, here are all three volumes of Leiji Matsumoto’s Cosmoship Yamato manga, first published between 1975 and 1980. 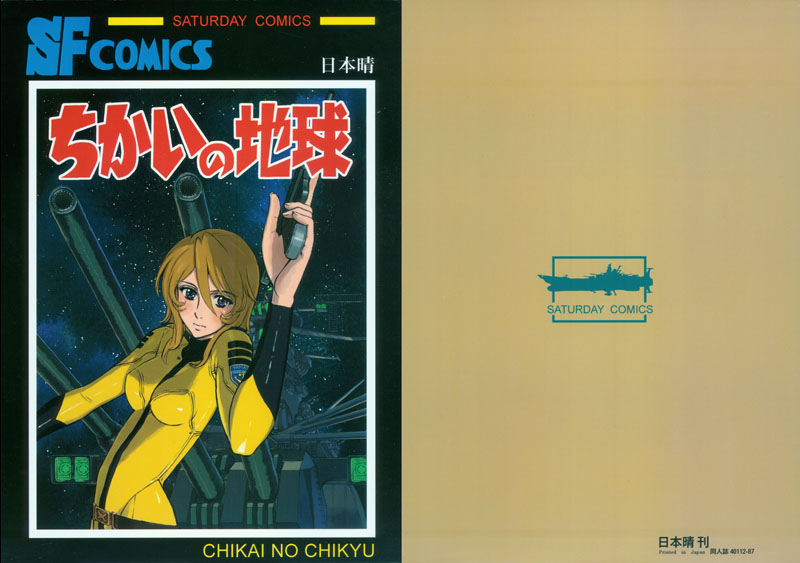 The homages didn’t stop at Yamato itself, either. This doujinshi, titled The Promised Earth, was published at the Winter 2012 Comiket. It was an art jam headed by Yamato 2199 manga artist Michio Murakawa.

The homage was to a 1961 baseball manga titled The Promised Pitch, created by Tetsuya Chiba, who would later go on to create the famed boxing manga Tomorrow’s Joe. 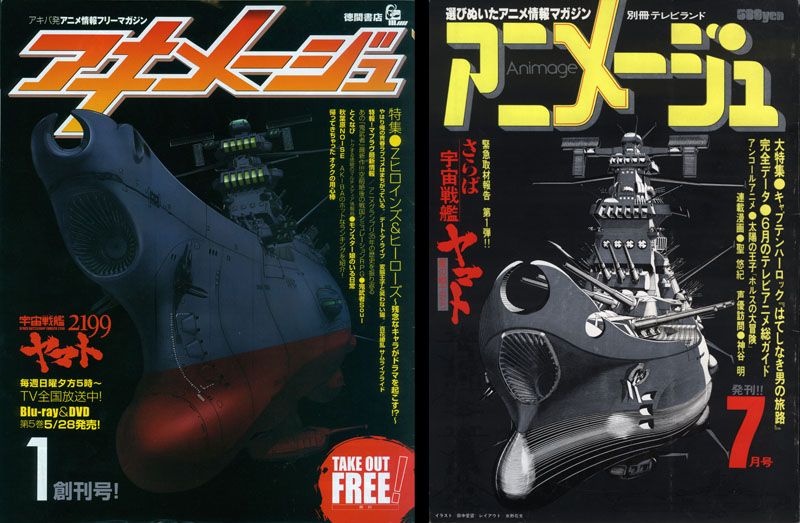 At left is the first issue of Akimage, a free promotional magazine from Tokuma Shoten that was distributed in Akihabara on May 10, 2013. Inside, they fully admitted to borrowing from their own history; at right is the cover of Animage #1, which Tokuma published in June 1978. 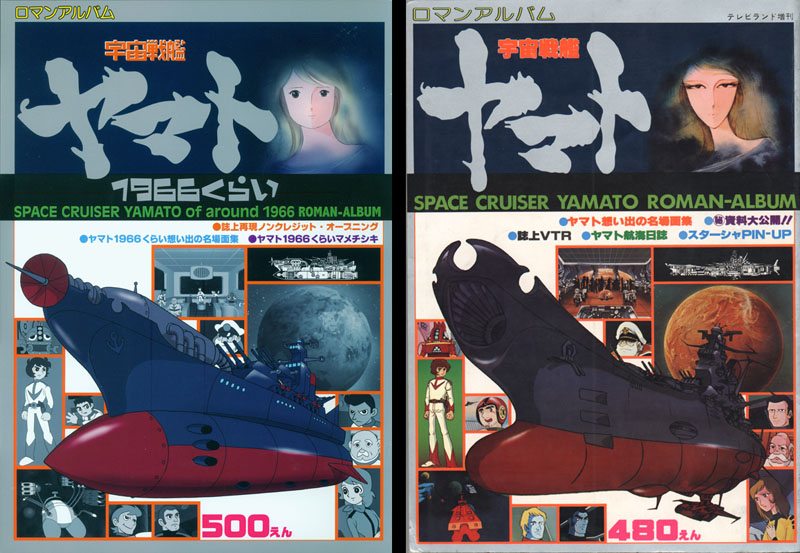 An even stronger throwback was the lovingly-made parody doujinshi Yamato Circa 1966 (above left). Published August 2013, it was a direct takeoff of the original Space Battleship Yamato Roman Album from September 1977. Read more about Circa 1966 here. 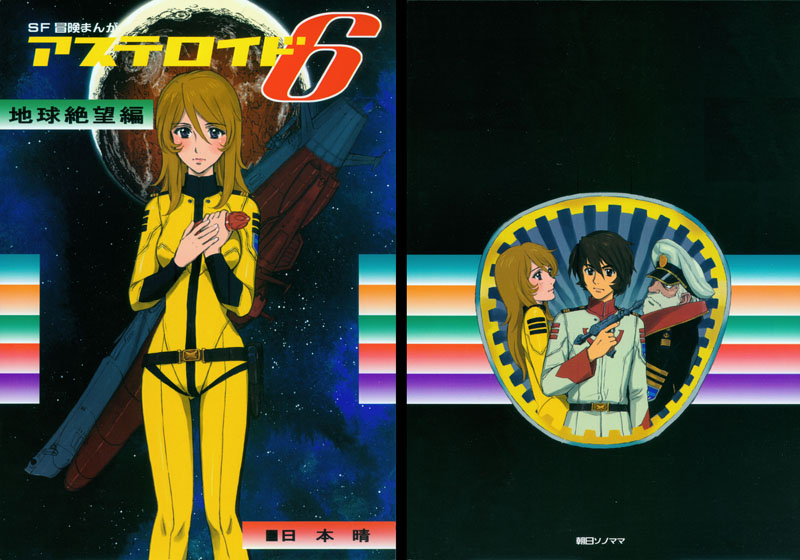 Michio Murakawa struck again with another art jam doujinshi at the Summer 2013 Comiket. Asteroid 6 was one of Yamato‘s many working titles in the early days of development, but the graphic design was a throwback to something slightly less eclectic… 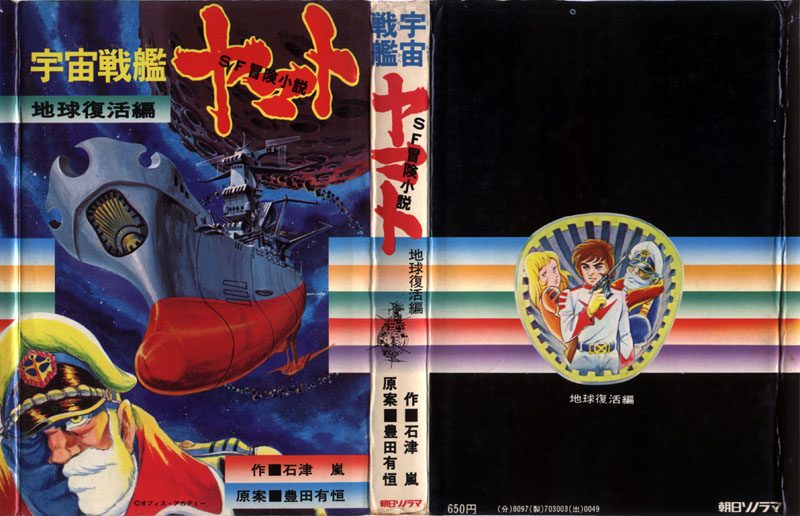 Shown here is the dustjacket for volume 2 of the first Yamato novelization, written by Arashi Ishizu. Titled The Recovery of Earth, it was published February 3, 1975, and contains a very different version of the story. Read about it here. 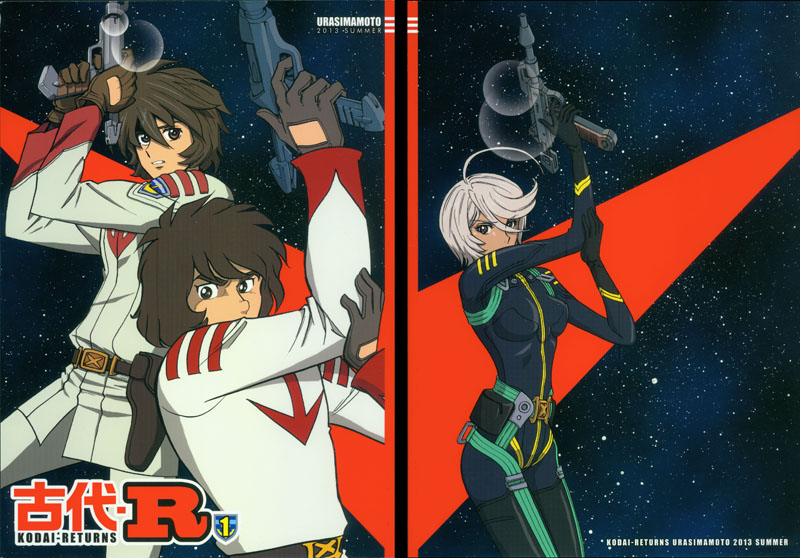 Another professional manga artist did his own doujinshi tribute; Ura Shimamoto published a 2-volume story called Kodai Returns, in which the original hot-blooded Kodai swaps places with his 2199 counterpart (during a warp accident) and has to retrace his steps to Iscandar under different circumstances. You should recognize the source for these poses by now. The two volumes of Kodai Returns were published at the summer and winter 2013 Comikets. 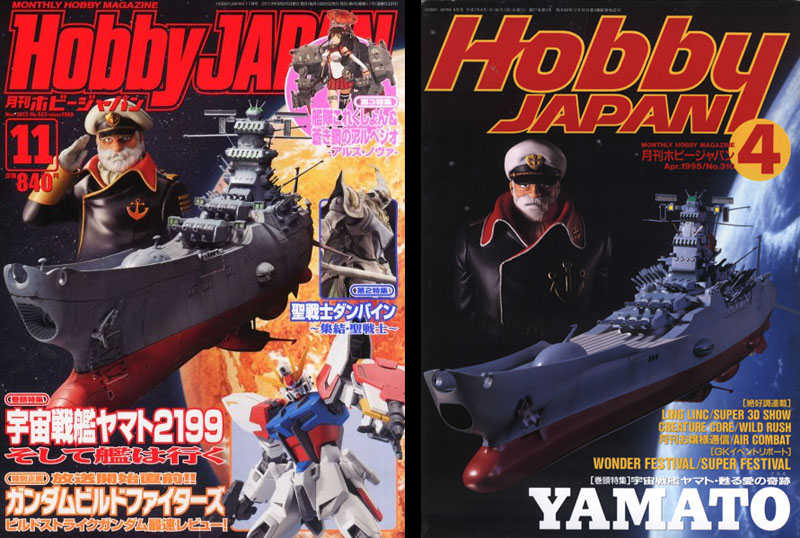 Hobby Japan played its own game of do-you-remember-this when the November 2013 issue (published in September) mocked up a previous cover design from their April 1995 issue.

From another part of the hobby world, we find these two complementary pieces that adorned Bandai model kit boxes created 40 years apart: the original 1974 Analyzer and the 2014 Analyzer could be dancing a duet here. The use of similar angular elements in the background is another subtle gesture. 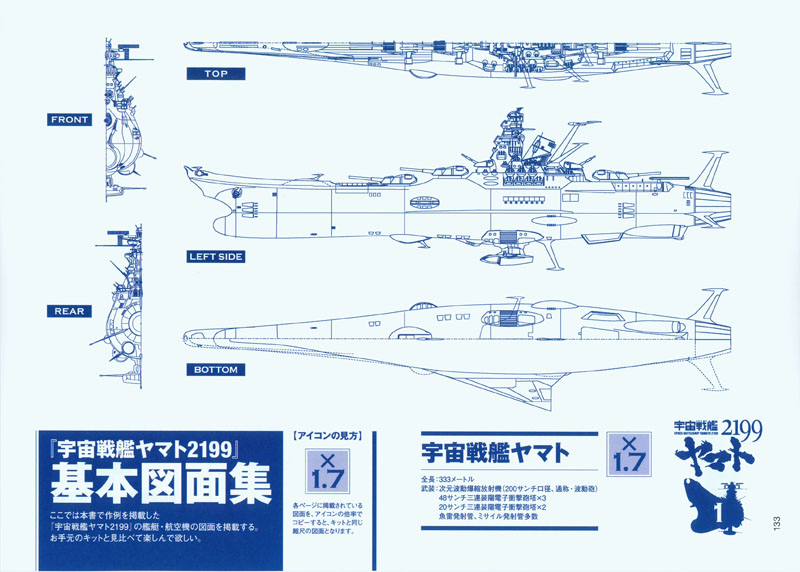 Finally, this example deserves an award for elegance. Dengeki Hobby magazine published its first (of two) Yamato 2199 “Modeling Guides” on September 30, 2013. In the back were ten blueprint pages that profiled ships seen in the book. 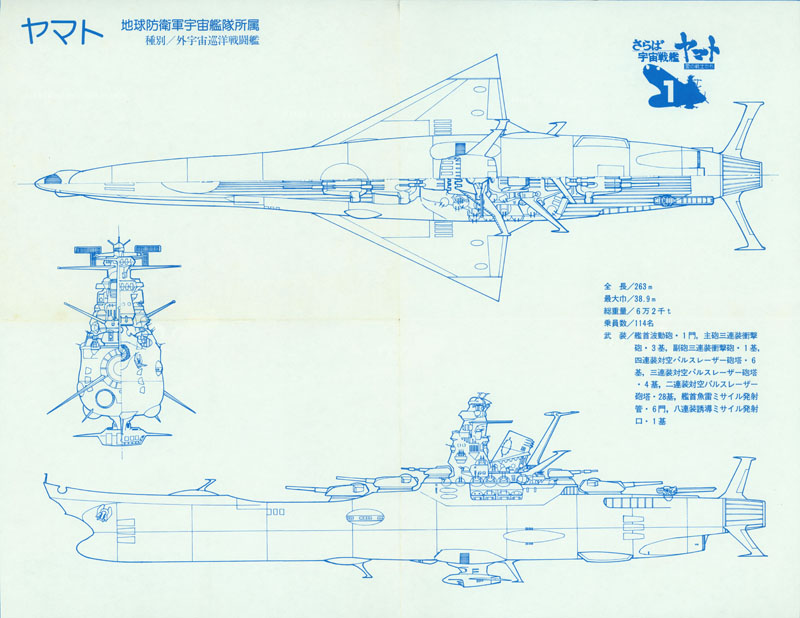 These were based on a previous set of blueprints published in September 1978 titled the Farewell to Yamato Precise Illustrated Edition, which included 16 foldout blueprints.

If you look closely enough, you can always tell when fans are in charge.